We went for a drive in the new Mercedes G-Class 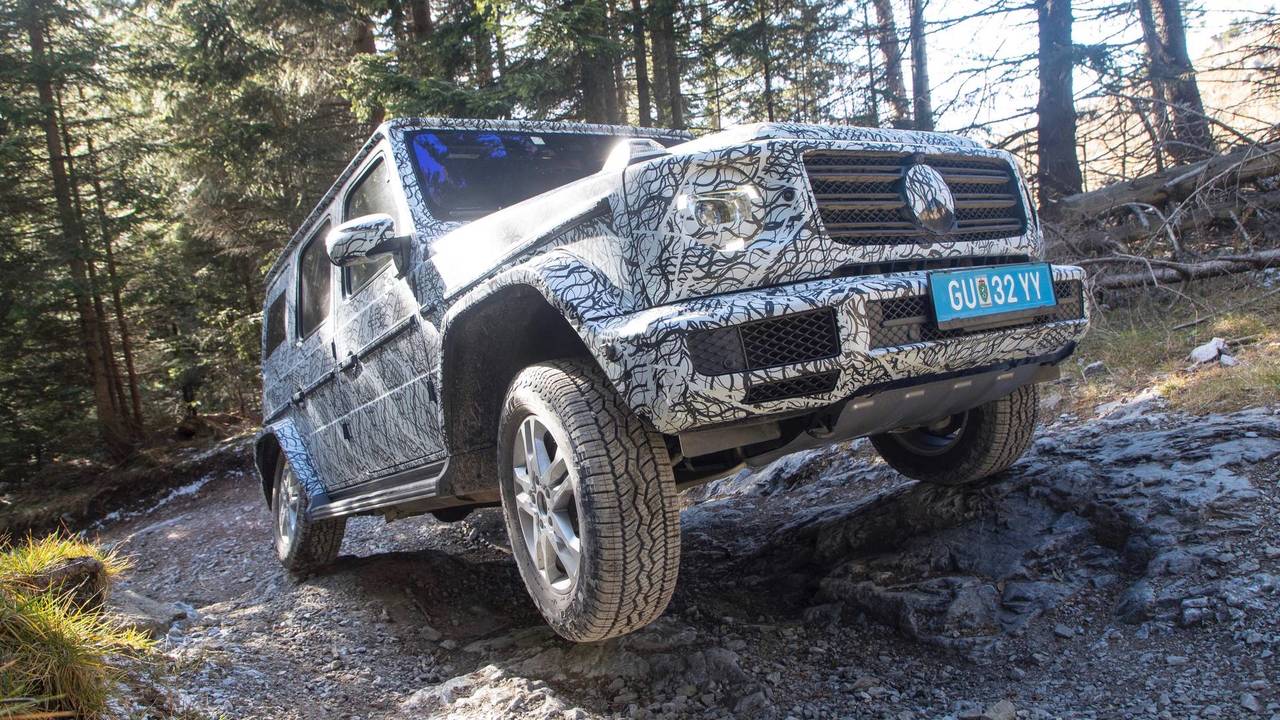 Shotgun in the latest G-Wagen.

The Mercedes-Benz G-Class just turned 39. It’ll not make 40, as, this year it’s being replaced. Yes, Mercedes-Benz will replace the military-derived, hand-built-in-Austria sales anomaly with an all-new model in 2018. We’ll see it officially in a few weeks' time at the Detroit Auto Show, but Motor1.com has spent a bit of time in it prior to that, at Schöckl in Austria – a 1,445m-high mountain where the original G-Class was developed.

We’ll admit it here – we’re riding shotgun, so there’s a grab-handle in front of us instead of a steering wheel. That handle, like so much of the new G-Class, has caused a lot of trouble for the team who created the car. Their goal was to fully retain the authentic look and feel of the outgoing car, but in an all-new and improved package. They could have put the grab-handle somewhere else, where it didn’t interfere with the airbags. Likewise those iconic indicators on top of the front wings. To get them to pass pedestrian protection tests meant engineering them to collapse into their housings. No mean feat, but then developing the new G-Class has been anything but easy.

You might struggle to believe this, but it’s genuinely all-new: Oliver Metzger, head of development on the G-Class, admits he’s counted the parts that share the same part number over the old car...and it's five. They are the rear-wheel cover, the towbar, the headlight washers, the sun visors and the button that opens the door. The level of obsession to recreate the old feel is clear, Metzger saying they spent ages working on the sound and feel that the door locks made. Open the new door, then try the old one and they’ve achieved it – impressive when you consider that the body is now largely aluminium.

‘The G-Class, but better’ – that was the goal, and parked alongside the old that’s clear. Even wearing a swirly wrap, it’s obviously G-Class, though there’s a noticeable stretch in the wheelbase, allowing it both better crash protection and improved passenger space. It’s still body on frame, ancient tech in the world of SUVs, but then the G-Class isn’t an ordinary SUV – and anyone who knows about off-roading will testify that it’s better in the mire because of it.

There’s sophistication in the mix, here it’s powered by the same 4-litre turbocharged V8 engine found elsewhere in the Mercedes-Benz line-up (and related to AMG’s version) mated to a nine-speed automatic transmission. There’s electronic control of the three differentials, optional adaptive suspension (still proper metal springs, air springs apparently not being robust enough) and a low-ratio transfer box. All that, combined with the new ‘G-Mode’ allows the new G-Class to shrug off even the most challenging tracks around Schöckl.

There’s a new independent front axle to help, more links on the new rear-axle and a steering system that, unlike the old recirculating ball setup of the old car, goes where you point it. What’s obvious when we're driving is that Metzger isn’t anywhere near as busy as he would be in the old one, both off-road and on the short sections of tarmac that punctuate the tortuously rocky sections. There’s civility then, thanks to those new axles, the rack-and-pinion steering and the body and frame’s greater stiffness – to the tune of about 50 percent.

That it’s a benchmark vehicle off-road was one of its development goals, and certainly the sophistication of that suspension is obvious. I’ve sat in competition off-roaders that would struggle to retain the sort of wheel and body control the G-Class exhibits here, even at very unwise speeds on horrific terrain. The way it rides is genuinely remarkable, yet on the smooth stuff there’s control and compliance where the old car would be a busy, uncomfortable disaster. That’s been key, admits the team behind it, nobody denying that the outgoing car had its faults.

Not that it dented its appeal – indeed, 2016 saw a record 20,000 find homes, an incredible number for a car so ancient, expensive and – let’s face it – compromised. Dr Gunnar Güthenke, head of G-Class at Mercedes, admits the new car will likely appeal to a wider audience, because with the compromises removed it can be more readily used as a daily driver rather than an occasional plaything.

Replacing it has, says Güthenke, been a tough job. Retaining the iconic looks, shape, and even the hand-built production, in Gratz, Austria, has required a great deal of effort. The G-Class is now modern inside, the only time an old G-Class had screens as big as those in front of the driver in the new one would have been on a trip back from picking up a new television. This G-Class will be able to park itself, drive semi-autonomously and provide all the comfort, convenience and safety equipment that is now the norm on Mercedes-Benz’s most luxurious cars. Getting those systems to work wasn’t always simply a case of plug-and play, due to a number of reasons.

The different shape and dynamic behaviour of the G-Class caused some issues for cameras and radar sensors. Metzger admits that 'we now have four cameras on the car so the new G-Class can do automatic parking. But what happens if the customer pushes the button for the differential lock while doing so? On the one hand we take carryover systems from elsewhere in the production cars, but we have to make them work with G-specific elements. The compatibility of the systems is difficult.'

Güthenke also admits that Mercedes could have built the new car somewhere cheaper, but that wouldn’t have been authentic, likening the G’s production to that of a Swiss watch – where it’s built being an important part of the overall package. What nobody is denying, either, is that the success of highly visible models like the 4x42, the AMG 6x6 and Maybach G650 Landaulet means there’ll be specials in time, the team saying it has ‘ideas’ where to go with the car. Certainly there will be AMG versions alongside the standard V8 petrol and diesels – the AMG models, mad as it sounds, being big sellers.

Whatever, we’ll see it properly in its flat-sided, exposed-hinged and push-button-handled glory in a week or so at the Detroit Auto Show. Don’t expect any surprises on how it looks, there, but on evidence from our early ride, the revelations are in how it drives.