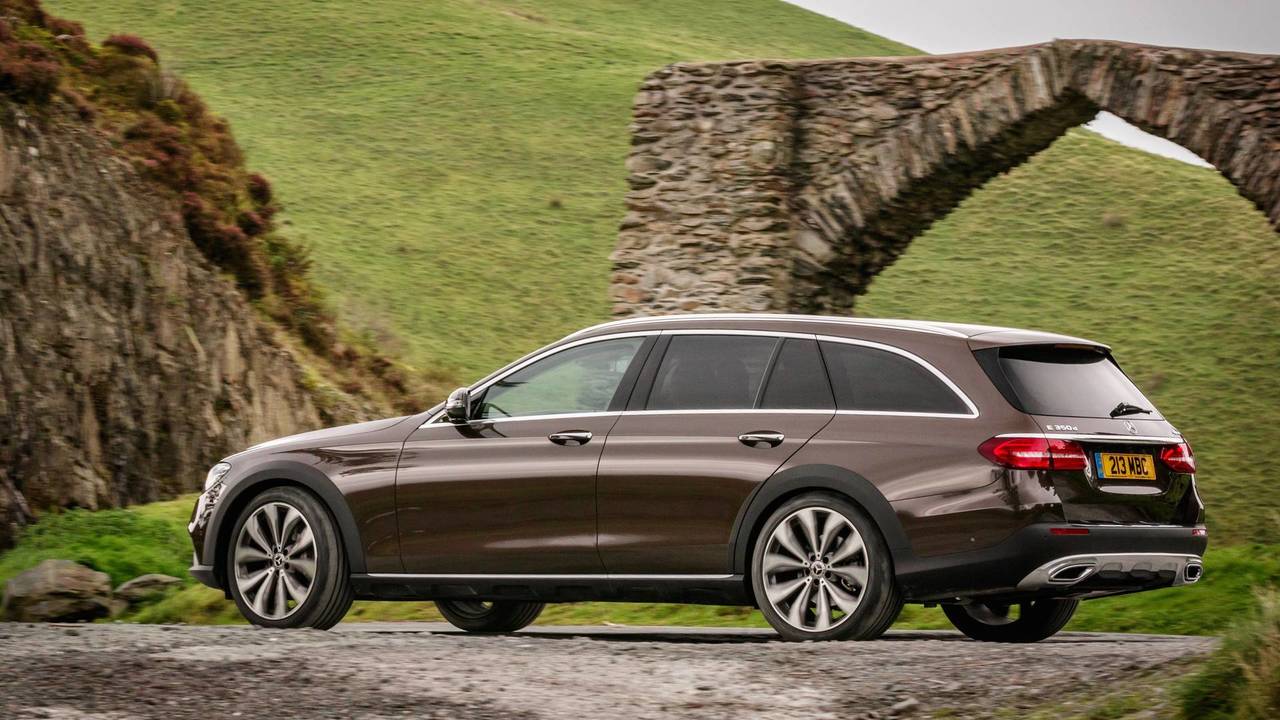 Don't want to jump on the SUV bandwagon? The All-Terrain delivers a capable alternative.

The mass exodus into SUVs is in full swing with many trading their family battle bus in for something far trendier. But where does this leave the humble estate car? Once the default choice for dog owners everywhere, sales have slumped and their very existence questioned.

This Mercedes-Benz E-Class All-Terrain takes the fight to the invaders, albeit at a rather eye-watering price of nearly £59k – some £9k more than a high-spec Volvo V90 D5 Cross Country, and £2k over an Audi Q7 3.0 TDI S Line. So the competition is strong, and on first glance looks somewhat better value. Still, this burly, all-seasons E-Class shouldn’t be dismissed just yet…

You might buy an SUV over an E-Class Estate because it has all-wheel drive and better ground clearance, an asset when leaving the beaten track, but the All-Terrain has got this covered.

4Matic all-wheel drive is standard meaning that come rain, shine or muddy stable yard, you’ve got the traction you need. At rest the car already sits 29mm higher than the regular model, but engage the Air Body Control air suspension and 35mm can be added. Truth be told, this gives the Merc better off-road credentials than many of the SUV pretenders in the Waitrose car park.

What about the looks? That’s another big reason the SUV has surged in popularity. Well, the All-Terrain has been made to look meatier with plastic cladding, large 20-inch alloy wheels and a more purposeful grille. It still retains the elegant lines of the standard car, but it now packs a bit more visual muscle.

Inside it’s business class as usual. The spacious interior will be familiar to current E-Class owners,  with its wide display screens and sculpted dashboard. High quality materials line the cabin and mood lighting further promotes a classy feel. Exclusive to the All-Terrain is an aluminium-carbon trim that looks and feels expensive.

The All-Terrain is its own trim level, in fact, and comes with just about everything you could want including that 12.3-inch multimedia screen, a panoramic glass sunroof, and an electrically-retractable tow bar that’ll enable you to pull up to 2,100kg, all of which goes some way to justifying that lofty price.

Something else that comes standard is acres of space. Adults will happily spend lengthy periods in the back, providing they have the outermost seats, and 670 litres of boot space will easily accommodate the family’s winter getaway gubbins. Mind you, there’s no option of adding seven seats, as you can in some E-Class models – the All-Terrain (and in fact all the four-wheel drive E-Class Estate models) are five seat only.

The E-Class All-Terrain can only be had with a 254bhp 3-litre V6 diesel, paired with a nine-speed automatic gearbox. It’s a strong motor with 457lb ft of torque to be taken advantage of both on and off road. It’s not the most refined diesel out there, but it’s more civilised than the weaker four-cylinder 220d in other Mercedes.

Leaving the asphalt and selecting the car’s All-Terrain mode reveals a very capable vehicle to go exploring in. The boosted ride height means that it can clamber over obstacles that would leave plenty of cars without an underside. It’s no Land Rover Defender, but it’ll do far more than your average owner would ever ask of their car, and it promises to lope over rutted tracks and boggy fields with smug-inducing ease.

Returning to the road, where this car will spend the majority of its life, it’s immediately clear that the All-Terrain hasn’t sacrificed much of the E-Class’s tranquility. The nine-speed automatic gearbox glides through its ratios without fuss, and external noise is well suppressed at speed. Its suspension emits a thud when tackling potholes, but the actual impact is well absorbed. The large 20-inch alloys that are standard on the All-Terrain likely don’t help.

Through faster bends there’s a bit of body roll and the steering could do with a bit more weighting, but the plentiful grip makes this E-Class feel secure and composed.

For those who don’t want to join the herd in buying an SUV, the humble estate car is still a sound choice. The E-Class All-Terrain is certainly a match, or in many cases surpasses, the crossover alternatives, and it also often delivers better economy and driving manners. Given the E-Class’ vast boot, it’s a more practical option than plenty of SUVs, as well.

The cost? Well, the E-Class All-Terrain is designed to be a one-tick car. You’ve got everything on it as standard, and you’re probably not too worried about the bottom line anyway, so much as the convenience and luxury on offer. And if you spec up an Audi Q7 or BMW X5 to the same luxury-laden spec level, the All-Terrain will suddenly look like good value, so there’s always that perspective to consider.

Just check out the Volvo V90 D5 Cross Country before handing over your £60k to Mercedes. Even after you’ve specced the Volvo up to include the tow bar, 20-inch alloys, glass roof, air suspension and all the luxury gubbins, it’s still some £4k cheaper than the Merc, and the V90 actually tows a bit more at 2,500kg. Mind you, it’s a four-cylinder engine and it doesn’t have quite the off-road ground clearance of the E-Class.

Ultimately, expensive as it is, Merc’s off-roading estate just about justifies its price. If you have your heart set on a rugged estate, the E-Class All-Terrain is one of the best.