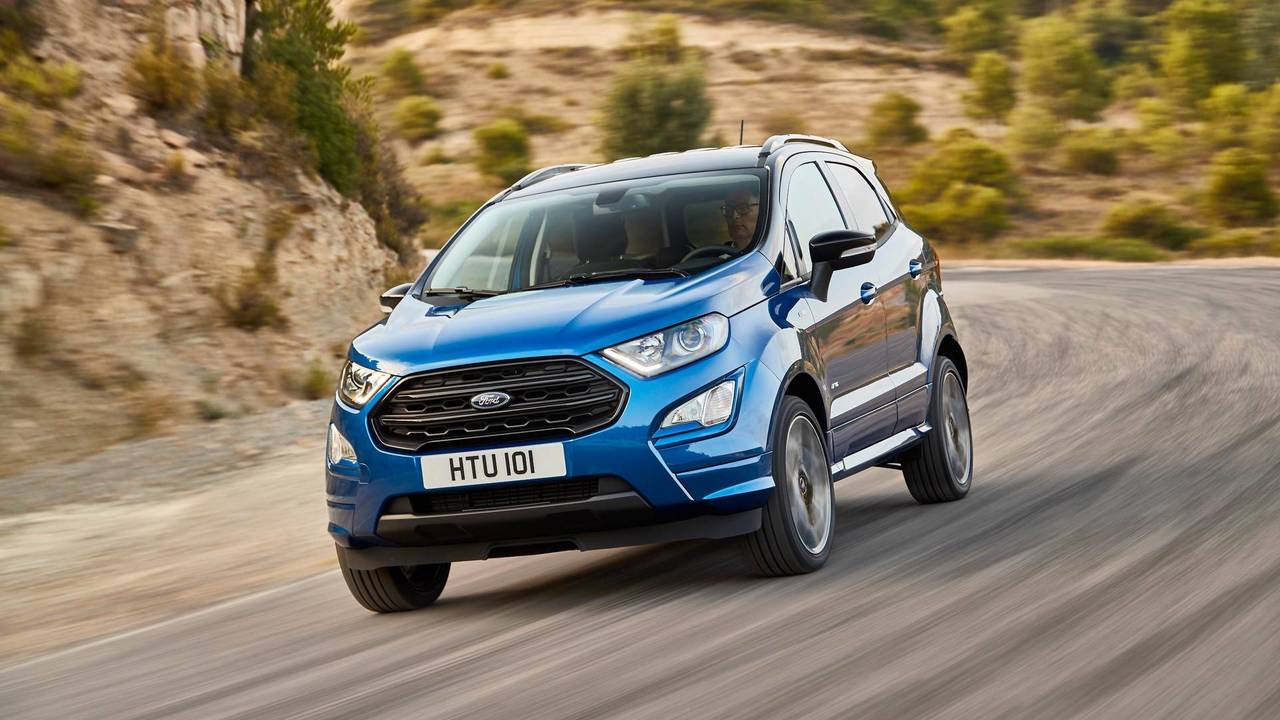 Europe-specific changes can only take this world car so far.

This is the new Ford Ecosport. Except it’s not really that new, it’s really more of a facelift of the old one, which didn’t get very good reviews and so Ford would like you to think that it’s new. It’s all terribly complicated. But if Ford wants us to think that everything is different then we should give the car the benefit of the doubt.

The Ecosport is one of Ford’s ‘world cars’ – car makers can save money by selling the same car around the globe rather than building them in smaller numbers for specific markets. It was originally conceived for the Brazilian market, and production of this new European model has been moved from India to Romania.

The Europe-specific styling works much better – there are nice, subtle touches around the exterior that make it look more stylish, and the cabin is also a marked improvement both in terms of quality and practicality. There are loads of places to store things – a drawer under the passenger seat, a sliding armrest between the two front seats and a great bottle bin that uses the space available in the door panel.

Back on the outside, the frankly ridiculous side-hinged door remains. You won't find any rival – not the Seat Arona, Renault Captur, Nissan Juke, Hyundai Kona or Kia Stonic, to name a few – with such a frustratingly impractical boot opening.

Actually, the latest version of the Ecosport is an improvement. The quality of the cabin is better – admittedly there are still some dodgy areas, but who spends their time in a car caressing the dashboard?

The tech has been upgraded with the latest features from the (definitely) all-new Fiesta, so you get a fancy tablet-style 8-inch infotainment screen glued to the dashboard from Titanium-spec upwards. Entry-level Zetec cars get a much less appealing 6.5-inch number that misses out on navigation. Best leave that one to the car rental agencies.

Ford makes much of the sporty design cues on the range-topping ST-Line model, but we think the Titanium-spec car looks much better with a little pseudo-4x4 cladding around the bottom of the bodywork that disguises some of the car’s odd proportions. The ST-Line car comes with a contrasting roof as standard – there are some hideous combinations possible, some really work and others just don't. Base colours are blue or red and after that you'll find yourself paying anywhere between £250 and £725 for a range of hues.

The Bang and Olufsen sound system is definitely worth considering at £300, as are the heated seats and steering wheel at £225.

The Ecosport can hold its own – the driving position is widely adjustable (oddly there's no option for an adjustable passenger seat, which seems a strange oversight), the newly designed seats are supportive and comfortable and handling is quite good for a car with a comparatively high centre of gravity. There’s nothing particular exciting about the steering, but you can turn the wheel with confidence.

Body roll feels better contained going round corners compared with the previous Ecosport, though the suspension is still a little rough around the edges. It’s obvious where the limits are of what Ford’s European team could do with the car when making their tweaks. The new six-speed gearbox is great, the newly developed 1.5-litre diesel engine a fine effort and the 1-litre three-cylinder Ecoboost unit is especially fun in 138bhp guise, but it continues to disappoint in terms of real-world fuel economy. You’d have to drive it like a nun to get anything worthwhile out of it.

Where the changes haven’t been able to follow through are the suspension, the rear legroom and the ridiculous boot door. It might seem out of place to mention it in the driving section, but it’s one of those things that will change the way you drive, forcing you to pull facing in to every parking space because otherwise you won’t have any room to open the door. It’s one of those features where you question how it even got past the drawing board.

The Ecosport is much improved, but that still doesn’t make it competitive – in such an insanely competitive segment everyone has to bring their A-game if it’s going to be a fair fight, but sadly this little SUV is outgunned on all fronts. It’s a shame, because we know that Ford can do small cars well – the Fiesta and Focus are both highly recommendable and set impressive benchmarks for ride and handling.

If we were going to seriously consider an Ecosport – and deciding that it was better than the literally dozens of strong competitors in the segment – then we’d have to ignore the entry-level Zetec trim and go for a Titanium model, which gets all of the toys and avoids the louche sporting touches of the ST-Line version of the car.