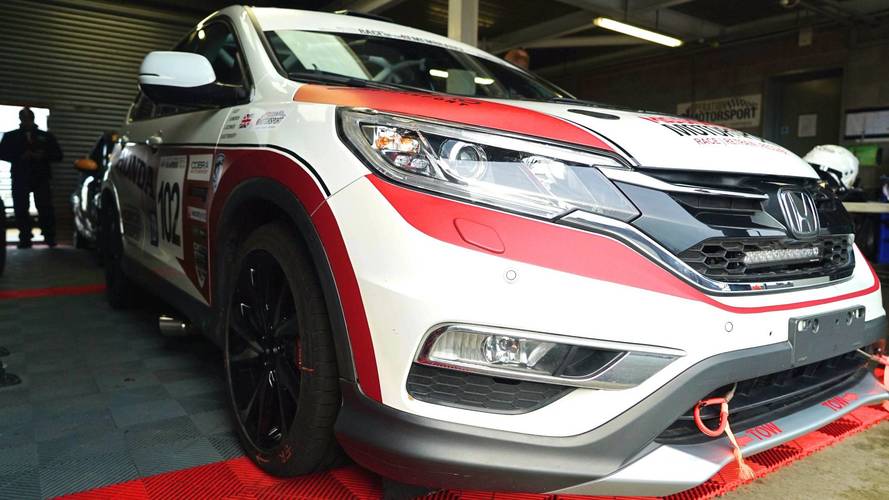 Honda’s CR-V is a softroader staple. It’s big, spacious, reliable, economical, and comes with enough creature comforts to make daily life easy as pie. One thing it was never intended to be was a racing car. Which makes Mission Motorsport’s latest racer all the more strange.

Mission Motorsport is a charity that helps members of the armed forces who have had to leave due to injury, be it physical or psychological. It does so using fast cars, both driving them and fixing them. For more on Mission Motorsport head to its website.

The CR-V racer came to be after Lionel O’Connor, a Mission Motorsport beneficiary, was instrumental in helping the development of the new Civic’s CVT gearbox. O’Connor is a left leg amputee and can’t use a manual gearbox on the regular, only automatics. His input on how a CVT should feel was invaluable. As thanks for his work, Honda helped the Mission Motorsport team out with a CR-V for its annual Race of Remembrance at Anglesey circuit. We were lucky enough to get a drive…

A CR-V doesn’t lend itself to being a racing car. It’s tall, oddly shaped, and is, well, an SUV. It’s designed to have many seats, many creature comforts, and many stains on its seats thanks to the many children it’ll have parading through its cabin.

The MM CR-V Superleggera has one seat up front, a massive roll cage in the back and a ‘baby on board’ sticker in the rear, but that’s about it.

Also changed from the road car is the infotainment system. In the name of light weight all the car’s speakers have been removed, leaving bare door cards and a reduced dash on display. However, the satnav screen remains, as does Bluetooth and DAB capability. This would be ideal were there any speakers, but, alas, no high-speed Classic FM is possible. The navigation does activate but is unable to find any signal as the link between the CR-V’s antenna and the system has been severed. It pays to know your way around the circuit, rather than rely on machines.

As there are no other seats luggage room is ample, though it will need to be oddly shaped to get around the custom built roll cage that eats up space in the rear to stop the car from pancaking in a crash or roll. The cage extends through the cabin to the front door, limiting front seat access – a necessary inconvenience.

Climb into the single, race-spec, seat, and you’ll be greeted with a familiar instrument binnacle and steering wheel. Also many, many warning lights. Stripping a car of pretty much everything tends to upset the electrics. Elsewhere in the cabin is a cut-off switch, a toggle to put a fan/demister on, the rain light switch and a big red button that allegedly gives an extra 50bhp (though this is most likely a creative truth).

Pop your foot on the brake and prod the engine start button to fire it into life and you're greeted by a familiar diesel grumble. Even with side-mounted exhausts there’s no disguising its motor, but for a race car it’s surprisingly quiet.

Throttle response, much like its roadgoing counterpart, is a little slow, but once you’ve learnt its intricacies it can be used to keep the revs within a healthy torque band to maintain momentum.

The CR-V racer comes with a nine-speed automatic gearbox that can either be left to do its own thing or be controlled with ‘wheel-mounted paddles. It does come with a ‘sport’ setting, though that doesn’t appear to have much of an impact on performance. It clings to gears a little longer than the standard shift mode, serving to make nought but extra noise. To get the best out of it you’re best sticking to the regular drive mode and using the paddle shifters. All told it’s not the best ‘box in the world – it’s slow to shift on a paddle pull, slower on its own. Downshifts are quick enough. It does tend to get confused when carrying speed into a corner, jumping you up a gear when a lower one for a fast escape would be infinitely preferable. All fixable with the paddle shift, mind.

Its diesel motor doesn’t offer much by way of power, but its massive torque means it can build speed pretty briskly. Ideal for long straights, and (if you can keep it in gear) punting out of corners at speed.

Braking something with a high centre of gravity and more weight than one would like is often a struggle, but thanks to set of prototype Honda Civic Type R brakes it can outbrake a race-spec Caterham. The brakes are sharp, so you need to learn how to modulate them, but once you get it… they’re stunningly effective.

Turn in, thanks to reworked springs and dampers, is most unlike a regular family car. Where a roadgoing CR-V will roll in to corners at speed, the race car stays relatively level. With adjustable camber, the car can be modified turn in better, or worse. Fiddling with it too much does result in high-speed wheel stability issues. It’ll stay in a straight line, but it really doesn’t like to.

Its limit is much higher than you’d expect, but it’s still an SUV, so tanking in to a bend too fast will result in understeer. As the CR-V is all-wheel-drive it has massive traction from corners, so while you may not be able to take a corner as quickly as you’d like you can exit them faster than the RWD competition.

Thanks to its weight balance (mostly up front), braking mid corner is not advisable as it will cause the car’s rear to slide. However, with swift countersteering and pinning the gas it’ll sort itself out thanks to its AWD setup. It can be a little alarming at first, though.

Noise in the cabin is minimal, which is odd for a racing car, however it makes the whole process wonderfully relaxing. As does an oddly soft ride.

As a ‘my first race car’ or something to surprise lighter, more powerful racers the CR-V is hard to beat. It’s in development at the moment, with a race debut at the 2017 Race of Remembrance showing its chops. The car, and its team of fearless drivers, managed a finish third in class, which ain’t bad for a 1.6-litre diesel. It’s a wonderful thing, mad of course, but the world is better place as a result.