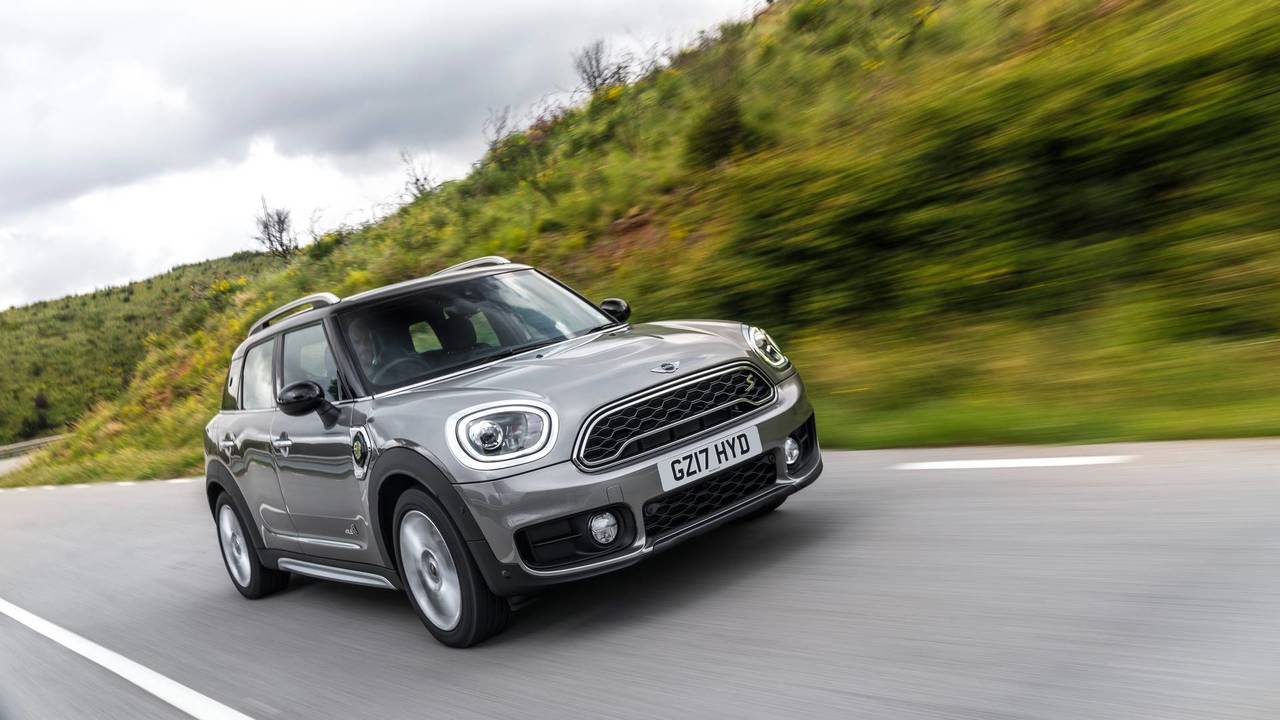 25 miles on electricity alone, and a sprightly petrol engine thereafter. What's not to like?

The hype has been focussed on the forthcoming electric Mini hatchback when it comes to plug-in Minis, but maybe it shouldn't have been. This plug-in hybrid Countryman (which has the official title of the Mini Countryman S E All4 PHEV, but who's got time for that, eh?) will suit a much larger audience – that of the big-selling (and generally bigger) Mitsubishi Outlander PHEV, and hatchback alternatives like the VW Golf GTE. Ultimately, it’s likely to be the more popular option when it comes to Minis you can fill up via a socket.

Under the bonnet the company’s 1.5-litre turbocharged petrol three-cylinder engine (familiar from the Mini Cooper models) drives the front wheels, while an electric motor powers the rear wheels. They function in unison much of the time, producing a combined 221bhp, or they work independently if the situation requires it.

You’ll get around 25 miles of urban pottering on electricity alone, while CO2 emissions of 49g/km means that this falls into the lowest company car tax bracket. A claimed economy of 134.5mpg will be achievable if you commute on the back of a fleet of winged pigs. Reckon on somewhere around 35mpg when the petrol engine is running, but of course if your daily journey is less than the electric range then you rarely need to rely on petrol at all.

If you’re familiar with the Mini Countryman then this will all be very predictable. It’s very much the same interesting, quirky-looking interior up front, and even the dials are barely changed. A lurid yellowy green starter button is the most overt nod to the electric heart of this Countryman hybrid.

The trade-off for that electrification comes in the back, where the seats are mounted slightly higher and can no longer be slid for-and-aft.

You’ll still get two average-sized adults in the back in reasonable comfort, which will make this more than fit for purpose in most people’s books even if rear headroom isn’t quite what you’d expect of a compact SUV.

The boot is also a bit smaller than the standard Countryman – the floor is raised to accommodate the batteries, but provided your dog is still fairly sprightly it’ll be able to make the jump up over the load lip into the flush boot floor okay. Again, you’re sacrificing a little practicality for the electric potential, but not enough that it’s likely to bother the average motorist with a small family in tow.

You’ll be pleased to know that it drives like you’d hope a Mini would. Sure, it’s a touch more lead-footed than the petrol-only Cooper S Countryman (it’s a lot heavier) and the steering feels quite artificial, as it does in every Countryman – particularly in Sport mode. But in the mid-setting it’s got enough bite and sense of feedback that you can make the most of a fairly aggressive turn-in and grippy cornering ability. It does hand you armfuls of understeer if you really push it, but in the seven or eight-tenths driving that will be rather more typical of this car, it still delivers a sense of the characteristic Mini zing.

More importantly, where some early plug-in hybrids switched between power sources with all the grace and cohesion of a drunk stumbling down the stairs and styling it out in the hope that nobody noticed, the Mini makes good, smooth and appropriate use of both engines.

Most of the time we preferred to stick to Hybrid drive mode and let the car juggle power sources. Or put the car in pure electric to save you the petrol money, and you can still do motorway speeds easily, and burn off the traffic lights with unexpected aggression thanks to the instant delivery of 284lb ft. In fact, it’s worth pointing out the plug-in Countryman feels properly hot hatch fast up to about 30mph, and a sprint time to 62mph of 6.8sec is none too shabby, either.

The six-speed auto manages to mesh all of this together very well, mish-mashing the petrol and electric engines to make the best use of both without leaving ungainly pauses between shifts.

Ride comfort is acceptable, too. You feel the substantial weight of the Countryman over compressions, particularly, but it softens bumps and ruts well enough, and keeps you from feeling rattled or wobbled about despite some noticeable body roll.

There are still compromises here over a conventional petrol or diesel Countryman – namely heavier handling and slightly reduced practicality. But after the government grant, the Countryman PHEV comes in at just over £29k, which is within a few hundred quid of the Cooper S All4 Automatic. Just don't forget that you'll want to add the £950 Media Pack to get the widescreen nav, and the £335 front and rear parking sensors would be a wise addition, too. Otherwise the Counryman PHEV is pretty well equipped for comfort, convenience and style, but you can go to town with options if you want to.

Overall, if you want a plug-in hyrbid for circa £30k, and like the looks and the all-wheel drive aspect then give this serious consideration, as those fossil-fuel free journeys to the office will save you quite a bit, and this is still a decent car to drive and live with.

It does makes a lot more sense as a company car since it comes in at £4791 in BIK tax (for 40% tax payers) over three years - bob-on the same as a VW Golf GTE. The latter drives with more finesse, and less wind and tyre noise, but it doesn’t have the all-wheel drive and SUV fashionista appeal of the Countryman. And either is a better bet than the stodgy, noisy and cheap-feeling, if roomier, Mitsubishi Outlander PHEV.

So if you want short-distance electric journeys in the week, and a combustion engine for the weekend family trips, your options just got a lot better.