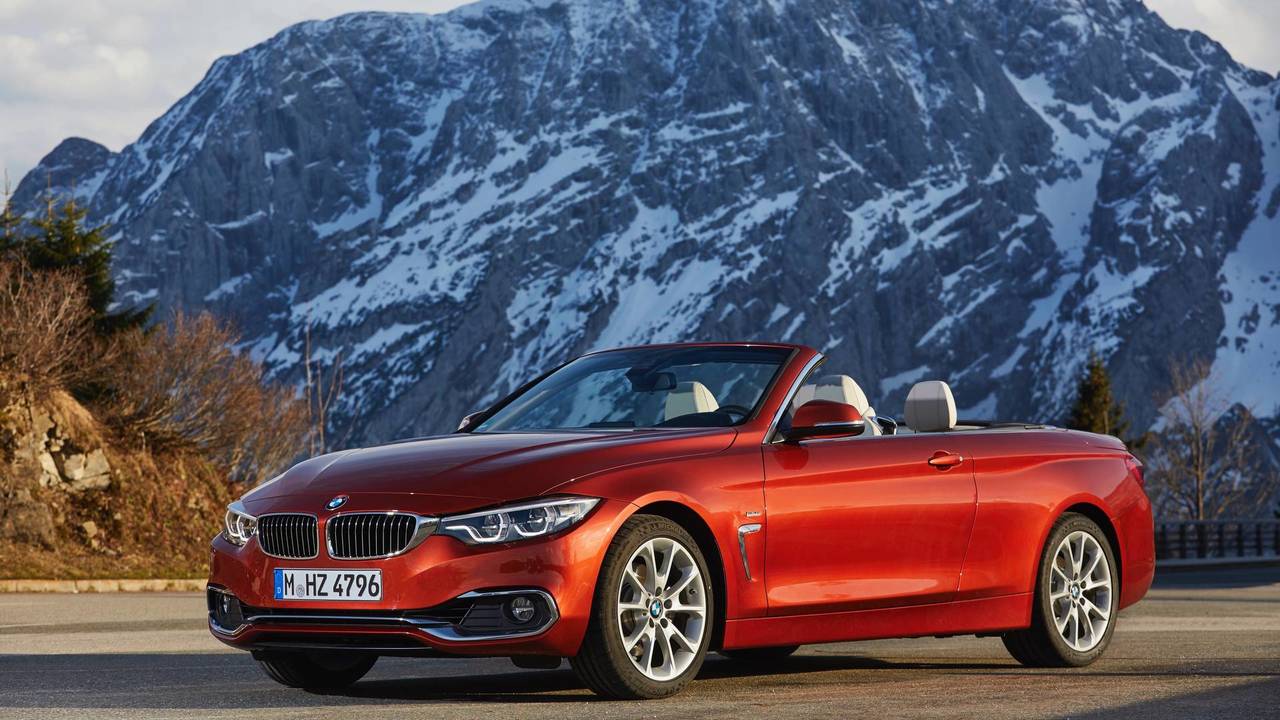 Coupe or convertible, the BMW 4 Series makes the decision that little bit easier, though being everything to everybody does mean it misses out in some areas.

Did you know? The most expensive 4 Series Convertible is a four-wheel drive diesel model

Compromise, that’s what convertibles used to represent, but with the 4 Series Convertible the compromises are arguably less. Unlike its obvious Audi A5 and Mercedes-Benz C-Class drop-top rivals the 4 Series’ roof is a folding hardtop. That promises to bring the best of everything, being coupe taut and secure when it’s cloudy, and roof-down glamorous when it’s not. The 4 Series Convertible is beginning to feel its age among newer rivals though, while BMW also needs to be a little bit more generous when it comes to standard equipment. We'd settle for a Mercedes C-Class Cabriolet instead, since it offers better ride comfort and more generous equipment, and the Audi A5 also has a more sumptuous and classy interior. Even so, the 4 Series runs both incredibly close - and is the only option if you want the added security of a folding hard-top.

Folding hardtops revolutionised the convertible marketplace. There was a time when just about every type of car could be had with the ability to stow its roof in the boot. Usually fairly clumsily, stylistically at least, the roofs and their mechanisms creating some visual compromises, particularly when down. No such issues with the BMW 4 Series Convertible, which can look either coupe cool or cabriolet glam without looking awkward in either form. That is an impressive feat of not just design, but engineering.

Even so, the 4 Series Convertible’s key rivals, the Mercedes-Benz C-Class Cabriolet and Audi A5 Convertible, have stuck with more conventional folding fabric roofs. That’s not just to ease complexity, but, says Audi and Mercedes-Benz, customers want to be seen to have spent more money on the drop-top model even when the roof is up. That’s just not the case with the 4 Series Convertible; it really could easily be its sister coupe when it’s closed, so neat is its roof design.

Whether that’s a good thing is down to your preference, though what’s not in question is the 4’s fine looks, the shape nicely balanced, with fine detailing and surfacing. If it loses out it’s simply that being so closely related to the 3 Series saloon in style it could be overlooked, something that is unlikely to be the case for its contrasting colour, folding fabric-topped rivals.

All predictable BMW inside, and there’s really nothing wrong with that so long as you’re not after the very latest cutting edge technology. The lines on the dashboard and transmission tunnel create the impression of a driver-focussed cockpit, without being too overt, the cabin neatly styled throughout. The materials all feel of fine quality, even if there are plenty of them, and the build quality is as you’d expect from something with a premium badge and price.

Where it fails slightly is that modern feel. The dash-topped screen looks a bit like an afterthought, and while its operation is slick enough with the familiar iDrive controller, but we’re now in a world where touchscreens are not uncommon in even mainstream cars.

The seats are comfortable, and offer plenty of support, space and adjustment, though the two in the back are rather upright and seriously lacking in legroom. Occasional use only back there, then, and for the smallest and most flexible of your friends or family. If you’re a determined drop-top driver be sure to option the Convertible Comfort Package that adds warm air ‘collar’ heating on the seats, steering wheel heating and a wind deflector - though put that wind deflector in place and you lose the rear seats. In all the wind deflector is an option, which seems a touch stingy.

You don’t buy a drop-top with a view to practicality, but even so the boot, with the roof up, is decently sized and shaped, it having 370 litres of capacity. That’s down some 75 litres over the coupe, and drop the top and it’s reduced to just 220 litres. There’s an inexpensive optional through-loading option that allows longer items to be carried, though the opening itself is a small 30x20cm - so you’ll struggle if you’re a snowboarder rather than a skier.

You can do all the basics like connect your smartphone via Bluetooth as standard, but you’ll need to do some spec-box ticking to get the very best of BMW’s connectivity and tech offering. Do that and you can have everything from a surround view camera to help you park, to WiFi, a television and enhanced Bluetooth. You’ll need to pay for Apple CarPlay preparation in line with all of that, which is a bit cheeky these days.

As ever BMW bundles many different convenience, communication and connection services all under packages, be it the Advanced Parking Package, Active Security Package or Media Package Professional. The latter brings more advanced sat nav (and a bigger screen to view it) over the standard system as well as Online Entertainment. Add Plus to that, and you’ll not only pay more, but gain BMW’s useful head-up display. Plenty of tech and connectivity, then, it just a shame that so much of it requires additional outlay.

Understandably, BMW doesn’t offer the complete engine line-up you’ll find in the 4’s 3 Series relative, that underlining the 4 Series’ greater status as well as highlighting the fact that here it’s also hauling about a fair bit more weight. Indeed, over the coupe it’s a not insignificant 225kg heavier, think of that as a pair of very strapping prop-forward rugby players along as passengers all of the time.

Given that, it’s surprising that the 4 Series Convertible’s performance is as close to the coupe as it is. Across the range it only typically trails its fixed head relation by under a second from 0-62mph, and is as close as just 0.5 seconds in the bigger engined models. It takes just over 5 seconds to 62mph in the 435d xDrive M Sport, the biggest engined, four-wheel drive Convertible being the quickest car in the range. The range-topping diesel is followed by the rear-wheel drive 440i petrol, then 430d and 430i, with the 420d being marginally quicker than its 420i petrol alternative.

Choose the eight-speed automatic transmission (where it’s not already standard) over the six-speed manual and you’ll benefit not just from better performance, but improved economy and emissions. Add the convenience factor, and that automatic is a compelling option, particularly given the 4 Series Convertible’s more relaxed focus.

The entry-level engines don’t necessarily feel like the poor-person’s choice, giving decent, as opposed to spectacular, performance. Given the indulgent nature of the 4 Series Convertible we’d be inclined to choose the 340i M Sport, not least because dropping the roof allows you to hear that 3.0-litre turbocharged six-cylinder better. And yes, we know the 420d makes a lot more sense, but since when has an open topped car ever been bought with a sensible head on?

BMW’s strength has long been its handling, and that’s evident here, the 4 Series riding on a wider track and having a lower centre of gravity over its 3 Series relatives. Even so, there’s no denying the 4 Series Convertible loses some of its sharpness thanks to the loss of its roof and the additional weight that comes with it over the Coupe.

You’ll only really notice that bulk if you’re travelling a bit quicker, though, where the Convertible turns in without quite the immediacy of its coupe relation. There’s the possibility to option Adaptive M Sport Suspension, which brings variable dampers, it offered as a stand-alone option or as park of BMW’s Dynamic Package that also brings Variable Sport Steering and the M Sport braking system.

There’s a bit of shimmer through the structure on poor surfaces with the roof open, but even with M Sport suspension it rides decently enough, if not with quite the suppleness of the Mercedes-Benz C-Class Cabriolet. Drop the top though and your focus changes entirely, the 4 Series proving an adept, enjoyable cruiser, that’s both refined and capable. Wind and road noise is fine with the roof up, the rush of wind around you roof down being part of the appeal. The optional wind deflector is worth having as it significantly reduces cabin buffeting at higher speeds - though being positioned over the rear seats it effectively turns the 4 Series into a two-seater.

Being a niche model there’s no independent EuroNCAP crash test score, but it shares its underpinnings with the 3 Series which scored the full five stars. It should protect you well, then, but you need to take into account its inherent structural changes that removing its roof brings. A convertible’s usual weakness, rollover protection, is aided by automatic pop-up roll bars behind the rear seats, while the windscreen surround and underbody is also strengthened for both safety and dynamics.

There are driver, front passenger, side and head airbags, ISOFIX child seat mounts in the rear and electronic stability and traction control systems and ABS brakes with Brake Assist, Cornering Brake Control and Dynamic Brake control with brake pre-tensioning and drying. All fairly commonplace, particularly in premium models.

The two no-cost colours of non-metallic black or white are complimented by a slightly broader palette of hues than elsewhere in the BMW range. There are bold red and orange choices which suit it, with seven optional metallic colours available for around £650, or double that for one of the four BMW Individual colours. Of course, BMW can paint it any colour you like, though deviating from the available colours will cost more again, and add time to the ordering/build process. Metallic paint comes as standard on 440i, 430d, and 435d xDrive models.

In addition to the M Sport’s aggressive exterior styling it gains the Professional Media package, electric seat adjustment with memory, M Sport Suspension and M specific trim inside. If you like the looks, the M Sport price walk isn’t much, particularly given it adds the BMW Professional Media Package which would account for around two thirds of the extra if optioned on a Sport individually.

If you’ve an eye on economy then the indulgent 4 Series Convertible can be run for sensible money. Here, the 420d models make the most sense. With them you’ll have a sun-ready car that’s able to achieve between 55-60mpg officially depending on whether you’ve stuck with the standard six-speed manual or opted for the eight-speed automatic. If you’d rather petrol was powering your 4 Series then the 420i manages a combined consumption figure in the early to mid-40mpg range. Even so, all emit and consume more as a result of their greater weight, adding to the running costs.

The bigger engines obviously cost more to buy and run, though the near 40mpg official figure of the 440i M Sport model impresses - even if you’ll struggle to get near that in reality. If bigger power and palatable mpg is your goal, then the 430d and 435d are worth considering, the 430d better than the 435d xDrive because the more powerful car also adds four-wheel drive. None emits more than 170g/km of CO2, and the majority of models are sub-150g/km, those 420d diesels significantly so.

Residual values should be good, meaning you’ll find leasing rates surprisingly competitive; a 420d M Sport is available for under £350 on a business monthly lease, or about £100 more on a personal one.

All BMWs now have condition based servicing, dictated by the car. Reliability should be good, though BMW hasn’t performed quite as well recently on some reliability and customer satisfaction surveys. There’s a three-year unlimited mileage warranty, as standard.

Some might balk at the £5,000 premium that the Convertible brings over its Coupe relation, though most will simply accept that the price you pay for open-topped motoring. That price differential largely matches that of its Mercedes-Benz and Audi rivals, too.

Pricing itself is on par with its Mercedes-Benz C-Class Cabriolet alternative, but the Audi A5 Cabriolet is a bit cheaper in comparison.