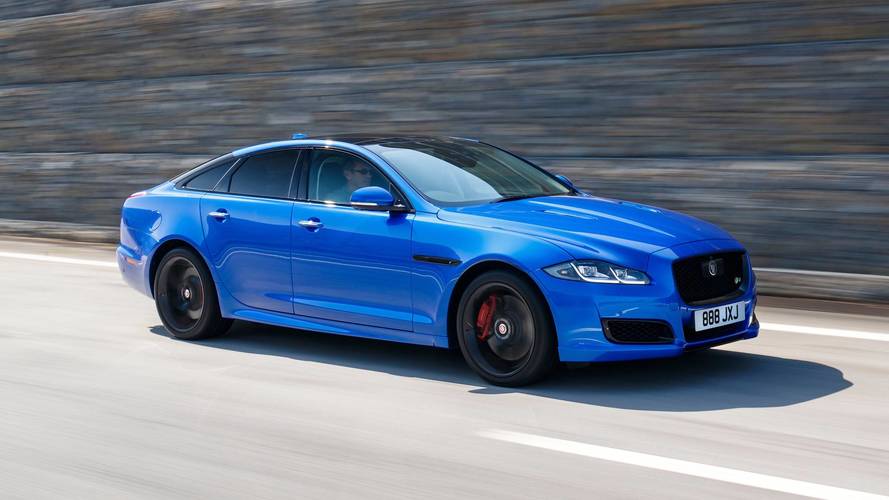 For those who work in dog years the current Jaguar XJ is 56, which is an age. Of course, that also means it’s eight years old, which is a fair old while for cars. While the exterior isn’t as striking as it once was, it’s still a handsome way to get around town, and now it gets a new engine for this megabas%^&d XJR.

Its wide grille is there to scoop vast amounts of air to cool the XJR575’s 570bhp supercharged V8, but also to look menacing, because why not?

The contrasting C-pillar was given a fair bit of stick when the then-revolutionary looks were first revealed, but it's certainly a stand out feature of the exterior, working well with brighter hues like the 575’s exclusive (for now) Velocity Blue paint.

Otherwise, the back end of the XJ was once described as looking a bit like something you’d find on a Korean car. Nowadays you wouldn’t find anything so swoopy on something from Seoul, but it’s still there on the ‘ol Jag looking mighty fine. In fact, while it’s had a few nips and tucks over the years, the XJ has held up well. Better than the lumpen, last generation BMW 7 Series for example.

Climb inside and you’ll see it has aged wonderfully. Jaguar Land Rover’s latest (and occasionally awkward) sat nav system sits in the centre console, but that’s the biggest change made to it since its 2009 debut. The car’s party piece has always been a large bow of wood or carbon fibre that arcs from the doors, all the way along the top of the dash, giving you the impression that you’re in something far less mundane than a car. A speedboat, perhaps.

A new XJ is a long way off, though, and while the likes of the BMW 7 Series, Mercedes S Class, and Audi A8 have all been updated with fresh new tech and shiny new faces, the Jag… hasn’t. Bar the new nav screen.

So, like most Jaguars it offers grace with its pace. But, as founder Sir William Lyons said, it also needs space…

Considering it’s over five metres long (more if you go for the long wheelbase version) and two metres wide, you’d expect plenty of room, and that you get. Up front there’s ample space for your passenger, and should the driver have long legs, the person sat behind them won’t curse their existence on a long trip. Though do beware if you’re tall, because though that swooping roofline means you lose headroom inside; an Audi A8, BMW 7 Series or Mercedes S-Class (or even an E-Class) has better headroom in the back.

The boot offers 479-litres of space to throw bags into. It’s not class leading, but it’s enough for most buyers.

Only a few cars this size manage to feel smaller than they actually are, and the XJR is not one of them. Trying to thread it down narrow lanes and b-roads may cause some unintended puckering.

Jaguars have a certain feel to them. Whereas German luxobarges have many modes that swap between ‘sorta comfy’ to ‘sorta stiff’, the XJR575 has ‘comfy’ and ‘less comfy’. Without Dynamic mode in play (less comfy, in case you’re wondering), you glide effortlessly over the road. It is as you’d hope a car like the XJ to be: peaceful, serene, wonderful.

Throw the car into ‘less comfy’ and you get a more classic Jaguar take on performance. Yes, the car does tense up a touch; it feels like it’s ready to surge forward and attack corners (or, thanks to its 516lb ft, do a massive rolling burnout), but at no point do you feel the ride comfort is compromised. It’s still composed and comfortable, just with a slight edge to it.

No one can accuse the XJR of having heavy steering – it’s decently weighted for a gently sporting intent, yet not heavy enough to overwhelm when all you want to do is bimble from A to B.

Jaguar has yet to give in to the lure of a dual-clutch automatic gearbox, instead sticking with a ZF torque converter eight-speed auto. It’s fast enough to change of its own accord, though you can flip the paddles and change on your own if you fancy.

Even drivers with the least interest in driving will find the front of the car a touch heavy when you find a bend; That’ll be thanks to the enormous V8 making its presence known in a softly sprung car. If you want something fast you need a big motor, but if you want something comfy you can’t have rock hard suspension. However, it’s still fun to drive quickly thanks to the astonishing noise that falls out of the rear, and just how fast it accelerates.

Something that big and heavy just shouldn’t be that fast. Yet it is.

Audi, BMW, and Mercedes all make newer, shinier, vastly more tech heavy cars in the same class. They all promise many exciting things like autonomy, and many adaptable drive modes as well. Yet none of them are exciting to look at. None of them scream elegance or character.

That’s what the XJ has in spades. If you’re looking for the most modern car our there then the XJR575 isn’t for you. It’s too old, too tech-lite. But… if you want something with character, and an ageless-in-a-George-Clooney-way interior, and a V8 that sounds like a jackhammer slicing through blancmange, then step this way.