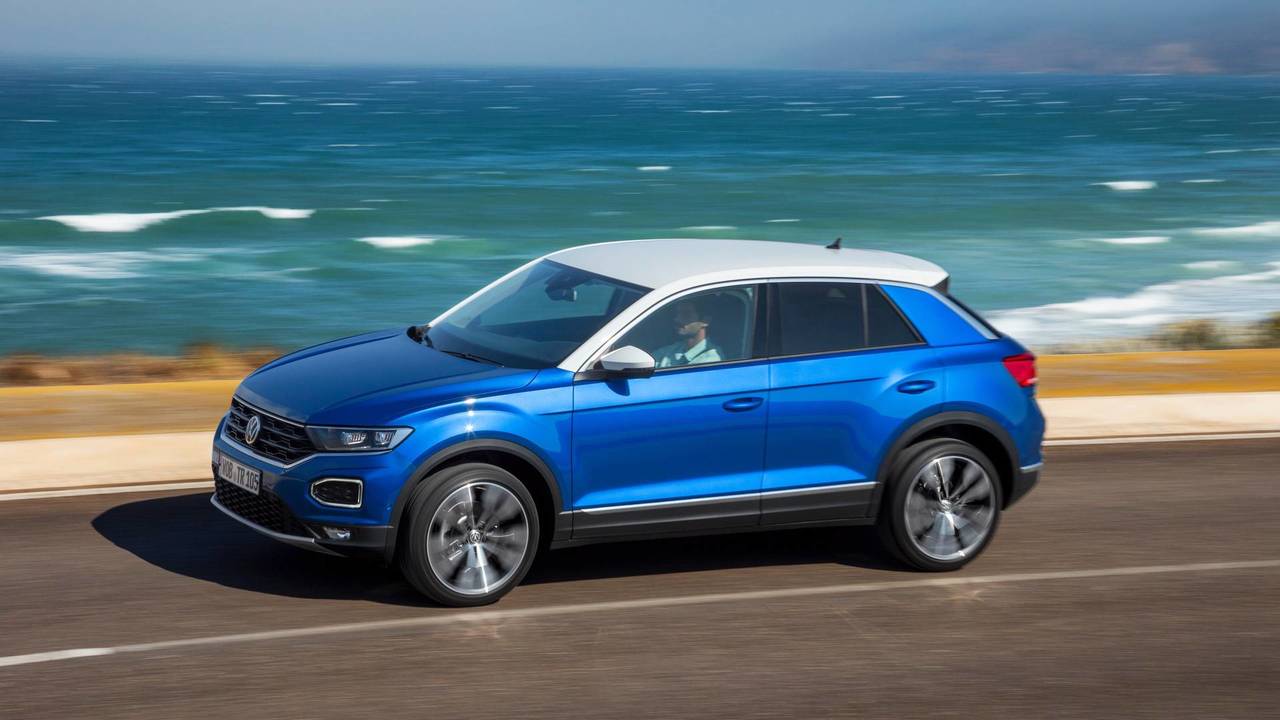 The VW Scirocco is dead. Long live the Scirocco. And this is relevant information here, because the new Volkswagen T-Roc is not a straightforward function-first SUV. The T-Roc is VW’s ‘emotional’ SUV. It’s the brand’s smallest SUV, and the main reason you might buy it  over its many and varied rivals is that ever-important, ever intangible 'want one' factor.

It is, in many ways, the car that replaces the now defunct Scirocco. It’s just that the much-loved coupe has come back as an SUV. And let’s not gloss over the fact that one in every three cars sold globally is an SUV. One in three.

So let’s put the anti-SUV attitude away, embrace the revolution and find out if this one is worth your money or not when there is a kaleidoscope of other high-riding sport/hatch/coupe things out there. Not least of which are the Audi Q2, Mini Countryman and Toyota C-HR, which are about the closest alternatives in price and purpose to the VW T-Roc.

The T-Roc is one of the more eye-catching cars in the class. It’s available in as many as 24 different colour combinations for the exterior, and – thankfully – looks distinctly different to any other VW SUV. It’s not as extrovert as the smaller and cheaper Nissan Juke, but it also looks way more interesting than its bigger if less style-led VW Group siblings, the Seat Ateca and Skoda Karoq.

More pertinently, the Audi Q2, Mini Countryman and Toyota C-HR run it pretty close on the style stakes, so we'll leave you to decide which one you think looks best.

We certainly reckon the T-Roc’s blocky front end and raked roofline look pretty cool, but the interior is less impressive. You can get brightly coloured interior trim inserts, but they’ve been applied to a very conventional cabin architecture; An 8.0in touchscreen sits high up and is tilted towards the driver, and straightforward air-con buttons line up beneath. Which is all fine, logical and easy to use.

So while the brightly-coloured inserts bring an element of fun that suits the car’s agenda, they look rather aftermarket and out of place because they sit in such an ordinary console. One that’s actually dominated by quite coarse-feeling plastics that feel cheaper and are noticeably less tactile than a Golf’s for instance.

Still, credit to VW for offering the brave interior colours, and you can have a less garish interior if you wish. You can also have a full digital display in place of the conventional dials for £405, or it’s standard on top-spec SEL, but we found it a bit tricky to change the view layout, and the speedo's relegated to a corner where it's easy to miss if you have the full nav screen on the display. We’d save the money and stick with the standard, easy to read dials and very decent touchscreen that's complete with standard Apple CarPlay and Android Auto.

It’s a shame that you have to go for SEL (the most expensive of three trims) to get factory-fit navigation as standard, though – otherwise it’s a pricey £1130 option.

There’s space in the back for a couple of average-sized adults to lounge about just fine, but a middle occupant will feel outright uncomfortable.

The boot is pretty big and has a variable-height boot floor, while the rear and even the front passenger seat fold flat so that you can just about carry a 2-metre items. For all that, the load-lip is high so lugging your paddle board into the car is going to be harder than if you’d bought a similarly priced and more practical estate car.

Those boring wagons aren’t going to look anywhere near as cool on your Instagram feed, though, so it’s pretty irrelevant.

The T-Roc has a broad engine range that includes three petrols and three diesel engines, with four-wheel drive available in conjunction with the higher-end motors and a seven-speed dual-clutch automatic also optional on all of them.

It's one of the broadest engine ranges going in the class, so whether it’s the 113bhp 1.0-litre petrol, a mid-range 148bhp 2.0 TDI (joining the range later this year) or the 188bhp 2.0-litre turbo’d petrol complete with four-wheel drive and DSG automatic that we’re driving here, there's a T-Roc for you.

And it’s quite a sporty number, too. Sure, there’s a bit of body roll going on, and the handling in our 4Motion car errs more on the side of predictable and precise rather than fun, but the T-Roc turns in keenly, steers neatly and sweeps through direction changes with enough voracity to offer a spark of entertainment if you look for it.

The 2.0-litre engine delivers a muted hot-hatch sprightliness that few rivals attempt to deliver, too, so if you really want a pacey SUV then do consider it. But having experienced the 1.5-litre petrol in the Skoda Karoq recently, we’d say that even a front-wheel drive, manual 1.5 is likely to feel perky and enthusiastic (and it’s cheaper by some £7000), so don’t feel like this 2.0 TSI is your only option if you want a T-Roc with a bit of verve.

The flipside is that the T-Roc has a firm ride, even on adaptive dampers (mind you, the 19-inch alloys on our test car likely didn’t help). It’s quite restless over poor town roads, and thumps about over potholes even at higher speeds, although it does settle well on the motorway, where you'll be more bothered by the rather noticeable wind noise rushing over the windscreen.

If you’re after a family hatch-sized SUV kind of thing with a bit of fizz and fun about it, then this is a good bet, but truthfully you must really want those looks to justify a T-Roc. There are more practical options out there, such as the bigger Seat Ateca that’s similar in price and is also a sharp drive, if much less interesting to look at.

And at the price of this top-end 2.0 TSI DSG 4Motion model, you’re spending the same as you would on a VW Golf GTi Performance Pack with DSG, which is vastly more fun and just as practical in 98% of situations. So don’t forget to look outside the SUV box if you’re not totally wedded to the idea of a snazzy-looking crossover.

If you are fully committed to the ever more varied world of SUVs, this is one of the more distinctive to look to at and one of the more fun to drive. Look carefully at the Audi Q2 2.0 TSI Quattro before making any decisions, as It’s within a few hundred quid of the T-Roc, or the Mini Countryman Cooper S All4 Auto is thousands cheaper if not as well equipped.

Ultimately, the T-Roc will make a lot more sense in a less expensive guise than tested here but if you like the way it looks then you’re more than likely to find that it’s exactly the car you want it to be, regardless of which engine you favour.