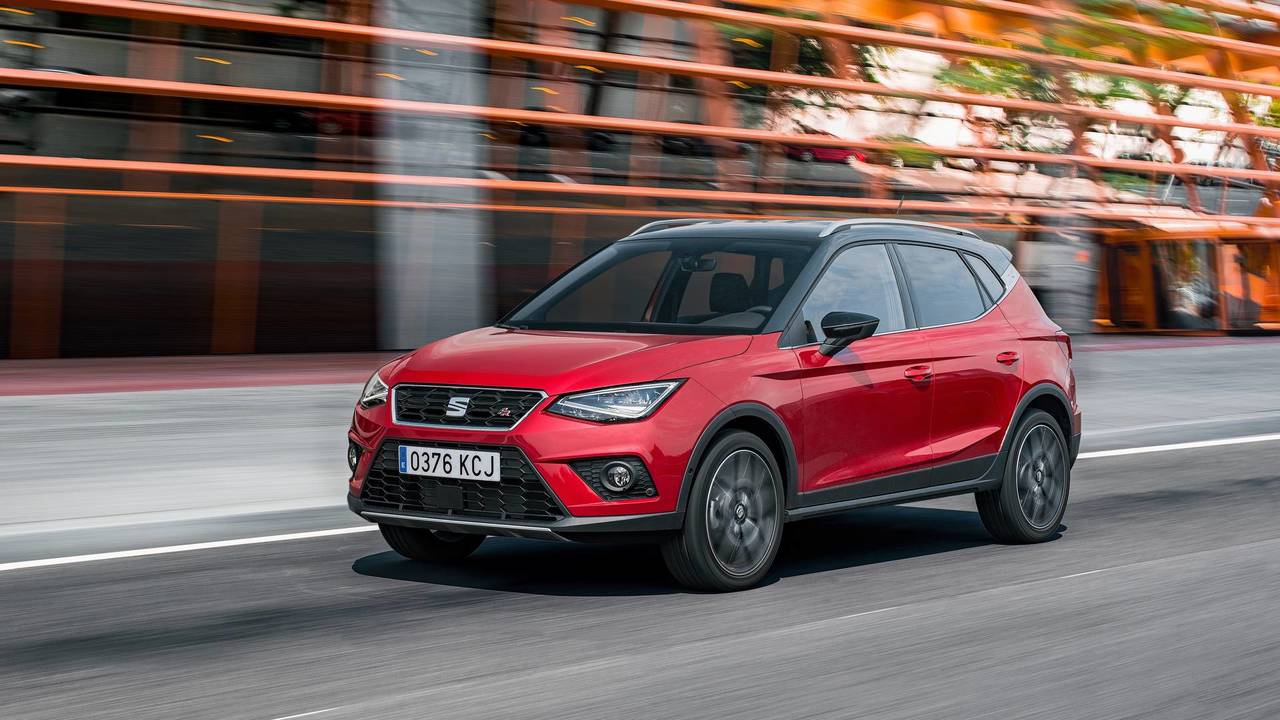 2017 is rounding itself out with a glut of small SUV/SUV-like cars. The Hyundai Kona, Kia Stonic, and Seat Arona are a few of many. It seems the world really fancies the idea of driving a pea-sized car that sits several feet off the ground, yearning for a small, easy to park car, while also looking down their noses at those who aren’t as high up in the world and being able to load things like child seats in the back with ease (more latter than former, probably).

For a while it seemed there was little left for the automotive industry to turn into an SUV-esque car, but these tiny high riders are sprouting like there’s no tomorrow. In fact, sales of cars like the Arona have grown 700% over recent years, so there’s a good enough reason to join in the fun.

Seat’s Arona is a handsome enough car, in keeping with the rest of Seat’s range (no bad thing) and granting it a design more on the aggressive side of things than rivals like the Hyundai Kona or Kia Stonic, if not perhaps as outlandish-looking as the popular Nissan Juke that really kicked this class off.

Seat is offering nearly 70 colour combinations as well, thanks to several roof and body combos. Though do yourselves a favour and avoid ‘Mystic Magenta’ altogether as it makes the car look like it’s been covered in offcuts of iPhone Rose Gold. It is not pretty.

Inside you’re treated to solid materials and a design closer to functional than fancy. It doesn’t look or feel special, but it does feel like it'll last a long time. For most buyers, the fact that it’ll likely withstand the crumbs, tears and kicks that come with children will mean far more than a seat design inspired by the curvature of the buttocks of Michelangelo’s David.

It comes with a 400-litre boot with an adjustable floor, but the rear seats don’t slide forward like they do in a Renault Captur. Still, there's enough space for people and stuff to cater for a small family's needs, and there are plenty of places to put things like phones, keys, and wallets up front as well.

What does irk slightly is that some of the coolest tech isn’t available straight away; The Arona will come with Amazon’s Alexa voice control system and a digital instrument cluster further down the line, but not quite yet.

With a 1.0-litre 113bhp engine on board the Arona is not a speed machine. It’ll crack 0-62mph in ten seconds, which isn’t the longest time in the world but when you need to cover ground quickly it can prove slightly troublesome. The 7-speed DSG automatic gearbox it’s mated to is a wonderful piece of technology but it doesn’t flatter the car as well as a manual. Also, it’s marginally slower to 62mph than the stick-shift.

Our test car also came with a hefty helping of wind noise at motorway speeds, which means conversation with passengers/instructions to children to get them to stop expelling fluids all over the shop is a touch more difficult than you’d hope. Around town it’s much more subdued.

In fact, around town is where the Arona shines. Its ride doesn’t jar and its steering is light enough to make navigating tight streets easy. Its small size is also handy if your sat-nav accidentally takes you down what seems like one of Europe’s narrowest streets as well. You’re offered cracking visibility so you can see all around the car, though the windscreen pillars are pretty thick, so T-junctions can get a touch tricky.

Out of town you realise that the Arona isn’t a car built for driving fun, at least with the standard suspension set up. It wallows and leans into corners, but keep the speed down and drive sensibly and you’ll be just fine. Just don’t go for one of these if you’re after something that satisfies you when you're in a hurry.

The 1.5-litre 147bhp petrol FR Sport fixes all of that – it comes with a far better suspension set up and, of course, more power, so should you need something to occasionally blow off some steam there’s still an Arona for you. Both the FR Sport and Xcellence Lux come with Seat Drive Profile, which allows you to switch between ‘normal’, ‘sport’, ‘eco’, and choose-your-own-adventure ‘individual’ mode. Each changes the throttle and steering response of the car – sport makes things a touch more exciting, eco lessens throttle response and makes proceedings rather dull, if more eco-friendly.

There are a ton of cars in this segment now, and there are only more coming. They’re not for the keener driver at all - a standard hatchback like a VW Golf or Ford Focus, or Seat's own Leon, offer much the same cabin space and are more fun to drive.

Even so, while the Arona won’t blow your socks off, it does give you something comfortable to carry them around in while you’re going about your daily life. It’s a perfectly easy and pleasant car to drive around town, if noisy on the motorway, and its looks give it an edge in an increasingly crowded class.

Shopping around to find a car that suits your wants and needs is, of course, essential, but if you're after an urban SUV, the Seat should be high up on your list.