The new Audi A8 is a superb luxury car, it's just a shame we still have to wait for the really exciting new tech.

Or not, really. The latest BMW 7 Series is so close to the S-Class as to be near enough on top of it, and this A8 looks like it might – just might – turn the tables on the ever-dominant Mercedes.

Which is significant not because this is a big-selling class, because it’s not in the UK. It’s significant because the limo class has always been where a brand showcases its halo tech before trickling it down into the workaday models. This is more a war of which manufacturer has the best and most advanced technology, than it is a war of luxury cars. 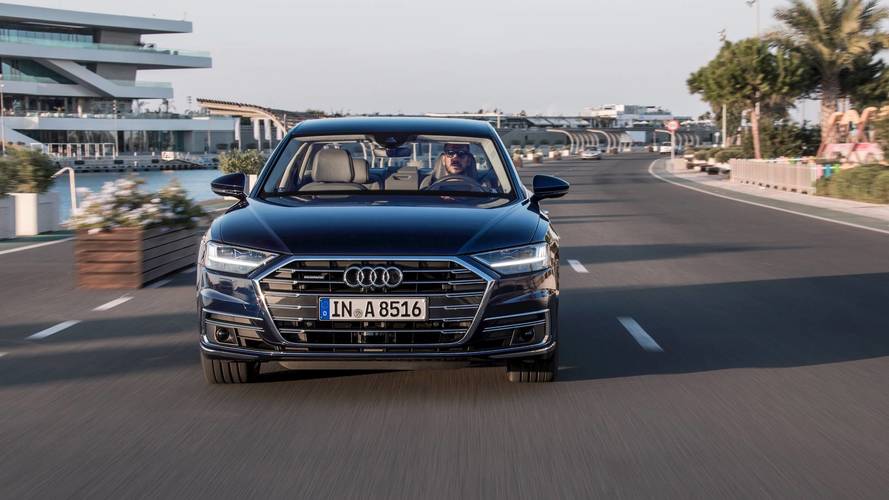 As well all the impressive gadgetry on the A8 – which we’ll come to in a bit - we’re going to see the new A8’s styling cues becoming a feature on lesser Audis.

The new grille is bigger, brasher and more in-yer-face than ever, but certainly on a broad slab of vehicular real estate like the A8, it works well. Most of the other surfaces have been cleaned up and made to look sleeker, and the distinctive rear light strip will also make it onto other Audi models, such as the new A6 that’s due to arrive in 2018).

Predictably, the A8 is bigger than ever, measuring in at 5.17 metres in standard form or 5.3m for the extended A8 L. Engines will include a 3-litre V6 diesel or petrol, a V8 diesel and a W12 petrol at the pinnacle of the range, and all have quattro four-wheel drive, an eight-speed automatic and adaptive air suspension. A plug-in hybrid model, which will do around 30 electric miles before the V6 petrol engine kicks in, will join the range later next year. 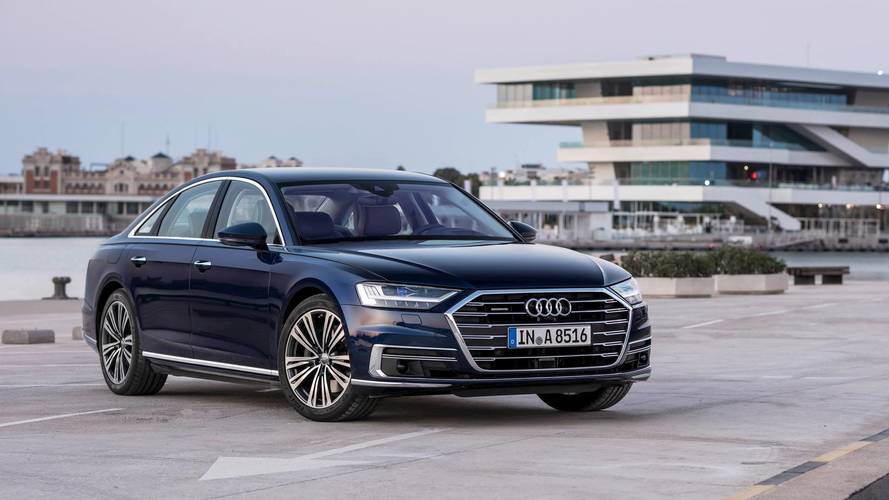 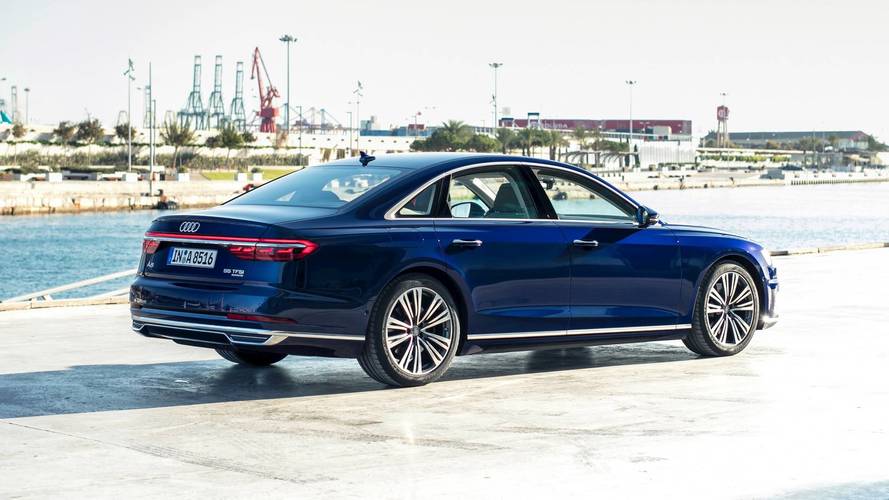 Slide into the broad, cushy driver’s seat and you’re met with Audi’s fully digital ‘Virtual Cockpit’ (head-up display is also standard), and two large touchscreens making up the centre console. Gone is the rotary controller; the A8’s new system gets an upper touchscreen for nav, multimedia, phone and systems settings, and the lower screen for your cabin and seat adjustments.

We found it tricky to figure out some of the more advanced nav adjustments, and the advanced voice control was also a bit hit-and-miss, but the home screen is always easy to hop back to, and overall you get used to the system very quickly. The graphics are also second to none, and the air-con and seat settings are straightforward. 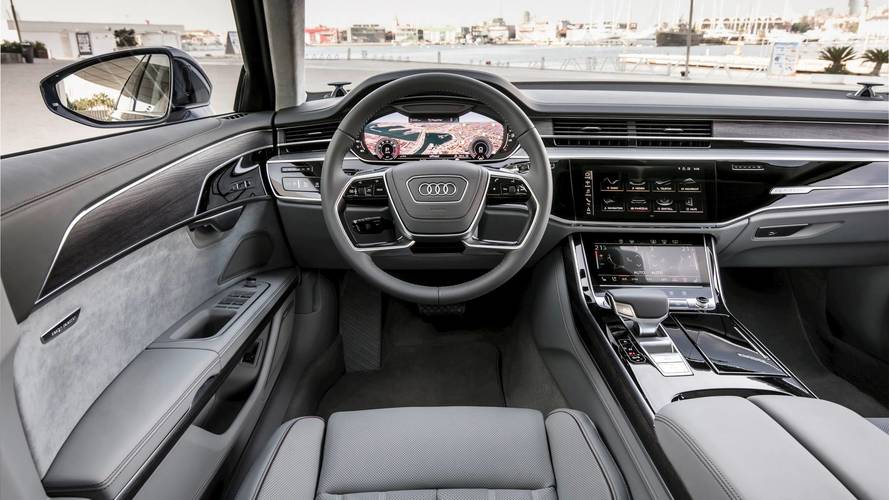 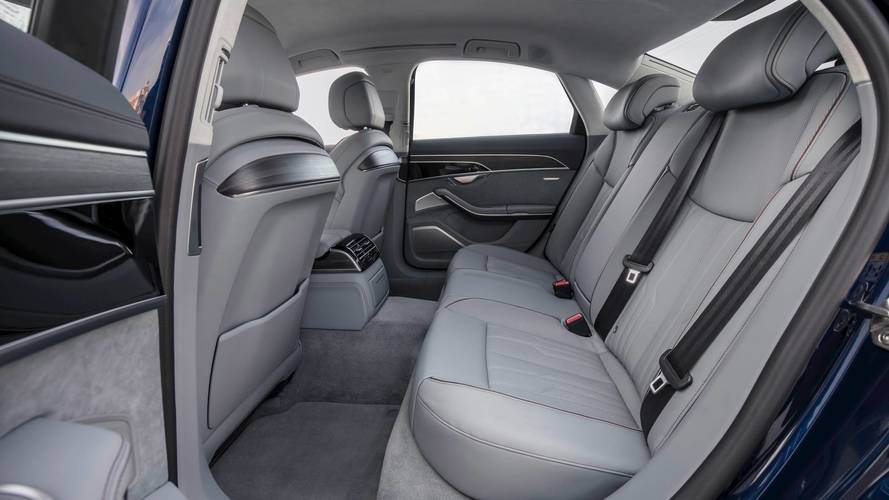 Slide into the back seats and you have acres of room even in the standard car, while you could virtually practice yoga on the floor space behind the front seats in the L model. That is if the heated, massaging footrest hasn’t been added to take up the space.

You can also add two removable touchscreens in the back, as well as a small, touchscreen rear-seat remote that controls both of the heated and cooled, massaging, reclining rear seats and is standard on the A8 L. The non-extended A8 gets a more conventional three-seat rear bench as standard rather than the two-person, lounging extravaganza of the A8 L. 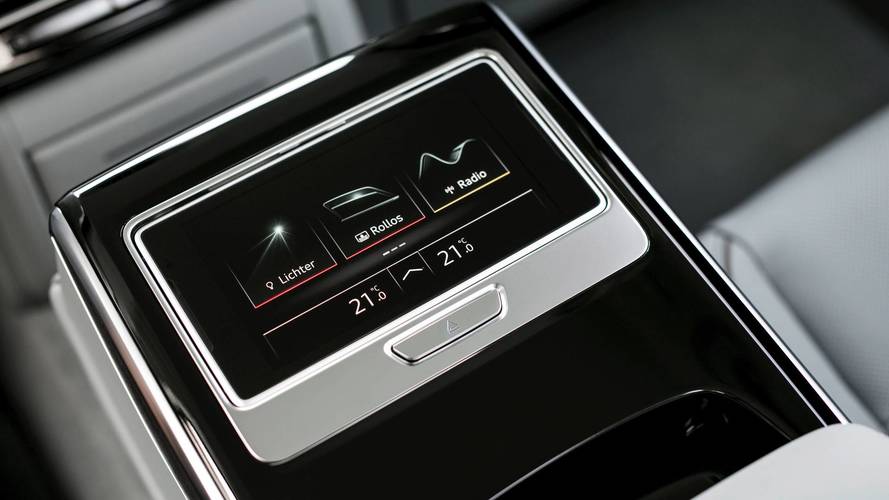 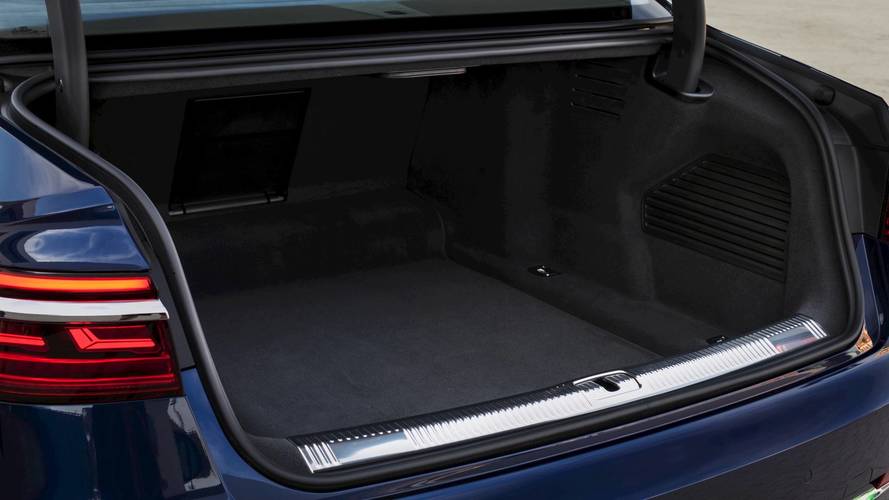 Well, eventually the A8 will literally drive itself. This is the first model in the world that can be specced with a fully autonomous mode, albeit one that only works up to 37mph and on dual carriageways. Even so, you can actually take your hands off the wheel, and sit back and watch TV or do whatever takes your fancy while the car tackles your inner-city commute.

The gaping caveat to all this is that the ‘AI Traffic Jam Assist’, is currently not legal anywhere in the world. So at the moment it remains very clever tech that we can’t take advantage of until the law catches up, and that’s likely to be years away.

Until then, we’ll have to live with a car that can merely park itself remotely via an app, brake itself when it senses a car or pedestrian, deliver advanced lane assist and adaptive cruise control, and talk to other cars on the road in order to warn the driver of pending traffic or safety concerns. Virtually stone-aged, I know… 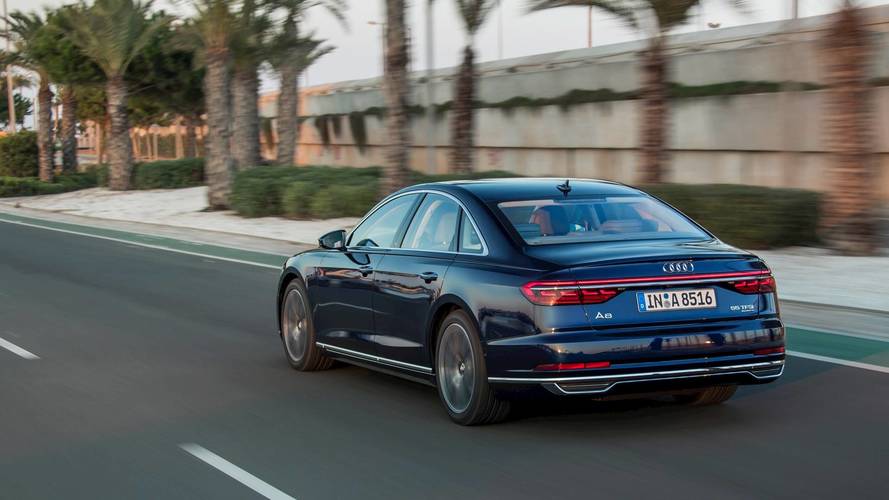 Anyway, the A8 is in fact a very lovely thing to drive. Supremely slick on every front. Our A8 50 TDI, which is the 3-litre diesel, was supremely slick.

Our A8 50 TDI, which is the 3-litre V6 diesel, emits a subdued mutter as you build revs but it’s not an unpleasant noise and it dies away as soon as you ease off the throttle. It’s also really smooth and progressive to respond when the engine re-starts in staccato driving, too.

Stick the A8 in Dynamic (drive modes are standard) and it serves up impressively tidy direction changes. Our car came with the optional four-wheel steering and 'Dynamic' variable ratio rack, which work very well. Turn-in is a little sharper than you might expect in faster corners, but it’s a predictable and enjoyable steer that offers more handling panache than physics suggests should reasonably be possible in a 5.17-metre, two-tonne car. 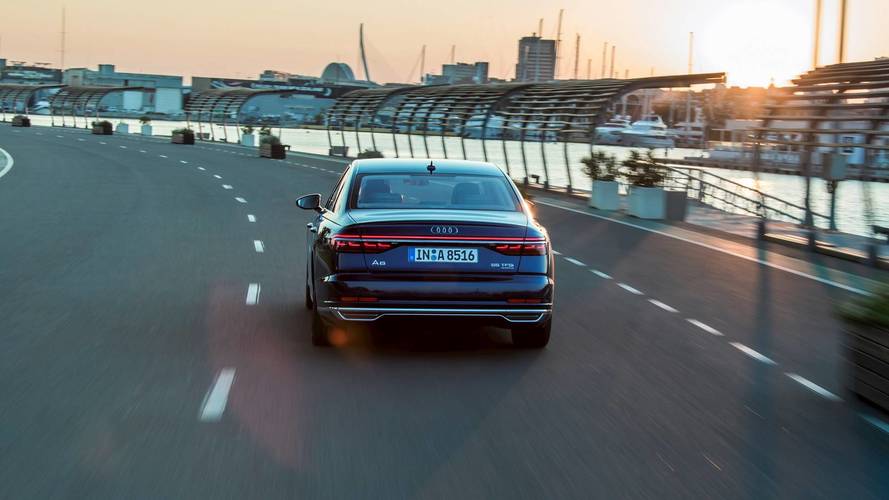 This new A8 is 24 percent stiffer than the old one, which will help a lot, but the excellent standard adaptive air suspension and ever-capable quattro four-wheel drive makes the A8 feel more nimble than you’d generally expect of a big limo.

Adding that four-wheel steering also brings a turning circle of just 11.1m, which is flipping impressive since it’s basically the turning circle of a family hatchback. All of that, plus the light but precise steering, helps to make the A8 a doddle to thread through town at low speeds just as it is a crushingly effective motorway cruiser, albeit one with a fraction more wind noise up front than you might expect.

What we’d do is stick the A8 in Comfort and leave it there. The ride is pillowy soft, isolating you from just about everything going on under the wheels, yet body control is still neat and the control-weights satisfying enough that it’s enjoyable to drive while being smug-inducingly comfortable.

Which brings us onto one final round of technical wizardry that’s worth a mention – Audi’s new Electronic Active Body Control. This predictive, electro-mechanical suspension uses a camera to gauge the speed bump or pothole you’re heading for, and then employs electric motors to lift any individual corner of the car’s body by up to 11cm.

It effectively reduces, if not entirely negates the pitch and roll of the car’s body, and in the demonstrations we experienced it was almost unsettlingly good. We’ll have to wait and try it in the UK – which won’t happen until it makes it onto the A8’s options list in mid-2018 – before we can say for sure if it’s worth adding or not. 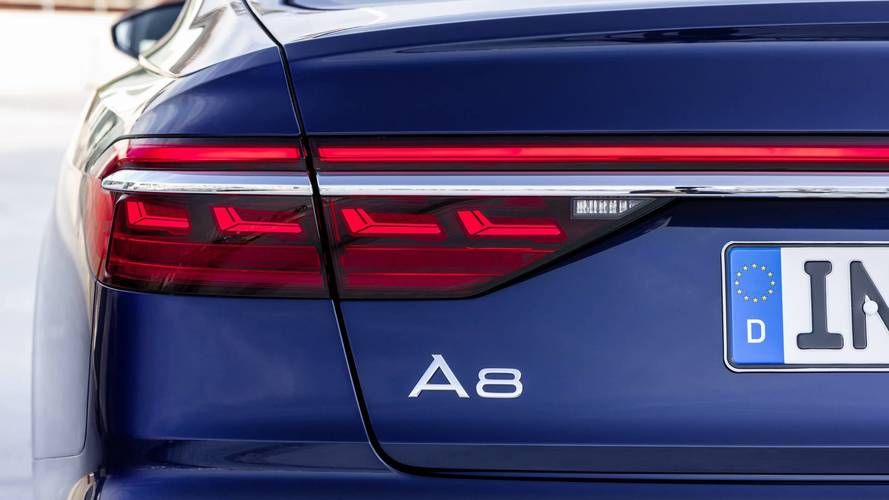 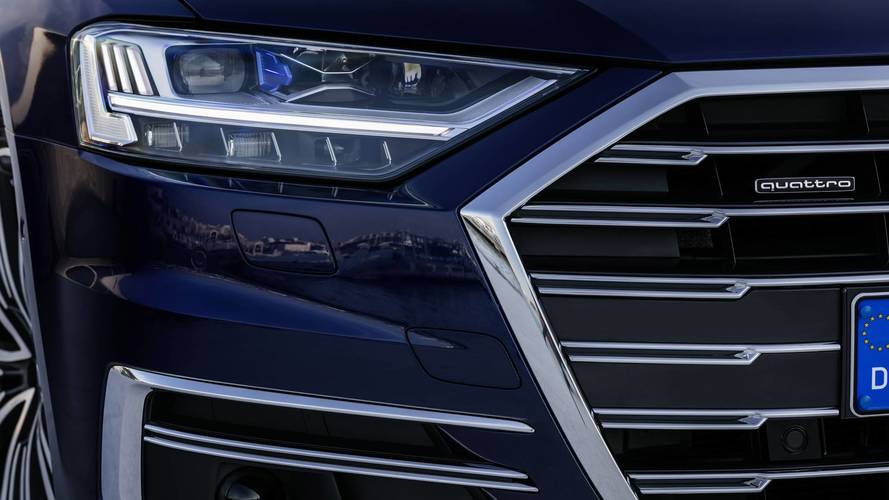 Yes. But probably not right now. The Audi A8 goes on sale later this month, but much of the really interesting tech – chiefly the electro-mechanical suspension, the plug-in hybrid model, and the advanced autonomous parking system – is all due to arrive next year. Particularly for those getting an A8 on company car schemes, the plug-in hybrid could well be a no-brainer.

Having said all that, the ‘standard’ A8 TDI is a deeply impressive thing. The interior is superb, both ergonomically and aesthetically, and the touchscreen is easier to use than Merc’s rather control-method heavy system, if perhaps not as intuitive as BMW’s iDrive. Plus, it’s calming and enjoyable to drive, and is well-priced given the extensive standard kit list.

Honestly, in a class of cars that all stick a flag firmly in the fertile soil of future technology, we’re going to have to drive them back-to-back in the UK to make a final judgement. But what is certain is that this A8 is a giant leap on from its predecessor, a deeply wonderful luxury car even by the standards of any of its rivals, and a mighty fine reconnaissance vehicle into the ever-looming wilderness of autonomous driving.