Does the Aston Martin DB11 miss its four cylinders?

The Aston Martin DB11 is the first of a new generation of models from the sports car company entering its second century of business and a shining example of British design, engineering and manufacturing.

Visually, there’s very little to distinguish the V8 and V12 DB11s. There are new wheels, fewer bonnet vents and some dark headlamp bezels but that’s it. The design remains both clever and striking, from its cut-off side strakes, relieving air pressure from the front wheelarches, to the vents in the C-pillar, funnelling air through to the boot and out through a slit on the bootlid, creating a vertical jet of turbulent air that acts as a virtual spoiler.

Under the bonnet, the changes are more noticeable. Where once sat a 60-degree V12 now rests a much shorter, wider and lower 90-degree V8, mounted entirely behind the front axle. The engine has been sourced from Mercedes-AMG – parent company Daimler owns a five percent share in Aston Martin – and features a re-designed sump to align both engine and transaxle. All the bits known to engineers as ‘tuneables’ are also different, including the air intake, throttle mapping and exhaust. Rest assured this V8 sounds entirely like an Aston Martin, though it doesn’t possess Aston’s prolonged starter motor whine before blaring into action.

Another benefit of the Daimler association is in allowing Aston Martin access to specific technology, like Merc’s electrical architecture. Items such as satellite navigation or Blind Spot Indication (both available on the DB11 V8) are hugely expensive for small independents to develop so its inclusion will help Aston compete against the metronomic precision and reliability of other German rivals such as Porsche or, er, Bentley.

Quite simply, this is the best Aston Martin we have driven. The DB11 V8 may be nearly 100 wild horses down on the V12, but it’s also 115kg lighter in the nose, so with a 0-62mph time of 4seconds flat, it’s only one tenth of a second slower.

What you’ll be more impressed by here is the handling. Losing the equivalent weight of a very large man hanging onto to the front end has shifted the weight balance marginally from front to rear in a 49:51 ratio and that helps the car feel much more alert. You immediately notice how eager the V8 is to tuck into a tight corner, but also how composed and planted the rear axle feels when cornering. By comparison, the V12 is a softer, more unruly beast that constantly struggles for traction. The V8 also begs the question: do you really need 600bhp from your GT car, when a mere 500bhp is so ample?

You certainly don’t miss the additional performance here. In fact, with weightier, more direct steering and a wonderfully tuneful engine, the V8 is the sportier car while still brimming with character and drama. It doesn’t quite let you swap out your Church’s brogues for a pair of Alcantara boots, but for a big GT, it feels lithe and engaging in a way that makes the current Bentley Continental GT feel like a bit of a barge.

Of course, there remain a few niggles about the DB11’s packaging. The car feels large, but the cabin doesn’t, junction visibility isn’t good because of that vast expanse of bonnet and the rear seats are better used for bags than they are people. But still, we’d be willing to travel light.

In the UK, the difference in price between the DB11 V8 and V12 is a nominal £13,000. That’s the sort of change you could lose by ticking a special colour. The aural allure of a V12 is still pretty tough to beat, but the V8 is the more rounded, more polished car and the one you’d feel much more comfortable in dispatching mile after continental mile.

Like the very best Astons, the DB11 V8 is emotive, engaging and enjoyable to drive. It’s one of Aston’s finest grand tourer, and the new V8 engine bodes well for an even more aggressive, more exciting Vantage. 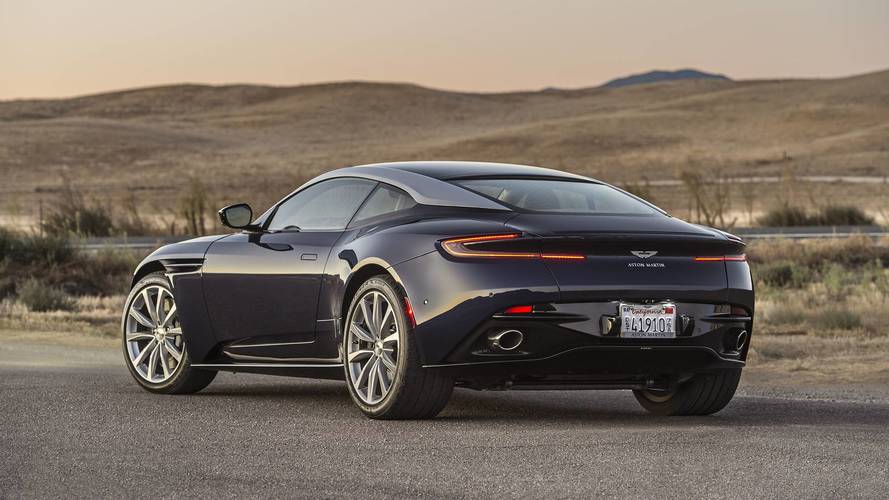