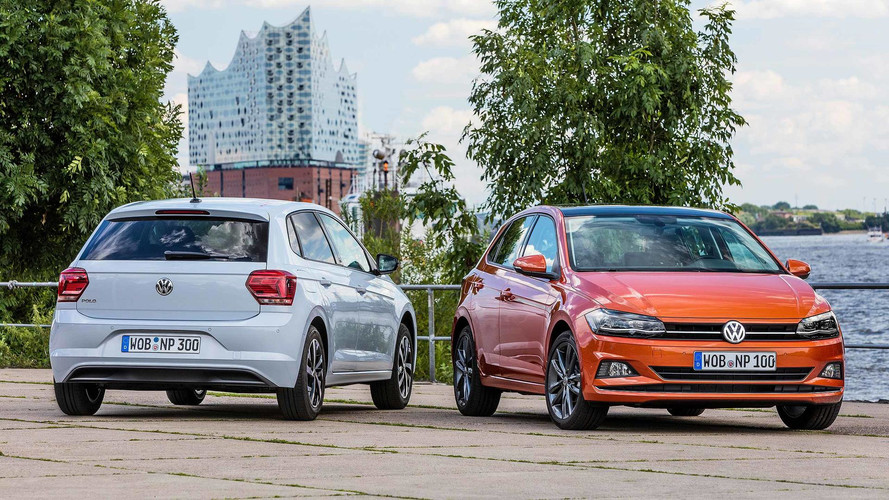 Volkswagen rejuvenates the Polo to take on the latest Ford Fiesta and impressive Seat Ibiza.

The VW Polo needs little introduction, being something of a household name these days; it’s a default choice if you’re after a small car that’s safe, cheap to run and has a touch of upmarket appeal that rivals like the Ford Fiesta and Seat Ibiza fall short of.

Did you know? The Polo has grown for this generation

The five-door-only Polo has grown a bit for this generation; it’s now slightly over 4-metres long, although it’s worth pointing out that rivals like the Seat Ibiza (which is on the same platform as the Polo), and even the Ford Fiesta, are much the same size. The supermini just isn’t really very mini anymore. You can read about in the Interior and Comfort section below, but the key thing is that the Polo is still just about compact enough to suit city life.

It looks sharp, too, albeit the design is perhaps a bit busier than the Golf’s appealingly clean lines. If anything, it’s easy to confuse the Polo with a Golf from the front, although the pert rear bumper and square rear lights are very distinctly Polo, and are reminiscent of the last generation.

You can also now add various stripe decals to complement any of the 14 body colours on offer in the Polo, so it’s now a rather more style-led proposition, should you want it to be.

This is the real star turn of the Polo. The dash feels solidly put together, the standard 8.0in screen is high-set so you can see it easily, and the driver’s dials are clear and easy to read whether you opt for the fully digital setup or the simple, standard analogue dials.

The driving position is good and offers enough adjustment to suit most drivers, although we do have a quibble with forward visibility; the windscreen is now more raked back than before on the Polo, and so you sometimes have to crane your head around to see past the pillars for a good view onto junctions and roundabouts.

Otherwise, the air-con controls are dead simple and everything is where you want it to be. You can also add brightly-coloured interior inserts to match a funky spectrum of exterior colours now offered, although to be honest we reckon the coloured trim looks a little aftermarket and out of place in the Polo’s very straightforward dash architecture.

We’ll start at the back, because the boot is quite remarkably huge – bigger even than that of a Ford Focus, and some 60 litres bigger than a Ford Fiesta’s. Sure, the load lip is a bit high, and you’ll likely have to pay extra to get the variable-height boot floor (there’s a step up from the boot floor to the folded rear seats if you don’t add it), but the space on offer means that you could chuck a sizeable buggy in with relative ease.

Not only that, but the five-door VW Polo also has very good rear passenger space, with plenty of head and legroom to cater well enough even for a couple of average-sized adults. Our only quibble is that the roofline does dip a bit over the rear door, so bending in to strap a child in carries a head-bashing risk if you’re not paying attention. Even so, this is one of the roomiest cars in the class – only a Honda Jazz is more practical – so this is a serious contender for small families as well as for anyone else after a small car.

VW is yet to confirm all the spec details for the Polo, but it has confirmed that an 8.0in colour touchscreen system will be standard across the range. To put that in perspective, an entry-level Ibiza gets a 5.0in monochrome screen, while the base Ford Fiesta gets a 6.5in screen on most models. So VW is certainly leading the way with the big, glossy screen in the Polo, and of course it’ll be available with Apple CarPlay and Android Auto, which is likely to be an affordable option.

It’s a user-friendly system, too; the icons are big enough to hit with relative ease, it’s easy to see even in direct sunlight and the shortcut buttons either side of the screen aid menu-hopping. It’s frustrating that you have to prod your way through a couple of sub-menus to input a postcode, which seems to have been sidelined in favour of street address entry, but otherwise it’s a logical system and certainly one of the better outfits.

Performance
The core of the VW Polo engine range is an array of 1.0-litre three-cylinder petrol engines, offered with 64bhp and 74bhp, or turbocharged units churn out 94bhp or 114bhp. There’ll also be a 148bhp 1.5-litre turbocharged petrol engine, and a full-on 2.0-litre GTi model. Diesel offerings come in the form of two 1.6 models.

We’ve driven the 74bhp manual and 94bhp seven-speed dual-clutch automatic petrol models, both of which are notably perky and fit for purpose. The turbocharged engine is particularly peachy; quiet and responsive at low revs, and then full of burbling energy if you choose to let it rev into the upper ranges. It’s rare for an efficiency-first engine like this to be such a pleasure to use in all sorts of driving.

The non-turbocharged engine is also very good, but you do have to work it quite a lot harder to get a decent hustle on, so it feels more at home around town and a touch wheezy out on the open road, where the turbocharged motor feels in its element even at motorway speeds. Still, if your mileage predominantly consists of urban pottering then the non-turbocharged 1.0-litre engine will be more than fit for purpose. The free-shifting, precise five-speed gearbox is no chore to use in traffic, either (you get a six-speed from the 114bhp 1.0-litre engine), and the light clutch pedal also helps to make the manual Polo feel sweet even in the usual city ebb and flow of traffic.

It used to be almost impossible to justify an automatic small car, but that’s the case no longer. The seven-speed dual-clutch auto offered on the higher-powered engines in the Polo range is a well-sorted gearbox that only enhances the sense that the Polo is basically a slightly smaller Golf – it’s that grown up these days. With the auto ‘box on the 94bhp engine we tested, you wouldn’t even flinch at serious daily commute mileage; it’s no hassle to drive at all.

Handling and comfort
There’s real composure to the Polo’s ride and handling balance. The steering is light but builds enough bite as you wind lock on to keep you in touch with what’s going on at the front end, while body lean is moderate and progressive so you don’t really notice it unless you really fling it through a sharp direction change.

Ride comfort is good, but does noticeably improve if you add the optional adaptive dampers. The 1.0 75 that we drove on standard suspension and certainly made light work of bumpy roads, but it still tended to bob about a bit restlessly, which is fairly typical of small cars. The adaptive dampers fitted to the 1.0 95 car we drove helped to settle the car more effectively over coarse surfaces and made it feel a touch more planted and better-resolved provided you avoided the slightly brittle-feeling Sport mode.

The adaptive dampers are likely to be very affordable if the previous gen Polo is anything to go by, so if you can stretch to the extra cost – and particularly if you’re doing high mileage – this chassis upgrade is well worth adding.

The Polo is at the forefront of safety standards in the small car class. It gets an automatic emergency braking system as standard, which functions up to 31mph and can detect pedestrians as well as other cars, and will brake for you if it senses an imminent collision. Add the optional adaptive cruise control, and the car will not only keep its distance from the car in front when cruise is active, but will also come to a halt even from motorway speeds, and – if you’ve added the automatic gearbox - will accelerate and brake with the flow of stop-start traffic.

Other optional driver aids include blind spot warning, LED headlights (LED daytime running lights are standard on all models) and a self-parking system where the car will steer itself into a space while you just control the throttle and brake.

This is on top of the usual gamut of driver aids including electronic stability control, hill-hold assist and tyre pressure monitoring (which warns you if a tyre loses pressure).

There are seven airbags, including a driver’s knee airbag, and three sets of Isofix fittings.

Euro NCAP is yet to crash test the 2018 VW Polo, hence it falls short of our full ten star safety rating. If it does as well as is expected, then we’ll bump it up to the full complement of stars.

Colours
VW has upped the style ante with the 2018 Polo in an effort to stamp out the car’s reputation for being, well, a bit boring. Now you can pick from 14 body colours, including some brighter shades like the distinctive metallic orange, although they’ll set you back a few hundred quid. There’s also decals on offer, with contrast stripes and the like if that takes your fancy. Predictable as it sounds, we’d stick to one of the safer shades – white looks great – if you want to protect your residuals. The Polo itself appeals to a huge array of motorists, but bright orange paint and bonnet stripes – even the tasteful, slimline stripes that VW offers - appeals to a rather more niche audience.

Trim Levels
VW is yet to confirm its UK trim lineup and the full equipment details of it, but expect the usual S, SE and SE-L trims. A top-end Beats model will also be offered, complete with a Beats audio system and a spec tailored to a younger driver. We’ll update this review as soon as VW confirms the UK specs for the Polo.

The Polo should be an appreciably cheap car to run by any standard. Its engines are generally very efficient, although notably the Ford Fiesta 100ps Ecoboost betters the VW Polo 1.0 95 on emissions and economy, so will be cheaper on company car tax and marginally on fuel, as well. Even the 1.5-litre petrol should be efficient as it can switch off two of its four cylinders when it doesn’t need them. There’s always the diesel Polo if you want an economy champion, but the higher purchase price and what’s likely to be steeper depreciation than that suffered by the popular mid-range petrol models may well offset the savings you make on fuel. When VW has confirmed prices and there are reliable re-sale value forecasts, we’ll update this section with more information.

Volkswagen is yet to confirm pricing for the Polo, but it has said that it’ll likely start at around £13,500, making it reassuringly more expensive than its rivals by circa £500-£1000. Historically, better re-sale values on the Polo have helped to justify its cost, along with the more premium badge and interior feel of the car. Of course, PCP finance costs are likely to be seriously competitive. We’ll bring you all the info on purchase, finance and company car costs when VW confirms UK pricing.