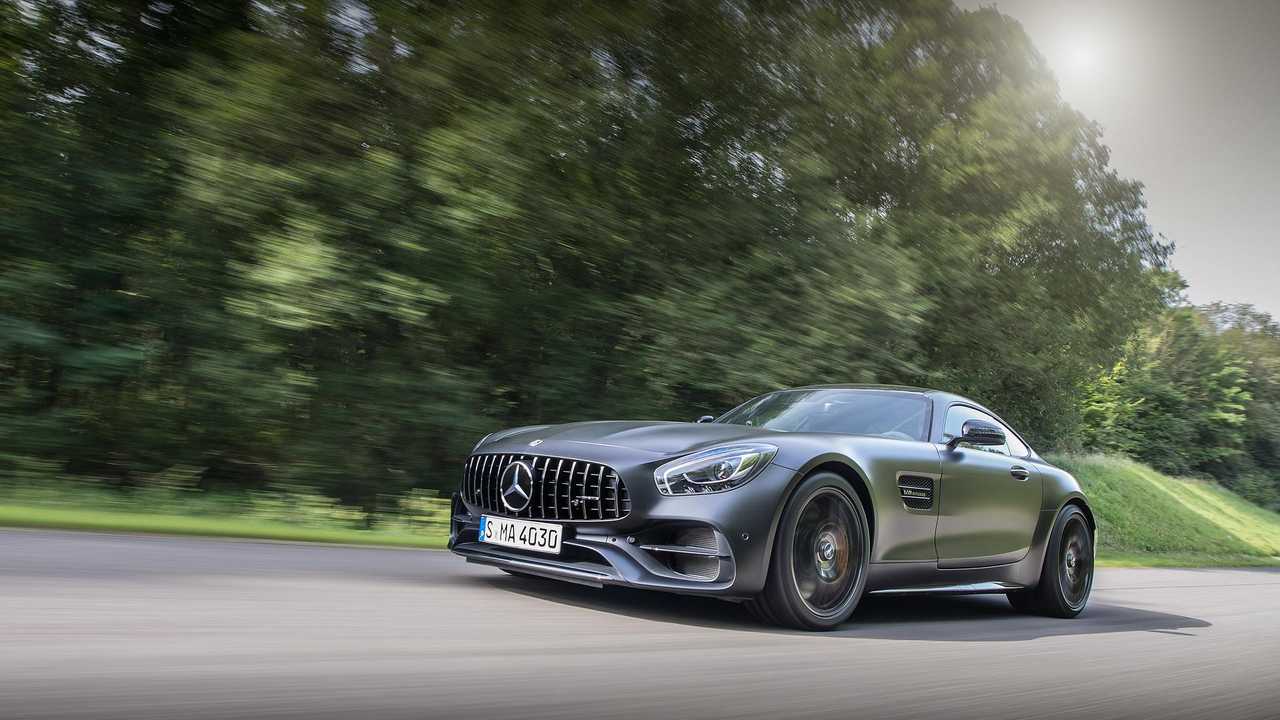 As electrifying to drive as it is to look at

The big news here is that Mercedes-AMG has introduced a full range of coupe-bodied models to the AMG GT range, all of which come with rear-wheel drive, a twin-turbocharged 4.0-litre V8 and a seven-speed dual-clutch auto. If you can ‘only’ spare £97k (I wouldn’t expect much sympathy), you’re looking at the entry level 469bhp AMG GT. Next up is the GT S, which gets adjustable dampers, 515bhp, and of course the 577bhp AMG GT R is king of the AMG GT castle.

We’re focussing on the 550bhp AMG GT C Coupe - the middle-weight of the GT family. It wades in with many of the GT R’s dynamic tricks, including wider rear track, rear-wheel steering, electronically-controlled locking rear diff and different turbochargers to the less powerful models.

Now, the reason this GT C Coupe looks particularly ‘evil baddie’ is that it’s currently only available as an Edition 50. That means that you can have it in the graphite grey magno paint you see here, or matt white is the sole other option. If you’re not won over by either of those then you can always wait for the all 500 of the Edition 50 cars to sell, and then you can have a standard series-production GT C Coupe - and it'll cost some £12k less than the £140k Edition 50. Or you could buy the GT C Roadster, which is already available without the Edition 50 stuff.

The looks? Well, you can see for yourself. We think it’s stop-you-in-your-tracks spectacular. Let’s face it - that and the fulsome V8 soundtrack are the very first reasons you’d buy a Mercedes-AMG GT.

The downside to that styling is that it’s tricky to see where the bonnet acreage ends, and the cabin can feel a touched cramped for taller drivers (who might wish the electrically-adjustable seat would slide back a tad further).

Even so, there’s loads of support from the deep sports seats, the dash looks really cool and is reasonably easy to use, and the alcantara steering wheel is just lovely to use. You also get a Burmester sound system as well as a full gamut of comfort and media equipment.

The coupe’s boot is much more useful than the Roadster’s as the boot opening is way bigger and you get more load bay space. So if golf is your thing, then the Coupe is a much better bet.

We drove just about every flavour of AMG GT (I know, it was hard work) and can report that there are serious reasons to buy the GT C over the lower-spec models. The wider rear track and other dynamic upgrades translate to a fluid, confident cornering ability that noticeably shades the slightly more nervous-feeling AMG GT and GT S.

Don’t get us wrong – the lesser models are still a delight to drive – but they do fall short of the composure and organic handling ability of a Porsche 911 or McLaren 540C, where the GT C is usefully closer to them. Subtle it may be, but if you have plans to drive your super-sports car on track or with real intensity, the GT C feels well-suited to it where the standard GT and GT S are a fraction more fast cruiser than focussed sports car.

There’s reasonable grip levels, too. Balance the car properly into a corner and you can really lean on it, enjoying massive cornering speeds and enough communication to let you know when you are running out of grip. On which note, the traction control system has a setting for every occasion (including fully off), and is pleasingly un-intrusive yet effective.

You might think that the flip-side of the sharper handling of the GT C would be an uncomfortable ride, but the adaptive damping (standard from S model up) makes it easily liveable. It is a stiff car and that shows in a slightly brittle low-speed bump absorption, and some chatter over scruffy urban roads. But generally it takes the sting out of the worst road surfaces and isn’t unsettled by mid-corner bumps and undulations either, which is nice to know in such a powerful, rear-wheel drive car.

And that quick but consistently progressive steering means that you could use any GT model in just about any situation. Seeing out of the car and exiting junctions without sticking the bonnet into the traffic flow is by far the more significant irritation around town than the way the car steers or responds to throttle inputs.

Then there’s the engine. It has heart and soul, this engine. The way it sounds, the way it rips through the rev range, the way it makes you go all delirious and light-headed when you pin the throttle; there is shock and awe running through its lines as surely as there’s fuel and air going into its eight cylinders.

And it sounds like nothing else. Nothing. Not a McLaren, not a Porsche, not even the wondrous V10 in the Audi R8, not even any Ferrari or Lamborghini. It sounds like a big-block V8 American muscle car, only the noise is coming from a modern German sports car, and if that doesn’t sound good to you then you’re no enthusiast in our books.

We’ll keep this simple: the Mercedes-AMG GT does not handle as precisely as a Porsche 911 Turbo or a McLaren 540C, and the Porsche would also be easier to live with (or more specifically, see out of).

In truth, the Mercedes-AMG is a very different thing to any of them. It’s a sort of hedonistic sports-muscle-supercar GT thing, and it’s wholeheartedly and unashamedly different to anything else. And that’s brilliant. In fact, it’s all the more spectacular for being so obviously its own character. If you look at it and think you’d love it, then you absolutely will. It is as electrifying to drive as it is to look at.

Just one thing – if you are thinking of going on track as well as driving to your St. Tropez house for a getaway every few months, the C is worth the extra cash. If you’re not, the cheaper models will do you. And I guarantee, you’ll never step out of it thinking that a Porsche 911 would have been more fun. Not even a little bit.