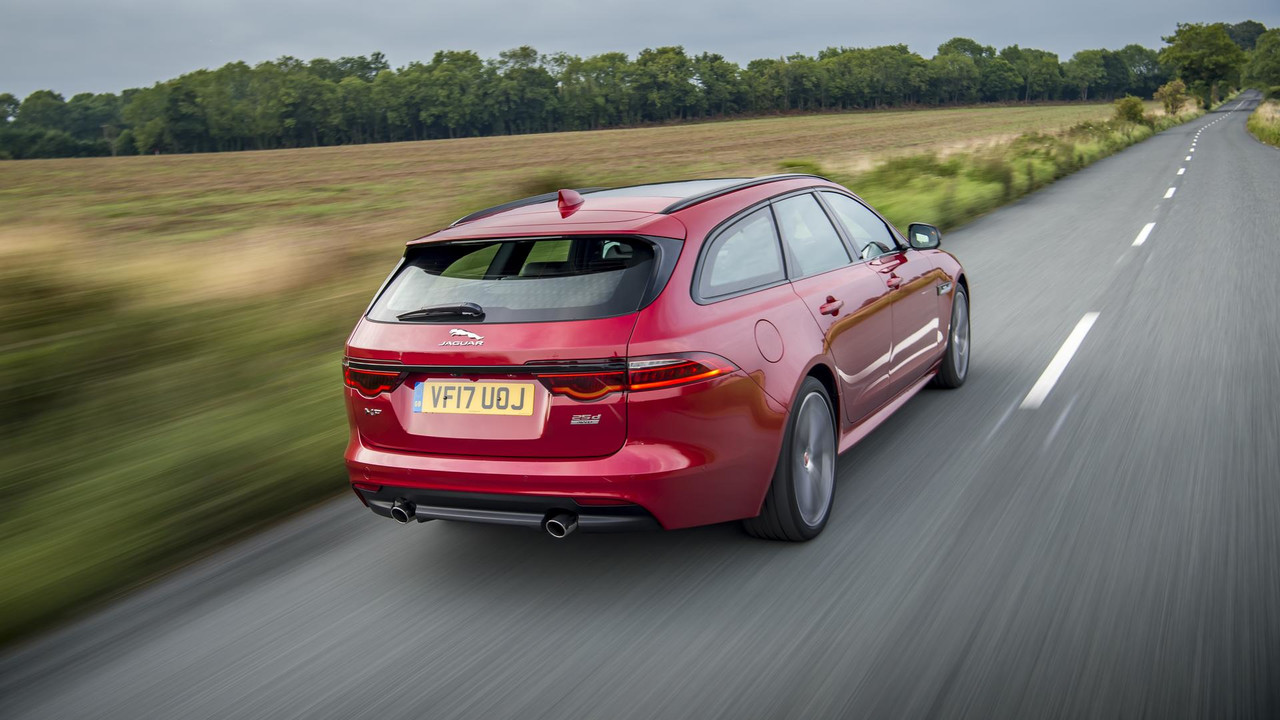 Stylish, great to drive, and practical.

Blimey. All the desirability and sexiness of a Jaguar, but with big estate practicality. What’s not to like?

Well, not a lot, actually – the Jaguar XF Sportbrake is one of those cars that seems to do it all.

It is, of course, much the same as the very swish Jaguar XF saloon, only the boot has been boosted to 565 litres (or 1,700 litres with the rear seats folded), which is a smidge under a BMW 5-Series Touring’s boot capacity.

To our eyes, the XF Sportbrake looks great – particularly the F-Type style rear headlights, which notably have only one rounded dip in them, rather than the saloon’s twin dips. Maybe the proportions aren’t quite as sleek as the saloon, but styling is still going to be a significant reason why you’d go for the XF Sportbrake over rivals like the BMW 5 Series Touring and Volvo V90.

So, outright capacity is very good and the practicality boxes are all ticked, too. You get the rails with sliding lashing eyes in the boot floor as standard, plus a couple of bag hooks and rear seats that you can fold in a 40/20/40 split via levers in the boot.

There’s even a panel in the side of the boot that you can take out in order to free up exactly the right amount of room required for a set of golf clubs to lay across the loadbay, while the boot itself is well-shaped, with squared-off sides and a low load lip.

Our only quibble is that there’s nowhere to store the loadbay cover under the boot floor, and you don’t get the huge underfloor storage space that makes the Mercedes E-Class Estate the most practical wagon in this class.

Another big plus for the Sportbrake over the standard XF saloon is that there’s usefully more rear headroom – circa 40mm more, so it really does feel like a properly airy, spacious place for two adults to lounge about in. A middle passenger’s going to have to straddle a chunky tunnel in the floor, though.

Otherwise it’s pretty much the same as the saloon up front; that means a low-set driving position, and posh-looking dash characterised by cool trademark Jaguar visual touches like the rising, rotary gear lever.

The 8-inch touchscreen (or 10.2-inch if you get the upgraded system shown here) is the focal point of the whole thing, and you get sat-nav, DAB, USB, Bluetooth and Apple CarPlay and Android Auto as standard, but it’s one of the least intuitive systems in the class. Sure, it’s reasonably easy to plug in a postcode or do any of the major stuff, but as soon as you want to access a sub-menu or one of the less obvious functions, it can be a bit of a pain.

Jaguar has gone to pains to make the Sportbrake handle just like the saloon – quite rightly too given that it’s about the best handling car in the big saloon class.

Significant mechanical changes for the estate include self-levelling rear air suspension and tweaked front suspension to account for the extra weight (roughly 115kg over the saloon). And it doesn’t take long in our 237bhp, twin-turbocharged, 2-litre four-cylinder diesel to realise that Jag has succeeded.

The steering has a lovely, oily build of weight and progressive response, whether you’re pottering about at town speeds or making the most of a decent road, which allows you to make the most of the well-sorted chassis.

This higher powered four-cylinder diesel is only available with Jaguar’s active all-wheel drive system, which sends 90 percent of the engine’s significant torque is sent to the rear wheels unless it senses slip, when it shuffles drive about to maximise traction levels and stability.

It works very well, too. Combined with that wonderfully satisfying, communicative steering, this setup still makes the XF feel pointy and precise – a properly keen driver’s car – while also removing the occasional flash of the traction control light that you might get in the rear-wheel drive car.

Sure, if you really push on into a fast corner, then the all-wheel drive system hands you understeer where the rear-wheel drive car would let you balance the car on the throttle for a more exciting on-the-limit experience. But we all know that’s virtually irrelevant in a car like this. Most buyers want four-wheel drive for the all-season peace of mind it brings, and this delivers just that, without compromising the XF’s everyday handling panache.

Mind you, our car did come with the optional all-round adaptive suspension, and the adaptive surface response system – the latter being a clever setup that predicts the levels of grip you’ll need in the next instant and sends power to the appropriate wheels.

These options add £1,000 to the car, but that’s par for the course in this class. Sadly we haven’t yet driven an XF Sportbrake without these systems, but our car rode with real ease over town roads (Dynamic mode makes it a touch brittle over low-speed potholes) and kept its body in check even out on the open road in fast direction changes. We’d be willing to bet – up to £1,000, in fact – that you should add the adaptive suspension.

In terms of the engine, this twin-turbo’d diesel is really punchy, and works well with the standard eight-speed automatic gearbox. It’s quiet on a steady throttle and generally well-suited to the car. It’s not as smooth-revving as some rivals, though, and it sounds tad guttural when you do rev it next to those same more refined rivals.

The other diesel offerings are 161bhp or 177bhp 2-litre diesels and the range-topping 'S' 3-litre V6 diesel. A rear-wheel-drive 247bhp 2-litre petrol is the only non-diesel option.

Absolutely. Emissions and pricing are competitive, although given the jump in CO2 from the lower powered diesels to this twin-turbo model, company car buyers are better off saving a lot of money and living with a less powerful car.

It’s a good retail buy, though, the 25d, albeit only in the knowledge that you are making some sacrifices in order to get those slick, aggressive looks and trademark Jaguar handling magic.

Chief among those compromises is the refinement (tyre noise was particularly noticeable, albeit the big 20-inch wheels of our test car won’t have helped). The infotainment system is another irksome black mark, and the material quality in the XF is also a little down on that of the BMW and Mercedes. Sure, the metals, plastics and leather feel dense and plush enough, but there’s still a whiff of flimsiness in some areas.

Overall, the XF Sportbrake will more than tick the boxes for most big estate buyers There are some quibbles, but they're all minor enough that the handling involvement and general, overflowing ‘want one’ factor that sets the Jag apart from its arguably dowdier rivals more than makes up for it. Is it best in class? We suspect not quite, if only by a small margin. But if you like the looks and feel of it, you should go for it anyway.