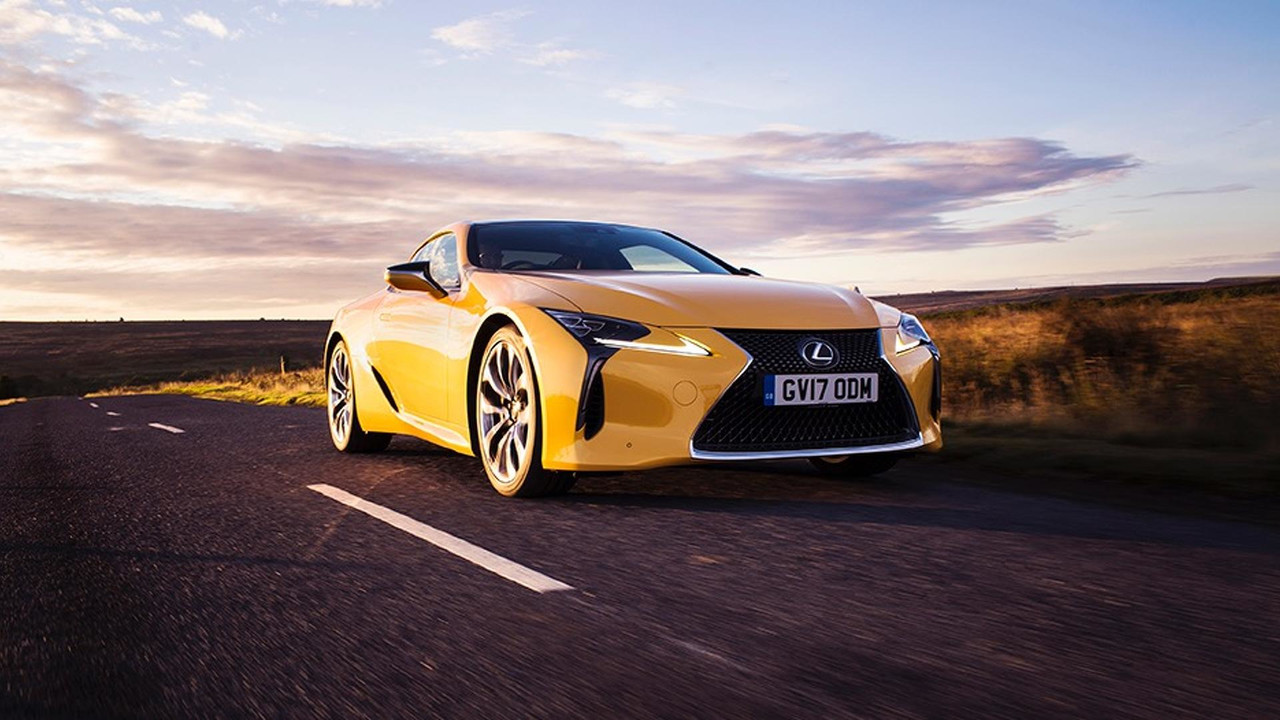 If the looks don't stand you out enough from the crowd, turn the engine on.

Usually concept cars are just that – an opportunity for designers to show off that they’re still alive and that they don’t particularly like all of the terrible regulatory hassle that’s associated with roadgoing vehicles these days. Pesky safety.

The Lexus LF-LC concept back in 2012 was much along those lines – it established the company’s new look and put a bit of emotion into the brand. It was well-received at the Detroit motor show that year, but surprisingly for everyone big boss Akio Toyoda gave the California-penned project the green light for production. It wasn’t an easy job – an entirely new platform had to be developed.

The LC looks like nothing else on the road – with a lot of me-too design around the place, usually led by the traditional German brands, it remains refreshing that there's a company like Lexus willing to be distinctive. That hasn’t always paid off, but here it does. The looks are sharp and bold and will break the ice with literally anyone you drive past.

If the styling doesn’t get you noticed, then turning on the 5-litre V8 engine certainly will. It’s an obscene and wonderful thing – distinctly naughty in a world where eco-credentials are becoming everything, but there’s a hybrid alternative if you really do feel terrible. It very much depends what side of the car’s personality appeals to you – the more comfortable grand tourer appreciates the hybrid, but the roaring sports car demands the V8.

The interior of the LC is a pleasant place, strewn with leather and Alcantara and nicely driver focused – we especially like it in tan. There’s a solidity here and you can feel the quality and effort put into key components. On the whole things are well laid out and you can usefully customise what information you see in the instrument panel and central display.

It’s roomy inside, but despite what the presence of a second row might otherwise indicate, it’s not a proper four-seater. Those chairs are reserved for small children or people you rather hate. The boot isn’t particularly big, perhaps they could have squeezed a little more room from the non-existent rear passengers for some extra luggage. Still, it's nice to have somewhere to keep your wallet.

For some reason Lexus persists with its fiddly touchpad control for its infotainment system, and the sat-nav is hateful. It’s not even that it’s not very good, it’s actively useless. It’s strange to have those two misses in a car that’s so details-oriented: the front seats took 50 attempts before the chief engineer was happy to sign them off. It’s amazing he could find that many things to go wrong with a chair, but if you’re going to miss turns and go the long way round, you might as well do it in comfort.

Lexus’s engineers have tried hard to get a perfect front/rear weight distribution, and the almost-perfect ratio of 52/48 is thanks to measures such as moving the battery underneath the boot floor and getting the driver to sit as low as possible between the wheels. There’s extensive use of high-strength steel, aluminium and carbon fibre-reinforced plastic to cut weight and the engine has been shoved back as far as it will go.

One exciting feature you’ll want to show off to everyone in the passenger seat is the instrument panel – it’s an 8-inch TFT screen, but there’s a physical round dial that sits over the display and the digital speedo nestles within. Press a button on the steering wheel and it whirrs to the right, the display changing with it.

Lexus has billed the car strictly as a grand tourer, so you want it to be able to cruise along in comfort, but it also means that any driver enjoyment is a bonus. Engage with the LC on these terms and you won't be disappointed. We tried it with active steering – a trick system with variable-ratio rack and rear-wheel steering – but found it a little disconcerting. The LC500 works well as nature intended, there’s no need to splash out the extra cash.

Some of the electronic wizardry does work marvellously well, though; Unlike many cars, where different driving modes can be a gimmick, you can really feel the difference in the LC500. Sport+ offers more feedback from the road and a direct throttle response, the exhaust parping as you downshift.

Lexus has fitted a 10-speed automatic transmission to the LC, an automatic Top Trumps win unless the other guy has a truck. On paper it seems rather excessive, but in practice it works a treat. Leave it in automatic and you don’t get the feeling that the car is constantly browsing through the gears, but the electronic brain is constantly assessing how you’re driving and deciding what’s best. The one time any quirks are noticeable is if you’re in Eco or Comfort mode and go for a quick hoof of the accelerator it will be slow to react and then twitchy for the next few minutes as it tries to work out how frisky you’re feeling.

The normally aspirated 5.0-litre V8 engine is a wonderful thing, though, delivering its peak power of 471bhp at 7,100rpm, it encourages you to rev it up and enjoy the sound – especially thanks to the tuning the engineers have done to feed air from the engine through to the cabin so that you can hear the motor even better. There are quicker cars out there, but few as theatrical.

In fact, perhaps it’s easier to say what the options are: the 13-speaker Mark Levinson sound system, a colour head-up display and metallic paint. Just 250 LCs will come to the UK in 2017, with a similar amount expected next year, so you’ll definitely have exclusivity on your side.

Rationally, it’s just not as good dynamically as a Porsche 911, but everyone has one of those and the Lexus gets attention like nothing else – relentlessly positive, too. For our money, the styling and the rarity automatically transcend the LC over the likes of the Jaguar F-Type, BMW 6 Series and Mercedes SL. It's definitely worth a look.