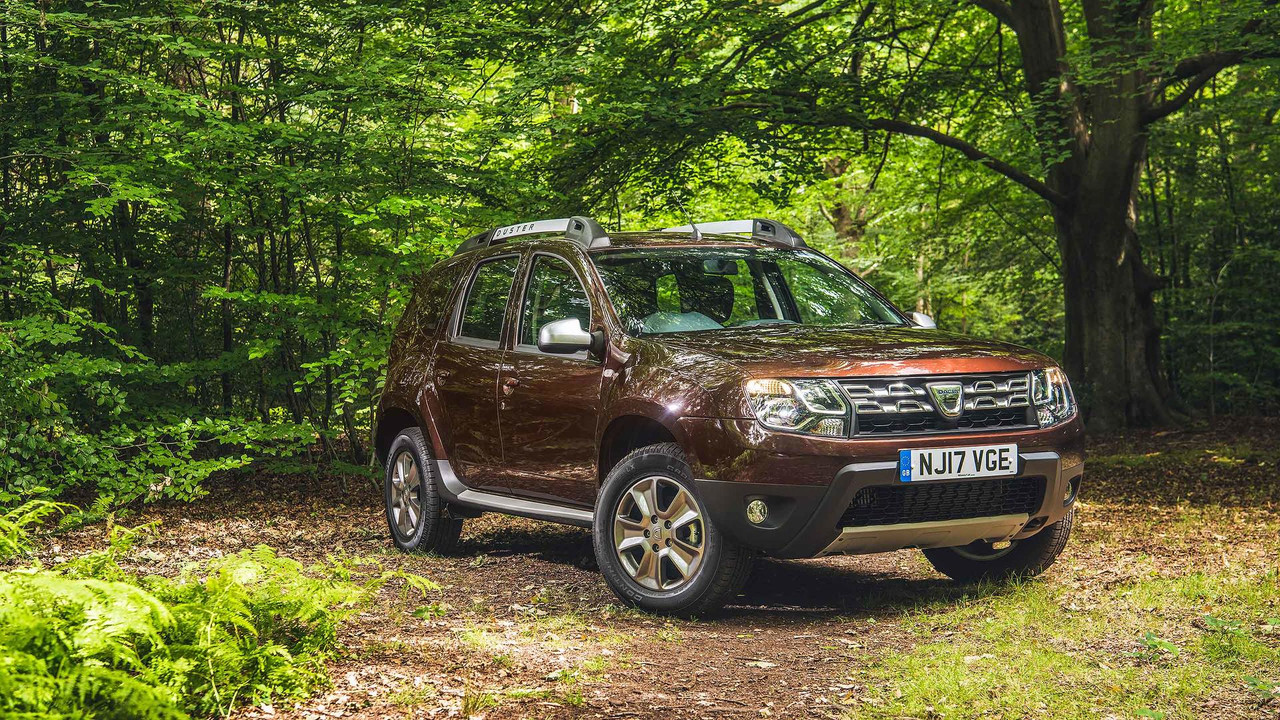 Dacia is a budget brand owned by Renault, and it makes straightforward cars with remarkably low prices – the Duster being a perfect case in point.

This chunky-looking compact SUV is a bit smaller than a Nissan Qashqai but is bigger than a Nissan Juke, and it makes no secret of its chief selling point – the price. Somewhat astonishingly, the Duster starts at less than £10k.

Did you know? Entry-level ‘Access’ trim does without air-con and a radio.

The Duster is oddly charming thanks to its unpretentious honesty. It’s a car that offers space and rugged usability in a remarkably cheap package, and if you don’t like the fact that it’s a bit unrefined, and rather stodgy to drive, then you’ll have to find the extra thousands required to get any other SUV of this size. It falls short in plenty of areas next to those more expensive rivals, but if you simply want a basic, roomy and super-cheap 4x4 then look no further.

The Duster is not about looking cool; it’s about function and affordability. For all that, there is a blocky, rugged appeal the Duster that has helped to earn it something of a cult following despite what you could easily argue was a rather ugly car.

The interior is as straightforward as you’d expect. The simple rotary heater controls are easy to use, and the dials are entirely conventional, but we’d like them to be easier to read in daylight.

Base ‘Access’ trim doesn’t get air-con or a radio, somewhat astonishingly, so the comfort elements of most modern cars are absent altogether. There’s just a couple of cubbies in the dash instead to remind you of your penny-pinching ways as you motor along in silence. Models with the touchscreen system look much better, but ergonomically it’s not great as the screen is set low down in the upright dash, forcing you to look away from the road to see the nav.

Access trim is also the only trim to miss out on a height-adjustable driver’s seat, which will make the driving position adjustment very limited. All Duster models get height-adjustable front seats, but the steering wheel only adjusts for height and not for reach, and added to that is the flat seat that lacks adjustable lumbar support in any trim, so this is not the most comfortable car. At least the seat is set high up and you have a good view out thanks to the boxy styling and tall windows of the Duster.

You have to step up to Laureate trim to get electrically-adjustable wing mirrors, a leather steering wheel, electric windows in the back (all Dusters have electric front windows), and air-con and cruise-control as standard, so it’s in another league compared to the low-spec Duster trims for interior comfort.

Another reason to avoid entry-level ‘Access’ trim is because it doesn’t get the 60/40 split rear seats of the others – the rear seat back just folds down in one piece. Still, all Dusters offer a good amount of rear passenger space – more than you’ll get in a Ford Focus, for instance – and the boot is also very big if hampered by a big drop down to the boot floor over a high lip, and the seats leave a step in the load bay when they’re folded, too.

The Duster is one of very few cars on sale today that is so basic you can have it without a radio. As mentioned above, you get a couple of letterbox-shaped cubbies in the dash instead of a radio if you go for Access trim, although it’s worth mentioning that the wiring for a radio is still present, so you could install an aftermarket unit with relative ease.

Even so, that’s a big fat zero for Technology and Connectivity, so the vast majority of buyers will go for a higher spec car. Mid-spec Ambience does get a simple DAB/FM radio with Bluetooth and USB input, which will serve the essential needs of most motorists, although it looks decidedly old-fashioned given that the readout resembles the screen of a ‘90s Casio calculator.

Laureate is the next trim up, which you have to go for in order to get the 7-inch touchscreen pictured here, albeit at a cost of £450 (and Western European mapping will cost a further £90). In its own way, this system is one of the easier to use on the market thanks to the big icons and simple, tiled home menu that you can always return to with the push of a button.

However, that’s rather undermined by the fact that some of the settings sub-menus are very difficult to find, the graphics are rather childish-looking and outdated, and most importantly the screen reflects daylight very badly so can often be difficult to see.

You can’t add Apple CarPlay or Android Auto to the Duster, but given that nav is standard if you add the touchscreen then it’s not such a drastic issue. Ultimately, the Dacia Duster is behind the times when it comes to Smartphone connectivity and infotainment standards.

There are three engines on offer; a 1.6 petrol is the cheapest option, a turbocharged 1.2 TCe petrol with a touch more power and a lot more torque is the next step up, and a 1.5 diesel the most expensive engine option and the only one available with an automatic gearbox.

We’d go for the 1.2 – it’s well priced, comes with a six-speed manual gearbox rather than the five-speed of the rather underpowered 1.6 petrol, and is more refined than the gritty-sounding diesel model. The 1.2 TCe also has the same maximum braked towing capacity (of 1,500kg) as the diesel, and surprisingly that figure remains the same whether you opt for front-wheel drive or four-wheel drive model.

Having said that, if you do a lot of miles then the diesel is worth considering since it is more economical, and it has a respectably gutsy mid-range response.

All Dusters are quite short-geared, meaning that it can feel like you have to change up a gear almost immediately after you pull away from a standstill, and this is particularly noticeable in the diesel and can make the car a bit tricky to drive smoothly in town traffic as you feel like you’re changing gear all the time.

We haven’t driven the automatic in the Duster, but experience of the same six-speed torque converter transmission (which is only offered on front-wheel drive diesel Dusters) suggests that you’re best off avoiding the rather slow-shifting ‘auto.

However, if you are thinking of off-roading in the Dacia, you’ll be pleasantly surprised by how tenacious this little SUV is. The permanent four-wheel drive is effective at clawing through mud and the like, particularly aided by the Dacia’s short gearing. A maximum towing weight of 1,500kg is a little disappointing, but it will scrabble across the wilderness with more confidence and ability than anybody would reasonably expect it to.

The Duster is a rather stodgy-feeling car to drive. The steering is slow and has a rather rubbery-feeling build of weight as you turn into corners that doesn’t encourage any kind of spirited driving, plus you get a lot of ‘kick-back’ – where the steering wheel squirms about because it’s being tugged about by potholes and the like.

Predictably there’s lots of body roll from the soft suspension, but to be honest the Duster is the sort of car that encourages slow progress anyway, and the lean is controlled enough that it’s unlikely to bother you unless you’re going for a very non Duster-appropriate b-road sprint.

Ride comfort settles at higher speeds, but the Duster bumps and shudders over sharp-edged potholes and rutted surfaces.

Unless you regularly tackle muddy fields or weather harsh conditions for much of the year, we’d settle for a front-wheel drive Duster. You still benefit from the raised ride height when it comes to rural tracks or awkward driveways, and in terms of on-road stability you won’t notice much difference until it gets really icy – and given the circa £2k extra it costs to have four-wheel drive, a set of winter tyres on a front-wheel drive Duster could well be a much more cost-effective way of making your Dacia unstoppable in all seasons.

Ultimately, the Duster is an oddly charming car thanks to its honesty, but it is rather wearing to drive, so you’re not going to relish long journeys.

The Duster gets traction control, six airbags, and Isofix fixings in the outer two rear seats. A space-saver spare tyre beneath the boot is an affordable option on two-wheel drive models, or is standard with four-wheel drive.

Rear parking sensors aren’t even available on Access trim, while they cost £200 on mid-spec Ambient and Laureate. Top-spec Prestige gets a rear-view camera.

The Duster received a rather lowly three out of five stars in Euro NCAP tests in 2011, but the Duster has been updated with more safety equipment since then. Even so, with no lane-assist, blind spot warning or automatic city braking (the latter is becoming standard fare even on city cars), the Duster is quite behind the times and is about the least safe SUV you can buy.

An alarm is also optional across the range as part of the Protection Pack.

The only standard colour in the Duster range is plain white, complete with black rubber bumpers, handles and door mirrors. A metallic paint adds a dash of classiness, although the shades on offer are all fairly bland shades of grey or brown, with ‘Cosmos Blue’ being the only fairly striking colour. We’d settle for the standard white, or go for Nordic Grey which suits the car well.

There are five trim levels, starting with the painfully basic Access trim, which lacks even a radio or air-conditioning. Ambiance is also quite basic but does at least get a radio and body-coloured bumpers, while Laureate starts to add a touch of modernity with alloy wheels, air-con, a leather steering wheel and cruise control.

The Duster is cheap to buy and cheap to run. The diesel will be fairly economical – you can certainly expect around 45mpg, while the petrols will be more like mid-30 mpg.

Given how cheap it is in the first place, the Duster holds its value well, so losses in terms of re-sale values are quite minimal, and insurance costs are on a par with rivals like the Renault Captur, so should be easily affordable.

Dacia is owned by Renault, and its cars are all made up from stock Renault parts, so they tend to be fairly reliable and cheap to fix if they do go wrong. The standard warranty covers three years and 60,000 miles but you can extend that to four, five or seven years with corresponding extended mileage upgrades included. Servicing is respectably cheap, and can be spread out in fixed price monthly costs should you wish.

This is the Duster’s trump card. If you can live with a basic model, it’s getting on for half the price of similarly-sized rivals like the Skoda Yeti, and even if you want a more comfortable, high-spec Duster, it’s still saving you many thousands over any comparable rival.

As you’d expect, finance deals are seriously good. Stick a £2k deposit down on a Laureate DCi 110 front-wheel drive model, and you’ll pay around £200 per month.

Company car users will be slightly put off by the comparably high CO2 emissions on the Duster, but it makes up for that with very low list prices that keep the monthly tax bill very low.