Volkswagen Golf GTI vs R: Which Should You Buy?

We've pitted brother against brother in the interest of science.

So here we are. Months of hot hatch research that originally considered everything from the rabid Honda Civic Type R to the refined BMW 140i M Sport, and you’re back at the archetypal hot hatch: the Golf GTI.

And who could blame you? This car may not have been the first ever hot hatch, but its combination of pace, space and value for money has since been emulated by every car maker attempting to build a hot hatch.

But before you sign on the dotted line for the latest, Mk7.5 Golf GTI, have you considered the Volkswagen Golf R? Think of it as the GTI’s older, bigger brother: more powerful, more refined and instead of using front-wheel drive, it offers more sophisticated all-wheel drive.

True, the Golf R is also a few thousand pounds more expensive, but if you’re buying your next car on finance, the difference between the two models in monthly payments are marginal. Time to find out which model is the best option for you.

If you like keeping a low profile, then both the Volkswagen Golf GTI and Golf R are hot hatches that specialise in anonymity. Some buyers may appreciate how under-the-radar aesthetics can be married to such a rapid mode of family transport, but others may prefer something a bit more extrovert. If you’re in the latter camp, then check out the Ford Focus RS or Honda Civic Type R.

For those reading on, it’s the GTI that offers more presence. Undoubtedly, some of this is down to a lineage that dates back to 1975, but most is down to the brilliant detailing: the red highlights in the headlights, the brake calipers and seats; the honeycomb grille, the tartan trim and golf ball-style gearknob. By comparison, the R with its satin silver highlights and carbon-effect trim looks comparatively tame. If it wasn’t for the quad tailpipes, this car could pass for a regular Golf.

Which one has the better interior?

Those little red highlights aside, it’s a dead heat. The hot hatch has grown up in recent years, and both of these cars sit at the mature end of the spectrum with excellent seating, large, functional infotainment touchscreens, air conditioning, cruise control and safety systems abound. Both models are tested in the more popular, more practical five-door bodystyle, though the Golf R loses 37-litres of bootspace, having to accommodate another set of driven wheels. It won’t be enough to upset the weekly shop, but we’d check if you can still get that Bugaboo to fit.

What sounds better: GTI or R?

Both versions use the same turbocharged 2.0-litre petrol unit, which is both zingy and responsive to input, but neither are the most characterful sounding engines. The more powerful Golf R enjoys bigger fistfuls of noise pumped through the speakers, and it releases more exhaust rumble, but it feels a little flat and synthetic. The GTI’s soundtrack is more muted and not bad, but it’s hardly worth saving to the playlist.

Do the GTI and Golf R drive differently?

Both the Golf GTI and Golf R are sporty cars you can drive with your family in tow every day, with comfort, quality and safety as important as performance. But they do feel quite different, which is entirely Volkswagen’s intention.

The Golf GTI is more playful: it may be outgunned by the current crop of hyper hatches, but it has a lightness of touch to its movement down a B road, with accurate steering and a slick shifting action to its six-speed gearbox. There’s a little bit of body roll, to show you the suspension is working, but it’s never enough to warrant your rear passengers taking travel-sickness pills.

The rear doesn’t adopt dizzy angles if you throttle-off abrubtly, either - this is no wild Ford Focus RS – which will be assuring for some drivers, but the traction deficit of being a front-wheel drive car on a typically British summer day is quite evident.

There’s no such wet grip issues in the Golf R, which is a consderably less demanding drive. Don’t dismiss this for an absence of performance, mind: the Golf R is noticeably faster, grippier and seemingly impossible to over drive. No matter how unfamiliar you are with the car, the predictability of its chassis and alertness of its responses make you feel immediately plugged into the ebb and flow of the road, and you find yourself going faster, pushing harder. For B roads, this is probably one of the quickest point-to-point cars you can buy at any price.

Which model should I buy?

This depends on what you want from your fast Golf. If it’s raw pace and refinement, the R has it nailed. Not only is it faster, it’s easier to drive fast, thanks to better traction, body control and more composure through corners. True, it does offset a bit of the GTI’s fun and agility for extra competence, but it isn’t enough to trade in that all-weather dominance. And while your annual car tax may be a few groups higher, insurance providers still consider the Golf R to be less of a thief magnet.

If it was our money, we’d actually go for the Golf R Estate. Sorry to throw that curveball at you, but the Golf R is the only version available in an Ikea-friendly bodystyle, which would leave rivals in the shade for both space and pace. As fast family cars go, the Volkswagen Golf R Estate would be a truly brilliant all-rounder. 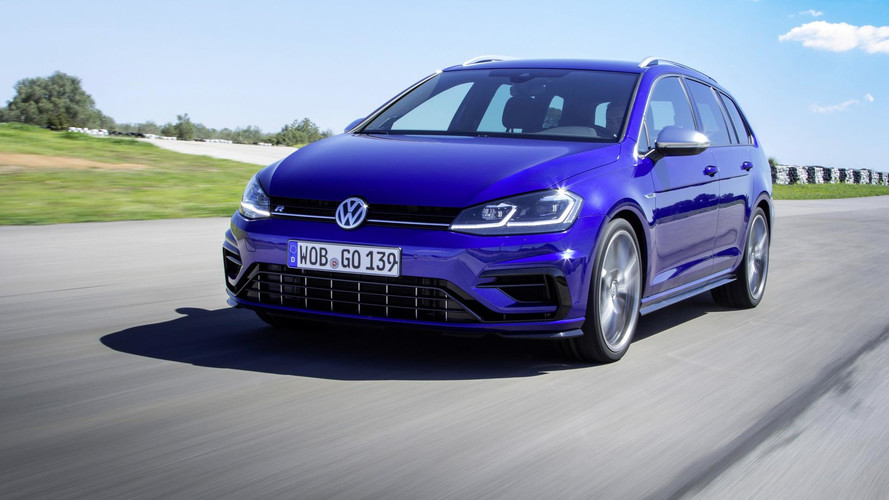 Manhart RS450 based on the VW Golf R