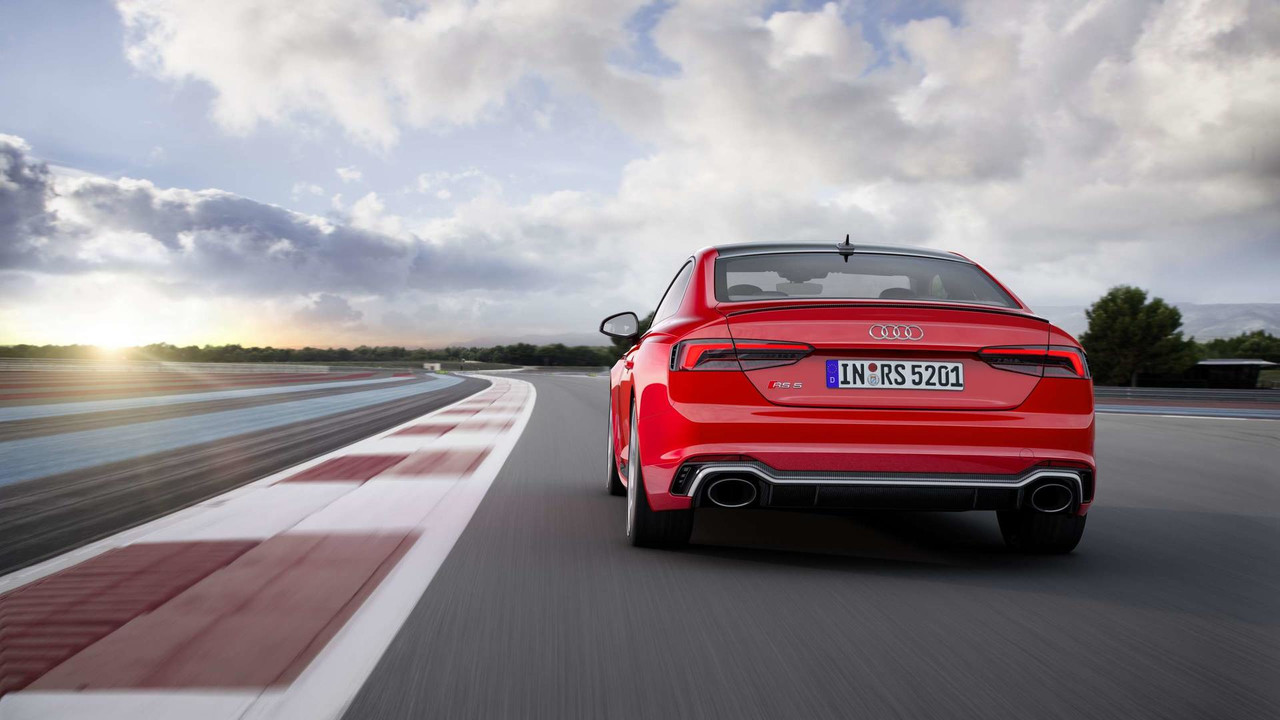 Audi RS 5 downsizes its engine, but punches harder than ever.

There’s an elephant in the room with the new Audi RS 5, or more correctly under its bonnet. Gone is the naturally aspirated 4.2-litre V8 of the old car, and in its place is a 2.9-litre twin-turbo V6. Great as that old engine was, and it really was a cracker, there’s no denying the old RS 5 was something of a mixed bag.

That V8 was the highlight in an otherwise frustrating package, an athlete’s heart in a bodybuilder’s frame, the RS 5 lacked the precision and enjoyment to take on its best German rivals. Fast, unquestionably, with incredible traction thanks to its quattro four-wheel drive, it was capable rather than captivating. And that’s something the new RS 5 aims to correct.

There’s less weight now, over 60kg, and the RS 5 still has four-wheel drive via its quattro system, though with some 31kg less weight under the bonnet there’s the promise greater agility. There’s a new conventional torque convertor automatic – replacing the V8’s twin-clutch set up and there’s an additional ratio in compensation, with, count them, eight now.

Audi promises that the shift’s as quick as that twin-clutch unit before it. There’s a Sport Differential as standard at the back too, helping the 40/60 front-to-rear drive split from the centre differential be put to the best use possible.

All that allows the RS 5 to be quicker, the 0-62mph time quoted at a class-leading 3.9 seconds, with the electronic speed nannies stopping the fun at 174mph – assuming the optional Dynamic Package has been added. Sharper, too, that increased pace coming with the promise of greater agility.

Enough then to take the fight back to those BMW M and Mercedes-AMG rivals, Audi says, even if it admits that the RS 5 is aiming for a broader suite of talents than the more singular approach of those two obvious competitors.

Forget for a moment what’s powering it and instead just look at the new RS 5. Few do simmering muscularity as well as Audi, the RS 5’s broad stance coming from Ur-Quattro evoking blistered arches. They’re filled by standard 19-inch rims, though we’d bet our house and yours that not one will be specified without the optional 20s.

The rest is all pretty familiar A5, only with added attitude. The honeycomb grille pouts confidently forward, topped by slim LED headlights, complemented by massive air intakes either side and underpinned by a jutting splitter.

The extrovert front is somewhat at odds with the subtler flanks, large wheels and blistered arches aside, as the small air vents with their RS 5 badging behind the front wheels are almost apologetic in comparison to the rest of the car’s visuals.

Nowhere is that more obvious than around the back. There a pair of Crossrail tunnel dimensioned exhaust finishers (the pipes nestled within them are not quite so wide) sitting either side at the rear. Between them nestles a sizeable diffuser, dwarfing the tiny lip boot spoiler that tops all that.

Getting in is never going to be a disappointment; a stock A5’s a visual treat, and the RS 5 enhancements only add to it. The focus, unsurprisingly, is on its sporting intent, so you’re hugged by deeper, firmer seats (Super Sports numbers for a £3,500 premium in our car) facing a flat-bottomed wheel behind which sits Audi’s Virtual Cockpit digital instrumentation.

There’s a smattering of RS badges and the RS 5’s cabin is a tactile treat and an operational delight, which comes with all Audi’s latest driver assistance, safety and connectivity.

That it’s fast comes as no surprise, Audi’s RS models do fast well. Quattro-enhanced traction means every bit of that engine’s power can be exploited, the 3.9-second 0-62mph time being a scant half second slower than its V10 R8 relation's. Neither of its rear-driven German rivals can touch that, and throw in some good old British weather into the mix and they’ll be downright embarrassed.

It’s all very easy too; in the old RS 5 you had to rev the hell out of it for the fireworks to happen, but here those two turbos work hard from low revs to give huge urgency more of the time. For all its pace though the linear response does mean there are no highs, just a torrent of power, which for the most part isn’t sullied by any turbocharger lag.

That means it’s quick, everywhere, the eight-speed auto swift in its shifting, though it remains disappointing that for a firm so wrapped up in tactility and material quality that the paddles that operate it are so small and cheap-feeling.

Get over that and use them to chase the redline and there’s some aural simulation, but even with the optional Sports Exhaust and some revs wound on you’ll be missing the sort of drama that an AMG C 63 delivers at idle, let alone part throttle.

Indeed, the civility of the Audi's package, while defining it as a car with a broader repertoire over its more focused competition, does rather make it feel like a slightly quicker S5 than a genuine rival to its sometimes unhinged competition.

There’s none of the teetering on the edge of something with the RS 5. Here it’s simply a case of throw it into a bend and it’ll grip and go. The traction it’s got is sensational, the way it can exploit it equally so. If that’s all sounding a bit RS Audi familiar then you’d be right, only here that assured, confident pace is at least underpinned with some genuine agility, and sometimes even a deftness of touch.

Optioned with the RS Sport Suspension with Dynamic Ride Control the RS 5’s ability to ride convincingly is a genuine surprise. It’s supple and controlled, which is to the enormous benefit of usability, even when riding on those optional 20-inch wheels.

Play around with the settings and there’s a corresponding change to the engine note and the suspension, though the firmer Sport setting does little but add unwanted frequency to the ride and some weight at the wheel. The steering itself is decently weighted, and while feel is at a premium it’s not short on accuracy.

Set it up right and there’s the hint that those differentials are doing their thing, pushing power to the rear axle, the lighter nose helping it turn in with more enthusiasm, too, but for all its gains it’s still an exercise in effective cross-country pace rather than grin-inducing indulgence.

That depends on what you’re after. If you’re a fan of fast Audis, then the RS 5 will blow your socks off. It’s sharper to drive, quicker too, and it looks sensational. More of the same, only better, though we can’t deny we’d love the dynamic changes it brings, married to the engagement of the old, rev-hungry V8 engine.

Progress denies us that. It’s impossible not to be impressed by the RS 5, as it's a genuine step forward for Audi and in many areas – particularly the ride comfort – a leap ahead.

The RS’s talents remain its surefootedness and effortless pace, but part of the joy of its rivals is the effort required, and the corresponding rewards, and in the RS 5, they’re fewer.