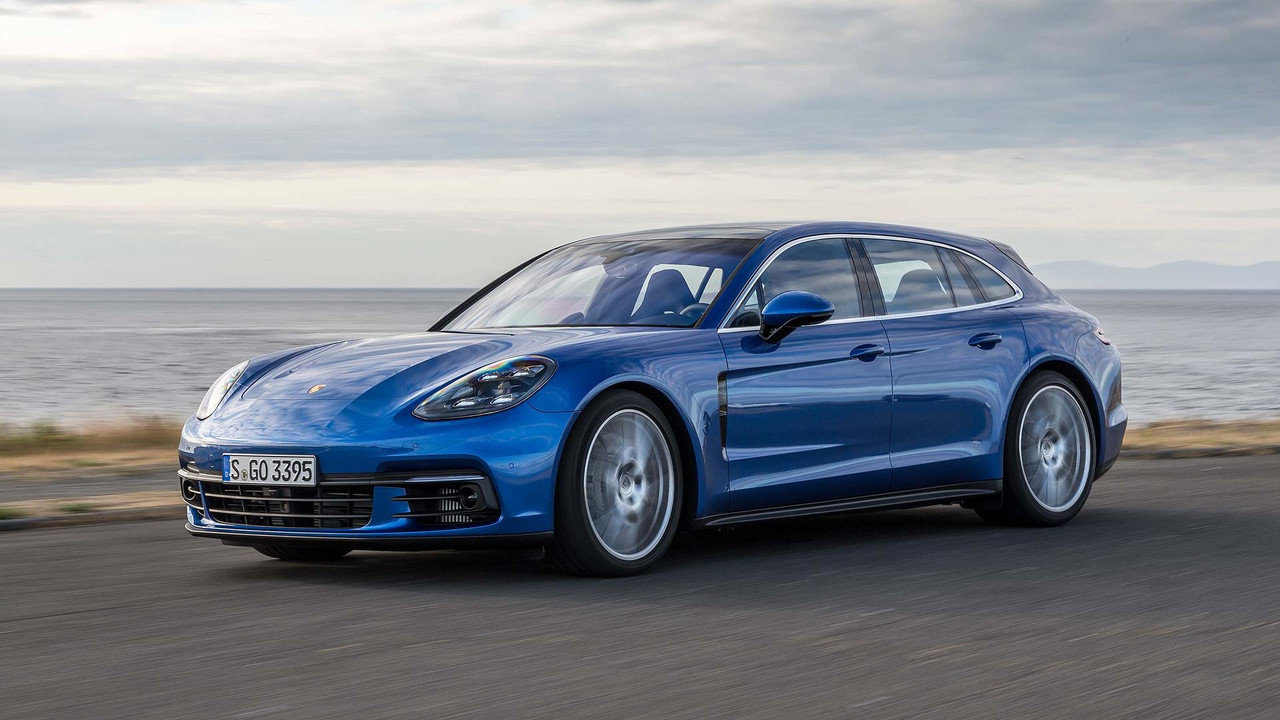 What do you do, if you want something that drives and looks like a sports car, but has the practicality of an estate? Has four-wheel drive but isn’t an SUV? Has a bonafide jealousy-inducing badge but just mightn’t be extortionately expensive to run?

Well, you’re in luck because Porsche has just created a car for your very specific requirements.

All have active, torque-shuffling all-wheel drive, all have an eight-speed dual-clutch PDK automatic ‘box, and all bar the entry-level V6 petrol have adaptive air suspension. The entry level car starts at just under £75k, but the 4S Diesel is an eye-watering £97k.

More shooting-brake than estate, the Sport Turismo’s initial appeal is obvious the moment you clap eyes on it. That striking rear end has a more purposeful stance than the slightly gloopy looks of the standard Panamera; it just all looks a bit more taut and muscular, and all-round lovely.

On top of that, there’s the practicality. On paper, at least, a 520-litre boot and capacity for five people makes it look set for heavy duty, all-occasions family motoring. But in reality it’s practical provided you only want to carry four people because that middle rear seat – which Porsche quite rightly describes as a ‘+1’ rather than a full seat – has no legroom at all because it’s taken up by a wide centre tunnel with air-con controls. It’s the sort of seat you’ll only be happy to be in if it’s for a very short lift home from the pub; even young kids will be less than enthused with it.

That boot, however, is pretty good for a style-led car. The load lip’s low, the rear seats fold 40/20/40 to leave a flat through-loading area, and the boot opening is big enough that you’ll be able to sling those golf clubs in with ease. It’s a fraction smaller than the boot in an Audi A7, but it’ll tick the boxes for anyone wanting a practical Porsche despite the fact that the sloping rear window makes it less ideal than a ‘proper’ estate.

The driving position is spot on. All Sport Turismos get electric seat adjustment, and it’s a supportive seat that sits low to the ground and that you can tweak about until it fits you perfectly. From there, it’s easy to enjoy the glossy 12.3-inch touchscreen, which looks really sharp and – while it isn’t always the most intuitive to use thanks to some slightly hidden sub-menus, and it’s odd that you have to control the central air vent through the screen – it is generally quite easy to hop between functions and control the major stuff. Nav and Apple CarPlay are standard.

It’s about the perfect balance of sports car and GT. Sure, it’s a heavy car and you’re conscious of that, but while it’s no sylph, it controls itself with the sort of brutal precision that makes its mass feel more like muscle than flab.

Swing it into a brisk corner and, even with the air suspension in its most forgiving mode, the car feels unrelentingly neat and poised as it grips and tucks its nose into the line you’ve chosen. There’s very little understeer, just a tidy willingness to do as you please.

That four-wheel drive is clever enough that it delivers a whiff of rear-wheel drive naughtiness; get it on the power early out of a tight corner and you feel it sling a load of the monumental torque levels to the rear wheels as it hunkers down and fires itself forwards.

And that V8 diesel is just brilliant, too. Sure, some people might find the burbling soundtrack it emits a bit odd, but it’s characterful, and nothing like the sort of aural dirge you get from a four-cylinder diesel.

It also makes this an astonishingly rapid car, not least because it has 627lb-ft of torque streaming right the way from 1,000-3,250rpm. Which is why it’ll do 0-62mph in 4.3sec, and more importantly is also why it has demonic mid-range urgency.

Sure, you won’t necessarily want to rev it to the redline, but you don’t need to because the PDK gearbox will have snicked its way perfectly through the appropriate ratios and allowed your estate-cum-supercar to breathe fire and damnation all over whatever other car dared to get in your way. And all while doing 35mpg in everyday use. Which is nice.

It’s comfortable, too, provided you stay out of the stiffest suspension mode, when it gets too firm over compressions; the softest setting is supple and still keeps the body from wallowing or leaning much at all, even in fast direction changes.

Even so, you’re going to want to add the Sport Chrono pack, which brings the variable driving mode switch on the wheel and the varying steering modes (Sport is best rather than Sport Plus), and you’re going to want to add the Sports Exhaust. And you may as well throw in the rear-wheel steering and torque vectoring. Great as it is, you’ll be spending money on extras for the Sport Turismo, no doubt.

Well, yes. It’s really expensive, and a bit hard to justify given that an Audi RS7 is cheaper and faster, and even a bit more practical. There’s no doubt that in purely objective terms there’s a big question mark here.

But it’s not a car you buy for purely objective reasons, being as much a lifestyle statement as a lifestyle necessity, and this is more fun than any A7, better looking inside and out, and in another stratosphere for the ‘want one’ factor. If you’ve got the money and the lifestyle, then do it. We certainly would.