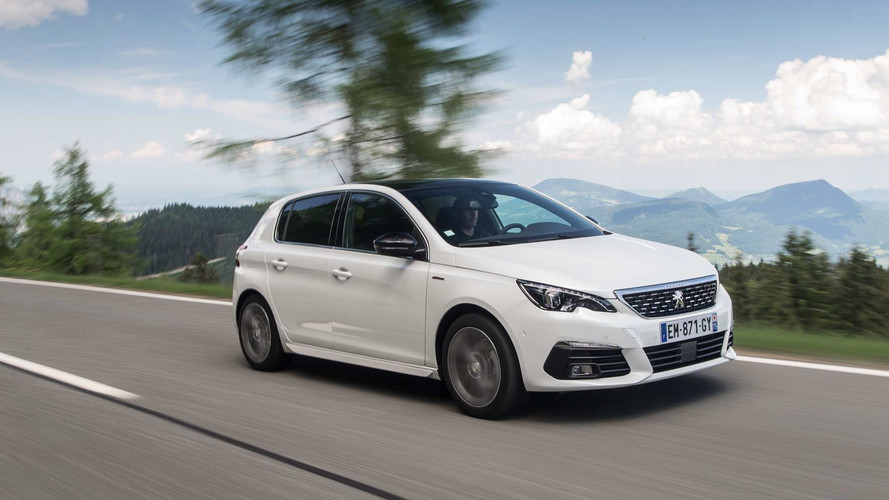 The Peugeot 308 is the French company's contestant in the popular C-segment hatchback market, a rival for the likes of the heavy hitters in the sector, such as the Ford Focus, Volkswagen Golf and Vauxhall Astra. The current generation has been on sale since late 2013 and underwent a makeover mid-2017 that added more technology and more efficient petrol and diesel engines. A fast GTi version tops the range and there's a 308 SW estate available too.

Did you know? The Peugeot 308 was awarded the 2014 European Car of the Year, seeing off competition from the BMW i3 and Tesla Model S among others.

The Peugeot 308 is stylish to look at in an unpretentious way and a refreshing change from the norm. That's especially the case on the inside, where the unusual dashboard layout strongly divides opinion. Sadly, that cabin is only average in terms of space, but it is at least well-equipped.

On the road, there's nothing special about the 308 (GTi version aside), either, though many of its engines are class-leading and the company's focus on real world fuel economy may appeal to cost-conscious buyers.

When the Peugeot 308 was first introduced in 2013, it was a hugely refreshing departure from its predecessor with high-tech LED lighting all-round, a 'three-claw' motif to the rear lights and an overall profile closer to that of the Golf than what went before.

It's still an attractive design and Peugeot enhanced its presence with a modest facelift in 2017 that introduced a more prominent radiator grille and new bonnet. That grille looks at its best from GT Line up where it gains a chequered appearance and red Peugeot lettering.

The 308 was the second model from Peugeot (after the 2008 crossover) to adopt the company's controversial 'i-Cockpit' layout inside, and other than a few tweaks to the central touchscreen it was unchanged in the 2017 update.

Theoretically it's a great idea, as the main instruments are raised up and moved closer to the driver's line of sight out the front window. However, to achieve this, the steering wheel is oddly small and some drivers have to sit higher up than they might want to, to ensure they can see all of the read-outs.

Nonetheless, there's no denying the high quality finish inside the 308 – if feels up to Golf levels for the most part, with solid surfaces and decent materials.

In terms of boot space, the 308 is one of the class leaders, holding 470 litres with all seats in place or 1,309 litres with the split rear seat back folded down. However, space for passengers sat in the back seats isn't particularly generous.

A rear armrest with ski flap and two cup holders is standard in all trim levels other than the entry-level Active. Storage around the cabin is plentiful for odds and ends.

This generation Peugeot 308 was always pretty up to date in terms of technology and connectivity, but it took a significant step forward as part of the 2017 updates. The centrally mounted touchscreen was upgraded too, so it's quicker responding than the pre-2017 version and it houses lots of new features.

All models, as you'd hope these days, come with DAB radio, Bluetooth telephony, and a USB socket, plus audio controls on the steering wheel, and there's also Mirror Screen, which bundles together Mirrorlink, Apple CarPlay, and Android Auto to allow you hook up and use many of your smartphone apps through the car's display.

An additional standard feature is 3D Connected Navigation, which features a three-year subscription to TomTom Live updates. There's voice activation of the stereo, satnav, and Bluetooth system, too.

Further up the range is an impressively clear colour rear-view camera system, to complement the standard rear parking sensors, while audiophiles can upgrade to a 500W Denon audio system, featuring a 100W subwoofer.

On the road, the 308 is refined and comfortable and a good all-rounder. GTi version aside, it is not really a car that driving enthusiasts will get excited about, but it's certainly competent.

The small steering wheel initially makes the 308 feel wieldy and agile, but more time spent with the car reveals that there's precious little feedback through the steering system and the front end can wash wide easily if you drive it a little too enthusiastically through a series of challenging corners.

Likewise, the suspension struggles to contain unwanted body movements if there's a significant bump in the middle of a corner, which reduces your confidence in the car's abilities.

Nonetheless, the engines, for the most part, are excellent. The range-topping 2.0-litre diesel has loads of performance, but as it's also quite a loud unit, we'd argue that most drivers would be better off with the smaller diesel options – unless you do a lot of towing or you want the newer eight-speed automatic transmission (as that's exclusively available with the 180hp 2.0-litre engine, for now).

The 1.6-litre diesel has been a big seller in the 308, but it's set to be phased out and replaced by a new 1.5-litre diesel engine. In 130hp trim this is a really good powerplant, mixing perfectly adequate performance with smooth driving characteristics and notable refinement at all times. For now, it's available solely with a slick six-speed manual gearbox, but we'd expect an automatic option in time.

Recommended engine: 1.5 BlueHDi 130 [*NOTE: full details of this engine not yet available]

A great result by any standards, and Peugeot enhanced its offering during the 2017 update with plentiful new high-tech driver assistance systems, though they're not standard across the range. What is standard is anti-lock brakes with Electronic Braking Distribution and Emergency Braking Assistance, a host of airbags, stability control, tyre pressure sensors, and two ISOFIX child seat mountings in the back. Peugeot Connect SOS and Assistance is standard from GT Line models up.

Safety Plus adds Automatic Emergency Braking and it can be further extended with Adaptive Cruise Control or with the City Park option, which is packaged together with Active Blind Spot Detection. Some of these packs cost in excess of £1,000, which means many buyers are likely to not bother. It's a shame Peugeot couldn't make them more affordable.

Finally, if you're a 308 GTi buyer that's not afraid of a bit of attention, you can opt for one of two dramatic two-tone finishes, mixing either Magnetic Blue or Ultimate Red with Nera Black.

The entry-level 308 is called the Active and it's comprehensively well-equipped by any measure, coming as standard with dual-zone climate control, 16-inch alloy wheels, rear parking sensors, satnav, voice recognition, Mirror Screen for your smartphone, and auto lights and wipers.

Next up is the 308 Allure, adding front parking sensors, power folding door mirrors, sports seats, significant detail upgrades inside, a panoramic glass roof, and 17-inch alloy wheels on most variants.

Then there are three GT-themed trim lines, topped by the standalone GTi hot hatch. The GT Line specification is available in conjunction with almost all of the engine options and comes with full LED headlights, LED fog lights and scrolling LED indicators, tinted rear side and tailgate glass, a colour reversing camera, 18-inch alloy wheels, a sportier overall exterior look than Allure, and a considerable upgrade inside as well, with lots of black and contrasting red highlights, including sports seats in part 'leather effect' trim.

Above that sits the 308 GT, powered by a choice of just two powertrains. Its interior and exterior are further enhanced, the highlights including Alcantara and leather effect upholstery and keyless entry and start.

The 308 is a little smaller overall than the Vauxhall Astra and Ford Focus, but about the same size as a Volkswagen Golf. In reality, its dimensions are average for the C-segment so there will be no surprises for buyers moving to it from other cars in terms of parking, etc.

Much has been said about the official fuel economy test procedures used by all the car makers, in particular that more and more cars return figures in the real world that are further and further away from their official ratings. That is set to change with new legislation and Peugeot is seizing the opportunity to lead the charge.

Its range of petrol and diesel engines in the 308 were commendably economical from the start, but a renewed focus on efficiency for the 2017 update means even lower running costs for owners. The entry-level 1.2-litre turbo petrol engine, for example, returns over 70mpg, while the newest engine, a 1.5-litre diesel, should top 80mpg.

Even the powerful 2.0-litre diesel unit found in the 308 GT, fitted with the company's newest eight-speed automatic transmission, manages 70mpg. It's fair to say that fuel economy is one of the reasons you'll buy a Peugeot 308.

The 308 is still a relatively new car, with many still under warranty, so there isn't a lot of information about reliability available as yet. Nonetheless, buyers report that they're very happy with its quality and reliability in general. There have been isolated incidents of minor electrical gremlins, but no more than any other model in the segment.

The Peugeot 308 comes with a three-year, unlimited mileage warranty and Peugeot Assistance, provided by the AA. Peugeot offers three service plans for three years/35,000 miles, four years/45,000 miles, and five years/55,000 miles, starting at £12.99 a month. The 308 has an on-board service indicator to let owners know when it is due, but once a year or every 15,000 miles is a good guide.

Pricing for the Peugeot 308 is very competitive, especially when you look at what you get for the money. There are no headline-grabbing low-priced models propping up the range, so the entry-level Active price is about £19,500 when powered by the 110hp 1.2-litre petrol engine.

The current starting point to the diesel range, the older 1.6-litre engine, is about a thousand pounds more. Price walks between trim levels are £1,300 from Active to Allure and £1,800 from Allure to GT Line, though note that not all engines are available with all trims. 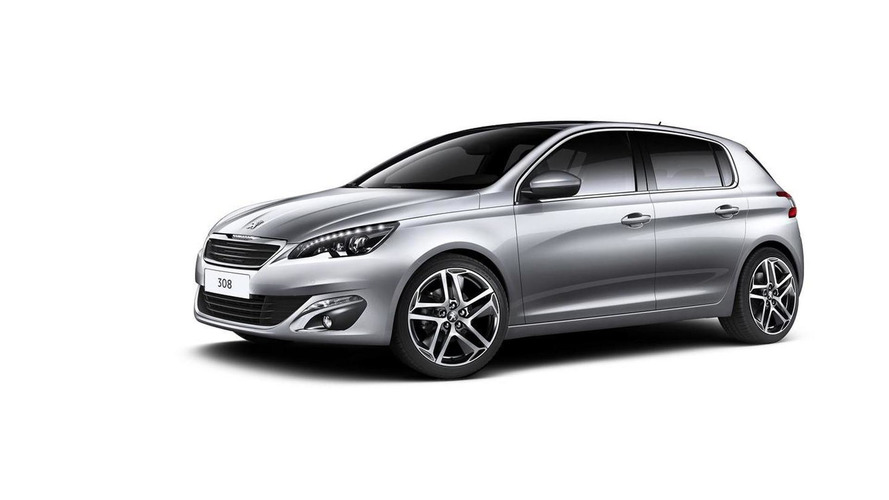