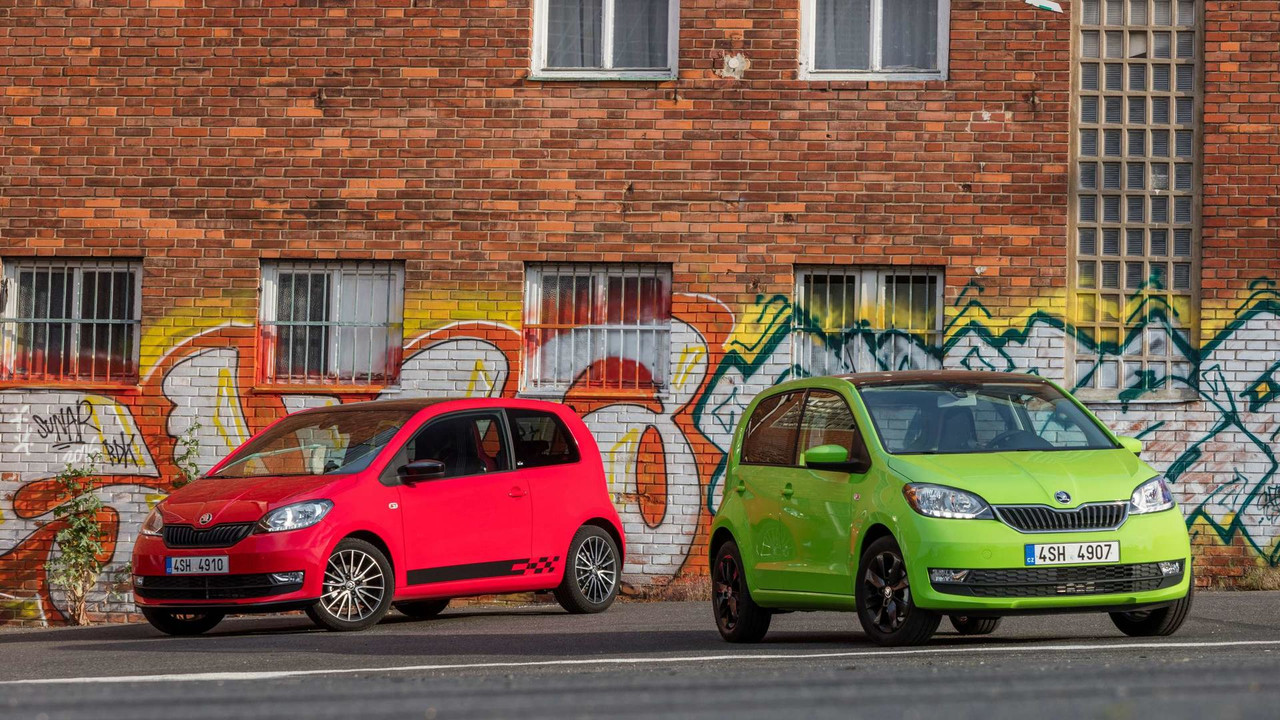 The Skoda Citigo is held in high regard in the city car segment where there is little to differentiate the competition. Even among its near-identical siblings, the Seat Mii and Volkswagen Up, the Citigo strikes the right balance of value and style. This 2017 facelifted version is just that in the strictest sense, with only minor visual changes compared to when it was first launched in 2012, and no mechanical differences. Its infotainment system lets you integrate your smartphone as part of its display and there are many elements to Skoda’s repertoire of practical features throughout the cabin. Existing Citigo owners are unlikely to feel any urgent need to rush out and upgrade, but without any new engines or increases in performance, has Skoda done enough to entice new buyers when so little has been updated?

Did you know? The Skoda Citigo’s automatic transmission, at 27kg, is one of the lightest gearboxes ever built.

The Skoda Citigo might not have come in for any mechanical changes since its initial introduction in 2012, but it remains one of the best all-round city cars on sale. While it majors on functionality, it still has enough in the style stakes to give it mass appeal. It might not be quite as lavishly finished inside as some versions of the Volkswagen Up, but it does have a more affordable price tag.

As both of the Citigo’s engines are closely matched, the choice is more about how many doors and what trim level of equipment you want inside. Move up the range and the interior quality beats rivals like the Citroen C1/Peugeot 108/Toyota Aygo trio and others such as the Suzuki Celerio.

Skoda did make some minor styling updates to the Citigo as part of its 2017 model year update, but little has changed since its launch in 2012.

The new bumper designs added to the car’s length by 34mm, but at 3,597mm overall (and 1,645mm wide) it is still a car that will easily fit into the tightest of parking spaces. The headlights feature integrated LED daytime running lights as standard on all but ’S’ grade models and there’s a grille that closely resembles that of the Kodiaq and Octavia, while the bonnet has a sculpted appearance that matches the grille’s profile.

Depending on grade, wheel sizes range from 14- to 15 inches with the option of 16-inch rims. As they are pushed right into the corners of the car to maximise interior space, wheel size has less of an impact on the overall look than it does in some.

It may be one of the boxier designs in the segment but the Citigo remains a stylish car, and the choice of bright and vibrant exterior colours adds to this. Some will like the three-door’s clean look but the increased practicality of the five-door, especially with its shorter front doors, makes it a better choice.

The Citigo’s cabin is a simple affair, but it isn’t what some would call utilitarian, even with the painted metalwork exposed on the tops of the doors. In fact, if you’ve chosen a brighter paint then this helps inject a bit more colour into the interior. A plastic dashboard facia breaks up the design and lifts the sense of quality, too.

Considering its compact dimensions, the Skoda is reasonably spacious, meaning you won’t be banging elbows very often with your front seat passenger.

Optionally, the steering wheel can be enhanced with controls for the stereo and phone calls, but the wheel feels a little too large in diameter for a car of this size, and it is only adjustable for height, not reach.

However, the instrument display is simple and clear to read at a glance, but, depending on the position of the wheel, the top of the speedometer does tend to get cut off from view.

A trip computer screen is also available as an option on SE L and Monte Carlo models.

All bar the entry-level S models get the Swing radio system that features a colour display and can be connected to a smartphone via a dash-top cradle. This replaces the previous docking station that featured the satellite navigation.

The net result is largely the same as before, but you will need to wrap the USB cable around the back if you want a less cluttered look and plan on charging your phone at the same time.

For its size, the Citigo has a fair amount of storage areas dotted throughout the cabin. The door bins are wide enough to carry small bottles and the centre console has a good-sized cup holder up front and another between the seats just behind the handbrake.

Skoda is a company known for coming up with ingenious solutions, and the Citigo has plenty of them. The glovebox, which is well-sized, has a pop out hook on its latch that can be used to hold a handbag, shopping bag, man bag, etc.

Skoda has added an umbrella to the underneath of the front passenger seat, too, which is handy if you get caught out in the rain. In the front, you also get a 12-volt power socket and a USB port.

Rear passenger space is good, but if you plan on frequently carrying more than one person in the car it’s worth considering the five-door model.

Luggage space measures at 251 litres, and while it’s not the largest of boots, it is at least deep. The 60:40 split rear seats can be tumbled forward to create a total of 951 litres in the three-door or 959 litres in the five-door.

For all but the entry S versions, Skoda has equipped the Citigo with its Swing radio system. It features an aux-in socket, SD card slot, and a USB port that can be used to connect with a smartphone. You can place your device into a cradle on top of the dashboard, and if you download Skoda’s Move&Fun app, you can view additional driving data. A DAB radio can be added as an optional extra.

When it comes to urban driving, the Skoda sits at the better end of the quality spectrum, behaving itself on poor surfaces and demonstrating a solidly-built feel when you do hit bumps. It does lack the fun element, in part due to the lacklustre engine.

Its cousin, the Volkswagen Up, for example, has a keen 90hp TSI petrol engine option. However, Skoda has no plans to introduce this to its Citigo range. What you do get is the choice of two versions of a 1.0-litre naturally aspirated three-cylinder petrol unit.

Producing 60- and 75hp, the latter is available only in the higher SE L specification. Both engines are more closely matched than you might think. This is primarily due to the 60hp reaching its peak power output 1,200rpm earlier than the 75hp engine.

Both produce the same amount of torque, 70lb-ft at 3,000rpm, so there’s enough low-down shove for town driving. It is out of town on more open roads, and motorways in particular, where the 75hp engine’s higher output is welcome.

The engines have a typical three-cylinder thrum, but it isn’t overbearing. Road noise too, considering the lightweight nature of the car, is kept to a minimum, and the ride quality is generally good.

The optional 16-inch wheels may look more stylish, but the extra tyre sidewall provided by the 15-inch wheels does add that extra bit of cushioning over fractured town tarmac and speed humps. It is at home in traffic and the light steering matched with well to the smooth five-speed manual gearbox.

You can hustle the Citigo along at a decent pace and its handling, although not pin-sharp, leaves little cause for complaint.

Less impressive is the automatic transmission. Its sluggish gear change becomes more prominent when driven faster with its kick-down sometimes seems more severe as it drops several cogs to hit the powerband. Even in the more powerful 75hp version it leaves the Citigo feeling ponderous in the performance department.

If you plan on mainly sticking to town driving then the 60hp engine will perform ideally in almost every scenario, and its official economy figure of 64.2mpg shouldn’t affect the family budget too drastically.

Skoda also offers a GreenTech version of the engine with a slightly better 68.9mpg thanks to a stop-start and brake energy recovery system, as well as lowered suspension to improve aerodynamics.

All Skoda Citigos come with four airbags and two ISOFIX points in the rear. On the driver assistance front, the standard equipment includes Hill-Hold Assist and tyre pressure monitoring.

As an option on models from SE upwards, buyers can add Skoda’s City Safe Drive, an automatic braking system that mitigates against potential front impacts between 3- and 18mph. This also includes a rain and light sensor.

Cruise control is also available to order as an option on SE L and Monte Carlo models.

A total of eight exterior colours is available on the Citigo, four of which are metallic and pearl effect. The standard colour is Tornado Red, with Candy White available for £160, and Sunflower Yellow and Kiwi Green costing £520 extra.

The Monte Carlo model comes in Tornado Red as standard, with Candy White and Deep Black Pearlescent available at an additional charge. That version also wears model specific decals along the bottom of the doors, base of the boot lid, and has an all black grille.

In total, there are four trim levels to choose from in the Citigo range including the Monte Carlo version. It starts with the Citigo S that is very much an entry-level car. It rides on 14-inch steel wheels, has halogen headlights with daytime running lights, and the more basic Blues radio system, but lacks Bluetooth.

Moving up to the SE spec, you gain the Swing radio with Bluetooth and the smartphone holder. Headlights get LED daytime running lights and the rear seats can be split 60:40. Wheels remain 14 inches in diameter, but are the Apus alloy design. Manual air conditioning and a height adjustable driver’s seat are also included.

Getting a sportier look is the Monte Carlo variant, which has black 15-inch alloy wheels, lowered suspension, an exterior sticker pack on the boot lid and doors, darkened rear lights, and rear privacy glass. Inside, there is unique black and red upholstery, with further red flashes on the centre console.

Like most other city cars, the Citigo is quite compact, measuring in at just 3,597 millimetres in length and just 1,910mm in width. It has a reasonably tight 9.8-metre turning circle for added manoeuvrability. The five-door is more practical, although both body styles have the same exterior dimensions and wheelbase of 2,420mm.

With a 35-litre fuel tank, kerb weight of between 857 and 865kg and up to 68.9mpg fuel economy, the Citigo shouldn’t cost a fortune to run. GreenTech versions have emissions of 96g/km and so cost £120 to tax in the first year, while all other versions cost £140.

Skoda operates a fixed or flexible service regime based on how many miles you drive per year. If you don’t cover that much, the fixed service plan requires a garage visit every 10,000 miles or once a year (whichever comes first).

If you tend to cover more miles, the flexible regime is recommended and this uses a sensor in the engine to detect when a service is due and can indicate by a dashboard message that will show between 9,000- and 20,000 miles - or up to 24 months. This is aimed at drivers covering more than 25 miles per day with more constant speed driving.

Skoda prices the Citigo from £8,635 on-the-road for the 60hp three-door in S specification. The SE upgrade costs a further £1,000 based on the same engine, with the automatic transmission adding a £350 premium to the price.

If you want the 75hp engine you will need to choose a Citigo in the SE L grade, which will cost £10,915. The sportier-looking Monte Carlo model only has the 60hp engine and is priced from £11,170.