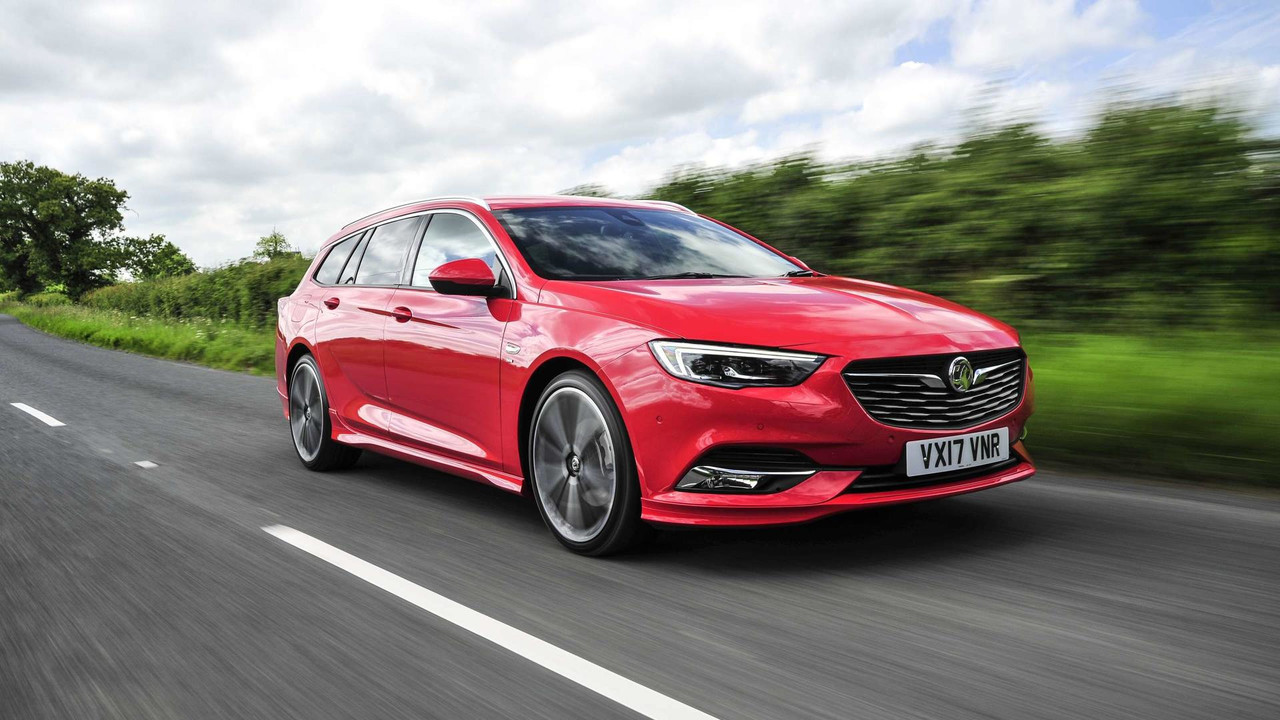 More space than ever for Vauxhall's big load-lugger.

Vauxhall admits it focused on style over substance for the Insignia Sports Tourer in its previous incarnation and in this car it has addressed that. So there’s more space than ever, for both passengers and luggage – the Insignia offering space to rival cars in the premium class above. That boost in practicality hasn’t come at the expense of good looks either, this estate Sports Tourer version of Vauxhall’s Insignia retaining sharp, distinctive lines. Add good value to those good looks as well as plentiful standard equipment and a decent drive and the Insignia Sports Tourer isn’t just a useful choice in the estate car market, but also a desirable one.

Did you know? That clichéd ‘carpet sample’ image of the mainstream estate car is actually justified here as the Vauxhall Insignia Sports Tourer was designed specifically to fit them – something the old car couldn’t manage.

Big, comfortable and capable: that’s all you could really ask for from a practical load-lugging estate car. Only Vauxhall has gone a bit further with the Insignia Sports Tourer, adding a massive standard specification across the line-up with sensible pricing, too. It's fine rather than exiting to drive, but that’s no complaint, as the Insignia Sports Tourer is an easy, effortless place to spend a lot of time in - as many owners will. Then there’s the design, which, thanks not just to sharp lines, but also the fact it's not one of the omnipresent models in the premium sector above it, makes it really stand out in this busy marketplace. For all its style though it has not forgotten its purpose, which is carrying stuff. Which is where that big, easily accessed boot and useful stowage solutions help out. Sensible then, but not at the expense of genuine appeal, the Sports Tourer is well worth a look if you need a practical family car.

Combining space maximising practicality and sleek styling creates difficult packaging challenges, but Vauxhall’s designers have managed to develop a cohesive, neat look for the Sports Tourer, which doesn’t result in any real compromises. Visually, the length of the roof helps, the chrome finisher that runs the length of it and down to the taillights tricks your eye into thinking the Sports Tourer’s lower than it actually is. If we’re being picky, the execution of the termination of that chrome detail line in the rear lights is a bit clumsy, but it’s a small complaint in an otherwise smart overall design. The Insignia’s transformation from svelte five-door hatchback into a more practical load-lugger, then, is a very convincing one indeed.

The Insignia Sports Tourer is lengthier than many cars in the premium segment above - 40mm longer than an Audi A6 Avant, for example - which is not just to the benefit of space inside, but also its presence on the road.

The people at Vauxhall will tell you that the Insignia is as classy as an Audi inside. It’s not; indeed, the interior is not even a match for mainstream rival, Volkswagen. It’s not as far off as it once was, though and, really, few will find any cause for complaint. There are some hard and scratchy plastics if you look for them, but they’re mostly located in lower areas around the interior and out of sight. The design of the dashboard isn’t in any way revelatory, but then that’s to the clear benefit of functionality, while the cabin’s controls are all easy to use and understand. There’s an eight-inch colour touchscreen in all but the Design models (these get a smaller seven-inch item) and the conventional instruments ahead are supplemented by a central, configurable digital display.

The seats offer good comfort (SRi models get more deeply bolstered sports seats) and the space in any is good, though the middle rear pew suffers from being raised and narrow - best consider that for occasional use, then. Refinement is good, the engines all nicely hushed, though there’s a bit of road noise on rougher surfaces, which is exacerbated by larger alloy wheel choices.

This is the Insignia Sports Tourer’s reason for being, and Vauxhall admits it has concentrated heavily on its load-carrying ability after focusing more on ‘lifestyle’ with its predecessor. The load compartment is notably larger now, growing by more than 135 litres over the car it replaces, for 560 litres with the seats up, or 1,665 litres with them folded. The increase in space was important, as Vauxhall’s product planners say it lost significant fleet sales of the old car due to its inability to fit a standard-sized dog cage and even carpet samples (yes, really) so it has worked to address those.

The result is a longer, higher, more capacious boot, that’s got significantly easier access via a bigger opening. The boot door can be opened with a foot swipe optionally, while the (again optional) FlexFold 40/20/40 split-fold rear seats drop flat quickly and easily at the push of a button, whereas the standard rear seats offer a 60/40 split. There’s a FlexOrganiser Pack offered optionally too that adds tie-downs, side rails, nets, and fasteners for the ultimate in load management, whether it’s dog cages, carpet samples or anything else… Do option the powered tailgate if it’s not standard, though.

This segment is defined by equipment levels and P11D pricing for fleet and business users. Little surprise then that even from the entry-level Design trim the technology offering is comprehensive. There’s Vauxhall’s seven speaker IntelliLink audio system with DAB, a seven-inch colour touchscreen, Bluetooth audio and telephone connection, Apple CarPlay, Android Auto, and USB connection.

All Insignia Sports Tourers also come with OnStar, featuring 4G/LTE WIFI that allows connection for as many as seven devices, as well as services like vehicle diagnostics and destination download. Choose the optional subscription for OnStar’s Personal Assistant and it can also make you hotel reservations or assist in finding parking.

Design Nav, as its name suggests, adds a fully integrated European satnav system, which gains a larger eight-inch touchscreen. That system is standard from Tech Line Nav upwards, as is a 4.2-inch colour information display in the instrument binnacle. Elite Nav adds Bose premium audio, which is offered optionally elsewhere in the range. Other key options include wireless phone charging and a head-up display, the latter available so cheaply (under £300) we cannot see why you wouldn’t have it.

The engine line-up covers 1.5- to 2.0 litres in capacity and all are turbocharged. The line-up encompasses three petrol choices of 140hp, 165hp, and 260hp, as well as the pick of three turbodiesels including a 110hp 1.6-litre unit as an entry point, a 136hp version of the same engine, and a 2.0-litre diesel with 170hp. Both the higher power diesels can be had optionally with an automatic transmission, while the flagship petrol comes with an automatic as standard, as well as four-wheel drive. A higher power 210hp 2.0-litre turbodiesel joins the line-up late summer 2017.

That flagship petrol’s four-wheel-drive system uses the same hardware as the Ford Focus RS, but there’s no ‘drift’ button here. Indeed, even in its fastest guise, the Insignia Sports Tourer’s strengths are centred around competence rather than engagement and excitement, which, given its audience, is no real surprise. Nor is it a complaint. There’s the offer of FlexRide with three different driving modes (standard only on the 240hp 4x4 auto petrol model), though it’s an unnecessary expense, as choosing Sport just adds weight to the controls and upsets the ride quality. The standard chassis rides decently enough, smothering bumps better with the smaller alloy wheel choices; similarly, road noise is a bit better suppressed with smaller wheels.

There’s good grip with all, the steering is light but accurate, likewise the manual gearbox, all helping the Insignia Sports Tourer be an easy, rounded, capable drive that’ll swallow up tedious motorway miles as well as it does big loads. There’s some driver assistance via Vauxhall’s standard fitment of 'Driver Assist Pack One' across all trim levels - it includes frontal collision alert, following distance warning, and a lane keep assist function.

The 2.0-litre engines are, obviously, the quickest, the petrol 240hp covering the 0-60mph dash in 7.1 seconds and the 210hp turbodiesel in 8.4 seconds. The 170hp turbodiesel takes 8.6 seconds, with the lower power 136hp diesel adding a second and a half to that. The petrol models are a bit quicker than their diesel counterparts here, too, though the mid-range performance from the diesel suits the car better. Indeed, the 136hp 1.6-litre turbodiesel feels like all the engine you could want, with good all-round performance mixed with impressive economy and emissions. A Ford Mondeo or Mazda6 might be marginally sharper on the road to drive, but the Vauxhall remains an appealing all-round package.

Core trims include Design, Design Nav, SRI, SRI Nav, Tech Line Nav, SRI VX-Line Nav, and Elite Nav. The fitment of satnav is unambiguously referenced in the trim names. All come very well specified, including DAB, air conditioning (dual-zone climate control from SRi up), and plentiful connectivity options. Tech Line Nav perhaps is the sweetest spot in the line-up regarding price and equipment. SRi models gain sportier looks outside and sports seats inside, while Elite Nav comes fully-loaded with Bose premium audio, leather upholstery, heated seats, and IntelliLux LED headlights. Options are plentiful, and reasonably priced: the FlexOrganiser for the boot is just £120, Wireless charging is £160, and a head-up display a bargain at just £290. Vauxhall offers various Winter and Driver Assistance packs for comfort and ease, though even as standard, in entry-level Design form, you’ll find yourself not missing any essential tech or equipment - navigation withstanding.

The Insignia Sports Tourer competes in a marketplace where low running costs are absolutely crucial, so it should prove to be highly competitive. Certainly fuel economy and emissions can match its rivals', the 1.6 D EcoTec the star in that regard, but the lower power petrol engines run it close on emissions. Where the Insignia Sports Tourer will struggle against premium rivals is residual values, as the Vauxhall badge is not as strong in the used marketplace as those German marques', or even something like a Skoda Superb, though you’ll admittedly have paid less in the first place, and done so with a far higher standard level of equipment.

With an eye on providing customers good value, servicing will be inexpensive, Vauxhall offering packages to pay up front, while reliability should be up there with mainstream rivals'.

Pricing starts at under £19,000, which is a lot of car for the money. Even so, spend a bit more on one of the more desirable specifications, like Tech Line Nav, for a huge standard equipment list or SRi Nav if you want sportier looks added to that. We’d suggest either trim with the 1.6-litre turbodiesel in 136hp guise, the Insignia Sports Tourer making less sense the more money you spend on it. The good thing is though, you really don’t need to, it’s at its best, to drive, to buy and own in the middle-ground, so in the £20,000-£24,000 sphere.