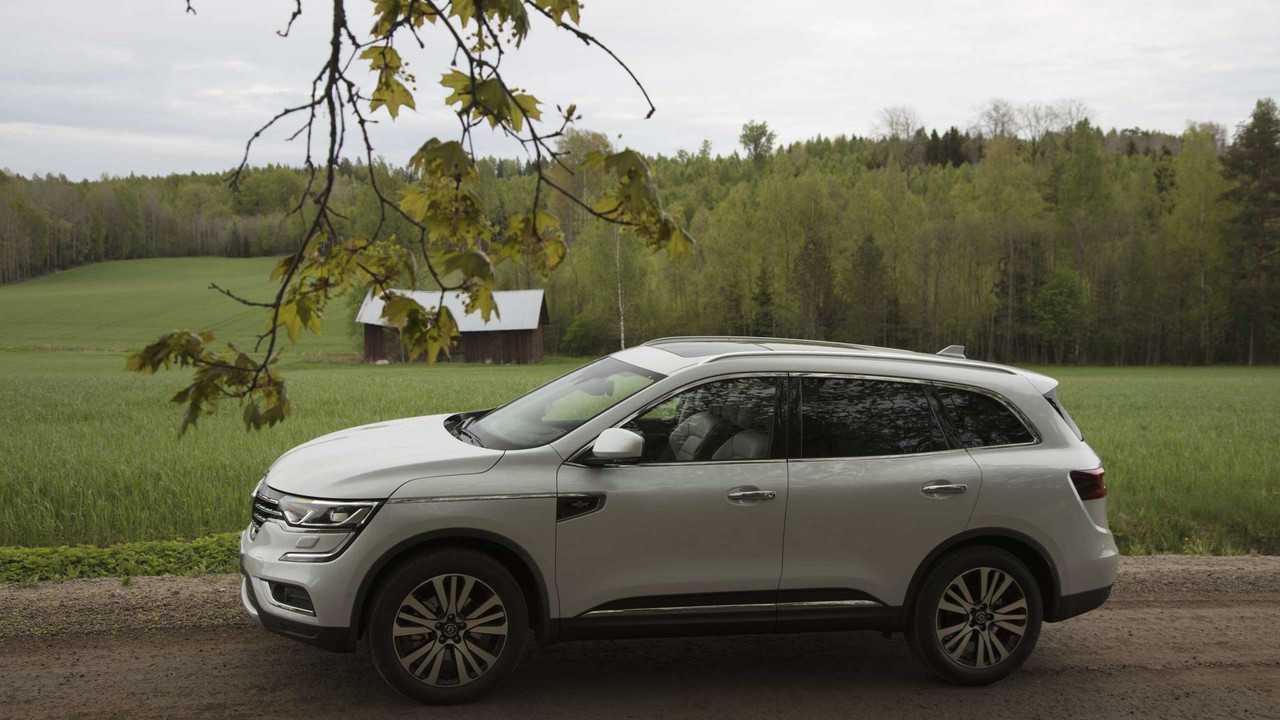 The Renault Koleos is the crown of Renault's SUV range, and one of its better cars.

The Koleos crowns Renault’s SUV range, sitting above the Captur and Kadjar. It looks every bit the range-topper, too, with a purposeful stance and an appealingly chunky design. Renault has resisted the trend among cars in this category to offer seven seats, sticking with just five and placing emphasis on comfort and space instead. Just two engines are on offer, both diesel, along with the choice of automatic or manual gearboxes, the former also being available with all-wheel drive.

Did you know? The Renault Koleos is sold in five continents.

This Renault Koleos has a more substantial feel than its slightly smaller sibling, the Kadjar. While many may see the lack of a seven-seat option as a potential missed opportunity, Renault does deserve credit for sticking to its guns and placing a greater importance on interior comfort. It ticks a lot of the right SUV boxes, including the increasingly important one marked 'kerbside appeal'.

Good levels of standard equipment are supplied and Renault only offers its two higher trim levels along with competitive pricing, which sees it undercut many rivals such as the Ford Edge and Hyundai Santa Fe, even if the Skoda Kodiaq and Peugeot 5008 give it a run for its money on the value front. It's all positive news for buyers. Automatic versions also feature all-wheel drive, which should go down well with those who need to tow or go off-road.

Proportionally, the Koleos looks just right for a large SUV, with enough curves to give it appeal without losing presence. Flashes of chrome across the door handles and on the strip running along the front wings and into the doors lift the car, too. The front-end styling has the family look that it shares with the Renault Megane range and is dominated by distinctive C-shaped LED daytime running lights.

It gets 18-inch two-tone alloy wheels as standard, with Signature Nav models gaining an upgrade to 19-inch wheels. A total choice of eight exterior colours is available. At 4,673mm in length, it is shorter than some of its rivals, but its generous wheelbase of 2,705mm and 1,843mm width benefits the interior passenger space. Smart touches such as doors that cover the full length of the sill, thus preventing any road dirt from getting onto your legs when getting in and out, add up to make this a well thought out SUV.

Inside, the upright dashboard is squared off around the front occupants and features chunky grab handles on either side of the centre console. The 8.4-inch portrait-style screen in the upper Signature Nav model looks better than in other Renaults now that it has received a gloss finish to its bezel, and is less prone to looking grubby after a few days of use.

However, the standard 7-inch infotainment system won’t leave you feeling disappointed and it has the benefit of more physical controls for the other systems in the car. The front seats are comfortable and quite supportive, offering plenty of adjustability. It’s a similar story in the rear, with the two outer seats being just as comfortable and there are good amounts of head- and legroom. Even the middle seat doesn’t have an intrusive transmission tunnel impinging on legroom.

The quality of the materials throughout the cabin mark an improvement over Renault’s usual standard. Upmarket options include a heated steering wheel, heated and ventilated front seats and front cup holders that can keep your beverage either heated or cooled.

As you may be able to tell, space is the recurring theme of the Koleos. Its boot is roomy and can swallow up to 579 litres of cargo, and folding the 60/40 split rear seats boosts carrying capacity to 1,795 litres. The load height is a touch on the high side, but the boot floor is level with it. Renault offers a powered tailgate on ‘Signature Nav’ versions and this can also be opened by waving your foot beneath the rear bumper should you have your hands full.

Around the rest of the cabin, there is a total of 35 litres of additional storage, including a seven-litre cubbyhole under the central armrest. Just two ISOFIX points are fitted to the rear. Two USB charging ports and a 12-volt socket are conveniently located on the rear of the centre console for passengers in the back and up front there is another 12-volt socket with two more USB ports and an SD card slot in the centre console.

Dynamique S Nav versions of the Koleos feature Renault’s 7-inch R-LINK 2 touchscreen system. This incorporates easy-to-use satellite navigation and Bluetooth connectivity in addition to Apple CarPlay and Android Auto. An additional 7-inch screen is in the centre of the instrument cluster and can show all relevant driving data in an easy-to-read display. Higher grade Signature Nav versions of the Koleos gain a larger 8.4-inch portrait touchscreen display that features full smartphone connectivity and mirroring in addition to 3D rendering of maps within the satellite navigation.

Renault will offer just two choices of engine in the Koleos: a 128bhp 1.6-litre and 175bhp 2.0-litre diesels. The more powerful of the two is also the only engine to offer the choice of an automatic transmission, and this includes Renault’s X-Tronic all-wheel-drive system. The 280lb-ft of torque this engine produces is well suited to the automatic transmission, which slips through gears efficiently to keep within that spread of torque lower down the rev range.

Should you want to do some light off-roading, Renault’s X-Tronic system is capable enough, and the Koleos has sufficient ground clearance at 210mm to keep most out of trouble.

For the majority of the time, the Koleos seems quite refined and gives a solid impression on the move. Its suspension soaks up plenty of surface imperfections, yet isn’t overly firm, and this carries across to the body control where there isn’t much lean in the corners. The steering is the one area that leaves room for improvement. It is slow to turn, resulting in the Renault seeming ponderous through a series of bends.

This dullness to the steering isn’t as evident in the smaller engined Koleos, which may be helped in part by less mass over the front axle. Although the 1.6-litre diesel concedes 47hp and 44lb-ft, it doesn’t feel that much slower on the road. Its steering is certainly crisper, and the six-speed manual’s gear change is positive.

It is the more economical of the two engines as well, with Renault quoting a combined economy figure of 61.4mpg, compared to the 2.0-litre’s 48.7mpg. Its 11.4-second dash to 62mph isn’t all that important to the target audience, but what is more relevant is the engine’s elasticity and roll-on performance at speed, which is more closely matched to the larger engine than you might expect.

Impressive refinement is common to both models. The engine bay, in particular, is well insulated to minimise any diesel din, even when cold. Only certain stretches of less well-paved roads throw up more noticeable tyre noise, but considering the Koleos runs on 18- and 19-inch tyres the roar isn’t as bad in the cabin as in some SUVs.

The Koleos range gets an even spread of Renault’s suite of safety systems. Advanced Emergency Braking System (AEBS), Blind Spot Warning and Lane Departure Warning feature on all versions as standard. Renault has also made its Traffic Sign Recognition and a built-in speed prevention system standard in addition to a speed limiter and cruise control. However, adaptive cruise control is not available.

Hill Start Assist, front and rear parking sensors, and a reversing camera also feature on the standard equipment list. The rear outer seats each have ISOFIX mounting points for child seats and although Renault has yet to put the Koleos through the Euro NCAP crash tests, the company does expect it to score well.

A total of eight exterior colours is available in the Koleos range, the majority of which are demure, which will suit the car. The choice comprises of Fresca White, Platinum Grey, Nomad Beige, Universal White, Admiral Blue, Stingray Silver, Dusky Black, and Mulberry Red.

Unlike other models in the Renault range, just two trim levels are available in the Koleos, ‘Dynamique S Nav’ and ‘Signature Nav’. The Dynamique S Nav features 18-inch alloy wheels, heated and electrically folding door mirrors, and roof bars. On the inside, there is black part-leather upholstery, cup holders that can be cooled or heated, rear privacy glass, dual-zone climate control, keyless entry, and automatic functions for the headlights and wipers. The seven-inch R-LINK2 infotainment system includes smartphone connectivity via Bluetooth, Android Auto and Apple CarPlay, in addition to the inclusion of satellite navigation with TomTom LIVE traffic updates.

Building on the Dynamique S Nav specification is the higher Signature Nav trim grade. Outside, it gets larger 19-inch alloy wheels and full LED headlights. The interior has full black leather upholstery with front seats that are heated, too. Infotainment gets an upgrade to the 8.7-inch portrait touchscreen, while the rear hatch is powered for added convenience.

The Koleos comes in at an average size for the segment, at 4,673 millimetres in overall length. At its widest point, with mirrors unfolded, it is 2,063mm across, but this reduces to 1,864mm when the mirrors are folded in. At its tallest point it measures 1,678mm, but with the tailgate fully open this is 2,118mm.

As you might expect, the front-wheel-drive manual Koleos is the most economical to run according to Renault’s official figures. Combined it can return up to 57.6mpg, while its 128g/km rating means a first-year VED payment of £160. It has the lowest BIK at 27 percent and is the most insurance-friendly, classed in group 22E. The manual 2.0-litre model has higher emissions of 148g/km, so will cost £200 in the first year to tax before dropping to £140 afterwards. It should return up to 50.4mpg and has a 31 percent benefit in kind rating.

The 2.0-litre model with automatic transmission has the highest running costs with 47.9mpg combined fuel economy and emissions of 156g/km resulting in a first year VED cost of £500 and £140 after that. It also has the highest benefit in kind rate of 33 percent and is ranked in insurance group 27E.

New Renault Koleos models are accompanied by a four-year warranty from the date of first registration. This includes unlimited mileage during the first two years, followed by an additional two years that is limited to 100,000 miles. Roadside assistance is provided for 48 months from first registrations and the first 36 months of this includes European cover. Servicing is required every 18,000 miles or once a year, whichever comes first.

Pricing for the Renault Koleos starts at around £28k for the Dynamique S Nav model with the 1.6-litre manual powertrain. The more powerful 2.0-litre engine is over £30k, and if you want to add the automatic transmission (and all-wheel drive), the price increases to some £32k. The price walk to the higher Signature Nav specification is a £2,300 increase over whichever engine and transmission you choose. That's not expensive given the equipment and space on offer, but it's also unavoidable 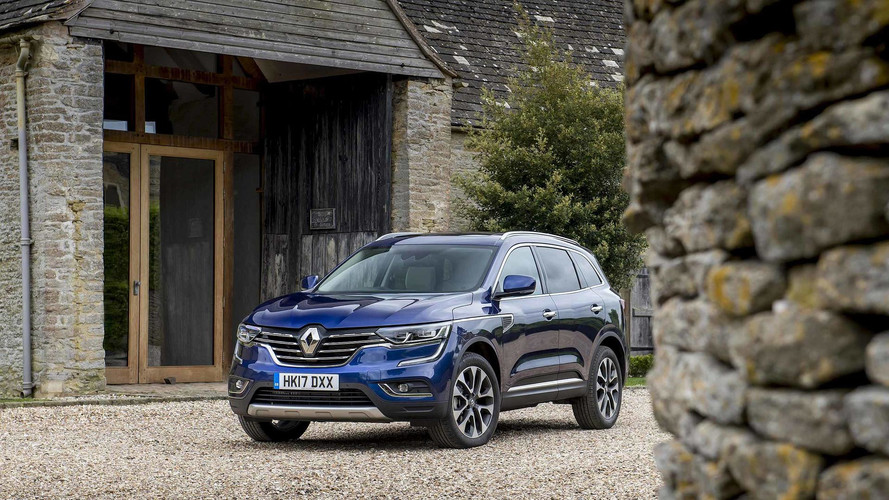