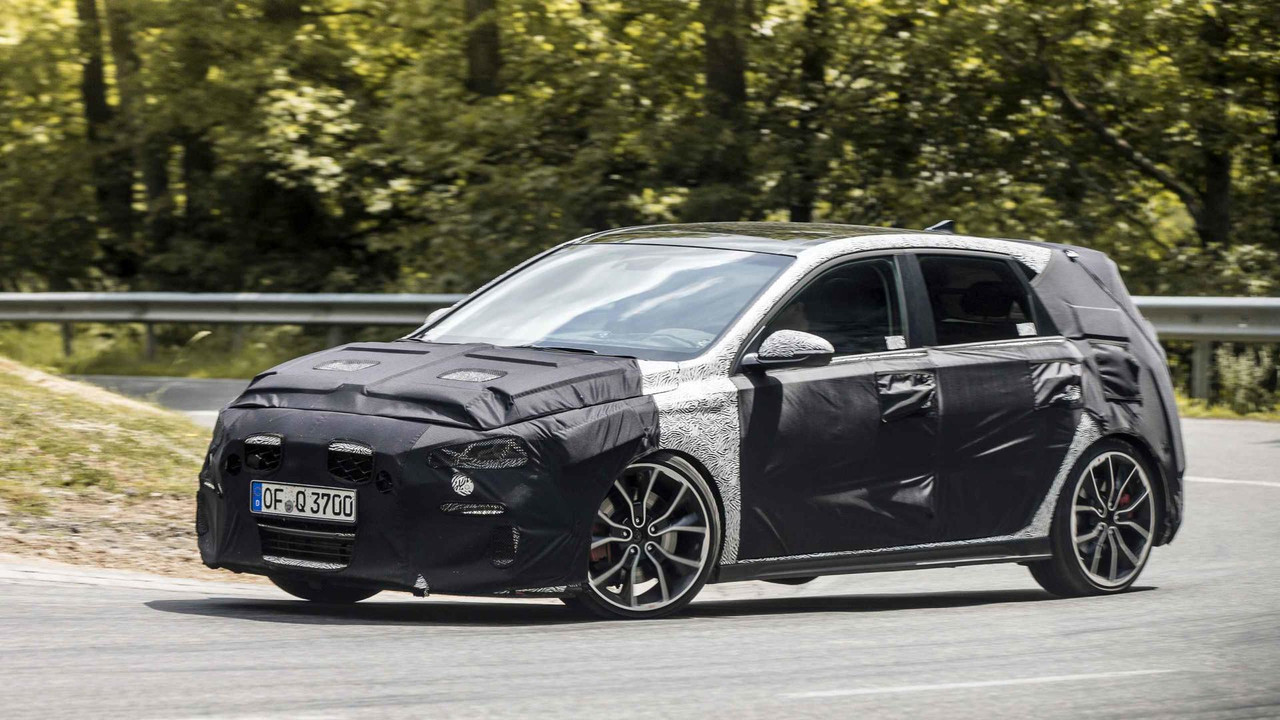 First taste of the Hyundai i30 N hot hatch is a good one.

We're not complaining, but there are a lot of hot hatches on the market already, ranging from warmed up family cars to out-and-out track day refugees and everything in between. Four-wheel drive is creeping in to the top of the segment where power outputs are spiralling, but the best-sellers are all front-wheel drive and you could argue that petrolheads are already well catered for. Hyundai disagrees. It wants buyers of performance cars to have another option and it's creating a spanking new sub-brand, called simply 'N', to make it happen.

The first model created under this umbrella is the i30 N, a front-wheel-drive hot hatch that has to be something special if it's to get the attention of the target buyer. Months before it's due to hit the UK market, we were given special access to Hyundai's engineering centre at the Nürburgring in Germany to talk about the new car, experience it around the track at speed and drive it for ourselves on some of the most challenging back roads in the world. So is it N for 'now please' or N for 'no thanks'?

As you can see from the pictures, we were driving a camouflaged engineering prototype, not the finished article, so we can't really comment on how it looks with any finality. Under the thick disguise we could make out chunkier wheelarches, a large exhaust outlet either side of a deep rear bumper, noticeably big air intakes up front and 19-inch alloy wheels on Pirelli tyres.

It's also clear to see it has plenty of 'stance' thanks to a lower ride height and the wider track. It's expected that there'll be a sportier interpretation of the regular i30's 'cascading' front grille housing the 'N' badge, and it'll be complemented by a red accent low down in the apron. Hyundai is going for subtle aggression so don't expect a large roof spoiler.

Inside, it's quite subtle too, though there will be sports seats as standard, bespoke instruments and a new steering wheel to help set the N apart from the standard Hyundai i30. We saw all-cloth and part-leather versions of those seats in different cars, but the UK specification has yet to be finalised.

The new steering wheel is worth a mention. It's good to hold, almost (but not quite) perfectly circular and features important new buttons that unlock the N's character. Below the left-hand spoke is a large blue-grey button marked 'Drive Modes'. That's mirrored on the right-hand side with another simply marked 'N' and above that is a relatively innocuous button with 'REV' on it to alter the rev-matching system. More on that in a moment.

So, you use the Drive Modes button to cycle through Eco, Normal and Sport modes, each grouping together various settings for the power assisted steering, throttle response, dampers, exhaust, stability control, electronically controlled limited slip differential and that rev-matching. That's already an awful lot of adjustment and hints at the ability of the i30 N. But there's more. Much more.

Press the N button on the right and the most extreme group of settings is put in place, but press it again and it's the 'N custom' mode, which allows the driver to use the responsive touchscreen mounted high up in the centre of the dashboard to choose any combination of all the systems he wishes. Impressive.

The rest of the interior is familiar from the regular i30, so it's well-made and spacious for the class, if uninteresting from a design perspective. Hopefully there'll be a few N-specific flashes of colour in the showroom model that we didn't get to see.

That really does depend on which settings you've chosen, as there are significant differences between the modes –tangible step changes in fact, which is not always the case with such systems. For research's sake we briefly tried the Eco and Normal modes and can confirm that the throttle response is softened off, the exhaust is quiet and the suspension is comfortable even over poor surfaces.

No, it's not quite as supple as the standard i30 on squishy tyres, but you don't buy a hot hatch with that expectation. For the segment, it's good. Naturally, we spent most of our time in Sport mode and playing with the custom N settings.

Under the bonnet is a turbocharged four-cylinder 2.0-litre petrol engine. Hyundai hasn't confirmed its output as yet, but it'll be up to about 280hp for the Performance Pack model and about 250hp for the standard car. We tried the former and it's estimated that there's about 280lb-ft of torque produced as well. It certainly feels as quick as those numbers suggest it will, with a guessed-at 0-62mph time of a fraction over six seconds.

The engine, like so many four-cylinder turbo units, sounds purposeful rather than tuneful, though the exhaust sounds will distract you from that. It comes with three different settings – Normal, Sport and Sport+ – and the latter really is brilliant, popping and banging superfluously on the overrun when you back off the throttle and even between gear changes. It adds to the fun. Crucially, it does so only when you want it to.

And it's the same for everything else. The rev-matching system even has three levels (one of them being 'off') where the throttle is blipped automatically on down-shifting and cleverly it also matches the engine speed where needs be on up-shifts.

The six-speed manual gearbox itself shows promise with a slick and almost mechanical feel through the gate. We were told that the production version will have a slightly shorter shift than in the prototype we drove, while a recalcitrance to slot into second gear from third is said to be an identified and sorted issue.

The electric power assisted steering is well-judged and though it weights up in the sportier modes it never gets unnecessarily heavy. There's decent communication to the driver through it and the chassis itself as to how much grip there is on offer.

Impressively, the i30 N obviously uses its four tyres to good effect rather than it feeling like the front tyres are doing all the work. This makes it super stable at really high-speed cornering (as we experienced on the track at eye-widening pace) and under heavy braking. Even mid-corner lifts don't unduly unsettle the rear of the car to make it feel nervous.

That's partly thanks to the e-LSD (electronically controlled limited slip differential) that is standard on the Performance Pack car. This also enables more of the engine's output to be used by the front axle more of the time as the torque is divvied up between the front wheels. It means that, on the exit of a really tight corner, you don't have to be cautious with your throttle inputs waiting for the front end to bite.

Instead, you get on the power earlier in the corner and marvel at how the e-LSD helps the power pull the car around the corner instead of washing the nose wide. It's even more impressive when you switch the ESC stability control to Sport or turn it off completely. The net effect is devastating cross-country pace mixed with a lot of fun at the wheel.

A final note on the damping. For our lap on the Nordschleife, the engineer put the car into Sport mode, not Sport+, which enabled it soak up the bumps and surface changes while seemingly not compromising on body and wheel control. It could be the perfect setting for British B-roads.

First impressions suggest that Hyundai's engineering team has done an astounding job of creating a hot hatch that mixes everyday civility with really engaging dynamics, certainly in the Performance Pack equipped version of the i30 N.

It has such a wide breadth of ability that it compares favourably with both the Volkswagen Golf GTI and the more extreme performance options on the market such as the new Honda Civic Type R. We'll reserve final judgment until we see and drive the finished product later this year, but if Hyundai can deliver this car for a competitive price it'll certainly have the attention of the car enthusiasts of the world.