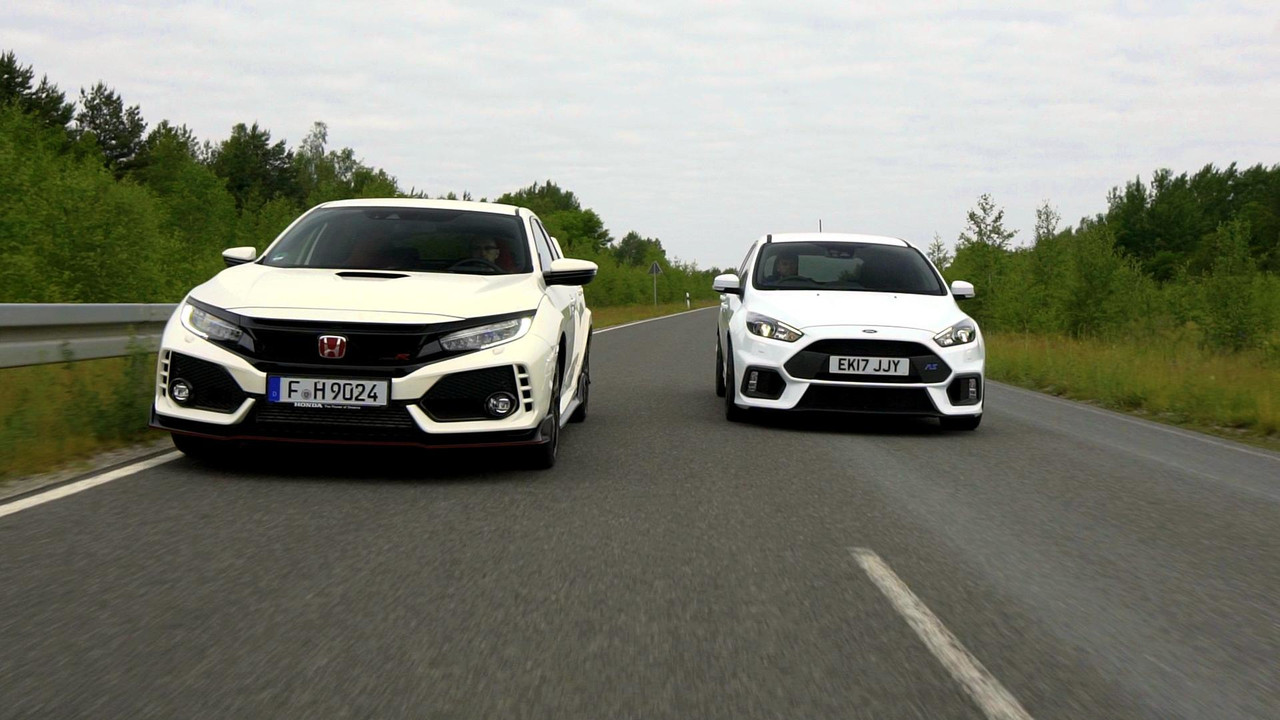 The two biggest rivals up against each other in a hot hatch grudge match.

The Honda Civic Type R has been released to the world under a blanket of hype, expectation and big wings. But before it can be crowned king of the hot hatches, it needs to meet and beat our current favourite, the Ford Focus RS.

Yep – if you were thinking the previous generation ‘FK2’ Civic Type-R was barely on sale two years, you’d be right. That car was developed at the end of the Civic product plan, whereas the new version, known as ‘FK8’, has been developed from the start.

Hot hatches need presence and the new Type R certainly cuts an imposing shape. It even manages to make a Focus RS look visually malnourished. Clearly, there’s a lot going on and based on comments we’ve been reading from the interwebs, it may prove a bit too exotic for some tastes.

Whatever, all the fins and wings have been designed to add a few more mph here, shave a tenth off there or offer genuine downforce. The ridges on the roof, for example, are known as vortex generators and they help channel air on to that huge rear wing, the shape of which was informed by Honda’s World Touring Car Championship car.

Enough already. Which is better?

First blood goes to the Type R. The driving position is low-set thanks to Honda shifting the fuel tank  back and reducing the driver's hip point. It’s now 50mm lower than the previous model and it makes the RS feel like you’re sat in a booster chair.

Your eye from the Ford umpire’s chair then gets drawn to the boggo cabin and a trio of tacked-on gauges, whereas Honda has clearly spent more time on home improvements, offering a polished aluminium knob and red highlights to mark out its higher performing status.

Unfortunately, both cars offer infotainment systems that frustrate: Honda’s purge of physical buttons makes you too reliant on a touchscreen, while the Ford’s satnav is inept. If you want a hot hatch with a class-leading infotainment system, buy a Volkswagen Golf R.

This is where the RS punches back, and with some force. If we’re talking traffic light grand prix, the RS has the new Type R licked thanks to a turbocharged 2.3-litre petrol engine developing 345hp, four-wheel drive and launch control. It slingshots off the line in some style with a 0-62mph time of 4.7seconds, creating a gap the Honda can never close.

It’s no secret that front-wheel drive will stifle a 0-62mph sprint, but the Type R also carries a performance deficit. Revisions to the turbocharged 2.0-litre petrol engine as used in the previous Type R have only increased power from 306hp to 316hp. On paper, it doesn’t look like a vast amount of progress has been made, but the in-gear performance is now much closer to the RS than any of the Top Trumps would suggest.

Top speed has increased thanks to the trick aero and in good conditions, you’d expect to put in lap times that could better the Ford. Not only is the Type R nearly 150kg lighter, the vented Brembo disc brakes up front halt the car more keenly, are easy to modulate and, unlike the Ford’s solid Brembo front discs, reveal little sign of fade during heavy use.

This largely depends on what sort of driving you enjoy. The Ford has more ways of going stupidly quickly – it’s great fun to either chase the 6,400rpm redline, surf its wave of torque and short shift a few ratios or even rear-wheel steer on the track in a dedicated drift mode. The Honda engine meanwhile is another level of frenetic and wants to constantly headbutt its 6,500rpm rev limiter if you’re not paying attention to the LED shift light.

Both cars feel composed and super stable during high speed cornering – the RS having the assurance of all-wheel drive, the Type R now benefiting from a longer wheelbase and more sophisticated multilink rear suspension – but how they attack the corners is different, too.

The Honda rewards precision and staying in the fizzier top third of the rev band. The quick steering helps you tuck the front end in, aided with a dab of light braking applied to the inside wheel. Squeeze the throttle pedal and there is no forearm-wrenching torque steer, where the steering wheel pulls from side to side. Instead, the Type R just grips and grips as you continue to build speed.

The RS is a complete hooligan by comparison. Its body movements feel more pronounced on a fast B-road, but it’s like the car is constantly communicating with you. You can feel drive shift from the front wheels to the rear as you mash the throttle when exiting a corner, and you’re met with rally-style rasps and pops on the overrun. It's hugely entertaining and more than a little addictive.

The Honda’s gearbox is slick to use although it doesn’t quite possess the rifle-bolt sharpness of some Type R models of old. The Ford offers a more consistent action to punching through all six gears, but we'd love it to also have Honda’s satisfyingly mechanical precision.

So is the Type R more extreme to live with?

Not really. The previous Civic Type R was terrific in the dry, terrifying in the wet and shook all your fillings loose in R+ mode. The new Civic is much more versatile than its looks would ever suggest and even features a Comfort mode.

The big wing is positioned in such a way that it doesn’t block the rear-view mirror and there’s still great passenger space and a 420-litre boot on offer. Considerably more space than the 260-litres on offer in the RS.

This is tough. Both are so similarly priced. Which one do I choose?

If you’re going to be doing a lot of track days, choose the Civic Type-R. It has reached the apex of how much performance you can pack into a front-wheel drive car and still rewards precision and progress with a hyper-alert engine and beautifully weighted controls.

However, on more roads, more of the time, it’s the Ford Focus that continues to deliver the biggest grin. The extra power and all-wheel drive pummels roads into submission, while the rear-wheel drive bias gives the car an athleticism and agility that would normally be reserved for a front-wheel drive car. The new Civic Type R is very good indeed, but the Focus RS is a future classic in the making.