More of the same from Mazda, but that's no bad thing.

Updated and largely new for 2017 (though you’d struggle to spot the differences at a casual glance), the CX-5 continues Mazda’s recent form of creating good-looking, good-driving cars with excellent quality and no small amount of practicality. While it’s looking for sales in a savagely competitive corner of the market, the CX-5 has the looks, the handling, and the ability to give its rivals a few headaches.

Did you know? The CX-5 is the first European Mazda to get an electric tailgate.

While it sticks very closely to the template of the original 2012 Mazda CX-5, the new version makes some useful improvements, especially in terms of refinement. It’s also roomy, practical, has Mazda’s usual strong build quality, looks a little sharper than before and has an excellent 2.2-litre diesel engine. It does lose out a little with a poor petrol offering and a price tag that is a little high compared to such rivals as the Seat Ateca and Nissan Qashqai. 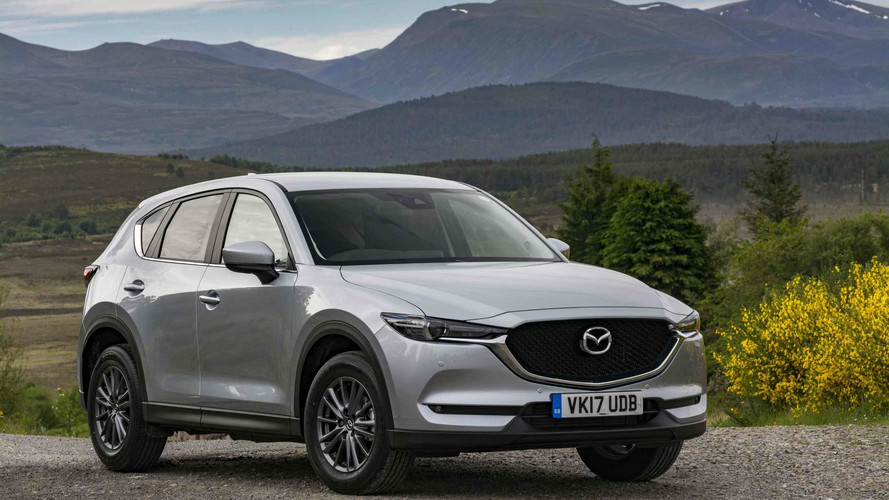 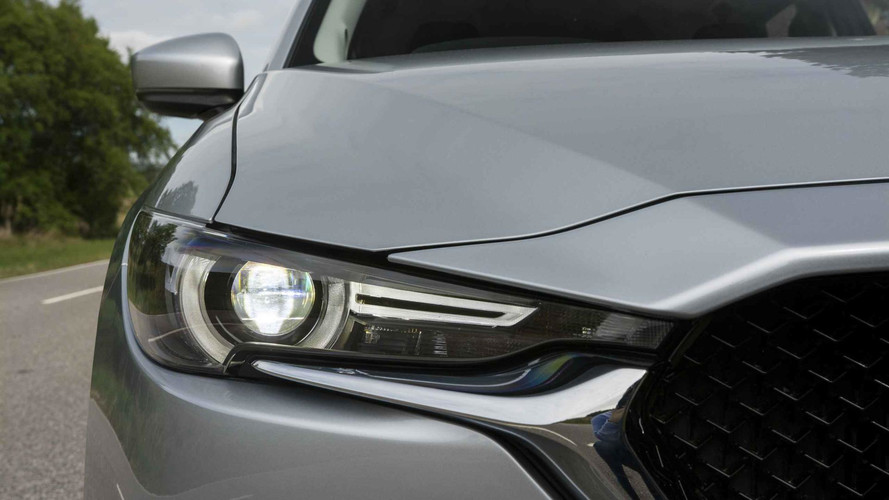 The CX-5 Mk1 could arguably be called the car that saved Mazda, as its strong sales helped prop up the Japanese company's balance sheet in the years immediately after Ford sold off its shareholding in the firm. Little surprise then, given that there’s an understandable reluctance to mess with success, that Mazda has reused the same ‘SkyActiv’ platform and chassis as the original and the new CX-5 initially looks little different.

The silhouette is basically identical, the overall shape and styling much the same. That said, credit to Mazda’s styling team, although it’s similar the new CX-5 does look sharper, more attractive and, dare we say it, more premium than before.

The best aspect is from the front, where you can really appreciate the lower bonnet line (which Mazda claims makes a significant contribution to improved aerodynamic performance), the slimmer lights and the radiator grille with its floating, almost 3D-effect. The rest of the body is subtly unadorned, as Mazda said that it wanted to follow Japanese tradition of styling by removing, rather than adding lines. 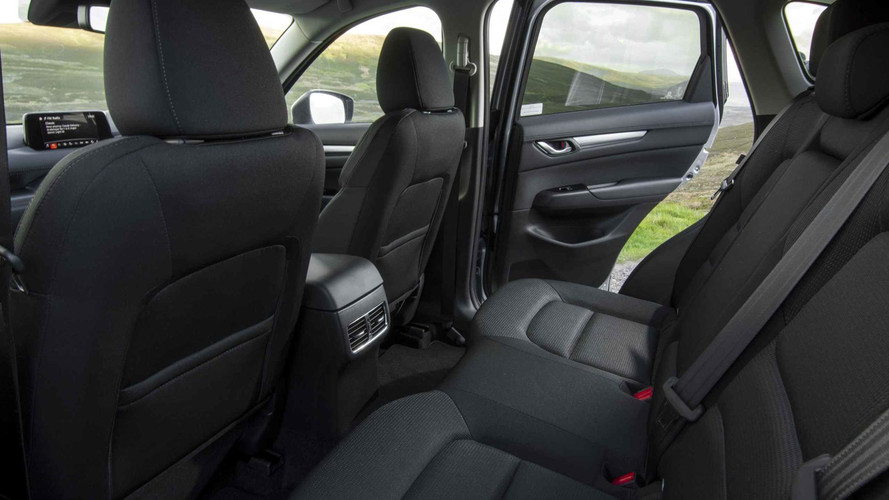 If you’ve recently sat in a Mazda6 saloon or an outgoing CX-5 then there’s going to be little inside the new car to complain about, but equally nothing about which to become much excited. The instruments and switches are basically ported over wholesale from the 6, and while there has been an attempt at some styling interest by lining up the perfectly symmetrical air vents, there’s nothing much else in the cabin to really excite the eye.

Quality levels are very good, as they always are with Mazda, and if some of the materials aren’t exactly up to Audi levels, then at least there’s nothing wrong with the way they’re put together. The seats are clearly borrowed from the Mazda6 too — they have the same sensation of being too tight across the shoulders at first, but there seems to be enough give in them to become more comfortable over time.

The CX-5 is a long way from being the most practical car in its class. While rear legroom and headroom are both pretty decent, Mazda has decided to make the outer two rear seats more heavily sculpted than before, increasing comfort and support for anyone who sits in them. That has robbed space from the centre rear seat, which now probably doesn’t have enough width to squeeze in a child car seat (although some of the more narrow ones might fit).

The boot is square, flat and pretty free from obstruction, but it’s almost surprisingly small. It offers just 506 litres of space below the parcel shelf and only 1,620 litres packed to the roof with the rear seats folded. There’s also no seven-seat option (although Mazda is working on a three-row CX-8 for the US and Japanese markets, so that may come to Europe eventually). While the CX-5 is just about practical enough for day-to-day family use, you can snap up a far more spacious Skoda Kodiaq or Peugeot 5008 for less money, which shows where the CX-5 falls short. 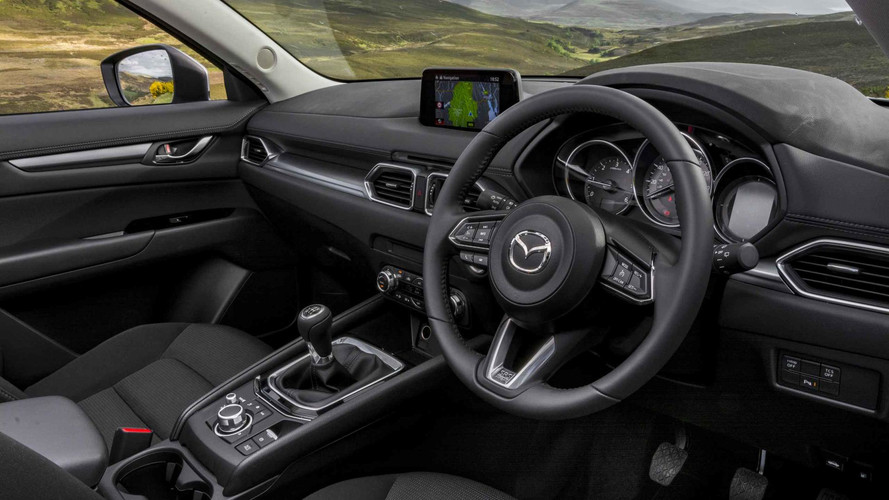 The CX-5 is the first European Mazda to come with a power-operated tailgate, which kind of shows you that Mazda has spent the past few years concentrating on the fundamentals (creating and then developing its SkyActiv range of engines, chassis, and gearboxes) and expanding its model range, rather than on fripperies and optional extras.

That’s really shown up by the CX-5’s infotainment system. The 7-inch screen that juts, BMW-style, from the centre of the dash, is an inch too small (at least) and a day (or year) too out of date. While Mazda refers to it as a colour screen, few of the displays go beyond grey, light grey and red, and the menu layout and graphics look very old hat.

The fact that you can control it as a touchscreen or using the iDrive-style click-wheel between the seats is useful, but that’s about as good as it gets. The navigation system is also quite suspect, and more than once has sent us on a needless diversion on tight and slow backroads, when a longer journey on main roads would actually have been quicker. At least the head-up display has been improved.

Mazda’s old HUD, with its pop-up plastic monocle, was fine, but always seemed to be set about two inches too low. The new system projects straight on to the windscreen and is brighter and more legible, plus it now comes with traffic sign recognition. 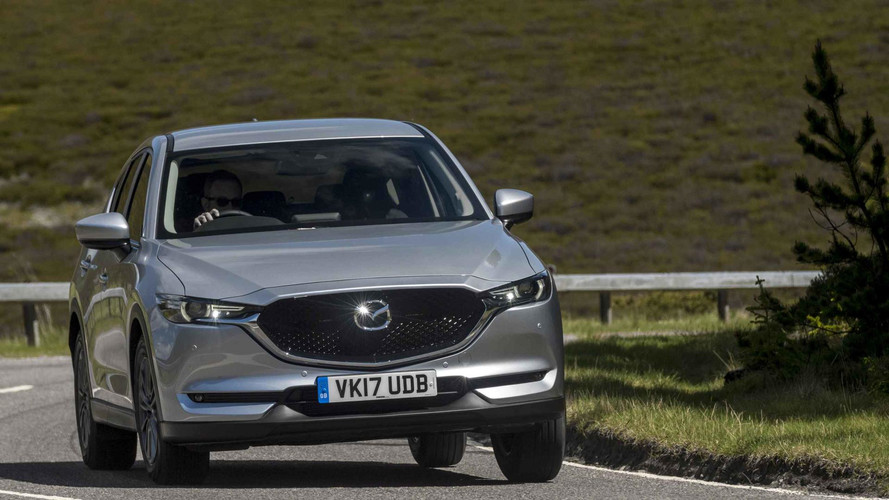 Here’s where the CX-5 comes good, because it remains one of the best mid-size crossovers to drive, even though competition in this arena has become ever sharper. The steering can be a touch odd at times, with slightly inconsistent weighting and a tendency to become absurdly heavy during parking manoeuvres, but that aside, the CX-5 feels rather wonderfully poised and deft to drive. OK – it’s a tall SUV with space for five and a diesel engine, so it’s not going to give its cousin, the MX-5, any trouble on a twisty road – but by the standards of the class it’s good.

It does understeer when pushed to the limits of the tyres' adhesion, but in a progressive and controllable way, and the chassis always seems to have a little grip in reserve. With optional four-wheel drive it’s even better, and can tackle some mild rough-road terrain. The ride quality is a little variable though – it’s probably best to avoid the optional 19-inch alloys in order to keep the springs under some sort of control.

Mazda has introduced its G-Vectoring control system, already in use in the 3 and 6, to the CX-5. It’s essentially a torque control system that alters the engine’s output to help make the steering a little sharper, the turn in to corners a little quicker, and also to help keep the car a little more stable on a motorway. It works well, or at least we assume it does, as it’s all but impossible to detect it working — which is just as Mazda has intended.

Of the engine line-up, the mid-ranking 150hp 2.2-litre diesel is the outright star. The entry-level 2.0-litre SkyActiv-G petrol engine has an extra 10hp on its side, but with just 155lb-ft of torque it’s 118lb-ft down on the diesel and so struggles. It’s also surprisingly wheezy and noisy – once warmed up the diesel is notably more refined. You could spec the CX-5 up with the 175hp 2.2 diesel and a six-speed automatic transmission, but that engine is noticeably thirstier than the 150hp version, and the six-speed manual gearbox is so delightful to use, that we just wouldn’t bother.

It is worth mentioning the CX-5’s new-found refinement. Mazda’s engineers were visibly proud when they first pointed out the car’s noise, vibration, and harshness suppression measures to us and they’re right to be — engine (thanks to a clever piston design, created to help keep clatter and rattle to a minimum), tyre, road, and wind noise are all clamped down upon, and the result is a very calm, quiet, and relaxing cabin. 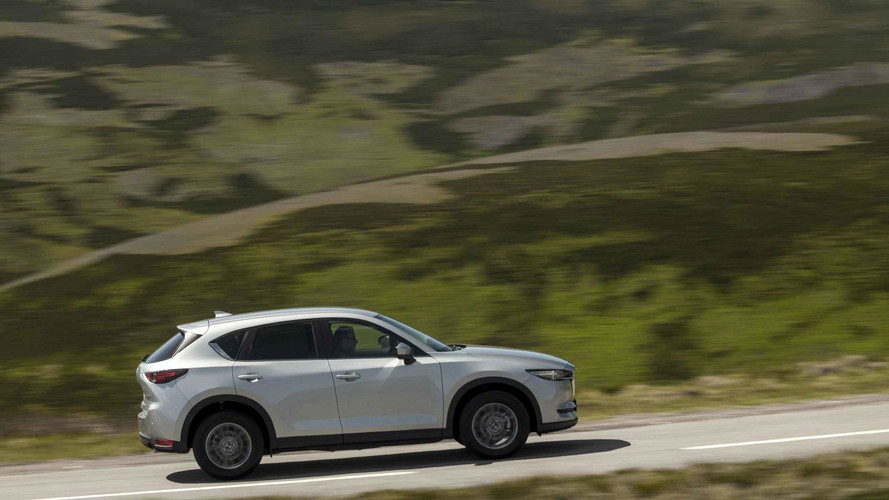 The CX-5 uses Mazda’s i-ActiveSense safety package, which adds a forward-facing camera and a millimetre-wavelength radar so the car can automatically brake to avoid a collision from speeds as high as 50mph. It also has a pedestrian detection function, and works in reverse at slow speeds too.

That radar also governs the active cruise control, which can now be had with a stop-and-go function for creeping along in heavy traffic. There’s a new traffic sign recognition system as well and new LED headlights that selectively dip sections of the main beam to keep as much light on the road as possible without dazzling other drivers.

The CX-5 is not a massive car by any means, but remember that those wheelarches are a touch wider than those of 3 Series Saloon. 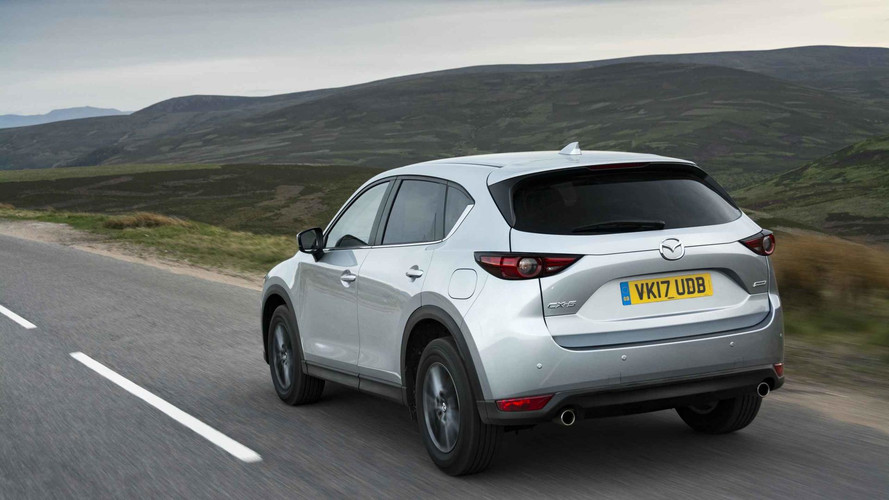 The CX-5 has always had a problem of being just slightly too thirsty for its own good. Whereas rivals seem to be able to extract at least 45mpg in daily driving, the CX-5, in spite of Mazda’s focus on low weight and low friction for its engines, often struggles to get past 40mpg. That seems to have improved with the new version.

For the 150hp diesel, against an official figure of 56mpg, you should be able to squeeze 45mpg out of it on a regular basis. The 175hp version, though, will in general be much thirstier. Its official average is 52mpg, but in reality it’s going to be under 40mpg much of the time.

The petrol 2.0-litre engine’s 41mpg average will be closer to 30mpg. Adding the optional six-speed automatic gearbox into that mix will make matters worse again (Mazda is defiantly sticking with six ratios when rivals offer seven, eight, even nine), but the all-wheel-drive system has been redesigned to make it less of a drag on economy than before.

Emissions are a little high as well — the 150hp diesel is now rated at 132g/km, where its predecessor managed 119g/km in some versions.

It’s too early to call the new CX-5’s reliability, but Mazda has fallen in the JD Power ratings, coming only one place above Fiat in 2016, which is only one place above the industry average. That said, in the past, Mazda has proven itself a maker of solid, reliable cars, so we’ll give the CX-5 the benefit of the doubt for now.

The CX-5 comes with a three-year, 60,000-mile warranty, a three-year paint warranty, 12-year anti-perforation warranty, and needs to be serviced every 12,500 miles. Mazda has a three-year inclusive service plan with prices starting from £499. 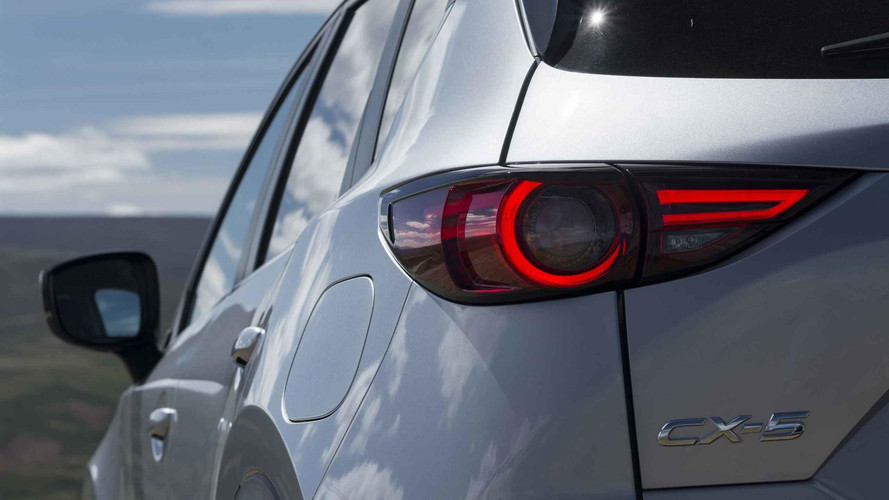 The thing with the CX-5’s pricing is that your view of it depends very much on your view of the Mazda brand. If you think Mazda can mix it with the premium boys, then it’s excellent value, offering a lower price than the likes of a BMW X1 or Mercedes GLA, but with more space and often with better performance for the money too. If you think of Mazda as a more mainstream brand, then it has some issues.

There’s no getting away from the fact that the likes of the Seat Ateca and Skoda Kodiaq are roomier and cheaper, and the Volkswagen Tiguan is similarly priced, but arguably has a superior brand image. Prices for the CX-5 start from £23,000 for a petrol model and £25,000 for the 150hp diesel, but it does help that there are just the two, well-equipped trim levels, which does allow Mazda to claw back some of the price advantage of some rivals.