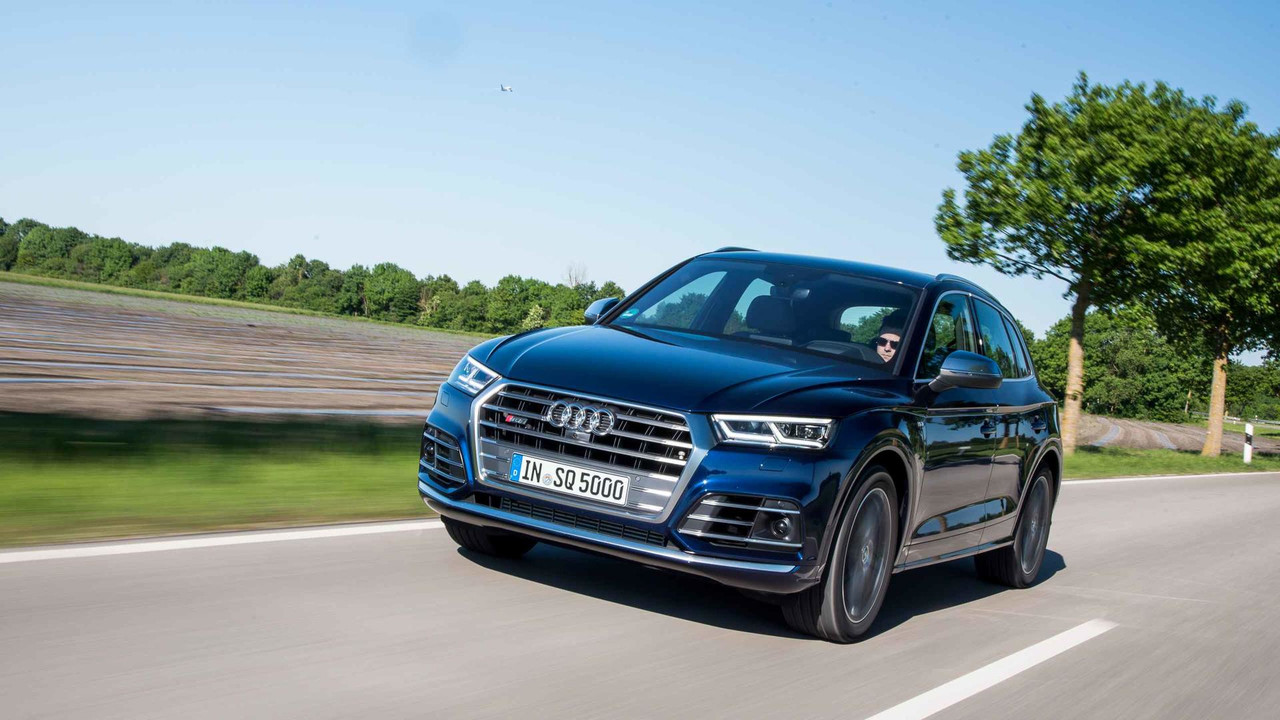 The Audi SQ5: great chassis, shame about the steering.

Audi’s original SQ5 was both the first diesel S-model and the first of its Q-branded SUVs to be given the performance treatment, and it went on to be a resounding success here in the UK. Roughly a fifth of all MkI Q5s on our roads are powered by the 313hp/480lb ft biturbo diesel engine, showing that the Audi’s blend of pace and parsimony was a massive hit with customers.

For the second generation, though, the German company has decided to launch the SQ5 with a 3.0-litre TFSI turbocharged petrol engine, borrowed from the Audi S4 and S5. There was a petrol version of the original SQ5 in other markets, but we only got the diesel here; so a TFSI SQ5 is something unusual. It also represents the first time any S-model Audi sold in the UK will have a choice of engines.

A diesel SQ5 MkII is on the way for 2018, but for now, what we have is a slower, thirstier version of what went before. Has Audi shot itself in the foot, then, or is there method to the German company’s seeming madness with the SQ5 TFSI?

About the most contentious point of the SQ5’s design revolves around the utterly fake ‘quad exhausts’. You don’t have to peer at them too closely to spot that they are all blanking plates, the real (twin) pipes instead lurking behind the bumper and curved downwards, in the fashion you used to get on turbodiesels in the early 2000s. Quite why Audi didn’t a) just do away with this fake trim entirely, or b) manage to route the exhausts into at least one of the exits for some authenticity, we don’t know.

But if we tell you that’s the main issue with the SQ5, then it gives you some clue as to the attractive, if somewhat reserved aesthetic of the SUV. Only if you find the regular version’s Q7-apeing appearance abhorrent would the SQ5’s looks bother you. It wears all the typical S Audi trimmings: aluminium-effect door mirrors, roof rails and window surrounds; a big single frame grille with a matte grey finish; revised bumpers and side skirts, as well as a rear roof spoiler; the 'quad' exhausts; large, lovely alloy wheels, in this instance 20-inch items; and subtle ‘SQ5’ badging here and there. We think the hot SUV looks great, especially in the two signature finishes of the launch cars, Azores Green and Navarra Blue (either metallic costing £645).

Inside, it’s much the same story – exquisitely rendered, if not the most adventurous of dash designs. But nobody in the mainstream does touch and finishing like Audi, so the console just feels uniformly marvellous, while the cabin is spacious enough for four tall adults. Boot space has also risen from the old model to the new, with the SQ5 now capable of carrying at least 610 litres of stuff in the back with all the seats in place.

Standard equipment is generous for the £51,200 an SQ5 TFSI will set you back, as you get the 20-inch wheels, full LED lights all round with High Beam Assist, five-mode Audi Drive Select, S-tuned suspension with electronically controlled dampers, the 8.3-inch MMI Navigation Plus infotainment system, cruise control, a 10-speaker, 180-watt sound system, leather upholstery, electrically adjustable sport seats in the front, Keyless Go, three-zone climate control and more.

But items on the options list include the stunning 12.3-inch Virtual Cockpit, Adaptive Air Suspension, variable speed-dependent Dynamic Steering, a sport differential, and trinkets such as a Bang & Olufsen 19-speaker surround sound system, panoramic roof, adaptive cruise control, and so on. Two things here: one, that means the £51,200 Q5 is likely to be a fallacy, as most are surely going to be kitted up to £60,000 and more; and two, our test cars were fitted with the first four items above, so they were particularly high specification in terms of the chassis.

Infuriatingly well, which might sound like an odd phrase, but allow us to explain. Years ago, fast Audi reviews followed a template: they would praise the car for its powerful drivetrain and epic quattro traction, and then lament a hard ride, numb steering, and lashings of fun-sapping understeer. Those days have, thankfully, long since passed, but the SQ5 TFSI is definitely a car that is held back by one of these three facets.

And it’s the steering. We’re hoping against all hope that the regular, passive system that is standard fit is better than this application of Dynamic Steering, because there is little of either weight or feedback to be found at the rim of the Audi’s wheel. Flick through all five modes of the Drive Control settings and you won’t find a programme that offers anything but inert, powder-puff steering. It’s at least consistent in its responses, which is not something that can always be said of Audi Dynamic Steering, but we really can’t recommend you fit this option to your SQ5.

This aberration from Audi’s bad old days is all the more vexing, mainly because when you can finally establish some sort of communication with the SQ5’s chassis, what you discover is a pretty well-sorted performance SUV. Grip is immense, traction is unrelenting, understeer is absent. Put all three together with damping that does a fine job of controlling the mass of the 1,870kg SQ5 (there’s a touch of roll into corners, but it’s not an alarming amount) and this is a disarmingly quick car across the ground. It even has the feeling of rear-axle adjustability.

We say ‘disarmingly quick’, as the other gripe about the petrol SQ5 is its lack of a distinct voice. This is a phenomenally refined machine in every respect, as the air-sprung ride is plush in the extreme (even on 20s), while it can muffle wind and tyre noise almost completely at all speeds – sadly, it does the same thing to the zingy 3.0-litre V6 engine.

Creamy smooth in its power delivery it may be, but there are no fireworks in terms of the soundtrack or any high-revs shove; rather long gearing for the super-slick eight-speed Tiptronic auto sees to that. There is a sort of pleasing background throb from the 3.0 under hard acceleration, and the hidden exhausts do their best with some muted pops and bangs on the overrun/downshifts, but if you were hoping the TFSI was going to produce all the right notes for a performance SUV, you might be disappointed by its restrained vocal character.

One final whinge relates to brake pedal feel, which is a bit spongy and unconvincing at times, even if the actual stopping power is fairly meaty. In essence, the SQ5 is highly polished and incredibly capable as a sports SUV. But, like so many in this class (Porsche Macan excepted), for outright driving thrills, it comes up a little short of true greatness. And that’s mainly down to the unpleasant steering.

If you decide to walk into an Audi dealership and put down at the least requisite £51,200 on the SQ5, you really won’t be disappointed. Of all these midsized performance SUVs, the Audi is up among the best in the class in terms of chassis ability and performance, so there’s no reason not to buy one. If it had better steering, though, or a slightly more alluring voice, we might have been a little more effusive about the SQ5 TFSI.

As it is, we admire it, but we don’t absolutely love it. And we can’t help but feel that the impending torque-heavy TDI SQ5, when it finally arrives next year, is therefore going to make the TFSI something of an irrelevance.