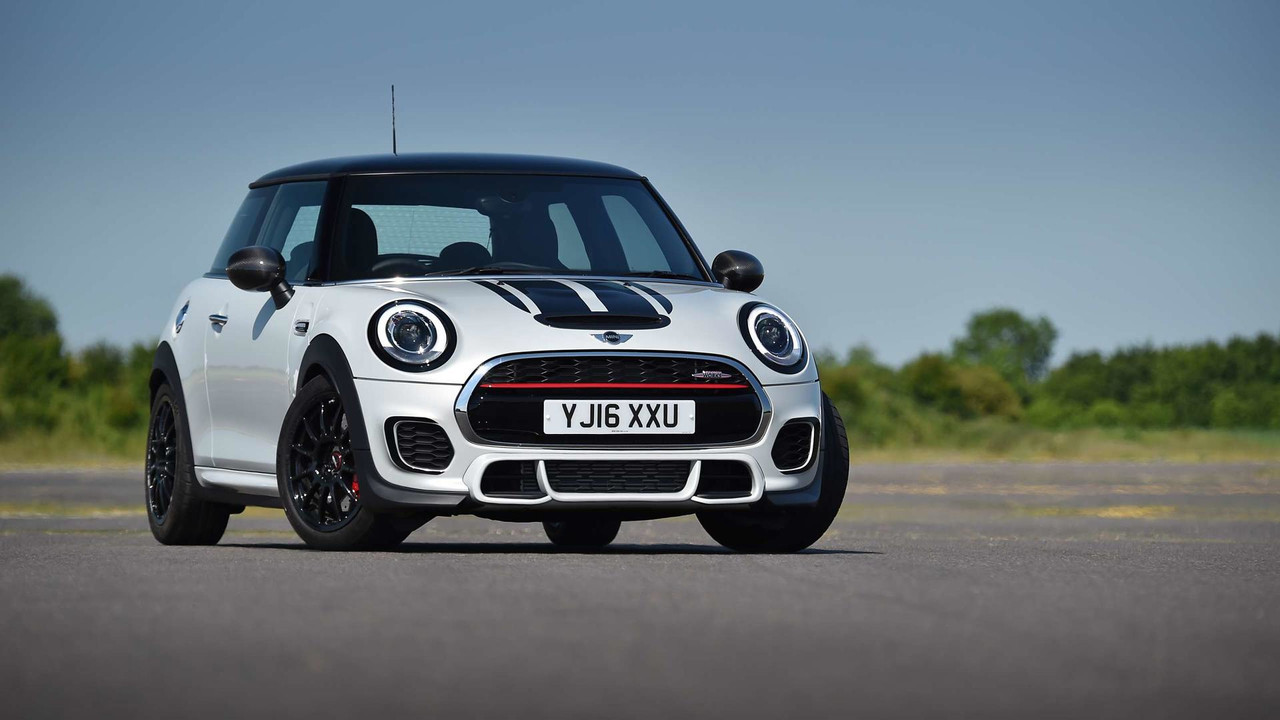 The ultimate iteration of the current generation of Mini Hatch, the John Cooper Works (JCW) Challenge is a limited-edition version of the already-pretty-special 231hp 'standard' JCW. Fitted with a load of hardcore driving enthusiast parts, it is supposed to be the ultimate Mini for track work – yet retaining a veneer of civility for road use.

It’s sold only as a three-door and it is incredibly expensive, with a starting price of £32,000 (the JCW starts from £23,780), but as this sort of minimal production run car (just 100 Challenges have been built, all for the UK market) is a sound investment, perhaps the Challenge’s unique blend of talents is worth shelling out for.

The Challenge sits at the top of a wide variety of performance-oriented Mini models. The Hatchback alone (excluding the diesels, including the potent Cooper SD) has the Cooper S, the new Cooper S Works 210 and the JCW. But there are JCW versions of the Convertible, Clubman, and Countryman, as well as Cooper S variants too. With the Cooper S Five-Door also on stream, that makes for 11 hot models already, which is certainly plenty of choice for the Mini aficionado.

Aside from its unique White Silver metallic paint with contrast black roof, twin racing stripes and build-plaque numbering on the side indicators, and of course the black alloys (we’ll come back to those), then the Challenge looks much like a JCW. No bad thing, as the JCW is a great-looking hot hatch and there’s plenty of intent about the Challenge’s stance that makes it feel special as you’re approaching the car, round key fob in hand. It’s as you draw closer that you should notice the other Challenge-specific addenda, like the JCW Pro Aerokit (front splitters, rear diffuser, roof spoiler extensions) and the carbon fibre air intake and door mirrors.

Inside, there’s a build-number sticker on the passenger dash fascia and the Bluetooth fob that enables the louder setting of the Challenge’s JCW Pro exhaust, but other than that it’s very similar to the JCW, barring white stripes on the black sports seats. Furthermore, with a fixed specification, there’s no way to personalise the Challenge in the manner that you could any other Mini, and you’ll have to make do without factory-fitted satnav to boot.

Perhaps it’s worth outlining, then, what makes the Challenge truly special. The tally of oily bits fitted to the Mini reads like an avid track-day enthusiast’s ‘must-have’ shopping list. Nitron coilover springs and adjustable shocks are fitted, which allow for tweaking of ride height, damping (through 20 different stages, although not from within the car – the adjuster is on the top mounts of the struts), and camber, the Challenge running negative camber on the front axle for sharper turn-in.

Talking of which, there’s a Quaife automatic torque-biasing limited-slip differential on said axle to further aid front-end bite, while the lightweight Team Dynamics 17-inch alloys (saving 1.5kg of unsprung weight per corner) are wrapped in super-sticky Michelin Pilot Sport Cup 2 tyres. The alloys might be the same diameter as a JCW’s wheels, but they’re also half an inch wider, with 215-profile tyres. Brakes are the JCW’s grooved and part-drilled 330mm front discs with four-pot Brembo callipers, although specific Mintex pads give even more stopping power.

But while the chassis hardware is seriously uprated, the Mini JCW’s 2.0-litre Twin Power Turbo petrol engine is not. Power stands at the same 231hp and 236lb ft for the Challenge, which (bizarrely) is 15kg heavier than a standard JCW. This means its 0-62mph time of 6.3 seconds, while decently quick, is nevertheless two-tenths behind the automatic JCW’s 6.1-second sprint.

However, the Challenge isn’t about on-paper figures, it’s more about offering the most focused drive of any Mini yet seen – including the stripped-out, two-seat GP1 and GP2 derivatives of years gone by. So can it deliver on that brave promise?

It’s a stonkingly rapid, hugely involving machine, the JCW Challenge, but there is the sneaking suspicion that the balance of road-versus-track has tipped too far in the direction of the latter. According to Mini’s spokespeople, the Challenge demonstrator should leave the press workshop in its softest settings, but that makes us wonder what the car would be like in its more extreme set-ups, because it’s an incredibly fierce road machine.

Barely 20 metres after setting off you’ll notice the ride quality, which is rigid to the brink of uncomfortable. The JCW Challenge makes no effort to breathe with the road, thudding over imperfections and compressions in an angry fashion. The steering wheel is also alive in your hands, writhing this way and that, as the aggressive negative front camber and Quaife differential see the Mini snorting and snuffling through crests and dips in the road that your eyes simply don’t register. The brakes don’t feel massively confidence-inspiring when cold and if you press the Bluetooth fob three times, then the Challenge’s exhaust becomes rudely noisy.

So, for just moving around on the roads in a relaxed fashion, the JCW Challenge is hopeless. It lacks any of the finesse of the road-biased JCW and is a million miles away from the refined 192hp Cooper S. Bear in mind this latter car starts at less than 20 grand…

However. The Challenge might not reward a smooth, fast-flowing driving style in the fashion any other performance Mini will, but what it does do is transform into a proper gem if you start treating it rough. Like any LSD-equipped front-drive hot hatch, the Challenge responds beautifully to the totally counter-intuitive cornering approach of getting on the throttle long before the apex. Try and go slow in, fast out, and the Mini will feel ragged and annoying, but hammer onto the throttle pedal as early as you dare and the diff fires torque at the outside front tyre, that one wheel seemingly dragging the entire car round the bend after it.

Strong, decisive inputs reveal steering that’s judged beautifully and with heat injected into them, both the Michelins and the brakes work wonderfully. Did we mention the Challenge is a six-speed manual only, the purist’s choice? We didn’t? Well, it is. And it’s a fine, if not brilliant, transmission to use, although the gearing is a bit longer than is strictly necessary.

The result is a Mini that’s unbelievably fast across the ground if you’re brave with it, but then paradoxically that makes it one of those performance cars where its best on-road display is only accessible at illegal speeds. And the damping never settles down properly. On badly rucked-up country lanes, the abrupt vertical movements of the body feel harsh and borderline terrifying when you’re moving at higher velocity.

Thus, the pragmatist in us concludes with this: on the same day we sampled the Challenge, we also got the chance to drive the new Cooper S Works 210. This is a halfway-house model designed to fit between the regular 192hp S and the 231hp JCW (non-Challenge). It gets some of the JCW’s styling and that car’s naughty exhaust, plus a software update to 210hp, for £22,000. And, having experienced its much more usable performance and engaging manner, it’s hard not to rationalise that it’s the far better road car when held up against its insane Challenge relative.

Nevertheless, the devil in us counters by saying the Works 210 could never, ever hope to thrill its driver in the way a well-hooked-up Challenge could. And this is just us driving the ultimate Mini on rutted Cotswolds roads; it must be absolutely epic on a circuit.

You'll need to be very quick. At the time of writing, Mini UK had just two JCW Challenges of the allocation of 100 left unsold. And the prediction was that last pair would not hang around for more than a few weeks.

This is understandable. We can completely see the appeal of a track-focused, limited-build car like the Challenge – the Volkswagen Golf GTI Clubsport S is a good example of the same thing in the class above – and the Mini is a well-executed take on the formula. But, even in its ‘softest’ settings, it’s a thoroughly hyperactive road-going experience.

The fact is, most drivers are going to be better off optioning up the standard JCW to the hilt and saving money in the process. That, though, would mean missing out on one of the most exhilarating hot hatches around; that’s how brilliant the Challenge is.