We're at BMW's Miramas test facility in France for a very early drive in a prototype version of its new M5, which will go on sale in the UK towards the end of 2017. The cars are camouflaged - inside and out - and the engineers have been briefed to be as vague as possible about most of the car's specification, except for one key aspect: M xDrive. That's right, the new, sixth generation BMW M5 will go four-wheel drive, the first time ever in the history of the nameplate, and something that is certain to cause unrest amongst diehard rear-drive enthusiasts. 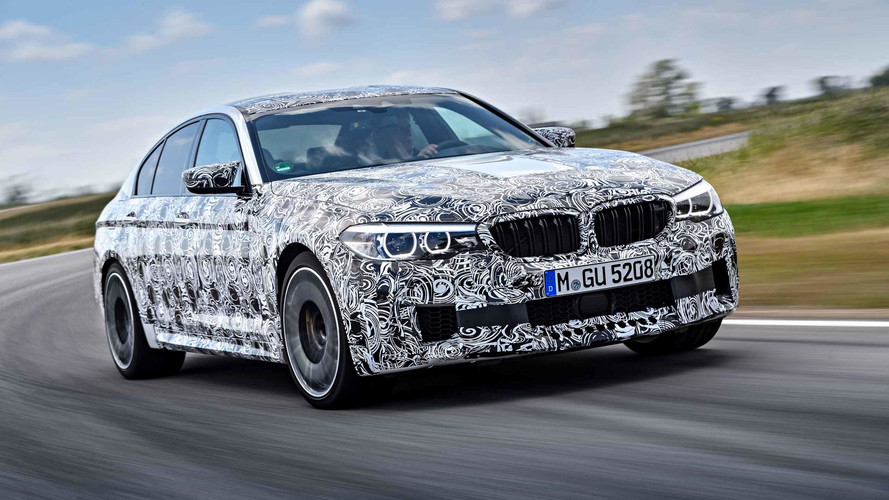 But BMW M knows its customers and is using this track test to reassure them all that the M5 hasn't gone all soft in its old age. After all, competition in the super saloon sphere has never been fiercer, thanks to the launch of the epically good Mercedes-AMG E 63 and the latest generation Porsche Panamera Turbo. Not to mention the ageing, but still ludicrously fast, Audi RS 6 Avant and RS 7 Sportback. To compete, BMW's aims were simple: widen the M5's breadth of capability further than before while enhancing the driving experience for all. No pressure, then.

Until BMW reveals the M5 in full this summer, we can only assume that there's suitably beefed up bodywork underneath the swirly camouflage of our test cars. One engineer did let slip that the roof is carbon fibre, which should look special while lowering weight a tad - and reducing the centre of gravity, too. Indeed, while BMW won't yet disclose such data, another engineer confirmed that the new M5 will be lighter than the old one, despite the fact that it now has a four-wheel-drive system. The savings have mostly been in the body and platform, as this generation of the 5 Series is some 100kg lighter than before across the range. 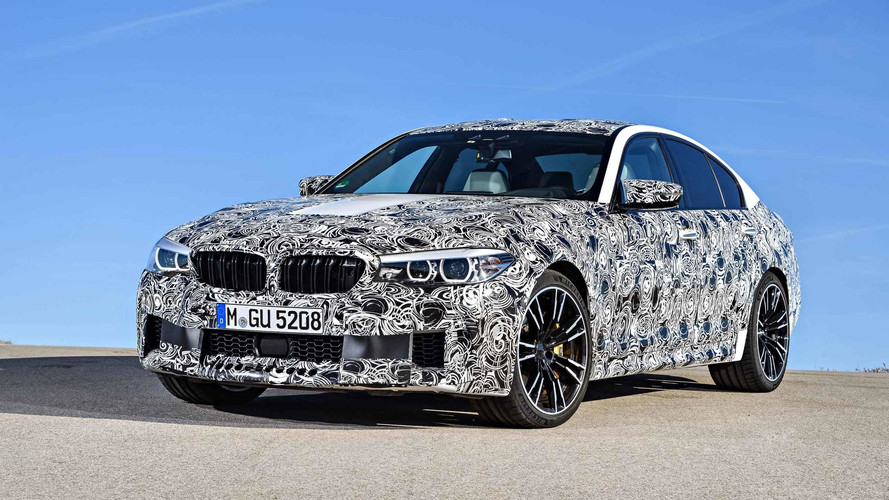 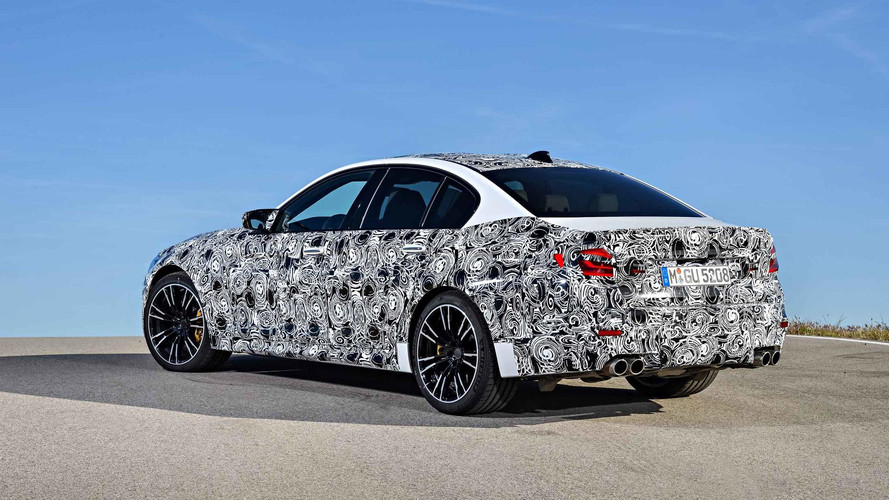 Inside, the M5 builds on the exceptional quality of the current 5 Series with some lovely bespoke features, such as a chunky new gear shifter with an integrated switch for its three Drivelogic modes; a new design of steering wheel with more prominent 'M1' and 'M2' buttons to allow quick selection of custom driving settings; and a tactile "SETUP" button next to that gear lever that opens the relevant menu up on the wide touchscreen above. The seats are figure-hugging M sports items, though we assume there will be a range of options to upgrade those further.

It should be no surprise that the new BMW M5 is fast. While the exact specifications of the powertrain have yet to be revealed, it is known that there's a development of the old M5's twin-turbocharged 4.4-litre V8 engine under the bonnet, making in excess of 600-horsepower. And it feels endlessly rapid on track, easily keeping up with a BMW M4 GTS driven by one of the company's works racing drivers. There's a button to enhance the exhaust noise too, and it sounds suitably senior when pushed to the red line. 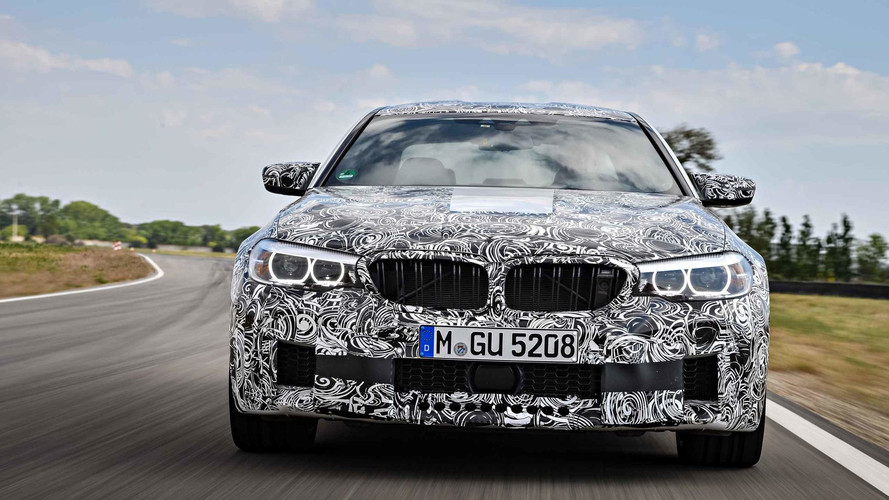 Frank van Meel, BMW M's president, told us that the 0-62mph time is "under 3.5 seconds", which is astounding for a large luxury saloon weighing not far off two tonnes. That off-the-line acceleration is helped by the addition of an eight-speed automatic, in place of the old seven-speed dual-clutch affair, and it's a far more polished transmission at normal speeds, while still giving the driver full control when he wants it.

Naturally, four-wheel drive helps with standing starts too, and to make sure everyone realises it's not quite the same system available across the standard BMW car line-up, it's christened M xDrive here. At its heart is a new control unit that takes responsibility for making sure the differentials, stability control, transmission and four-wheel-drive system play nicely together. It can effectively send 100 per cent of the engine output to one of the rear wheels or to the front axle, in extreme situations, but BMW M is keen to point out that the strategy is always for the M5 to feel like it is a rear-drive car. 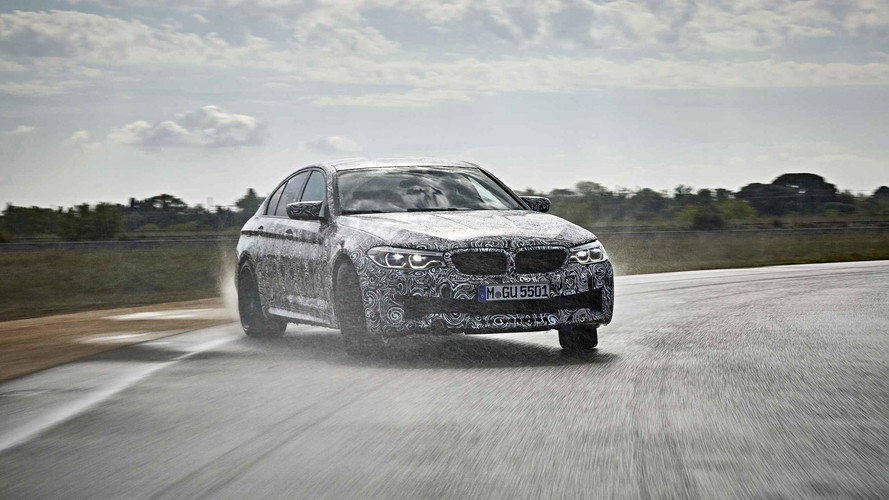 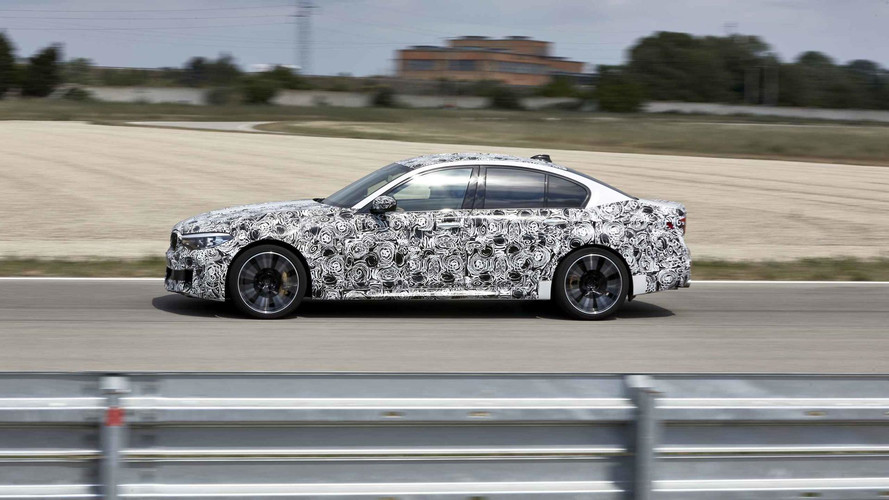 Underlining that are a range of new driving modes to get your head around, along with the usual Comfort, Sport, Sport+, etc. By default, the M5's Dynamic Stability Control (DSC) system is switched on and M xDrive is in '4WD'. In this guise, the car is fast, smooth and very stable, even at high speed on a wet test track. There's no nervousness at all to the controls and if you try to provoke the chassis, the DSC steps in before you notice which end of the car the power is being sent to. Petrolheads may be shaking their heads in disapproval at this stage while they go off to browse the classifieds for 'proper' old M5s, but they need to hang on in there. Before we appease them, it should be noted that this newfound composure is a very good thing. The previous M5 felt twitchy in the wet even in its softest settings, which undoubtedly put some off; the new one eradicates that characteristic. 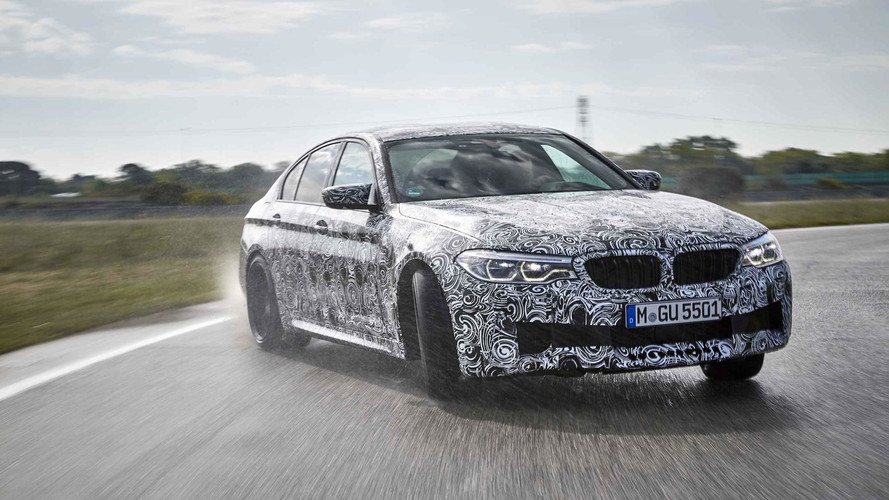 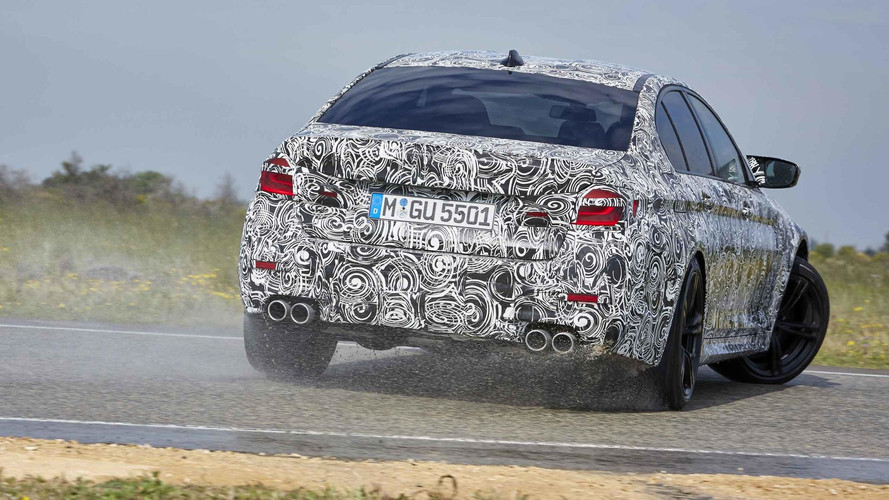 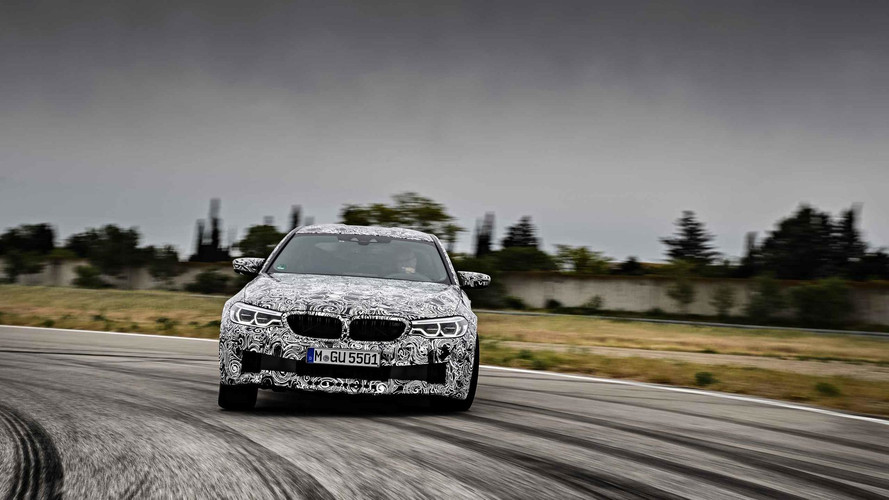 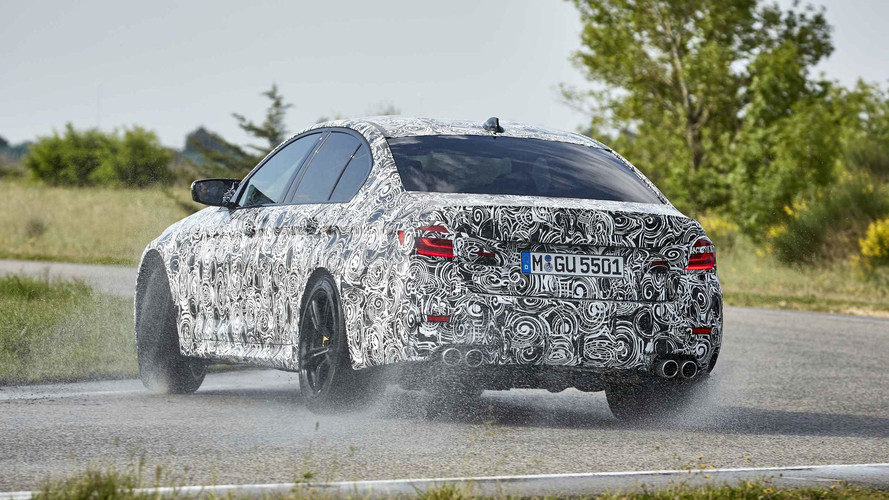 Keener drivers can ramp the excitement up a notch by pressed the DSC button to activate the M Dynamic Mode (MDM). Do that and the '4WD Sport' strategy is put into place and the M5 moves around a lot more before the electronics kick in. There's still no nervousness to proceedings, as the power is gently shuffled to the front axle when needs be, but the M5 exhibits a lovely rear-led stance out of corners that's hugely satisfying. This setting is really suited to quick cross-country driving in all conditions. The multi-mode electrically assisted steering works well, too, and it's more direct than the outgoing car's. 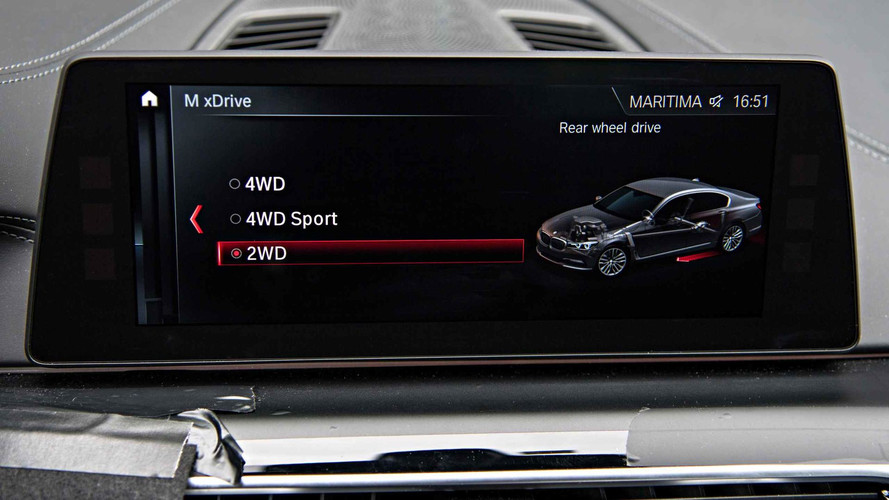 But that's not the end of the M5's talents. You need to hold down the DSC button to unlock its full potential. Do that and you can then choose from 4WD, 4WD Sport and even unfettered 2WD. Testing all of these on a streaming wet handling circuit reveals that the traction control element of the DSC system is all but redundant, as there are masses of grip available. What's more, the new M5 telegraphs its limits to the driver far more readily and clearly than the old car ever did, giving you confidence to push on, regardless of the xDrive settings. So much so that it turns out that the 2WD mode is a complete hoot, allowing you to drift and power slide (on a closed circuit only please folks) at will in a controllable manner. The fanboys will be pleased.

If you're not sure whether to go for the new M5 or the almost-as-new Mercedes-AMG E 63, then it's best you hang fire until you can test the showroom-ready BMW for yourself and compare them, as they really are very similar cars with a very similar technical specification. Can't decide? That's a real first world problem right there and our hearts bleed for you. 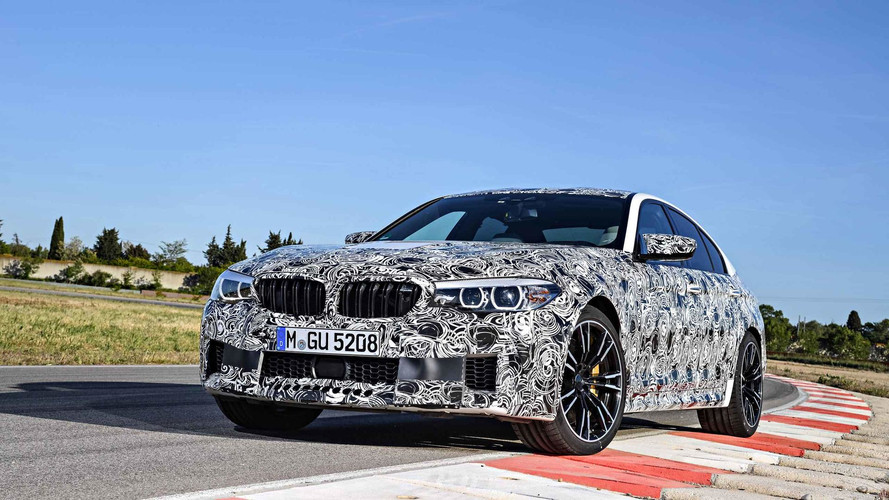 If you do opt for the BMW, it would seem that the M division has delivered on its promise of retaining a rear-drive experience with the added security of four-wheel drive and the M xDrive system makes the new M5 a better and more interesting car than it would have been without it.