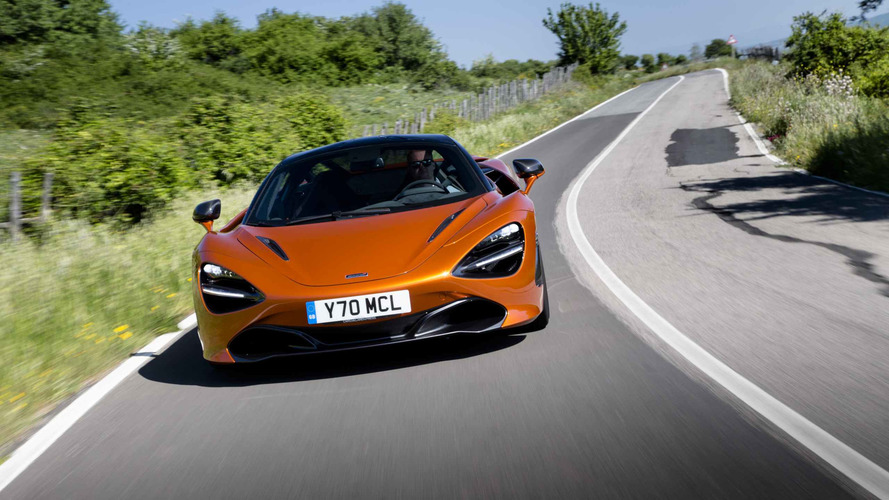 New McLarens seem to be coming thick and fast, the Sports Series range in particular filling up nicely, but above those, the Super Series line-up has been pretty quiet of late. That changed at the Geneva Motor Show this year, where McLaren revealed its new model, the 720S.

The new supercar flagship replaces the 650S and, says McLaren, its limited edition 675LT spin-off - the 720S is actually positioned somewhere in between those two cars.

Both impressed deeply, so the 720S’s task isn’t easy, but McLaren has been on a roll of late, each new model building rather successfully on its predecessor. Looking at the numbers McLaren quotes for the new 720S, it’s difficult not to see that being the case here.

That 720 name gives a none-too-subtle clue as to its output, in hp (710bhp if you’re old school), which comes from a new V8 engine that grows in capacity over its 3.8 predecessor to 4.0 litres. McLaren dubs it the M840T, the T underlining its turbocharged status, and those, like the rest of the engine, are pretty much all-new, sharing very little with the old M838T unit.

Its 720hp doesn’t have a lot of mass to shift, either, McLaren quoting an ultimate, dry weight of 1,283kg, though fill it up with fluids and put a 90 percent fill in the fuel tank and that increases to 1,419kg. That’s still not a lot of weight, especially as the 720hp figure is backed up by 568lb ft of torque, produced at 5,500rpm.

With its roots in Formula One, McLaren’s pace of road car development is extraordinary. It could have been excused for using the 650S’s structure, but the 720S features the new Monocage II, while all the drive systems and chassis systems have been re-thought, redeveloped and essentially replaced for their new application in the 720S.

McLaren’s new supercar is a technical masterpiece, then, with performance that’s nearer the P1 hypercar than its predecessor in reality.

For all the talk of the advanced aerodynamics, the 720S's design initially jarred when the covers were whipped off it. Those headlights have been a talking point since, but judging a car in the artificial light of a motor show never tells the entire story.

In natural light, on the road, it looks spectacular. Very McLaren, and there are hints of all its greatest hits in its form, which is clearly derived as much from aerodynamic necessity as it is the stylist’s flair. The tail is reminiscent of the P1, the flanks have elements of the mighty McLaren F1 and there are even some Sports Series details, too.

Those headlights, or more correctly the apertures that surround them, remain divisive, but in the two days we spent with the car their impact lessened, and their technicality is something that’s pretty core to McLaren’s way of doing things differently.

There’s no denying it’s a colour-sensitive shape, working beautifully in darker or bolder hues, whites and greys, even if metallic finishes don't work quite so well. There’s no shortage of drama, though, from the F1-like opening doors, with their roof cut-outs, to the massive intakes that run the length of the flanks, it’s a visual and material treat.

You can, of course, have it with any amount of additional carbon bits and contrasting stealth trim pieces, or in Luxury spec with some brightwork around the windows. And anything that’s not on the extensive options list can be yours if you speak nicely to the good people at McLaren Special Operations - essentially McLaren’s dream fulfillers, who can, depending on the depth of your pockets, do just about anything you like to it.

While opening the doors and clambering over the sill is a dramatic experience, it’s not so unfamiliar for many supercar customers. What is though is the cabin. It’s clearly an evolution design-wise from the 650S's, so it's not the switchgear, instruments or materials that surprise, but the visibility.

A low scuttle for the windscreen is very much a McLaren signature, visibility out front improved further by the thinness of the pillars thanks to the carbon fibre build. Impressive as that is it’s the view out the back that really surprises, as the rear is almost pillar-less. Glass encompasses most of the rear, to give an IMAX-like view out. It’s genuinely incredible, but it's a bit of a shame then that it’s not better viewed in a wider, smarter, frameless rear-view mirror - a detail you’ll find on many mainstream cars these days.

Elsewhere in the cabin McLaren has improved the operation of the switchgear, working on the feel and finish of its controls, while there’s all manner of new connectivity and telemetry options if you’re intent on taking your 720S to the track and learning how you could go that little bit quicker.

Getting your head around the fact that this is a car that, in all but top speed, is quicker than the McLaren F1, takes some getting used to, particularly as it’s so easy to drive.

That aforementioned visibility helps enormously, as sitting in the 720S is not as daunting as it can be in some mid-engined (or even 'front-mid-engined') rivals thanks to the incredible view out of it. Normal mode has gone from the drive mode selector, so it's now Comfort by default, as McLaren says there’s nothing ‘normal’ about the 720S. Leave it in that Comfort mode and it lives up to its name, the suspension riding the rough tarmac around Rome’s city streets and surrounding countryside with real composure.

It’s firm, but not compromisingly so, though Sport and Track modes add some unwanted frequency through the 720S’s stiff carbon fibre structure. What is notable, over and above the engine’s massive power, is the steering. McLaren steadfastly refuses to shift its thinking on the use of a hydraulically-assisted steering rack, and that’s evidenced by one of the nicest steering systems on any modern supercar. It’s got fine detail, allied to some assured weight, and it's good to hear everyone, from McLaren’s chief test driver Chris Goodwin through to Mark Vinnells, Executive Director, Product Development, admitting that the steering feel and weighting have been an area they’ve obsessed over to get correct.

That, combined with the visibility you’ve got, allows you to place the 720S with absolute confidence; never has a supercar felt so wieldy, even on roads that might be considered more hot-hatch friendly than mid-engined supercar territory. What is evident, even on the road, is the ferocity of the performance on offer. Nothing, this side of a hypercar, accelerates with the enthusiasm of the 720S, and that's not just true when launching from standstill, but through the gears on the move as well. The feeling of a lack of inertia, both in the engine’s response and the perception it’s not having to work hard to shift the car, is hilarious, the 720S hurling itself forward with alacrity that’s got to be experienced to be believed.

That the chassis is so transparent in its feedback and clear in its response only adds to the ability; it doesn't lessen the impact of the 720S’s performance, but allows it to be exploited. The brakes, like the steering, are noteworthy, with race-car like weighting of the pedal, the response immediate, progressive and always assured. Add a transmission that’s so rapid it’ll shift as quickly as the synapses that asked your finger to trigger it, and the 720S is a car that’s devastatingly effective at covering ground quickly.

On a track, with the space to really explore its performance, it’s otherworldly. That it feels as friendly as a modern Lotus to drive, but with rocket ship pace is a huge compliment, McLaren’s tuning of the various driving assist systems simply excellent. An example of that is the variable drift mode, which allows a degree of yaw - to your chosen angle - before it helps out, so the McLaren flatters you, helps you, yet all the while it's engaging and hugely entertaining. The speed it will carry is ludicrous, enough to have P1 customers wondering why they spent all that money on their hybrid hypercars, some might say.

If you’re sensing a 'but', you’d be right. There’s no denying that the 720S’s breadth of ability is deeply impressive, but during our introduction to it McLaren admitted it had focused hard on refinement. And it clearly has, to the point that, in Comfort mode, the engine’s so muted it’s all but silent; there no occasional crackle or flair from the exhaust on downshifts, even with the Sports Exhaust, which also adds in the 'Intake Sound Generator'. The noise does admittedly change as you move up through the modes, but even so it’s a bit too reserved, particularly in comparison to its Italian rivals.

McLaren claims a lot of its Super Series owners use their cars every day, which is admirable, but even if that’s the case, we’re sure they’d like an occasional reminder that they’re driving something exotic, even if it has to be synthetically added - the 720S sounds far better from the outside, than in. An exhaust mode button would be to its enormous benefit, allowing Comfort settings for road use, but some accompanying sounds to make those daily drives a little bit more memorable aurally.

It seems like many of you already have, as McLaren is not short of people waving their chequebooks at their salespeople from the day the 720S was unveiled. If you want one now you’ll be in for a wait, unless you can persuade someone to give up their early car for a small premium.

If you want a supercar that can do anything then the 720S very much fills the brief, its range of ability, ridiculous performance yet ease of use is pretty much unparalleled in the world of supercars. We just wish that, for all the engine’s mighty performance, it was a bit more charismatic of voice, which isn’t something that’d be too tricky to sort out. If McLaren could do that it’d be knocking on perfection.