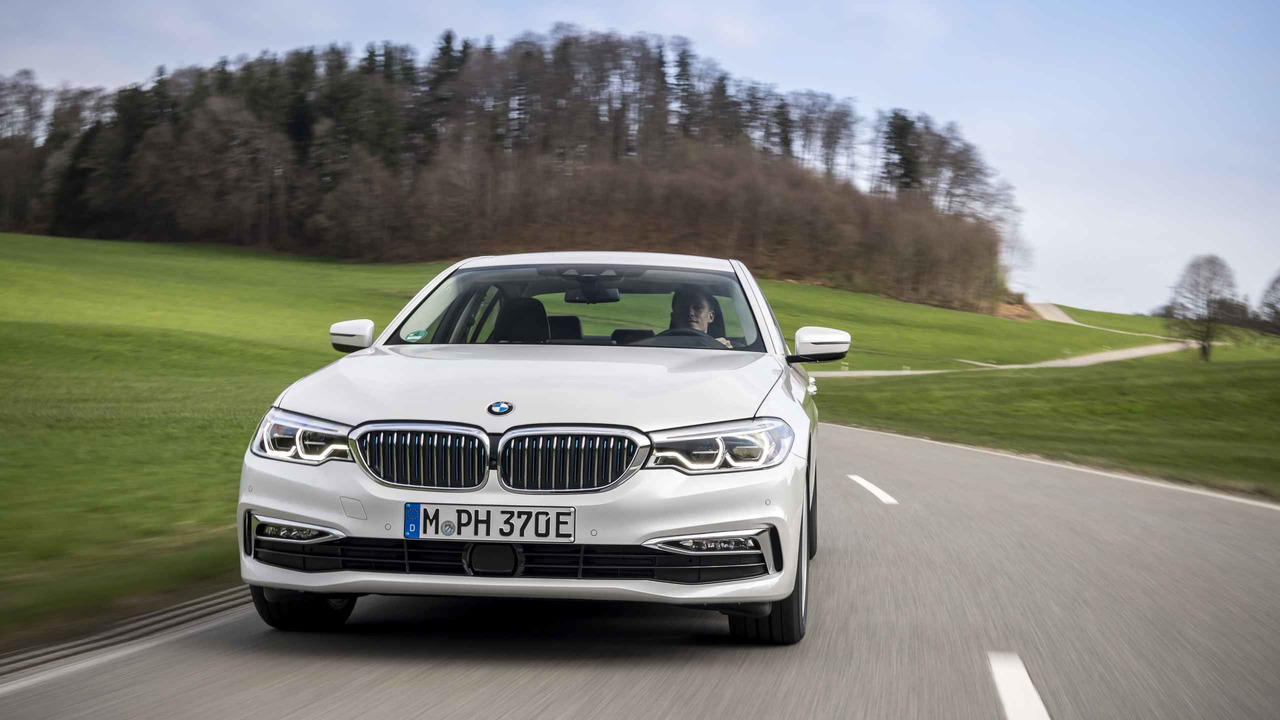 BMW’s 5 Series goes plug-in and is exceptionally refined to drive.

The 530e iPerformance plugin hybrid is the sixth such model launched by BMW (if you count the currently China-only X1 25e) and it’s part of the company’s push to becoming the biggest seller of electric and part-electric cars in the world. The idea of the iPerformance badge (which confusingly doesn’t actually appear on the car — there’s an eDrive badge on the rear pillar instead) is to be to BMW’s i-car range what the M Performance brand is to full-on M cars. So this is electric, but not fully electric.

You can just about tell it apart from other versions of the 5 Series by the small wheels (which do look a touch lost in the arches) and the blue highlights in the radiator grille and around the badges. The extra flap for the charging socket, behind the left front wheelarch, is also a giveaway.

BMW is deadly serious about the sales prospect for this car. So far, 130,000 electric or part-electric BMWs have been sold, worldwide. The 530e is expected to push that figure up to 100,000 this year alone. With diesel-phobia setting in, it just might manage that.

You can rightly think of the 530e as the bigger brother to the existing 330e and it uses effectively the same drivetrain. It is propelled by a 184hp 2.0-litre turbocharged four-cylinder petrol engine, combined with a 95hp electric motor for a combined system total of 252hp, or about the same as provided by the petrol-only 530i. The official economy and emissions figures are fantastic, in the literal sense of the word. BMW says that it will return 141.2mpg, with emissions of just 46g/km. Plug the 530e in and in around three hours (depending on your power feed) you’ll have charged up the 9.2kWh battery, which can drive you for a claimed 31 miles at speeds of up to 87mph.

Inside, it’s the same as any other new 5 Series, bar the extra button on the centre console that toggles between Max eDrive mode (fully electric), Auto eDrive (which shuffles between petrol and battery power) and Battery Control (which allows you to save or charge the battery as you drive). It’s a spacious, welcoming cabin with terrific quality and great front seats. Boot space is reduced compared to the standard model though, dropping to 410 litres thanks to the packaging of the battery stack and fuel tank. As with the 330e, there’s no Touring estate version in the offing.

Equipment, aside from the extra components for the hybrid system, is in line with the rest of the 5 Series range, so you get the new version of iDrive (with a touchscreen as well as the familiar rotary controller), the BMW Connected suite of apps and smartphone connectivity (which includes a mobile version of Microsoft Office), and high-end safety systems such as radar cruise control, lane keeping and more.

The theory is, of course, that you plug your 530e in and, if you’re doing short journeys most of the time, the fuel in your tank will go stale before you ever have to actually burn any. Polar bears will love you and Al Gore will give you some sort of medal.

The execution is, of course, a little different. For what it’s worth, we zeroed the car’s trip with 20 miles of battery range showing from a partially-charged battery, in ambient temperatures close to freezing (which has both a physical effect on battery performance and also drains the battery faster because we were heating the inside of the car). Driving normally (sticking to speed limits, but neither were we driving excessively slowly) we teased 18.9 miles out of the battery without ever bothering the petrol engine. The remaining portion of our 70-mile test route was covered in hybrid mode, mixing both electric and petrol power, and we reached our destination with recorded fuel economy of 48.7mpg. A long way from 141mpg, certainly, but probably better than we’d have achieved from a petrol-only 530i and not far of a 520d diesel.

BMW describes the car as being designed for commuters and urban dwellers and, fair enough, if you live and mostly drive in town, you will probably average much better miles per gallon, as long as you remember to plug it in at every opportunity (which BMW is helping with by developing a wireless induction charging plate for your driveway, which goes on sale next year). As with any plugin hybrid, you have to be slightly committed to the concept to get the best out of it, but there is always the danger that many will buy one for the potential tax advantages and never take it near a plug.

Either way, it still feels like a 5 Series to drive, which is a relief after the odd steering and flat-footed feeling of the plugin hybrid X5. The steering in the 530e is light, a touch detached, but very accurate and reassuringly steady on tight and twisty roads. There is a faint hint of extra body roll, and a sense that the suspension is working hard to keep the extra mass of the batteries in check, but the ride quality, helped no doubt by the combo of small wheels and  high-profile tyres, is exceptionally smooth. Which is a good description of the driving experience as a whole. Aside from an occasionally intrusive four-cylinder engine rasp, the 530e is remarkably refined and cosseting to drive, one of the most relaxing cars we’ve driven for a time. Conversation in the cabin at 60mph never needs to rise much above a murmur and the build quality is exceptional — in spite of the silence, we never detected a creak or squeak.

When you forget about trying to save fuel, performance is quite lively. The benchmark 62mph comes up in 6.2 seconds, which is sufficiently brisk, and thanks to the eBoost function (which adds electric power for snap acceleration) it has genuinely impressive performance. The eight-speed ZF automatic gearbox also helps — because the electric motor is mounted between it and the engine, the eight gears also work in electric-only mode, so the whole powertrain feels much more satisfying than those with a droning CVT.

As with all plugin hybrids and electric cars, much depends on your lifestyle and your driving habits as to whether or not you should buy a 530e. Do you live in town, or at least in the suburbs? Do you mostly drive for short 20-mile journeys in each direction (as BMW says its research shows most hybrid buyers do)? Are you tech-happy enough to consistently plug the car in every time you pull up, even when the rain is sheeting down?

Then by all means buy a 530e — it’s exceptionally comfortable, refined, and relaxing, and if you make the most of the batteries, has the potential to be exceptionally economical and cheap to run. If you spend your days pounding up and down the motorway, then just buy a 520d.