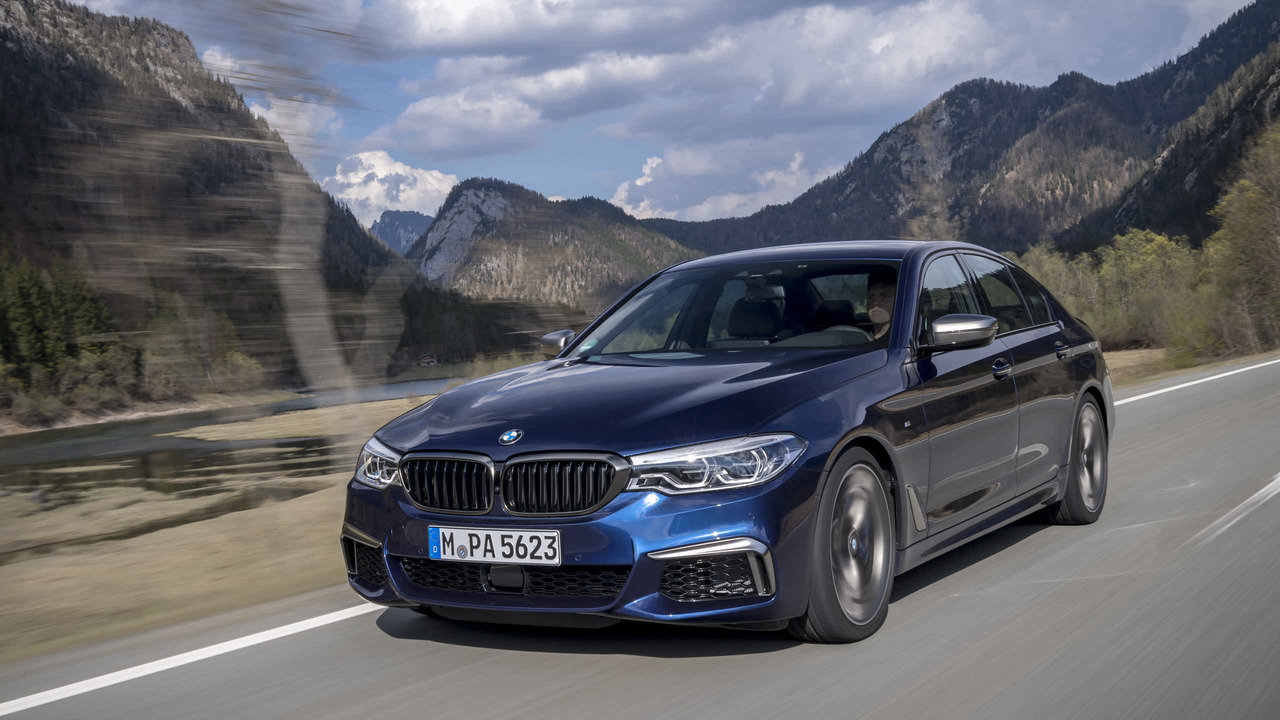 BMW’s M5-lite is actually quicker than the old M5, and wonderfully refined too.

For all those who remember the BMW M535i from the mid-eighties, the new M550i xDrive will need no explanation. For those not quite old enough to remember, the idea is of having a car that’s almost, but not quite, as fast and as hard-core as a full-on M car, but close enough for government work, so to speak. It’s an idea BMW has revived for its M Performance brand, which offer impressive acceleration and handling, but does not deliver quite the final, feral M car experience.

The M550i is the first 5 Series model in the current M Performance range and will shortly be joined by a diesel-fuelled quad-turbo M550d. Alas, rather sadly, no right-hand-drive production is being planned at the moment.

The M550i looks mean, but perhaps not excessively so. There is an M Aerodynamic body kit with a deliciously subtle gurney flap boot lid spoiler and standard 19-inch alloy wheels. Inside, it’s basically the same as any high-spec new-shape 'G30' 5 Series, so you get great seats, great build quality, and just a faint whiff of not enough difference between it and other BMW models. Nice electronic dials though, which are model-specific for the M550i. Space and comfort are both very good, and there’s a 530-litre boot, so as high performance cars go, this one is pretty practical.

There’s a new version of the familiar iDrive system for the 5 Series, which still uses the classic click wheel, but also now comes with a touchscreen. To be honest, the screen is a little too far away for comfort, but it’s nice to have it, we suppose.

It comes only with xDrive four-wheel drive, which is biased towards the rear wheels, and the M Adaptive suspension, with its electronically controlled dampers and anti-roll bars, sits 10mm closer to the tarmac than that of a standard 5 Series. There’s also standard Active Steering, which changes the ratio of the steering rack depending on the speed of the car, allowing you to turn more tightly at low speeds with minimal effort. BMW says that rear-wheel steering has also been developed for the M550i, but that was not an option fitted to our test car.

The usual eight-speed ZF automatic gearbox is also standard, and while BMW isn’t bringing the car to the UK it should be usefully more affordable than the new M5, which arrives within the year.

What the M550i feels most like is a multi-role fighter jet. The kind of aircraft that’s happy to perform any menial task asked of it but which can light the ‘burners and launch towards the edge of the atmosphere at the moment of asking.

The engine is BMW’s 4.4-litre twin-turbo V8, using both Valvetronic (which varies the valve lift) and Double Vanos (which alters the camshaft timing on intake ad exhaust). With 462hp it’s around 100hp down on the outgoing M5, but the 650Nm of torque is a senior figure and thanks to that, and the standard xDrive, it will actually beat an old M5 to the 62mph mark, 4.0 seconds playing the old car’s 4.3 seconds (but around the same time as the limited edition M5 30 Jahre model).

The V8 makes a delightful, deep, bass-rich rumble when you start it up, but it’s not like an old American muscle car V8. The bass is overlaid with the unmistakable metallic thrash of a German high performance engine and as the revs build that’s the noise that takes over, building to an epic gnashing sound as you head for the 6000rpm power peak. The M550i builds speed like a steam-train on a long, downhill grade, easily overrunning its supposed 155mph speed limiter on the briefest of Autobahn clear stretches. Junior M car it might be, but it has the sheer performance guts to bother the big boys.

It has the handling too, although that’s a judgement slightly clouded by the fact our drive was conducted on winter tyres, which were obviously holding the chassis back a little. Mind you, we were happy for their ministrations when it came to cold, slippery, wet corners. Even with xDrive it’s possible to coax the back end of the M550i into travelling faster than the front, but for the most part it sits flat and stable and is remarkably biddable for such a powerful car — more so than the old M5 ever was.

It’s also surprisingly soft. While you can switch between the usual Comfort, Eco Pro, Sport, and Sport Plus modes, we mostly left it in a new setting — Adaptive — which adjusts the suspension, steering, throttle response etc. according to how you drive. It’s this mode that reveals the M550i for the multi-role hero that it is, allowing a surprising (but not unwelcome) degree of suspension softness that makes tackling country back roads much more pleasant than it would be in a more stiffly-sprung car. The steering, in spite of the adaptive rack, has a wonderful linearity to it, and it’s beautifully weighted, but, alas, pretty much free from proper road feel. Tip along gently in the M550i and you could be in the most luxurious car you’ve ever driven — it’s quiet, refined, and very relaxing.

Nudge the throttle pedal down, though, and it starts hauling hard for the horizon. It’s massively entertaining, especially aurally, but the softness does mean that sudden direction changes can make it feel a touch wayward if you try and tackle them too quickly. It’s hard, very hard in fact, not to come away from this feeling very impressed.

Well, you can’t — unless you fancy personally importing a left-hand-drive one, but the fact is that it’s a shame BMW isn’t bringing this car to the UK. It may not be the full M experience (and a new M5 is waiting, hungrily, in the wings), but it’s a massively impressive car, capable of serious speed and serious cornering, but with the kind of softer edges that make it much more appealing as an everyday car.