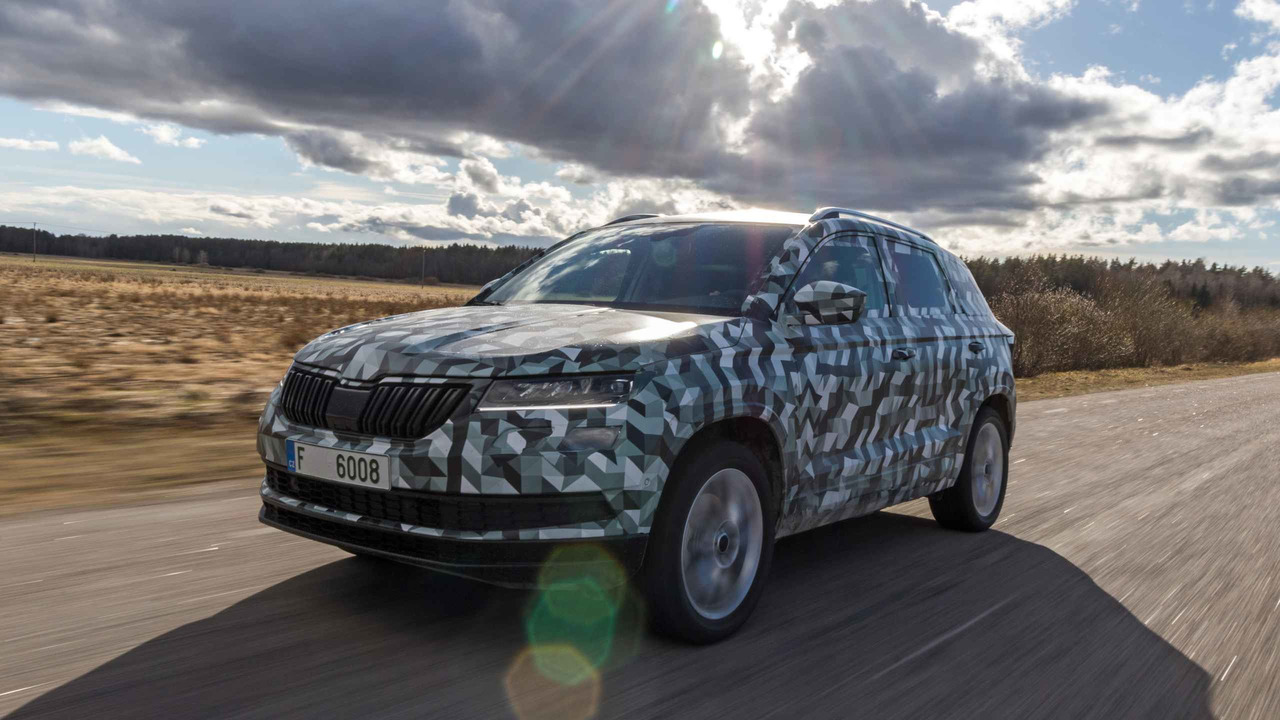 The Skoda Karoq looks set to shake up the compact SUV market.

An early taste of the new Skoda Karoq in pre-production prototype form indicates that the Czech car maker could be on the verge of setting a new benchmark for the compact SUV segment. The what? Its all-new five-seat compact crossover with a similar appearance to the larger Skoda Kodiaq, that's what.

The styling of the front, although analogous to the more substantial Kodiaq, is just that bit softer, but we expect this car to still divide opinion when the finished product debuts later this month. Considering its relatively compact dimensions (overall length of 4,382mm and height of 1,605mm), it is impressive how well Skoda’s design team has packaged everything. Not only does it have some of the best-in-class cabin space, it still manages to accommodate a luggage capacity of 521 litres.

While we’ve come to expect interior space and practicality from Skoda, it is the company’s ever-improving refinement in its cars that continues to impress. Karoq buyers will have a choice of two petrol and two diesel engines when it is launched, and Skoda will also offer front- and four-wheel drive transmissions. Shortly after launch the addition of Dynamic Chassis Control (DCC), with adaptive dampers, will become available.

When you climb inside the cabin, you are met by a comfortable driving position that is helped by newly-designed and supportive front seats with a broad scope of adjustability. The new 9.2-inch high-definition infotainment screen in the centre console immediately catches your eye. It is an impressive bit of hardware that reacts instantly to inputs and even features gesture control. This allows you to swipe your hand in front of the display to scroll through different menus or listings, which is a bit gimmicky in reality, but still kind of cool, right?

The advanced look doesn’t stop there, as Skoda has equipped the Karoq with the same 12.3-inch digital instrument display that has already appeared in various Audi and Volkswagen models. Skoda has created a unique look with how it has styled its many screen options, though, and it's an attractive addition.

Rear passenger space is equally noteworthy, with impressive amounts of headroom and legroom for a car in this segment. Even with the glass panoramic sunroof, which is available as an option, there remains enough height not to trouble even the tallest of passengers heads.

Another great trick Skoda has in its arsenal of practical items is the VarioFlex rear seating system. Taking the place of the standard 60:40 rear bench seat, this comprises of three individual chairs, all of which can be easily and quickly removed. With all three taken out, the cargo capacity becomes a van-like 1,810 litres, but the best feature is when you remove the middle seat. Doing so then allows the remaining outer seats to slide inwards, increasing elbow room. Both of these outer seats are ISOFIX equipped and can be heated electrically regardless of position.

Skoda has clearly spent a considerable amount of time in fine-tuning its suspension setup to give the Karoq a ride quality that, even on standard suspension, enables it to absorb the big bumps easily without losing composure in the corners. It closely matches its relation, the Volkswagen Tiguan, for ride comfort, too. When the adaptive damper system in introduced, it should perform even better, allowing the driver to choose their preferred setting.

The 2.0-litre TDI diesel engine will feature in 150- and 190-horsepower forms, though the latter is matched exclusively with the seven-speed DSG automatic and four-wheel-drive transmission. It is the 150hp diesel engine that may prove to be the most popular amongst British buyers given its useful 251lb ft of torque and official 55.3mpg in DSG 4x4 form.

While the engine’s performance was expectedly good, it is the cabin’s insulation from sound and vibration that was particularly impressive. The good torque output helps to keep engine speeds lower and, combined with more sound deadening material and acoustically optimised glazing, the Karoq feels more premium than the Yeti ever did. This is also taking into account that our cars were equipped with winter tyres, which would typically increase noise within the cabin.

There are a number of different drive modes that can be selected to suit the task at hand, including Eco, Sport and Individual, in addition to the Normal default setting. Four-wheel drive models also get a dedicated Off-Road setting. This feature is designed for venturing off the beaten track, and it changes numerous parameters: throttle response is dulled to help drivers smoothly apply minute amounts of power, while driver assistance systems like Hill Descent Control optimise the car for low-grip terrain.

Back on the road, we found the new 1.5-litre TSI petrol engine just as impressive. Again, it was equipped with the seven-speed DSG and four-wheel-drive transmission. There was an even greater sense of refinement in the cabin due to the inherent quietness of petrol power too. It produces the same 150hp as the 2.0-litre TDI and less torque at 184lb ft. It revs freely and makes the Karoq feel more agile, too, no doubt due to the reduced weight over the front axle.

One of the headline features of the 1.5-litre TSI engine is Active Cylinder Technology (ACT). When the car is cruising or the engine is not under any significant load the system can shut down two of the four cylinders. As soon as the throttle is pushed, these two cylinders fire back into action without any perceptible change to the driver. It works seamlessly and according to Skoda can add up to 5.2mpg on a journey. The official combined economy figure for this engine is 54.3mpg.

If you want a compact SUV that is highly practical yet enjoyable to drive and has the latest in-car technology on-board, then the answer is a definitive yes. The only unknown is the pricing, but we don't expect it to dramatically increase from that of the outgoing Skoda Yeti.

With so many compact SUVs on sale currently, the new Skoda faces no lack of rivals, but few are likely to truly give the Karoq a close run for its money when it goes on sale towards the end of 2017. Its handling and performance, along with functionality and space inside, give it a real chance of becoming the new benchmark for the segment.