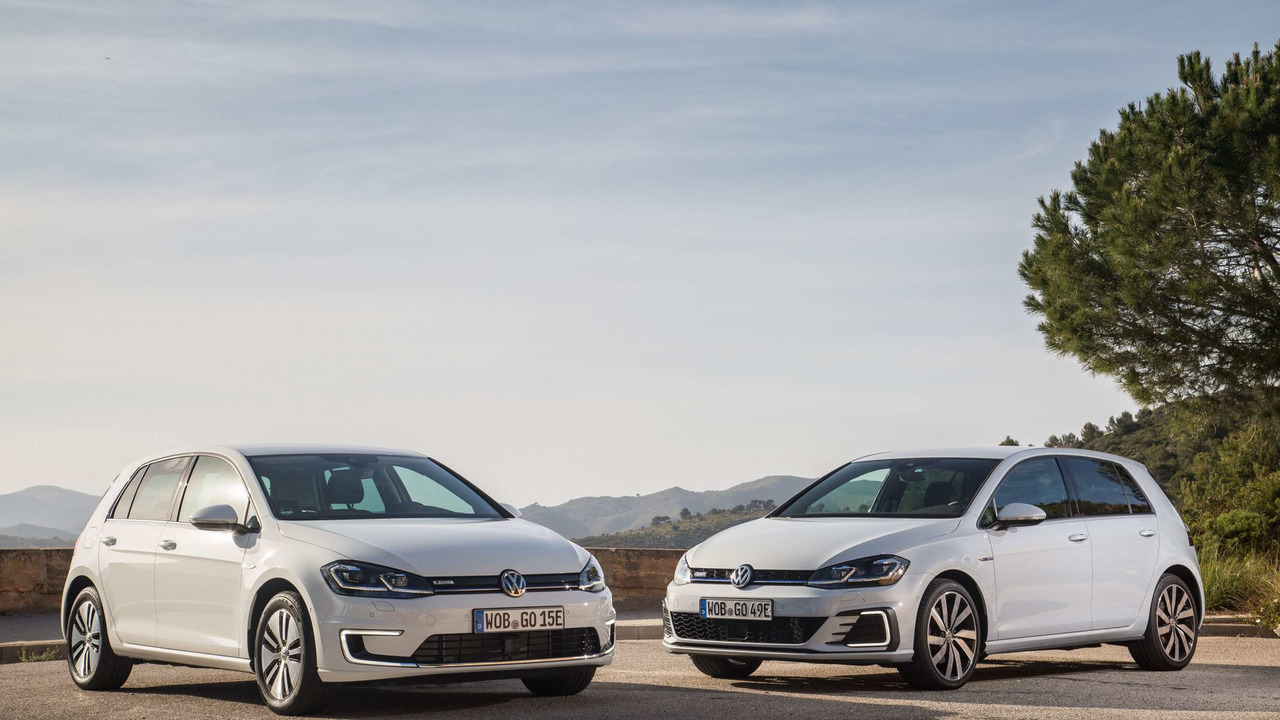 Volkswagen is in the midst of rolling out its entire range of updated Golfs and can continue to lay claim to being the only car maker that offers petrol, diesel, electric and plug-in hybrid versions of the same base car. Here we focus on the latter two, called the e-Golf and GTE respectively.

Other than the updated appearance and roll out of further safety and infotainment technology (as in the whole Golf line-up), the GTE is differentiated from its predecessor only by its new 'predictive' hybrid strategy, which uses mapping data from the satnav to alter the driving modes. Of more interest, perhaps, is the huge price drop, which makes the updated GTE a significant £3,420 cheaper than before (at £29,980 for the entry-level model of two), though it's still a little too close to Golf R pricing for comfort.

The e-Golf, as before, qualifies for the full £4,500 electric car grant, which brings its price down to a more palatable £27,000 or so (exact pricing has yet to be confirmed). Not only that, but the e-Golf is arguably the most updated of all the new Golfs thanks to a much longer range between charges and more power - plus of course all the other styling and technology upgrades.

Need to show your mates that you can differentiate the new Golf from the old one? Take a good long hard look at the lights. All models get full LED rear lamps, while the e-Golf and GTE (and the GTI and R models) gain distinctive all-LED headlights and natty 'animated' rear indicators, too. The electrified cars driven here, the e-Golf and GTE, are further distinguished by use of a blue line in the grille that extends into the headlamps themselves. Both get C-shaped daytime running light graphics, though the GTE's new front bumper is more like the Golf GTI's in its aggressiveness, which we like, and it gets twin exhaust outlets on the left of the new rear bumper, where, obviously, the all-electric e-Golf has none.

Before we get to the new stuff, it's worth reiterating that the Golf GTE's boot is considerably smaller than that of the rest of the range as its battery pack takes up space, while the e-Golf's is also a little less spacious, but not to the same extent. Elsewhere, the GTE mimics the Golf GTI's cabin in ways, as before, with a chunky flat-bottomed steering wheel and sports seats, though the red stitching and detailing is replaced by blue. The e-Golf's cabin is more subdued, but uses the same grey and blue colour theme.

While all versions of the updated Golf receive updated touchscreen infotainment, only the e-Golf gets the top dog system as standard. It's called Discover Navigation Pro and it's based around a lovely reactive 9.2-inch touchscreen (the GTE has a less snazzy system and an 8.0-inch screen) and a 64GB SSD hard drive. This also features gesture control, which will certainly wow buyers in the showroom and your kids alike, but we reckon it's no quicker or easier than using either voice control or the buttons on the steering wheel. Within that system, though, is a considerable update to 'connected' status for the e-Golf and GTE thanks to Volkswagen's Car-Net functionality. Oddly, the all-digital instrumentation ('Active Info Display' in Volkswagen speak) is a £495 option in the e-Golf, but standard on both regular and Advance versions of the GTE. The latter adds a few niceties, such as more Car-Net functions and even a selectable 'e-sound' external noise generator to warn pedestrians of your presence when running on battery power alone.

It's worth mentioning that, while most of the Golf's cabin is unchanged, it remains the benchmark in terms of quality and refinement in the mass market and does a good job of challenging the premium alternatives above, such as the Audi A3, BMW 1 Series and Mercedes A-Class.

Not radically different to before pretty much sums it up. To refresh your memory, the GTE features a turbocharged 1.4-litre TSI petrol engine up front, bolted to a six-speed DSG automatic transmission. Within that is a compact electric motor, which is powered by a large lithium-ion battery pack mounted ahead of the rear wheels. Maximum system power is a useful 204-horsepower, while there's up to 258lb ft of torque on tap if both the engine and electric motor work together. On the road, it doesn't feel quite as fast as those figures suggest it will do, mainly because it's heavy, weighing in at exactly 200kg heavier than the equivalent DSG-equipped Golf GTI. That blunts performance a tad, though in comparison to any regular Golf in the line-up it's pleasantly quick. Thing is, to get the full effect, you need to really plant the throttle, and the engine sounds strained when you do that. Push the 'GTE' button and a sound symposer does its best to impersonate the sporting sounds a Golf GTI can emit while making the car feel at its most alert, but it all feels as if it's trying too hard to be what it's not.

Likewise, the chassis is not a patch on that of the GTI. That's hardly surprising given the higher ride height and increased mass, and if there was any other badge on the boot other than GTE, we wouldn't even consider comparing it to the performance model. In short, that badge writes cheques that the GTE can't really cash with any conviction. Indeed, the car feels much more at home when ambling about, running on electricity whenever its battery level allows (up to 30-odd miles apparently) and dealing with urban driving in an efficient manner.

Obviously, that's the natural habitat for the e-Golf too, and it's exceptionally refined, more so than the GTE when it's running on electricity, actually. As there are no sporting pretensions, Volkswagen has softened off the springs and dampers, fitted squishy tyres with a nice tall cushioning sidewall and isolated the cabin from all the noises. It's a genuinely serene car to waft along in. But thanks to a new, higher energy density battery and more powerful electric motor, the e-Golf is more suited to life away from the city limits than ever before. On the mythical NEDC test cycle it will apparently eke out nearly 190 miles from a full charge, though Volkswagen also suggests that closer to 120 miles is more realistic for most drivers. Still, that's a considerable improvement on the old car and should help increase sales.

And that's not the only reason to like the e-Golf. The 136hp electric motor produces its full 214lb ft of torque from a standstill so it feels remarkably nippy away from traffic lights and when exiting junctions. So much so that it can quickly spin a wheel before the traction control system promptly steps in if you're a bit lead-footed. Once up to speed, this sensation is lessened. The e-Golf exceeds expectations in the corners, such is its composure, but it's not a car you'll relish to drive down a good B-road. Instead, it majors on comfort and refinement. To that end, the power assisted steering is overly light and free from feedback, as well.

Fun can be had in a different way, where you slot the transmission lever into 'B'. This significantly increases the regenerative braking effect, meaning you can, with a little practise, barely use the brake pedal itself as you learn when to ease off the throttle and allow the electricity generating function of the motor slow the car, all the while knowing that it is charging up the battery at the same time.

We're slow to recommend the Golf GTE, in honesty, certainly while diesel power is still available. Even after its price reduction it's costlier than the GTI, and while it clearly can be highly efficient in certain circumstances, it remains a niche market for now, especially as it doesn't really pull off the 'plugin GTI' role convincingly.

The e-Golf, however, is a different matter. The extended range makes it a viable choice for a much wider swathe of motorists, it's loaded with high-tech equipment, it's the most comfortable and civilised Golf you can buy and, bearing all that in mind, it really isn't badly priced. If your commute is modest and you have access to another vehicle for occasional long journeys, it really is worth considering. And at the end of the day, it looks and feels like a brand new Golf. What's not to like?