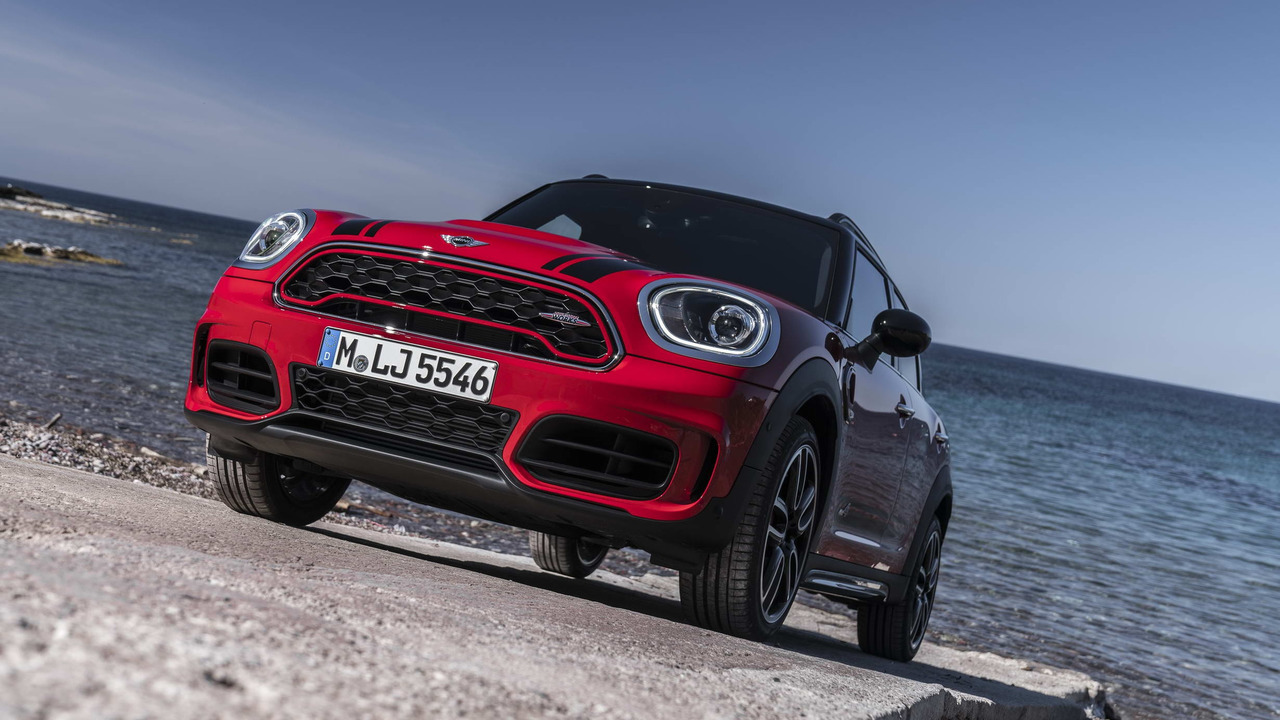 The Countryman is Mini’s largest car to date (growing by 19cm in length and 3cm in width over the previous model), which means the new John Cooper Works (JCW) model must be its largest hot hatch ever. Its 2.0-litre turbocharged four-cylinder petrol engine produces 231hp, which is well above the 192hp Countryman Cooper S. The JCW also gets further suspension tweaks to improve the handling to help it deal with all that power. Whether you choose the six-speed manual or eight-speed automatic transmission we’ve tested here, you will also get Mini’s ALL4 all-wheel-drive system fitted as standard.

There isn’t a trade-off between performance and practicality either, as the JCW Countryman still offers generous space for five passengers and a useful amount of boot space. As with all Minis, there are still plenty of exterior and interior personalisation options to spend your cash on.

You won’t need to be a Mini aficionado to spot the visual differences that mark out the John Cooper Works Countryman. It sits on bespoke 18-inch alloy wheels that fill out the arches a bit better than even the sporty looking Cooper S models do. Behind these sit red Brembo brake callipers bearing the John Cooper Works logo. Meanwhile, the front bumper drops the fog lights in favour of larger air intakes to help aid cooling and improve aerodynamics.

John Cooper Works badging on the side wing vents and on the front grille, which includes a red inner frame surround, highlight that this is no ordinary Countryman. Black side sills and roof rails help reduce the visual bulk of the car, too. From behind, the styling is almost identical to that of the Cooper S Countryman models apart from a more aggressively styled diffuser. Two exhaust outlets add symmetry. Despite the visual enhancements that beef up its image, the John Cooper Works version retains the same overall dimensions as the regular Countryman.

When you sit in the cabin it feels a bit more special, with two-tone sports seats featuring Alcantara inserts for a start. Red stitching on the sports steering wheel, gear selector and boot all serve to remind you that you’re in Mini’s sportiest Countryman. The look and finish are to a high standard as you might expect from Mini and new features such as the touchscreen satnav and infotainment screen all add to the premium feel inside. There is also the choice of an optional head-up display, which, as well as being clear and easy to read, can change its view according to the chosen drive mode.

Increased versatility complements the roomy passenger space. The Countryman features three ISOFIX points, including one in the front passenger seat. Meanwhile, the rear seats can slide fore and aft up to 13cm, as well as recline, and they can be tumbled forward in a 40:20:40 split to boost cargo capacity from 450 litres to 1,390 litres.

Flick the rotary driving mode controller around the base of the gear selector into Sport, and the JCW Countryman starts to come alive. A little butterfly valve in the exhaust opens, and the on-board sound symposer boosts the engine sound giving it a more bass-heavy tone. Sure it’s a bit fake, but it works. The turbocharged 2.0-litre engine delivers enough torque low down to give the car plenty of performance at lower speeds. It pulls strongly, and engine speeds rise quickly enough to see the automatic transmission quickly grab gears, signalled by a lovely crack from the exhaust with each shift. You can leave it in full auto mode or use the steering wheel-mounted paddle shifters.

You sit more forward than in some crossovers, and this helps to give a reasonably open field of vision, which can be especially helpful when you’re clipping along on your favourite B-road. Lifting off the throttle when in Sport mode creates pops and crackles on the overrun from the exhaust that will have you grinning.

Push-on a bit harder and the JCW Countryman shows just how capable the chassis and ALL4 four-wheel-drive system are. It hangs on through tighter bends impressively well. The reworked suspension does a great job of hiding the car’s mass, too. You’re always aware of it, but weight transfer forward to back or laterally isn’t an issue here. The suspension is firmer than in other models, but a good damper setup prevents the ride from being too jarring.

When grip at the front does start to run out, the ALL4 system can shift power to the rear axle in a near-seamless fashion. The security provided by the ALL4 system allows you to carry impressive speed through corners, and even tightening radius bends do little to unsettle the Countryman's composure. The steering doesn’t quite rival the smaller Mini Hatch's for sharpness, but it's certainly more direct than the average crossover's.

The four-piston Brembo brake callipers up front help to scrub off speed at an impressive rate. Over a prolonged stint of harder driving on mountainous switchback-strewn roads they showed little in the way of fading. Throughout the pedal movement there is a good degree of modulation, even right down to the final couple of millimetres of travel, which gives the driver confidence.

More enthusiastic driving does cause the fuel consumption to suffer, obviously. Drive it hard and you should expect late-teens to low-twenties in the mpg stakes to be a common sight. Drop back into the Mid or Green mode and things do settle down and improve. In fact, in either of these drive modes the car is very docile. In traffic, the start-stop system is quick to react, while the more muted engine tone adds to the relaxed driving experience. This is certainly the most entertaining version of the Countryman, yet one that suits a variety of situations.

If you already own a hot hatch and need something more practical, but don’t want to miss out on the thrill of that Sunday morning B-road blast, then this car will certainly tick a lot of boxes for you. Crossovers are in great abundance in today’s market, but performance-based versions like the Mini John Cooper Works Countryman aren’t.

In fact, this car is almost unique in the segment given its performance capabilities. It still does all the practical stuff very well, with good interior space for passengers and luggage and the bonus is that when you want to have some real fun it delivers rather well on the performance front, too.