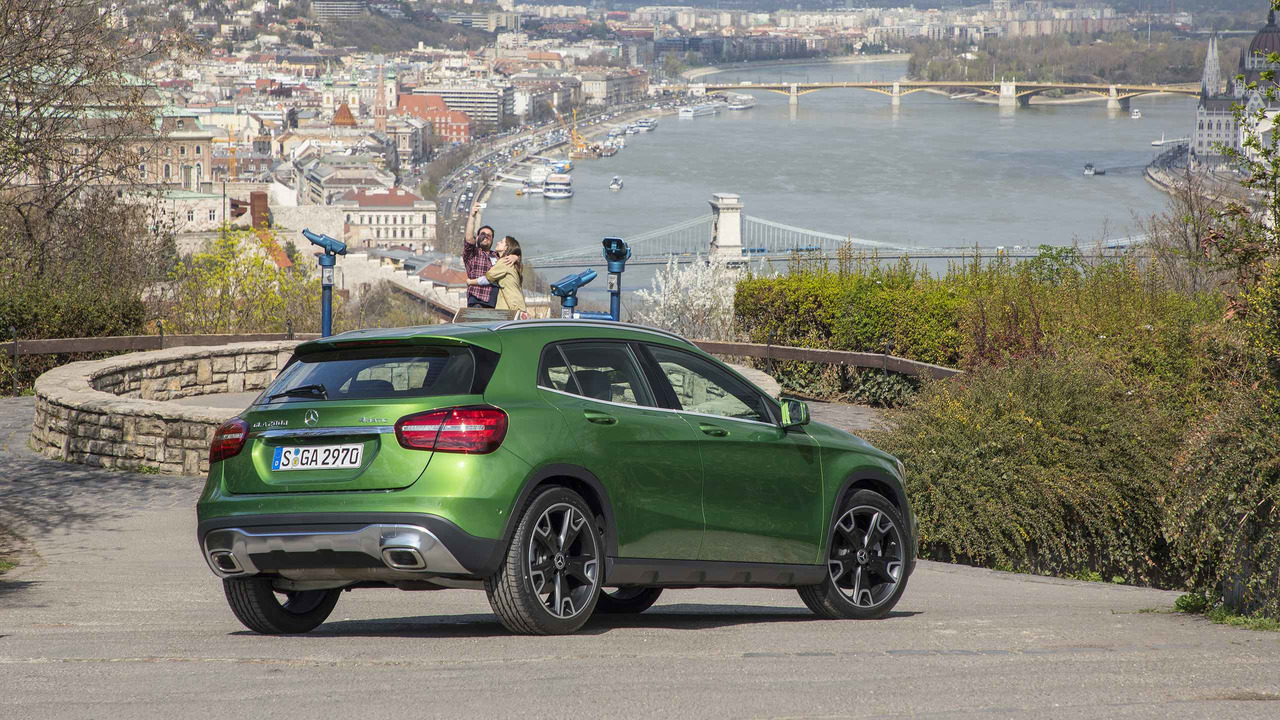 The revised Mercedes-Benz GLA is classy, but not quite class-leading.

Mercedes-Benz ever-so-slightly primps the smallest of its five SUVs, the GLA, for its midlife facelift. Sitting in the premium crossover class occupied by the likes of the BMW X1 and Audi Q3, the Mercedes finds its position further under threat from newer rivals emerging from the ranks of the ‘non-premium’ crossovers – such as brilliant vehicles like the Seat Ateca and Peugeot 3008.

What the Mercedes offers is the most car-like appearance and driving experience of anything of a comparative size, as the low-slung GLA is little more than a slightly higher-riding A-Class. This particular facet of its character is both a blessing and a curse, as we shall soon come to see.

The benefit of having the GLA over and above an A-Class is the additional space it offers within, plus its marginally elevated driving position. Two diesel and three petrol engines are available, starting with a 136-horsepower motor in the GLA 200 d and culminating in the mighty Mercedes-AMG GLA 45, now up to 381hp and 350lb ft for 2017MY. Most GLAs come with 4Matic all-wheel drive and what we’ve driven here is the 177hp 220 d, likely to be a popular choice in the revised line-up.

Don’t strain your eyes – this GLA update is another of the many, many mid-life model facelifts that are next to impossible to spot, unless you’re forearmed with the knowledge of what has changed. Mercedes has altered barely a panel nor headlight cluster’s shape for the 2017MY GLA, so it looks all but identical to what we’ve had since 2014.

There are modified bumpers, some new designs of alloy wheels, all-LED headlamps (replacing bi-Xenon units), and a new colour, called Canyon Beige – a sort of bronzey-gold hue, rather than something akin to a hearing aid. It’s quite nice, actually. Inside, it’s basically just chromed detailing, new upholstery for the seats and the option of a 360-degree camera system. We told you this was minimal stuff.

Of course, the GLA has always been a handsome car so failing to enact radical changes upon its aesthetics is probably a sensible decision on Merc’s part. But, aside from that aforementioned power hike for the range-topping, bellowing GLA 45, very little has changed elsewhere, either. Mercedes hasn’t widened the engine choices nor thrown in much in the way of extra equipment, so there’s the very real possibility that familiarity with the GLA offering might result in some customer contempt.

It’s practical, though, and despite the use of some questionable plastics lower in the cabin, it looks and feels premium. Newer Mercedes cabins with flashier displays do somewhat show up the twin-tube instrument cluster and that infotainment screen perched on the dashboard, but by and large the interior is plush and accommodating – even in the rear. Nice big boot, too, as it approaches almost 500 litres with all seats in place.

The GLA 220 d doesn’t come in base SE specification, so that means you’ll enjoy at least an eight-inch display on the centre console, plus Apple CarPlay support, Artico man-made leather, and dual-zone climate control. But you’ll be paying extra for DAB or satnav, which makes the GLA’s robust list prices – from £32,535, if you want this 177hp engine – look all the more steep.

So, we said the car-like appearance and character of the GLA was both a blessing and a curse – allow us to expand on that. In terms of road-holding and handling, the Mercedes is pretty impressive. It has nicely weighted, accurate steering and a dearth of body roll. It should be pointed out that we drove a European-spec car on Comfort suspension, whereas UK GLAs all come with Off-Road Comfort suspension, raising the ride height by 30mm. Previous exposure to this suspension set-up hasn’t made us believe the 2017MY versions will therefore be roly-poly in the corners, so the overall dynamic-driving experience is to be commended.

Yet it’s not thrilling. Drive like a hatchback the GLA might, but the hatchback in question is the Mercedes A-Class and that’s never set anyone’s pants alight, AMG fire-breather notwithstanding. Thus, the GLA doesn’t exactly maximise the potential inherent in its lower stance compared to rivals; indeed, the BMW X1 and Seat Ateca will both feel livelier from behind the wheel, if you’re after a few thrills from your compact SUV-crossover, and you can’t even lord it over other road users in the GLA, as you’re not sitting a great deal higher than people in cars like Ford Focuses or Vauxhall Astras. Blessing and curse, see?

This lack of chassis sparkle is explained by comfort levels that are high, although the low-speed ride quality on larger alloys – think desirable AMG Line specification – starts to feel compromised. Nevertheless, at motorway speeds, the Mercedes’ damping comes into its own and it can really lollop along with a cosseting gait at 70mph.

At such speeds, wind noise and tyre roar are both well suppressed, and the GLA 220 d still uses a seven-speed automatic transmission – rather than the nine-speeder elsewhere in Mercedes’ fleet – that’s perfectly smooth in operation. This is all good… yet, there’s another problem here. And it’s the engine.

For reasons best explained by the powers that be in Stuttgart, Mercedes has stuck with the superannuated 2.1-litre four-cylinder turbodiesel engine on the facelifted GLA, for both this 220 d and the 156hp 200 d lower down the range. This is despite the fact the company has invested many millions of pounds into the new 2.0-litre four-cylinder unit that is already seeing service, and winning acclaim, in the E-Class.

And boy does the 2.1 feel like an anachronism nowadays. It has more than enough punch to propel the GLA 220 d about smartly, thanks to the traction of standard-fit 4Matic drive and a kerb weight the correct side of 1,600kg, but it sounds rough and it feels considerably uncultured both under-seat and underfoot, as it introduces vibrations into the SUV at both idle and during acceleration.

Given that Mercedes did so little else to the GLA during this midlife transition process, bringing in the 2.0-litre turbodiesel would have been a ‘marquee’ move that would have refreshed the range as a whole and moved the car closer to the leading lights in the segment. As it is, however, there’s just the whiff of afterthought about the poor GLA; it’s nothing like as competitive in its class as, for instance, the larger Mercedes GLC is in the market sector above.

Pains us to say it as it’s quite a good car, the GLA… but no, don’t buy one. When it arrived in 2014, it was priced competitively enough against the BMW X1 and Audi Q3 to make it worth serious consideration. But since then, rivals like the smaller, funkier Audi Q2, Seat Ateca, and Peugeot 3008 have all come along, and in most instances they’re significantly cheaper and nicer to own/drive than the pricey Merc.

This facelift was the German company's chance to significantly polish the GLA formula, then, but by keeping it largely as is and sticking with the noisy 2.1-litre diesel engine, Mercedes has left its smallest SUV almost fighting with one hand tied behind its back. Comfortable and attractive it may be, but the Mercedes GLA is some way off being considered class-leading.