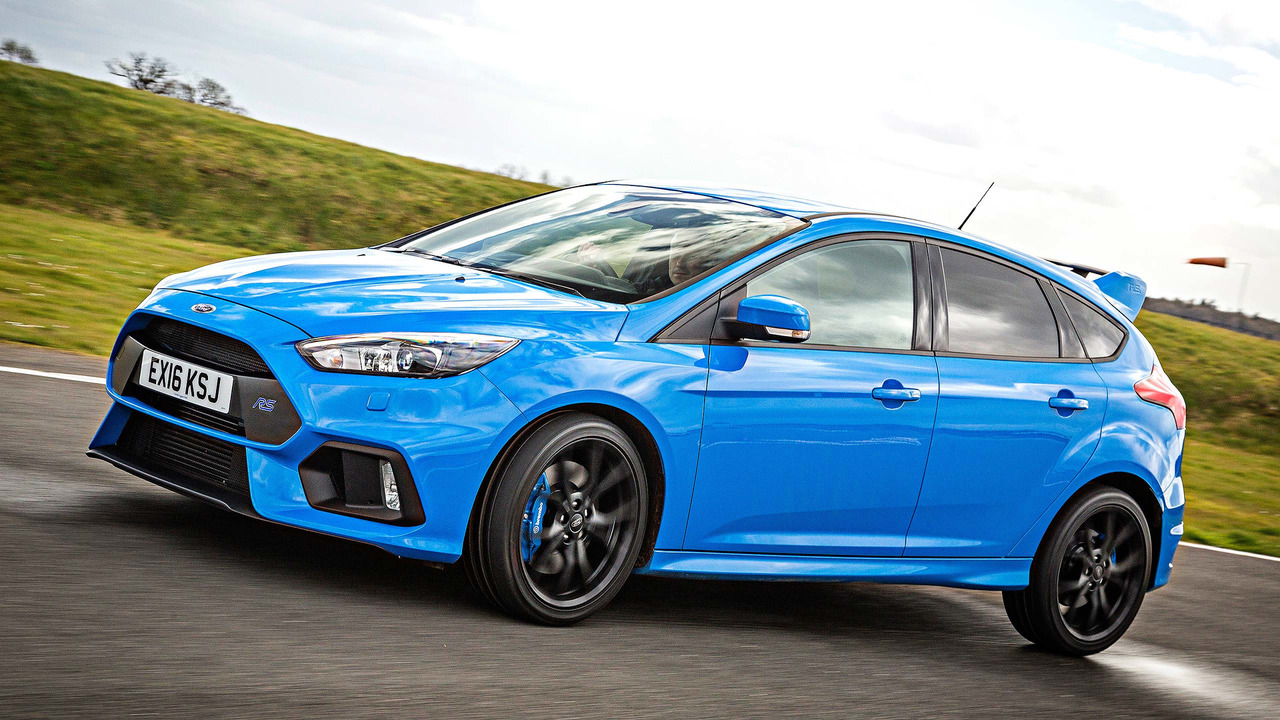 Still one of the most exciting hatchbacks on the market.

Everybody loves a fast Ford, right? Well, not everybody. Despite auction prices that would make a banker blush, hot Fords of the 80s and 90s weren’t always (whisper it) that good. They looked the part, for sure, but many were pretty rudimentary to drive. The original 2002 Focus RS helped banish that reputation for good, and subsequent generations have built on its legacy. This latest Focus RS is the best yet. It’s a riot to drive, without sacrificing everyday usability. This time, everybody is feeling the love.

The Mk3 Focus RS is surprisingly subtle for a fast Ford. There’s no Airbus rear wing or go-faster stripes: just beefier bumpers, a modest tailgate spoiler and a smattering of RS badges. Even the signature Nitrous Blue paint is less in-yer-face than the fluorescent Ultimate Green of the Mk2 RS.

This is the first Focus RS without custom body panels, too. On the plus side, that means cheaper repairs after accidents or parking knocks. The downside is, unless your neighbours are car-savvy, they’ll assume you’ve bought a common-or-garden Focus. At least until they hear the growl of those two bazooka-sized tailpipes...

The subtle theme continues inside – and for anyone who remembers the modded-by-Max-Power cabin of the first Focus RS, that’s an entirely good thing. Recaro sports seats, like those in the Fiesta and Focus ST, are standard, but trimmed in leather and Alcantara here. Blue side bolsters are available at no extra cost, or you can spec the optional hard-shell Recaro buckets for a hefty £1,145. Whichever seat you choose, the driving position is set high for a such a sporty car.

The controls will be familiar to anyone who drives a Focus; a trio of extra gauges atop the dashboard (oil temperature, oil pressure and turbo boost) are the only additions. The over-styled dials and displays don’t offer the crystal clarity of a Golf, and quality isn’t a match for Volkswagen either. However, Ford’s Sync 2 media system is straightforward to use and the Quickclear heated windscreen is a boon on cold days.

You can’t buy a three-door Focus any more, so the RS has five doors. Unlike the ST, however, you can’t buy an estate version.

There’s ample space in the front, and even the optional race-style Recaros accommodate all but the lardiest of backsides. Unfortunately, the news isn’t so positive in the back, where bulky front chairs and the central transmission tunnel restrict legroom. Three adults sitting abreast will have to draw straws for who gets the middle ‘hump’.

A smaller boot is the price you pay for four-wheel drive. The rear differential results in a higher floor and a modest 260 litres of space, versus 316 litres in the regular Focus hatch – and 343 litres in the rival Volkswagen Golf R. Some superminis are more spacious.

The Focus comes with Ford’s latest Sync 3 media system. An eight-inch colour touchscreen provides access to audio, sat nav, climate and communication functions. You can pair it with your smartphone via Bluetooth for full Apple CarPlay and Android Auto connectivity. Alternatively, you can use the impressive voice-control, allowing you to keep your hands on the wheel.

In general, the system is operated by an eight-inch touchscreen. It’s mounted high on the dashboard, making it easy to glance at on the move, but selecting some of the functions can be fiddly. We’d prefer a separate, rotary controller between the seats, as offered by Mazda and most of the premium brands.

Let’s deal with Drift mode first. Having a dedicated mode that softens the shock absorbers and directs drive rearwards to make the car go sideways is either: a) brilliantly cool or b) borderline irresponsible. However, if you do have the luxury of an open race track, the RS perform long, easily-controllable tailslides until its tyres go pop. The spirit of the classic Mk2 Escort is alive and well.

On the road, with Normal or Sport mode selected, the Focus feels altogether more, er, focused. Huge cornering grip is followed by formidable 4WD traction as you blast away. There’s a still a hint of rear-wheel-drive attitude, but even backing off mid-corner won’t provoke the chassis to bite back. The fast Focus works with you, not against you, with communicative steering and feeling of adjustability that’s rare in a hot hatch.

It’s seriously quick, too. Use the Launch Control – which holds the revs, then dumps the clutch for a full-bore getaway – and you’ll hit 62mph in 4.7 seconds. You will need to shift the six ratios yourself, though; unlike some rivals, there’s no semi-automatic gearbox option.

Ride comfort? It’s as you’d expect: firm but nicely damped. It bumps and thumps a little around town, but feels less jittery than the smaller Fiesta ST.

The biggest threat to safety in the Focus RS will be your right foot. Its prodigious performance is all-too-easy to exploit and you’ll need a cool head to avoid getting carried away. And, just to reiterate, Drift mode is for track use only...

If the worst does happen, it’s good to know the Focus gained a five-star Euro NCAP rating when crash-tested in 2012. Its individual scores are 92% for adult safety, 82% for child safety, 72% for pedestrian protection and 71% for safety assist (active accident-prevention features).

Bold and bright Nitrous Blue is the paint colour to have, particularly as it’s unique to the Focus RS. But it’s also the most expensive option, at £745.

The rest of the palette is quite limited. Stealth – a dark grey/blue – is the only free colour. Opting for Frozen White will cost you £250, while Magnetic (gunmetal grey) and Shadow Black are both £525.

The RS is fractionally longer and lower than a standard Focus. It’s a relatively compact car that’s easy to manoeuvre and park – and should fit comfortably in a standard-sized garage. Watch the ground clearance over speed humps, though.

Nobody buys this car to save money on fuel. Official economy is 36.7mpg, but drive as Focus RS development tester – and former Stig – Ben Collins intended and you’ll be lucky to get anywhere near that. Reckon on mid-20s mpg in regular use, or high teens for a B-road blat.

Service intervals for the RS are identical to the regular Focus, at one year or 12,500 miles – whichever comes first. Ford has the largest network of dealers in the UK, too.

Overall Ford reliability is mid-table, according to Which?, but much will depend on how your RS is driven. If you use the car for track days, expect maintenance costs to increase exponentially. High performance consumables, such as Michelin Pilot Super Sports tyres, don’t come cheap.

The Focus RS originally went on sale in late 2015 for a smidgen less than £29,000. Prices have crept up steadily since then, however, and the entry ticket is now £31,765. And unlike a standard Focus, don’t expect to negotiate a big discount on the RS – these cars remain in strong demand.

Nonetheless, the car is still good value when you consider the power and performance on offer. It outguns almost everything else at the price.