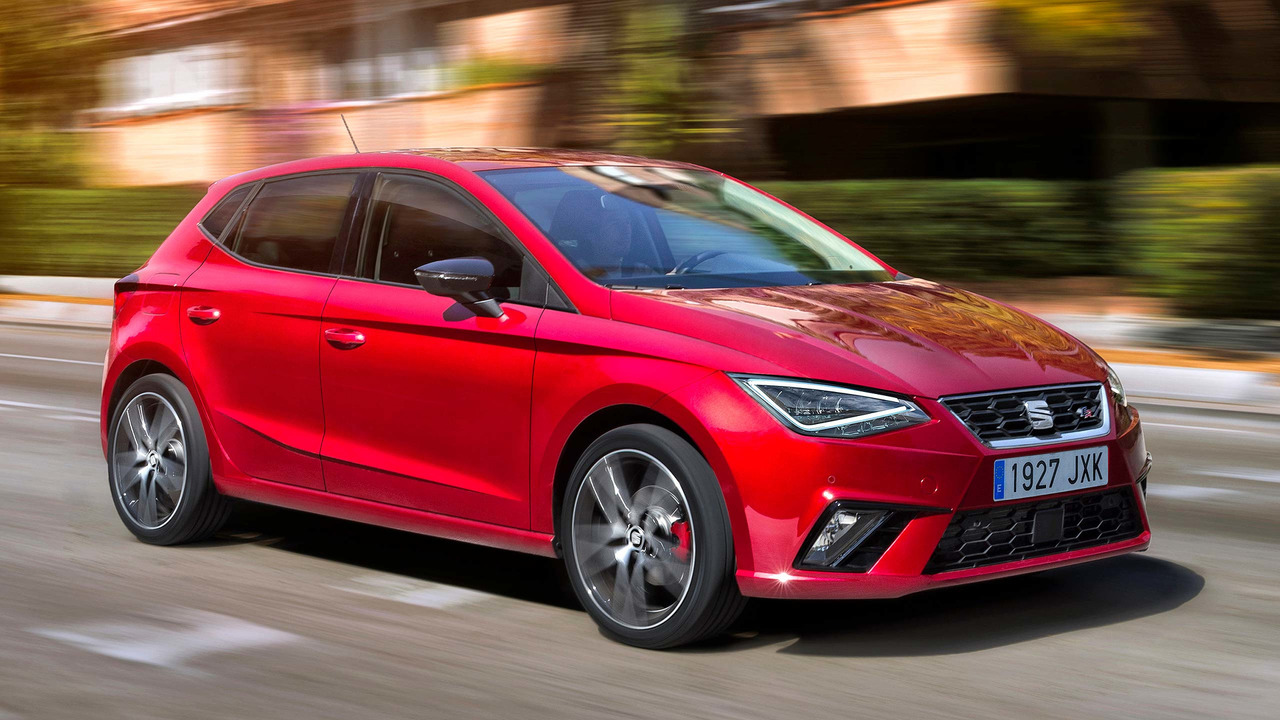 New Seat Ibiza blazes the trail for the Volkswagen Group's next generation of small cars.

Meet the fifth generation of Seat's supermini. It's not at all 'mini' any more, being a hefty 87mm wider than the previous model and gaining enough extra interior space to make it a proper small family car. That's because under the crisp-edged new skin lies a shortened version of the Volkswagen Group's versatile MQB platform, first used for Golf-size cars, later expanded to Passat-size vehicles and now, dubbed MQB A0, contracted for the Ibiza. It will also underpin the soon-to-be-launched Arona compact SUV, and later the next-gen VW Polo.

Why is this important? Because MQB-based cars so far have all felt particularly solid, high in quality and good to drive, and because a broader Ibiza adds to the notion that today's 'superminis' now do exactly what Golf-size cars used to do. What this will do to sales of Seat's own Golf-rivalling Leon remains to be seen.

Connectivity is central to the Ibiza's offer, as befits a brand buyer profile around 10 years younger than that of rival brands. So top models get a well-specified infotainment system with an 8in screen and built-in Apple Car Play, Android Auto and Mirror Link, plus an inductive charging tray for suitable smartphones. The launch range of engines consists entirely of 1.0-litre, three-cylinder units, starting with an unboosted 75hp and progressing via turbocharging to 95hp and the sporty-flavoured FR model's 115hp option.

A double-clutch automatic gearbox option arrives for that last version soon after sales start in July, along with a 1.5-litre, four-cylinder FR with 150hp. Diesels arrive later in the year, with 1.6-litre engines offering 80, 95 or 115hp.

This is a dramatic-looking car, its style majoring on crisp edges and angles within a rounded profile. There's a theme of triangles – a Seat favourite – in the LED headlights, the rear lights and the door mirrors, and the short tail helps give the impression of a taut, agile car. All new Ibizas come with five doors, and there's no attempt to hide the rear doors and pretend the car is a coupe.

There's a real air of quality about the way the Ibiza is designed and built. It's the equal of an Audi in the way it's put together – the real meaning of 'build quality' – but its place in the VW Group pecking order is made clear when you open a door. The beautifully-fitting trim panels are all of hard plastic, albeit with a matt finish where you might hope for padding such as on top of the facia and along the top of the door trims.

The seats are firmly comfortable, and the 95mm increase in wheelbase along with that wider body means there's an extra 42mm of rear shoulder room and 35mm more rear knee room. There's a generous 355 litres of boot space, too, a 63-litre increase. The steering wheel adjusts for both rake and reach, an expensive-looking set of instruments sits beyond, and the handbrake is a regular manual lever to the great benefit of close-quarters manoeuvring. Angles abound in the cabin design, echoing those found outside.

That 8in screen senses when a finger is approaching so you don't necessarily have to touch it and leave a fingermark. There are enough direct-access buttons to avoid tedious and distracting multi-level menus, but sufficiently few to maintain a crisp, clean look.

Very well indeed. You can feel the benefit of the stiff structure in the way the Ibiza combines taut handling with a quiet, absorbent, well-controlled ride never spoilt by bangs or shudders. It steers precisely, even when cornering hard with a big lateral load on the front wheels, and changes direction keenly enough to merit Seat's insistence that the Ibiza is more fun to drive than most of its rivals. The brakes, though powerful enough, can be a bit snatchy.

Those comments on the ride apply equally to the regular suspension and the FR's slightly firmer settings, in which the dampers firm-up a little more again when the Ibiza is switched to Sport mode. The differences between all these suspension calibrations is minimal, actually, and the increased steering resistance and accelerator responsiveness of Sport mode is also quite subtle.

With just a 1.0-litre capacity, the engine relies a lot on the turbocharger's efforts to gain its pace. We drove the top 115hp version, with 148lb ft of torque, which pulls very smoothly with its characteristically deep three-cylinder note, but feebly at low engine speeds until the turbo boost arrives. In sixth gear it's turning at just 2300rpm at a 70mph cruise, so don't expect much urge without a downshift if trying to overtake on a motorway incline.

The gearchange has a particularly light, machined, well-oiled action, and there's little wind noise. A Beats Audio sound system, with 300 watts and seven speakers, is available for top models; it gives a good, solid sound.

We also sampled the 1.5-litre engine, whose 150hp gives the Ibiza FR very lively performance (no figures are available yet) with minimal turbocharger lag. It's the Ibiza for the keen driver, without doubt.

You probably should. There's the usual Seat draw of Volkswagen quality at a lower price, and the Ibiza is currently the most advanced, the roomiest and the best-resolved of the Group's small cars. It looks good, is fun to drive, can be had with the latest safety kit (Traffic Jam Assist, Front Assist, Adaptive Cruise Control) and is right on the pace with its connectivity.

Trim levels are S, SE, FR and, at the top of the tree, Xcellence with a luxurious approach, hard surfaces notwithstanding. Only the last two get the big screen, all the infotainment features and a DAB radio, although even the base models are quite well served with connectivity. A manual 1.0 FR would be our choice, until the 1.5 arrives.