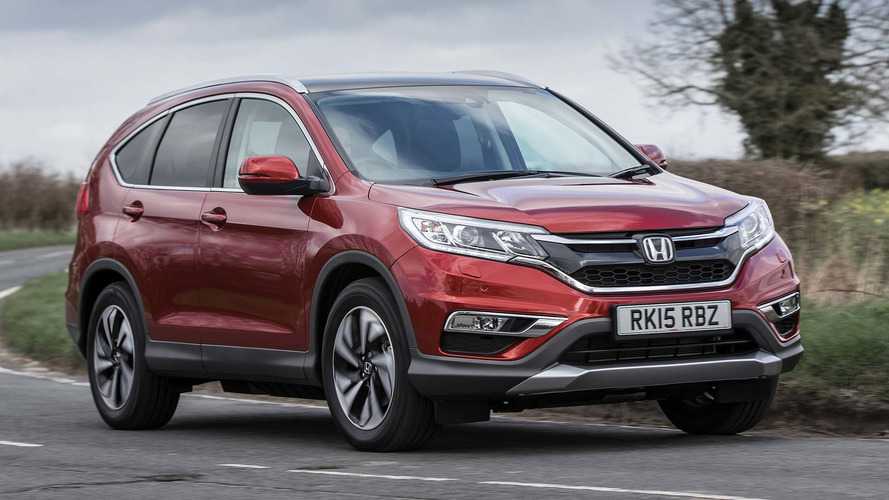 In its own words “a car that looks like an off-road vehicle but has virtually no off-road ability”.

Big on capacity, short on charisma, the Honda CR-V makes a dependable, practical family car. You can’t get more honest than that, yet the CR-V is far from alone. There are at two dozen others out there with the similar credentials. Four-wheel drive is very much on the options list, which means the less complicated front-wheel-drive CR-V starts at a reasonable £23,000.

That’s more than the equivalent Kia, Hyundai or Ssangyong, but then the CR-V has always been slightly more of a car than these. It’s not really a crossover, more a rival for the BMW X3 or VW Tiguan. Or even, at the top end of the CR-V range, the Range Rover Evoque.

The fourth-generation CR-V was launched late in 2012, so it’s far from the latest car on the block. It did undergo a refresh in 2015, though, which tidied up the styling and brought in a more powerful 1.6 litre-diesel engine to replace the less efficient 2.2-litre, plus, incredibly, a nine-speed automatic transmission as an option on the 1.6 diesel 4x4 model.

Did you know? The model range is vast, comprising six engine/transmission combinations and six trim levels.

Back when it was launched in 2012, the CR-V seemed like a pretty good choice – no, a remarkably good one. The interior space, likely reliability and pricing stood it in good stead against rivals. Today, only the roominess still stands out, and there are many more modern SUVs, some with the option of seven seats.

The Honda CR-V still has its trump card of space for people and their luggage, which none of the obvious rivals – VW Tiguan, Hyundai Tuscon, Kia Sportage, Nissan Qashqai – can equal. You’ll need to move into the seven-seaters, in five-seat configuration, to equal the CR-V, and then you’ll have to shell out more. So, the Honda CR-V still has justifiable appeal for some buyers.

Never an outstanding piece of automotive style, the CR-V now looks decidedly lumpen against the latest car designs. It’s the automotive equivalent of a snail, carrying a house on its back that is rather larger than necessary. Of course, that translates into a spacious interior, but even mid-field competitors like the Hyundai Tucson and Kia Sportage look almost avant-garde next to a CR-V.

To be fair, the 2015 facelift did offer some improvements. New headlights with LED running lights, a cheekier grille and other changes to make the CR-V look wider and lower at the front helped – and there were fancy new LED lights at the rear, too.

The CR-V makes ideal family fodder. Too many crossovers and 4x4s can underwhelm when it comes to space. The benefits of high seating and great visibility don’t necessarily carry through to capacity – especially where luggage is concerned. An ordinary Ford Mondeo or Vauxhall Insignia estate will better many for volume, if not image.

The CR-V is the exception here. Rear-seat space is great, easily taking three adults or, mixing adults and kids in their Isofix child safety seats. In the front, the seats are large and squidgy, with decent support most of the time and wide enough bases for Americans. That can mean you roll from side to side a little during cornering, though.

The seat heaters are powerful. The floor is noticeably high, however, so you drive with legs out rather than bent.

This CR-V is a touch lower than the previous model, but it certainly feels a step up in capacity for both people and their gear. Almost all the obvious rivals – Ford Kuga, Kia Sportage, Hyundai ix35 and especially the Range Rover Evoque – fail to match the Honda’s luggage space. There’s even the ability to fit three full-sized mountain bikes in the back. Simply remove the front wheels, drop the saddles and they stand up side-by-side, with room for a single rear passenger at the same time. The rear seats fold down in a single action.

The age of the CR-V counts against it in the race for the latest technology, yet the 2015 facelift saw things brought much more up to date. The then-new Honda Connect audio and information system brought DAB and internet radio, Bluetooth connectivity, internet browsing, satellite navigation and a rear-view parking camera. It’s compatible with the Android 4.0.4 smartphone operating system, using familiar pinch, swipe and tap functionality through the seven-inch display screen. Honda Connect is fitted to everything above SE-level cars.

This system also comes with a number of pre-installed apps, with others available for download from the Honda App Centre. The ‘Aha’ app gives access to thousands of audio stations – music, news, podcasts and audiobooks – as well as social media feeds and location-based services such as restaurants and hotels. Satellite navigation comes from Garmin.

Not surprisingly, the emphasis is on diesel engines in the CR-V range. The earlier 2.0 diesel was replaced by a second 1.6-litre model, so now the choice is either 120hp, or 160hp in higher-specification CR-Vs. There’s the option of a nine-speed automatic transmission, although only in the more powerful version, and only combined with four-wheel drive.

Most Honda CR-Vs will be sold in front-wheel-drive form, which will undoubtedly suit most buyers very well. The car handles nicely and is dead easy to drive. The obverse is that it is far from a stimulating experience, the soft suspension giving a smooth-ish but uninspiring ride.

The manual gearchange is light, while the nine-speed automatic is impressive. Only one engine stands out, though: the more powerful 1.6-litre diesel. It has ample power, whereas the lower-powered 1.6 diesel can struggle at times.

That brings us to the 2.0-litre petrol engine, which is some way behind today’s technology. Without a turbocharger, it lacks outright performance and doesn’t do well in terms of economy or emissions. The automatic transmission, if you choose it, has only five speeds, which these days seems inadequate.

Euro NCAP tested the CR-V in 2013 and awarded it a five-star safety rating. It scored well across all areas, with 93% for adult occupant protection and 74% for child protection. The safety assist score was 66%, and the pedestrian safety rating was 68%.

The CR-V comes with an array of airbags, front, side and curtain, plus a stability system to keep the car in check should it start to slide in corners. Automatic low-speed braking applies the brakes in an emergency and is standard across the range. Executive models get a whole host of extra features that can be specified as option packs on lesser models, including lane-keep assist, cross-traffic monitoring (for reversing) and radar cruise control.

Nine colour choices are offered on the Honda CR-V, but only one, Rallye Red, is a no-cost option.

S-spec models are too basic – they don't even have parking sensors – essential kit on a car like this. The SE Plus Nav gets pretty much all you’ll need, including satellite navigation and the comprehensive Honda Connect media system.

The Honda CR-V is a bulbous car, and although not difficult to park, the lack of sensors on lower-spec models is an inconvenience.

The most economical CR-V is the lower-powered 1.6 diesel. Fitted only with front-wheel drive, it has claimed economy of 64.2mpg, a figure that borders on the absurd. CO2 emissions are 115g/km. Pick the more powerful 1.6 diesel with four-wheel drive and these figures drop to 57.7mpg with 129 g/km CO2. With the nine-speed automatic transmission, the numbers are 55.4mpg and 134 g/km.

So, that sophisticated automatic transmission is very close in efficiency to the 1.6 CR-V with a manual gearbox. However, if you tend towards a petrol-engined car, the CR-V doesn’t show nearly as much promise. The combined economy figure is 39.2mpg for front-wheel-drive version, 38.2mpg for the 4x4, and 37.7mpg for the auto. CO2 figures are 168, 173 and 175 g/km respectively.

According to Which?, the latest Honda CR-V is not as reliable as you might have hoped, merely ‘middling’. Tyre-pressure sensors are the most common thing to go wrong. Diesels are not quite as reliable as petrol models.

CR-V prices have crept up rather more quickly than inflation since it was launched back in 2012. The base price of just over £23,000 may seem reasonable for a car with this level of space, but you’ll be looking at over £27,000 for a decently specified 1.6 SE Plus Navi. The most desirable CR-Vs all run to over £30,000.

The good news for private buyers is that the CR-V holds its value well, selling for strong prices on the secondhand market. So if you buy new, you’ll lose less than on most rivals.