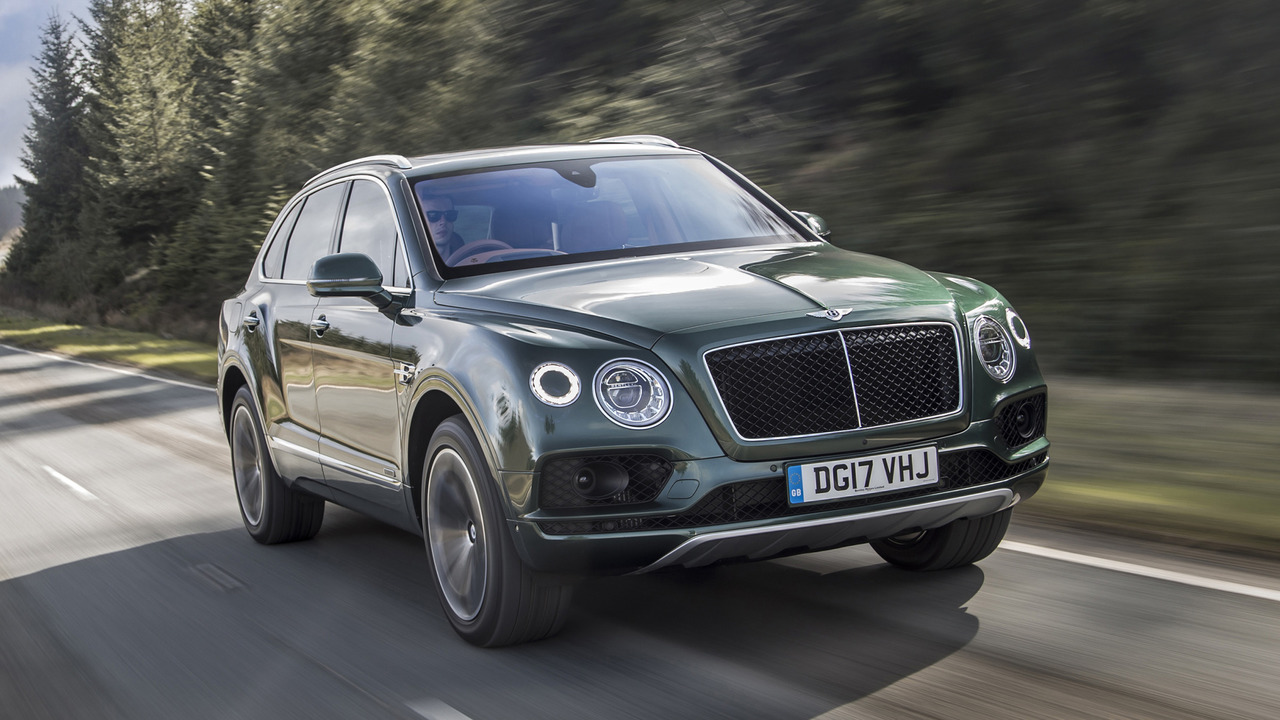 Driving on roads and through rivers in Bentley’s first ever diesel.

“Bentayga is all about firsts,” says Peter Guest, the man referred to in Crewe as ‘Mr Bentayga’. “It was Bentley’s first SUV and now it’s Bentley’s first diesel. In time, it will become our first plug-in hybrid.”

Guest is a man with an enviable track-record: his CV includes the Aston Martin DB7 and Renaultsport Clio V6. Yet his enthusiasm for the Bentayga – a vehicle that, particularly with a diesel engine, seems the antithesis of a sports car – is infectious. Can a black-pump Bentley really be exciting?

Well, having 435 horsepower and a stonking 664lb ft of torque probably helps. The Bentayga’s 4.0-litre V8, shared with the Audi SQ7, boasts an electrically driven supercharger and two turbochargers. That means 0-62mph in just 4.8 seconds and a top speed of 168mph – not bad for something the size of Cheshire.

More importantly, the diesel Bentayga delivers an official 35.8mpg, versus just 21.6mpg for the 6.0-litre petrol W12. Are Bentley buyers fussed about fuel economy? Perhaps not, but the ability to drive a couple of hundred extra miles on each tankful is a real bonus. As Guest wryly remarks: “Filling up with fuel is not a luxury experience.”

The Bentayga already accounts for nearly half of Bentley production, but a diesel is new territory for Bentley and Guest freely admits they have “little idea” how many buyers will choose the new engine. However, a starting price of £135,800, versus £162,700 for the W12, is sure to help.

We travelled to Bentley’s home town of Crewe to watch the Bentayga diesel being built, then drive it on- and off-road in the Peak District.

Bentley may have been swallowed up by the Volkswagen Group, but it hasn’t forgotten its roots; the level of human skill in building a Bentayga is breathtaking. We watch bull-hides being expertly examined, cross-stitches being hand-sewn onto steering wheels and wood veneers being lovingly buffed. “That’s the difference between premium and luxury,” says Guest. “A Bentayga takes around 130 hours to build, versus about 10 hours for a mass-production car.”

It seems a shame, then, that Bentley – perhaps cowed by reaction to the original EXP 9 F SUV concept – didn’t make the same effort with the styling. The Bentayga is ungainly from some angles and curiously bland from others. A black grille and ‘figure of eight’ exhaust tailpipes are the only tell-tale differences for the diesel.

Better to climb inside, where you’ll encounter a lofty driving position, excellent ergonomics and build quality that puts even sister-brand Audi to shame. The Bentayga’s doors feel like they’re hewn from ingots of solid steel, while every control, from gearshift paddles to electric window switches, operates with perfectly-weighted precision.

Some may baulk at the absence of a full-width digital display behind the steering wheel (à la Audi Virtual Cockpit), but we rather like the clarity of trad white-on-black dials – particularly given Bentley’s links with high-end chronographs.

Speaking of posh watches, the Bentayga’s most expensive option is the Mulliner Tourbillon by Breitling. A self-winding mechanical dashboard clock made of solid gold with six inlaid diamonds, it will set you back €150,000 (£130,000).

Back on planet Earth, you can also chose four, five or seven seats, plus a variety of option packs known as ‘Specifications’. City Specification (£4,330) is the essential one, and includes automatic emergency braking, park assist, traffic-sign recognition and rear cross-traffic alert. You’ll also need All-Terrain Specification (£4,955) if you plan to tackle the rough stuff.

Before we get to the (slightly irrelevant?) question of how the Bentayga handles a rock-strewn river bed, let’s start with some road driving. And what roads! Crewe is on the doorstep of the Peak District, with rollercoaster ribbons of tarmac that attract hundreds of bikers every weekend.

Fire up the V8 and – as per Bentley’s stated aim – there’s no indication that you’re driving a diesel. Where the Audi SQ7 rumbles and roars, the same unit in the Bentayga never emits more than a subdued snarl. It’s impeccably refined, especially given its prodigious power output.

That 435hp total plays 608hp in the W12, so the diesel still won’t win at Top Trumps. However, both engines produce an identical 664lb ft of torque, meaning you’ll notice scant difference in everyday driving. With maximum thrust from just 1,000rpm, the diesel feels incredibly tractable at any speed. It’s indecently quick, and surprisingly fun on the right road.

Our test car was fitted with Bentley’s optional Dynamic Ride active suspension – standard on the W12, but £3,885 here. Using the supplementary 48-volt electrical system that also spins the supercharger, it decouples the anti-roll bars when travelling in a straight line to improve ride comfort, then reconnects them as you turn.

The result is cornering prowess that leaves a Range Rover floundering, along with long-distance comfort a Porsche Cayenne can but dream of. Don’t buy a Bentayga without the ‘Dynamic Ride’ box ticked.

And yes, if you do abandon Kensington/Bel Air/Palm Jumeirah (delete as applicable) and ‘go rogue’, the Bentayga is as capable off-road as any six-figure luxury SUV needs to be.

With ‘mud and ruts’ mode engaged, we clambered and crawled our way along several green lanes, finishing with a spectacular – and very slippery – river crossing. Even on summer tyres, the Bentley never put a wheel wrong, its traction and hill-descent systems taking the hard work out of tough terrain. We didn’t even get the carpets muddy.

Some buyers – particularly in this rarified section of the market – will always want more. With a hint of weary resignation, Peter Guest tells me how some Bentayga owners have already fitted their factory-fresh cars with wheelarch-scraping alloys and engine tuning kits.

If you’re of that mind, and you have the money-no-object bank balance to match, only the ultimate W12 will do. But for most, the 4.0 V8 diesel is all the Bentayga you could ever need. It’s £27,000 cheaper, hugely more fuel-efficient and, crucially, it doesn’t feel like a compromise.

The diesel’s tumultuous torque easily makes up for any shortfall in power, and any qualms about refinement are dismissed the first time you bury your right brogue. The thought of an oil-burning Bentley was enough to cause certain chaps to choke on their G&T, but the Bentayga diesel proves the traditionalists wrong.

We’re still not sold on the styling, but the fabulously fast, comfortable and capable Bentayga diesel is a formidable all-rounder. If you can afford the price of entry, you won’t be disappointed.