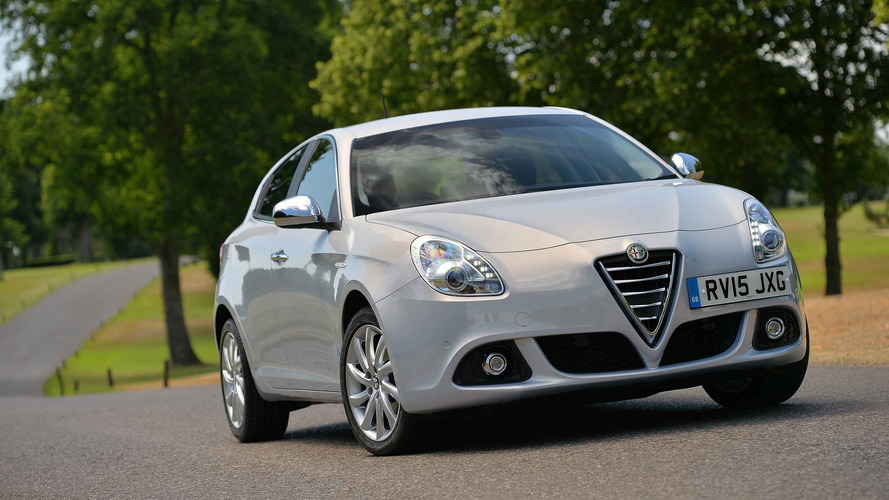 The Giulietta, spiritual successor in some ways to the sainted Alfasud, was supposed to be Alfa’s rival to the Audi A3 and BMW 1 Series, but disappointed from the start with mediocre driving dynamics, poor refinement, and a cabin ambience that lacked the quality of its German rivals. Alfa has made several revisions to the car, in 2014 and again in 2016, which have helped raise its game significantly and it’s now a respectable premium hatch, with good pricing, albeit one that’s still behind the curve compared to rivals.

Did you know? When the Giulietta was first launched, its platform was designed to take front- or four-wheel drive, but never did have 4WD in this Alfa.

It’s the magic and romance of the Alfa badge that grants the Giulietta an extra half star in this case. To be honest, if it were from any other brand we’d probably mark it down, but it exhibits sufficient enthusiasm in its driving and has such delightful styling that we’re prepared to allow our hearts to overrule our heads in this case. It’s just about good enough in terms of quality, handling, and refinement to make it a viable alternative to the German mainstream, but really we know (thanks to the Giulia) that Alfa can do much better than this.

You would think that having cars such as the (glorious, if fragile) Alfasud and the (underrated) 147 in your family tree would make life easier for the Giulietta, but sadly that’s just not the case. Our obsession with premium German brands means that each new Alfa has a mountain to climb. Thankfully, the Giulietta gets off to a good start with its styling.

Alfa tweaked the looks just a little in 2016 with new radiator grilles (now with mesh inserts if you fancy), some piping and highlighting in red and altered headlights, but the Giulietta looks fundamentally the same as when it was first launched in 2010. That’s no bad thing though, as it’s pretty, well, pretty.

While it does suffer slightly from the Mito’s problem of trying to stuff the styling of the big 8C supercar into a hatchback shape, the Giulietta’s extra size means that the styling has room to breathe, and so it ends up looking like one of the most pert and perky hatchbacks around. Certainly more eye-catching than the likes of an Audi A3 or BMW 1 Series.

As for image, well much of that will depend on quite how much of a car nut you are. Most buyers simply don’t care about Alfa’s glorious, if erratic, history so won’t be much moved. Those who truly care about their motoring may well be swayed by having a car with the same badge as Juan Manual Fangio or Nino Vaccarella.

The Alfa Giulietta’s cabin was for a long time its weakest point, with poor front seats and unacceptable quality. The 2014 update did a lot to solve that, and brought in much more comfortable front seats, plus a major improvement in the quality of the cabin plastics. There are still issues though – the handsome main dials are pushed out to the sides of the instrument panel by an ugly digital display, the steering wheel looks and feels unnecessarily big and bulky, and there’s still a lack of space in and around the pedals for those with bigger feet. All of these things rankle, but on the whole the cabin is now just about up to scratch, and feels more as if it will hold together properly as the car ages.

The Giulietta must tread a delicate middle ground between being sporty enough to be counted as a mild hot hatch and yet practical enough for families. It manages, just, to hit that middle spot. Space in the front is very decent, while space in the back seats is OK, but probably nothing more than that. There are ISOFIX points for child car seats in the back and the front passenger airbag can be switched off if you need to install a child seat there too.

At 350 litres, the boot is a little smaller than that of a BMW 1 Series, but much smaller than an Audi A3’s, and it only expands to 1,045 litres when you fold the back seats. Actually, those rear seats don’t fold flat at all, but hinge about an inch above the floor line of the boot, making for an awkward step and a sharply-sloping seatback when trying to load long items. Combine that with a high loading lip and the Giulietta is not the car you’d choose for a run to Ikea, although it’s roomy enough for day-to-day use.

All versions of the Giulietta come with a Uconnect Connect touch screen, which is simple to use and comes with both a USB connection and Bluetooth streaming as standard. That basic unit has only a five-inch display though. Up the spec and you get a much better 6.5-inch screen, which comes with integrated satnav, voice recognition, and an SD card slot. Both versions can be had with Uconnect Connect Live services, which include such functions as voice control for Twitter and Facebook, live news feed, eco-driving tips and monitoring, streaming music services from Deezer and TuneIn Radio and more, depending on your internet connection. All models get DAB radio and there’s the option of a high-end Bose sound system too. There are no options for a larger screen though, which, considering that some rivals are now offering up to 10-inch screens, seems a little disappointing.

The Giulietta is fun to drive, but it’s not very sophisticated. That big, awkward steering wheel seems to smother a lot of what steering feel there is, and the ride quality is just a bit too busy and a bit too noisy for spinal or aural comfort. It’s a lot less sophisticated in feel than an Audi A3 and nowhere near as much fun as a Volkswagen Golf GTI.

That said, there is some compensation. For all the lack of steering feedback, it is still an agile car that rewards, up to a point, a bit of keen driving. You’ll enjoy it, even if you realise that it’s not actually all that good. The Q2 electronic differential (standard on all models) does help a little with traction on greasy surfaces. The DNA system, which allows you to choose between Dynamic, Normal, and All-Weather modes, is a touch gimmicky, but the All-Weather function can be useful on slippery surfaces.

On the engine front, it’s rather a mixed bag. The 1.4 TB engine comes in 118bhp, 148bhp, and 168bhp forms and all three are very sweet units, smooth and eager, with the 168bhp engine, when fitted with the TCT dual-clutch automatic gearbox, returning an impressively low 114g/km of CO2. The top-spec Veloce model, with its 237bhp 1750 turbo engine, should be a real rival to the Golf GTI, but sadly it’s more fast than furious. It’s a great engine, but the chassis and steering can’t keep up.

The diesels are the weakest engine entries. The 2.0-litre JTDm unit isn’t bad, with a choice of 148bhp or 173bhp versions, but the 1.6-litre 118bhp, although rapid, is just too noisy to be competitive.

The Alfa Romeo Giulietta was tested on its launch in 2010 by EuroNCAP and received a full five stars for safety, with a whopping 97 per cent score for adult occupant protection (better than some big Volvos of the time). It scored 85 per cent for child protection, 63 per cent for pedestrian protection, and 86 per cent for safety assist.

All models come with six airbags as standard, stability control with brake assist and a hill-holder function, a tyre pressure monitoring system and LED daytime running lights. Automatic lights and wipers are available on higher-spec models, but you can’t have such advanced safety systems as lane-keeping assistance or autonomous emergency braking as yet.

There are essentially three trim lines for the Giulietta, with a fourth, the Veloce, acting as a standalone halo model fitted with the 240hp turbo 1750 engine.

The Super gets different alloys (but still in 16-inch size), upgraded cloth upholstery, rear parking sensors, dual-zone climate control, front fog lights, an alarm, cruise control, a front centre armrest, and a cooled glovebox. There’s also a Lusso pack, which adds on to the Super, and comes with sports leather seats, 17-inch alloys, the 6.5-inch uConnect screen and some aluminium and chrome trim finishes. You can also choose to complete the pack with heated front seats, electric seat adjustment or 18-inch wheels.

The Veloce version comes only with the 1750 TBi 237bhp engine, the TCT dual-clutch gearbox as standard, titanium-effect 18-inch alloys, leather upholstery, lowered suspension, and a noise-generator to bring fake engine growls into the cabin.

It’s tempting indeed to go for a Speciale model, with its extensive standard equipment, and to add to that a full leather interior, which can be had in black, tan or even dark, lustrous red. With prices starting in the mid-£20,000 region, that’s not bad value.

However, the pretty-well-equipped Super can be had for as much as £4,000 less and the Lusso upgrade is a good value option that gives you many of the extra toys of the Speciale for a good price. Go for that, but make sure you get the red leather seats…

It’s a reasonably compact car, the Giulietta, and doesn’t stray from the boundaries of its class. Small enough to be manageable in town or on a narrow driveway.

Depending on which model you choose, the Alfa Romeo Giulietta can be very affordable to run. That 1.6 JTDm diesel might be hard on the ears, but it’s easy on the pocket with official economy of 74mpg and emissions of just 99g/km, making it one of the most frugal and tax-efficient hatchbacks around. The bigger 2.0-litre diesel can do a quoted 67mpg and has CO2 emissions of 110g/km, so the extra performance on offer doesn’t extract much penalty at the pumps.

Even the petrol engines aren’t bad. We’ve already mentioned the impressive figures of the 168bhp 1.4 turbo, and the 148bhp model still returns a decent 51.4mpg on the combined cycle and emits 127g/km. The black sheep are the basic 118bhp 1.4, which has economy and emissions of just 45mpg and 144g/km and, of course, the Veloce, which returns 41.5mpg and 157g/km.

The Alfa Romeo Giulietta has had just one recall, in 2015, for a possible malfunction on the TCT dual-clutch gearbox. Other than that, they seem to be mostly reliable cars, with few reported major issues.

On-the-road prices start from £18,450 for the most basic Giulietta, rising through £19,780 for a 150hp 1.4 TB, to £19,650 for the most affordable diesel. Super prices start at £21,030, while a Speciale will set you back a minimum of £24,250. The range-topping Veloce starts from £28,845 (which actually makes it more expensive than the most affordable Volkswagen Golf GTI). That makes the Giulietta considerably more affordable, model-for-model, than a BMW 1 Series, but you would have to balance that against likely higher depreciation.