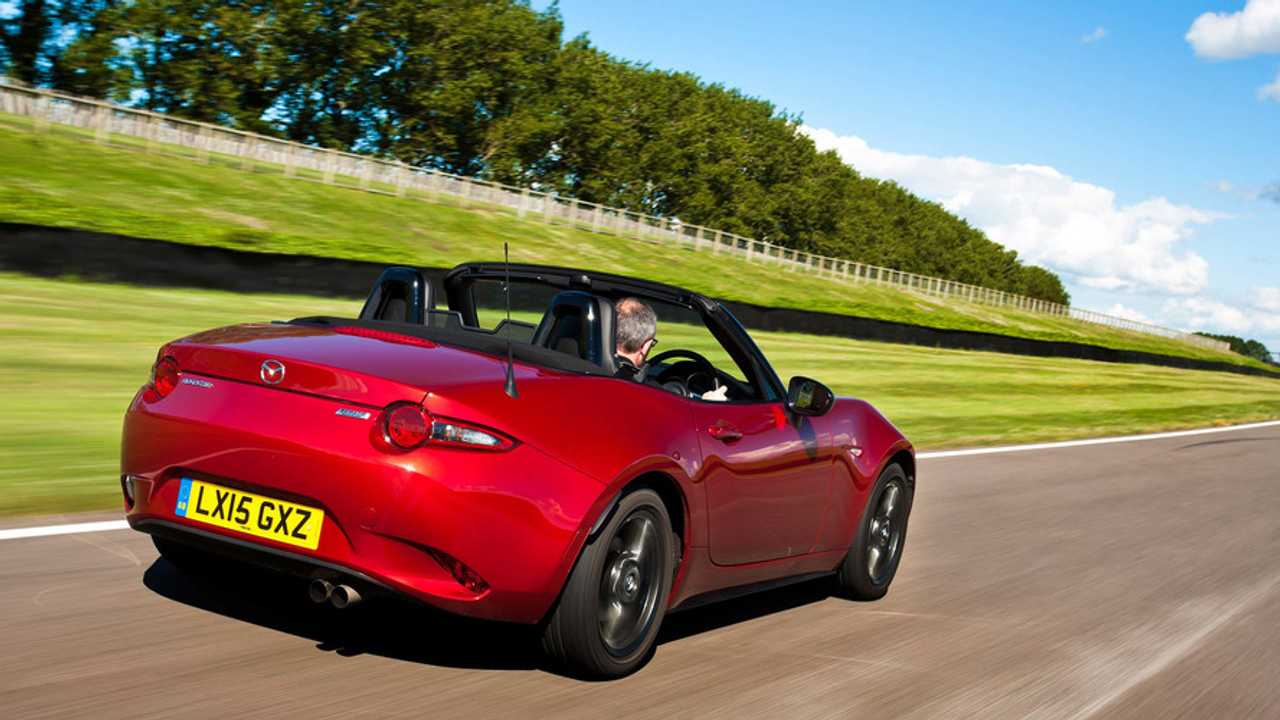 A return to form for one of the market's favourite sports cars.

Smaller and lighter than its predecessors, the fourth-generation Mazda MX-5 promises to be a return to form for the world’s favourite sports car. It shares a platform with the Fiat 124, while power comes from Mazda’s own naturally-aspirated 1.5- and 2.0-litre petrol engines.

Did you know? The original MX-5 was intended as a spiritual successor to British sports cars such as the Lotus Elan and Triumph Spitfire.

The Mazda MX-5 is a sports car bargain. It’s great to drive, looks the part, and represents excellent for value. It’s a shame it falls short on practicality, and some will find it really difficult get comfortable in it.

The fourth-generation MX-5 snubs the trend for cars getting increasingly overweight. It’s 100kg lighter than its predecessor, and a centimetre shorter. It’s even shorter than the first-generation model which was launched in Europe in 1990.

Combine compact dimensions with an angry-looking front end (all part of Mazda’s ‘Kodo’ design language), and you get a sports car that’s begging to be driven hard. It’s retro, without looking like an awkward interpretation of the original MX-5, and it looks much sharper than its bloated predecessor.

The exterior of the regular MX-5, which we’re testing here, is finished off with a simple, fabric roof. There is a folding hard top available too, named the Mazda RF (‘retractable fastback’), but we like the simplicity of the soft-top version. It’s manually operated, and takes a matter of seconds to drop it or put it up.

Those tiny dimensions translate into a compact (read: cramped) cabin. You’ll either fit the MX-5 or you won’t… there’s no reach adjustment on the steering wheel, and no height adjustment in the seat. If you’re a bulkier build, be prepared for catching your arms on the centre console and the door cards, while a bulge in the footwell pushes the pedals to the right and makes for a slightly awkward driving position.

If that all sounds a bit negative, don’t fear. If you do fit inside the MX-5, you’ll probably find it a bit snug but not uncomfortable. The cabin generally scores highly for perceived quality, and it’s several notches above its nearest rival, Toyota’s GT86. All switches are sensibly placed and feel more upmarket than any MX-5 before. The only cheap plastics (try the sunvisors) are generally there for a reason – Mazda says customers will happily forgo some luxuries in return for an ultra lightweight car.

As for how it feels, this is a proper little sports car, with a low-slung driving position, dead-ahead steering wheel, stubby snick-snack gearlever and pedals stretched far ahead and ideally placed for heel-and-toe gearshifts. There are big round dials, a sporty view over the contoured bonnet and the feeling of being sat well back in a perfectly-balanced chassis. Hang the space, this bit is really satisfying.

Mazda has tried to make up for the MX-5’s innate lack of space by adding some afterthought cup holders and the odd bit of hidden storage here and there, but you won’t find a glovebox or door bins in the MX-5. It’s far from practical, but the boot is big enough for a weekend bag or two. Just pack light.

All but the entry-level SE model get a seven-inch touchscreen infotainment system that sits in the centre of the dash and is controlled using a well-placed rotary switch near the gearlever. It’s an intuitive system to use, which gives access to sat-nav, DAB radio and Bluetooth connectivity. The top-spec Sport Nav gets a Bose sound system along with speakers in the headrests, which helps if you like to enjoy music with the roof down.

Opt for the SE and you’ll go without the infotainment system and find an FM radio with a CD player and auxiliary inputs in its place.

This is where the rest of the compromises in other areas of the MX-5 make sense. There are two engines available: a 1.5-litre four-pot producing 131hp, and a 2.0-litre providing 160hp. Many say the entry-level engine is the sweeter unit, as engineers claim the MX-5 was built around the 1.5, and it’s a rev-happy engine that suits the nature of the car.

While we can’t deny there’s fun to be hand in eeking out every last horsepower out of the smaller engine, we’d pay the extra £900 for the 2.0-litre. The bigger engine has more mid-range torque (148lb ft at 4,600 revs) and is less wearing to drive when you’re not in the mood for bouncing off the rev limiter. While these output figures may not sound particularly sports-car like, the MX-5’s low kerb weight (1050 - 1075kg) translates to reasonable performance figures: 0-62mph in 7.3 seconds from the 2.0-litre, and 8.3 seconds from the 1.5.

Outright performance isn’t what the MX-5’s all about, though. The original model is a favourite amongst petrolheads and track day enthusiasts for its nimble handling and the latest incarnation has successfully mimicked its winning formula. Steering is wonderfully direct (although, as with all modern cars, could do with a little more feel), and turning the traction control off reveals a playful (but easily controllable) rear end. There’s a touch more roll than we’d like – another MX-5 trademark – although the 2.0-litre is stiffer than the 1.5, and it comes with a limited slip diff to aid traction during hasty cornering.

The six-speed manual ’box is one of the best in the business, and really adds to the driving experience with its precise, snickety change. Meanwhile, although the larger-footed might find the pedals a tad close together, they’re ideal for practising your heel-and-toe technique on downshifts.

When Euro NCAP tested the fourth-generation Mazda MX-5 in 2015, it was awarded a total of four out of five stars for safety. It’s not that the Mazda is an inherently unsafe car, the organisation is just getting tough on vehicles which don’t offer autonomous emergency braking systems as standard.

All models come with front and side airbags as standard, while a £400 Safety Pack is offered on the top-spec 2.0-litre Sport Nav. This consists of high beam control, blind spot monitoring and rear traffic alert.

The popular Soul Red metallic paint is a £670 option on the MX-5, but it is one of our favourite colours for the roadster. Speccing Jet Black or Meteor Grey mica paint (both £550) give the MX-5 a more aggressive look (especially when combined with the Sport Nav’s gunmetal alloys), while a selection of white and silver options are also available for a more conservative appearance. The only standard colour choice is Arctic White.

The MX-5 line-up is fairly simple, starting with the entry-level SE model, which features air-con, 16-inch alloys and LED headlights as standard. We’d favour the SE-L Nav, which adds climate control, the desirable seven-inch infotainment system (incorporating sat-nav, DAB radio and the like), and a body-coloured inner door trim.

Currently, Mazda’s offering a special edition based on the SE-L Nav. The Arctic includes heated leather seats, automatic headlights, rain-sensing wipers and rear-parking sensors for a £800 premium over the SE-L Nav. Be quick, though, Mazda says it’s selling just 400 examples in the UK.

At the top of the range, the Sport Nav features keyless entry, a premium Bose sound system and a lane departure warning system.

At less than 4.0-metres long, the Mazda MX-5 is one of the smallest sports cars on the market.

Despite being one of the cheapest sports cars money can buy, the MX-5 is also extremely affordable to run. In 1.5 guise, it returns 47.1mpg on the combined cycle, and 40.9mpg with the 2.0-litre. While you’ll obviously struggle to see these figures under hard driving, the MX-5 is never going to be as thirsty as you may expect from a sports car as enjoyable as this.

Mazda servicing isn’t the cheapest, and servicing costs do vary depending on your dealer – so it could be worth shopping around. We asked our local friendly Mazda dealer in the South East and were quoted £199 for a first service, increasing to £279 for the second service.

Reliability ought to be excellent, as it’s a relatively simple car and Mazda continually does well in ownership surveys. Having said that, we’ve had a few minor issues with test cars - including rattles and bits of trim falling off.

What else can you buy for the MX-5’s £18,495 start price? The Toyota GT86 starts at nearly £8,000 more – even more than a top-spec MX-5, and you can’t even pick up a new Ford Focus for the price of the cheapest MX-5. A low list price translates into tempting PCP deals, too, with Mazda currently offering 0% APR if you can stretch to a 50% deposit.