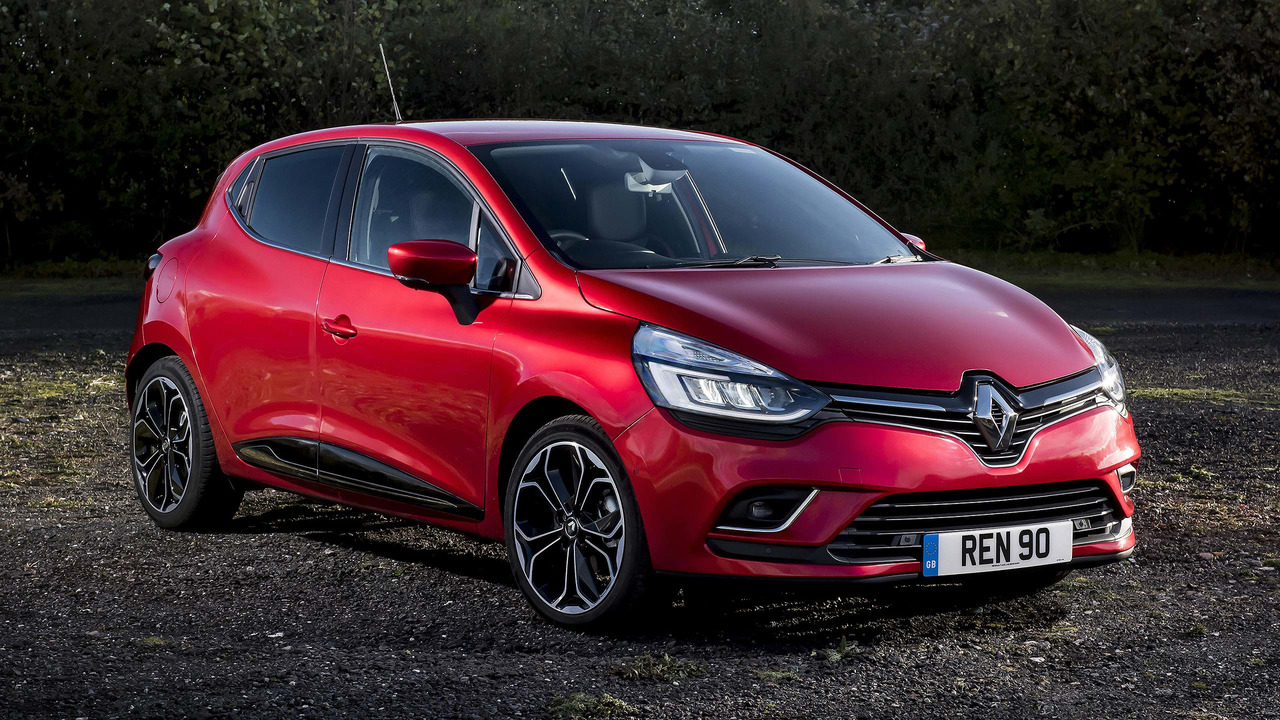 Still as popular as ever.

The Renault Clio is one of the best-looking superminis on sale, and its appeal runs more than just skin-deep. It’s pleasing to drive, has some interesting on-board tech, a decent range of engines and, inside, offers plenty of space and practicality despite its stylish appearance. Even with the strong internal challenge from the Captur crossover, it remains a popular car in the UK, for good reason.

Did you know? Renault introduced the Clio in 1990 and has sold over 13 million since then. It’s one of just three cars to win the Car of the Year award twice.

The latest Renault Clio is a strong-selling car that ticks the key boxes for supermini buyers: it looks great, is well-equipped, drives in a fun way and is cheap to run. You don’t have to spend a fortune to get a rich-looking Clio and the firm has democratised connectivity tech so nobody need miss out on the latest touchscreen features, even if it’s via your smartphone rather than an inbuilt screen. The engine range is small but there’s a clear standout and, apart from a dull interior, the still-disappointing hot Renault Sport performance model and safety kit that’s falling off the pace, the Clio remains a strong supermini contender.

The Renault Clio remains one of the smartest-looking supermini five-doors on the market. It’s curvaceous, with smoothly-flowing surfaces that are elegantly profiled, almost with sports car attitude in places. The rear haunches are particularly distinctive, and the profiling in the lower body sides is a Renault feature that emphasises the Clio’s squat, cheeky attitude on the road.

A small facelift came in 2016, which slightly tweaked the front end and introduced new LED running lights to the headlamps (crisp full LED lights are now optional). It’s a sign of how pretty this car is that not much needed to be done. The Clio wears its big Renault diamond logos with pride. Further distinction comes from a broad range of some pretty body colours, numerous exterior customisation packs and set of roof decals with matching door mirrors.

Compared to the fancy exterior, the interior design of the Clio is more mundane. There’s nothing seriously wrong with it, but it lacks the visual appeal of the outside, and all the expansive plastic surfaces seem a bit short on originality. Two things liven it up: a neat set of instruments buried in twin cowls and, on Dynamique Nav trim and above, a colourful 7in MediaNav touchscreen in the centre of the dash.

Standard colour schemes are unremittingly black, which is a bit too much and seems to cheapen the Clio; it’s plasticy, yes, but not too downmarket. Even the seat trims are almost universally all-black, and the synthetic part-leather on mid-range trims doesn’t help. Salvation comes with the upscale Dynamique S, which offers a red-coloured dashboard upgrade. Pity lesser Clios don’t have this too.

The Clio’s gloomy interior may not feel it, but it is pretty roomy. The front seats are firm and supportive, with a fully-adjustable driving position that’s much better than Renaults of yore. All models get a height-adjust driver’s seat and steering wheel adjustable for both rake and reach. A fairly commanding seat position gives OK forwards visibility, although it’s more restricted to the sides and, particularly, over the shoulder.

In the rear, a fiddly ‘hidden’ door handle opens up a cabin that, due to the small window openings, is rather on the dark side. This effect is reinforced by models with extra-tint rear glass. It is roomy enough though, with decent legroom and headroom. There’s enough space for two adults not to grumble too much, and three head restraints and three-point belts on all makes it family-friendly for three kids.

In line with the sector average, the Clio has a 300-litre boot with the seats up. It’s fairly deep and wide, and standard 60:40 split rear seats expand it to 1146 litres on all models with the seats down. It’s a pity the tailgate itself sounds rather cheap when you slam it, though.

Audiophiles, be wary of picking the optional Bose stereo upgrade. It reduced boot volume significantly, from 300 litres to just 230 litres.

The Clio is well served by technology, even on the value-priced entry-level models. Base Expression models cover the basics, with Bluetooth audio streaming, USB sockets - and, cleverly, a built-in universal smartphone cradle plus the R&GO application that ingeniously turns your smartphone into an in-car touchscreen. This is really clever: your smartphone screen displays four large app buttons that let you control phone, audio, smartphone navigation and even a fuel consumption trip computer. Renault deserves praise for developing this cost-effective solution to in-car connectivity.

Move up to Dynamique Nav and, as the name suggests, sat nav is standard, in combination with a 7in built-in touchscreen. The Navteq mapping is sufficient for most: an R-Link upgrade pack boosts it to TomTom touchscreen mapping with 12 months’ subscription to TomTom LIVE services. Fancy features include multimedia that displays album cover art and voice control via a button on the steering wheel.

It’s just a pity Apple CarPlay and Android Auto aren’t available, although Renault would argue its tech solutions are sufficient to make this unnecessary. We would disagree, given how useful the Apple and Android connectivity systems are: it costs Renault a point in an otherwise impressive tech performance for this sector.

The Clio is a pleasant, easygoing car to drive, with stable and engaging handling, a nice ride and a decent range of engines. It’s generally supple and controlled on all road surfaces, with a traditional French car ability to shrug off really bad road surfaces with integrity, and it deals with higher speeds pretty well too. Steering is a bit artificial but handling is otherwise eager and even the regular cars are fun to chuck about.

The disappointment of the range remains the Renault Sport 200 Turbo model. Renault used to be the hot hatch leader, but this model just doesn't measure up. It’s OK, with strong engine performance and a suitably sporty feel, but the spark and the magic of older hot Clios is lacking. It will never be a classic, even in upgraded, stiffened and extensively tweaked Trophy 220 guise.

We prefer lesser versions, within reason. The 1.2 75 non-turbo petrol is a pretty aged thing now, but the 0.9 TCE 90 is a much more impressive unit. It’s faster against the clock, has far more pulling power at much lower revs, and is generally an easier, nicer, quieter engine to use. It’s also almost 10mpg more fuel-efficient: unless saving money is all, choose this petrol engine.

The 1.5 dCi 90 turbodiesel alternative is a familiar Renault engine whose one-time advantages have been paired back by the 0.9 TCE. It still has appeal for those who want a really easygoing engine with lots of pulling power from low revs, though: it's actually quicker than the petrol against the clock, and much more fuel-efficient. There is a price premium but the big car punch you get from it helps some to justify it. We’d still stick with the TCE though, as it’s the Clio’s best all-round engine - preferable even to the 1.2 TCE 120 and 1.5 dCi 110 mainstream range-toppers.

Euro NCAP awarded the Renault Clio a five-star safety rating, but this was back in 2012 when standards weren’t as strict as they are now. It scored 88 percent for adult occupant protection, an impressive 89 percent for child protection and an apparently outstanding 99% for safety assist. Euro NCAP wasn’t as demanding in this area back then though: the Clio was praised for its standard ESC, something now fitted to all new cars, plus a speed limiter that’s part of the standard cruise control.

More modern active safety tech is notable by its absence. There’s no autonomous emergency city braking, for example, a feature Euro NCAP places great emphasis on these days. On paper, then, it’s impressive by Euro NCAP standards, but not as good as more modern cars.

Choose from 12 colours with the Clio, which are a mix of bold and understated. There are no fewer than four variations of white: Glacier White, Ivory, Arctic White and Pearl White. There are two blacks, either Diamond or Deep, plus Mercury light silver and Titanium dark grey. Modern Renaults look good in red and there are two choices: solid Flame Red or metallic Mars Red. Iron Blue is a striking metallic and you can have Liquid Yellow on the Renault Sport.

The basic Clio Expression has steel wheels and the smartphone cradle R&GO app instead of a full touchscreen. It also lacks air con, but does have DAB, Bluetooth, USB and engine stop-start. LED running lights are built into the lower bumper. Move up to Play and the spec is similar, but the all-important air con is now standard, as are 16-inch alloys, front fog lights and an engine designation badge on the bootlid.

Dynamique Nav trim is very popular, and very well equipped. The 7in MediaNav touchscreen looks good, and more speakers means the audio sounds better. Renault’s well-liked remote stereo controls are standard, as is the less well-liked hands-free keycard. There are auto headlights and wipers, electric body-colour door mirrors, more exterior chrome trim and gloss black inserts and a soft-touch dash instead of the entry-level hard plastic one. Pity the ‘leather’ steering wheel is synthetic rather than real, though.

The Clio is just over four metres long, so on the large side for a supermini (although it is only offered as a five-door). Width of 1732mm is more average and it’s a little under 1.45 metres tall. There was a time when the sportier Renault Sport models were wider than the standard car, thanks to their flared arches. No longer: the hot Clio is actually 1mm narrower than the standard car.

The Clio performs well on running costs, with the exception of the basic 1.2-litre model, which barely averages 50mpg. The far stronger 0.9 TCe 90 is considerably better on 60.1mpg, and you can get an ECO version with a smaller fuel tank, taller gearing and low rolling resistance tyres that ups it even further, to 67.3mpg and 94g/km CO2. That’s diesel-like.

Reliability is generally average for the Clio. It used to be below par, but the Nissan influence is rubbing off (the new Nissan Micra is actually built in the same factory as this Clio). There have been a few minor recalls, plus two regarding brake efficiency that affected around 70,000 cars.

Service intervals are slightly confusing. Renault recommends annual dealer checks, but oil changes are every 18,000 miles or two years. Brake fluid changes are recommended every three years, and spark plugs should be changed every four years.

An onboard service indicator gives a mileage countdown to the next service, which appears every time you start up. Renault offers several service plans that cover for regular maintenance: two years and 20,000 miles costs £299 and three years and 30,000 miles is £459.