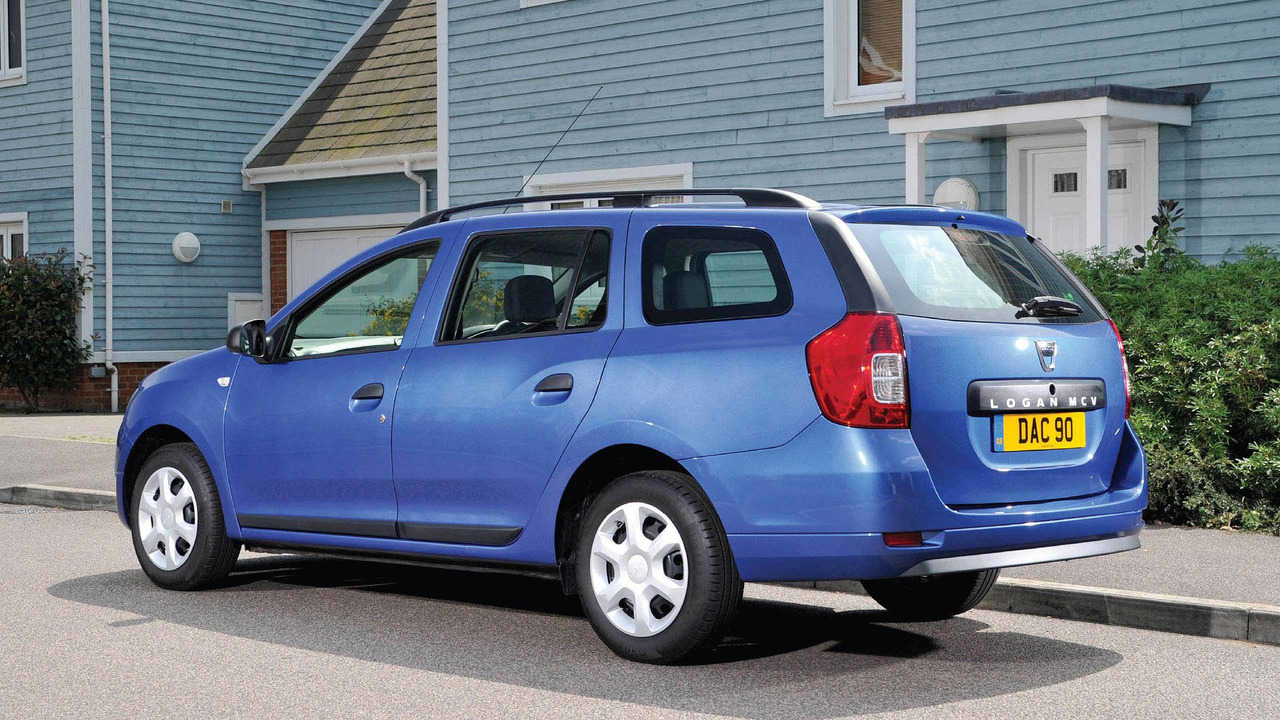 Built for nothing more than its sole purpose.

The Logan is an uncomplicated supermini-derived estate car built for drivers who want exactly that. It takes the Sandero, already more spacious than the average supermini, and adds an estate boot, increasing its load-lugging practicality and creating the cheapest estate car on the market by far. It shares a lot of parts with the Sandero, which is a bad thing for style but a good thing for reliability, and Dacia might argue that it’s the most practical everyday car on the market.

Did you know? The Logan MCV is broadly the same price across the range as the smaller but better-looking Sandero Stepway

Being so similar to the Sandero upon which it’s based, the Logan MCV shares many of that car’s strengths and weaknesses. First of all, it’s a huge amount of car for the money in purely physical terms, where its large boot and spacious cabin put it leagues ahead of any other lengthened supermini for value. On the other hand, it’s drab to look at, dull to drive and not particularly refined. Buyers looking for clever new technology should look elsewhere, too.

The Logan’s obvious resemblance to the Sandero supermini means that Dacia’s designers weren’t tasked with a tough job. Designing the Logan was a case of simply adding a few centimetres of length and flattening the back slightly. Boxy dimensions are there to provide as much passenger and luggage space as possible within a given footprint on the road, and what good would it do to add an elaborate or dramatic front end to this shape?

It has all the visual charm and charisma of a cheap potato salad, but the truth is that this is what plenty of buyers seem to want. For them it’s like dating for the elderly; looks don’t matter as much as lifestyle compatibility.

Steel wheels are standard on all models, so the Logan can’t match mainstream small estates without upgrades. At least the top-spec Laureate car has body-coloured door handles and mirrors. Ambiance models have black, bare plastic ones, and the cheapest Access grade even lacks wheel trims. It looks either terrible or no-frills charming, depending on your outlook.

For 2017, Dacia has given the car a mild refresh: LED daytime running lights at the front and cherry-coloured tail lamps. Subtle stuff, but you’ll spot the difference out on the road. It’s also worth noting that the cheapest Logan has body-coloured bumpers, unlike the equivalent Sandero.

The interior is unbelievably basic by 2017 standards. Plain, mid-grey plastic covers the entry-level dashboard and centre console, dotted with blank switches, simple plastic dials for air movement and round air vents in a feeble attempt to add style. On the most expensive models the console is upgraded with some shiny plastic surrounding an infotainment screen, but overall the layout couldn’t be more basic.

Better news comes from the seats, which are harder than Citroen’s latest efforts but softer than those you’ll find in German and Korean cars. They offer a good compromise for a wide variety of uses, from scratching around town to 50-mile motorway slogs. They’d need better under-thigh support and more padding for your lower back if they were going to be any better for long trips.

Clearly, the MCV, which stands for Maximum Capacity Vehicle, is built to carry more than the Sandero. Its boot is vastly bigger, which is great news for anyone who likes to pack heavy. A cabin based on low-rent materials and simplicity excels for practicality, too. Without the fear of damaging any expensive surfaces, the Sandero can become as utilitarian as you like. With the back seats down it’s a handy van, for instance, and 60:40 split rear seats are standard.

Urban parallel parking holds no fear when the worst-case scenario is scuffing a cheap wheel trim. The beauty of the Logan is that it’s a car you don’t have to worry about or fear for. It’s purely about utility and no matter how much you abuse it, it can’t lose too much value. If you can put up with the lack of comfort-related luxuries, the MCV lifts the weight of responsibility and worry that comes with buying a new car.

With the Logan you’re paying for size, not extra technology. The Access grade doesn’t have electrical power for anything other than the steering - not the mirrors, the windows or the central locking. There is no stereo, but there is pre-installed wiring to allow an aftermarket CD player to be slotted into the dashboard.

Further up the range there is remote central locking, manual air conditioning, electric front windows and a nice surprise in the shape of a well-featured stereo. It only has four speakers, but Bluetooth, DAB and USB compatibility almost match the very best in the class, except there’s no CD player.

At the top of the range there’s a touch-screen media interface that makes hooking a smartphone to the car much easier. There’s also cruise control, rear parking sensors and a seven-function trip computer. It’s hardly luxurious, but it ticks some useful boxes.

It’s hardly surprising that Dacia hasn’t troubled to provide a powerful engine. The turbocharged 0.9-litre TCe 90 is the best of the bunch for urban driving, but there’s a strong argument for the ancient 1.2-litre SCe 75 because it’s considerably cheaper to buy in the first place (and has been updated for 2017 with a bit more refinement and economy). All three engines vibrate when the revs rise, but the diesel is the worst. In fourth and fifth gears, full throttle makes the car shake in a way cars haven’t since the 1990s.

On the other hand, the Logan goes, stops and steers perfectly well, and for longer journeys like holidays and work trips the diesel perhaps makes more sense. It’s not exciting but nor is it incompetent. The car is happier around town than it is at high speed, but it carries out its daily duties without complaint. It’s well suited to patient drivers with no need to rush. Performance and handling aren’t significant factors when buying this car, so buyers should just pick the most appropriate engine for their usage patterns.

When a reversing camera, optional only on top-spec Laureate models, is the safety highlight, it’s safe to assume the Logan MCV will win no awards in this department. Laureate spec standardises height-adjustable seat belts, adding to the three height-adjustable headrests included with Ambiance, and all Logans get ABS with electronic brake-force distribution for safe stops.

The software and safety systems are taken from old Renault products, which means the Sandero gets stability and traction control, with hill-start assist to hold the car for two seconds after the driver lifts off the brake pedal, allowing them to find the clutch bite point before the car starts to roll back.

Elsewhere, the passenger-side front airbag can be switched off, there’s a warning for when the driver’s seat belt is undone, and there is a tyre inflation kit in lieu of a spare wheel. There is, at least, a warning triangle included as standard. The new Logan has also been upgraded with LED daytime running lights on all models, making it more visible.

Access models at least benefit from Glacier White bumpers to match the rest of the car, which, like the Sandero, is only sold in that colour. There are seven optional metallics for Ambiance and Laureate cars, some of which add something to the plain Logan’s style, and others of which don’t.

Cinder Red and Cosmos Blue are the brightest and best colours to apply to this car, giving it a little more character and making it look less cheap and cheerful. The ones to avoid are Mink, Chestnut and Pearl Black, which do the car no favours, while the pale silver Mercury and darker Slate Grey are an acceptable middle-ground.

Laureate is the top-spec choice for both models, bringing with it a lot of the features found on other, more expensive superminis - like body-coloured mirrors and door handles. A leather-covered gear knob is another addition, but the main feature of the most expensive Logan is its touch-screen sat-nav with UK and Ireland mapping. Western European mapping can be added for a price, as can alloy wheels.

Ambiance trim reverts to unpainted mirror housings and door handles, and uses a different 15in wheel trim. It maintains remote central locking, air conditioning and electric front windows, plus DAB radio, a USB port and a light in the boot, but loses access to some of the optional extras exclusively reserved for the Laureate.

Access is a remarkable trim level insofar as there is no other car on the market that has so little standard equipment. The lack of a stereo is unheard of these days. The basic car is cheap, but it’s no more than a four-wheeled box with a primitive heater and anti-lock brakes. Buyers looking to use the Logan as a very effective cut-price van might love it, though.

The Logan is almost half a metre longer than the Sandero, and all that length is at the back. Its body is wider than many superminis by a couple of millimetres, but that helps it feel as spacious as it does. All but the smallest garages should swallow the Logan without any trouble, and the extra height of the roof bars still won’t cause any issues in car parks.

You’d be forgiven for thinking that the Logan’s extra length would add loads of efficiency-spoiling weight, but not so. It’s just 11kg heavier than the Sandero. Age-old technology and relatively low weight of 969kg for cars with the simplest SCe 75 engine mean that fuel economy is more or less as good in the real world as most other superminis. The official figures state that an average of 52-57mpg should be possible in the petrols, although in real life it’s more like mid-40s with a mix of driving.

The diesel, on the other hand, is outstandingly efficient, at least on paper. Stop-start is fitted as standard and helps it on the way to an official 80.7mpg. A realistic benchmark to aim for is 65mpg, but with a lot of town driving that will drop below 50mpg.

Depreciation is a major card in the Logan’s favour. A car costing so little in the first place has less to lose over the longer term, so finance is affordable. It’s a peerless long-term cash-saver among its supermini estate rivals.

There’s so little to go wrong in the Logan that both it and the Sandero do very well in reliability surveys. Most of its parts have already spent long lives in Renault cars, having the majority of their faults ironed out, so Dacias are actually proving to be more reliable than new Renaults. The Logan itself is one of the most reliable estates in Europe.

Dacia has priced the Logan with a £1000 premium over the Sandero, starting from just £6995 - cheap enough to force you to double-take. That price includes three years and 60,000 miles worth of warranty, which is extendable up to seven years and 100,000 miles. It’s tough to see how anyone could ever offer better value - as long as luxury and equipment aren’t priorities.

Ambiance models, with air conditioning and a few of the bits and pieces most people really wouldn’t want to do without, starts from only £7995, rising to £8795 for the perky turbocharged petrol and £10,195 for the diesel. Clearly, the strongest financial case falls for the basic SCe 75 engine.

Laureate trim only uses the two turbocharged engines and starts from £9995. For the diesel it’s £11,395, which is still cheaper than most superminis’ entry prices and is, perhaps not coincidentally, exactly the same price as the ruggedly-styled Sandero Stepway. Buyers can therefore choose form over function if they wish, or vice-versa.