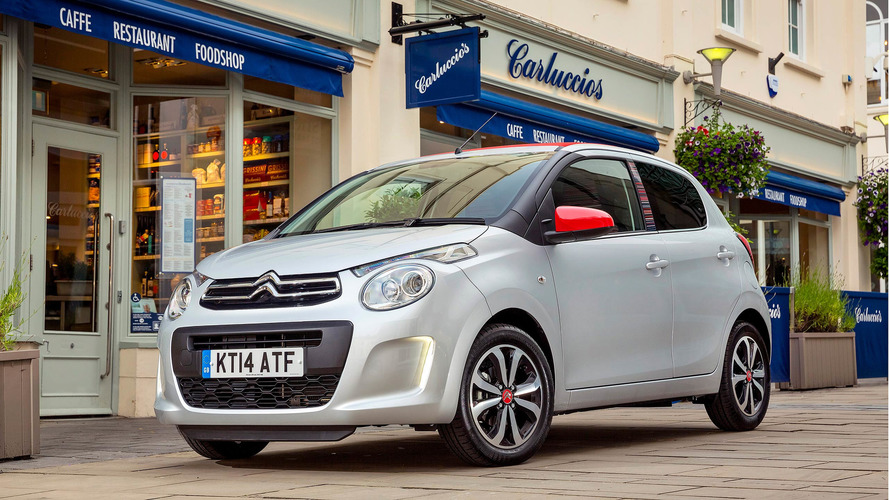 Launched in 2014, the Citroen C1, Peugeot 108 and Toyota Aygo are the product of a city car collaboration between three car companies. Available as a three- or five-door hatchback, or an Airscape version with folding fabric roof, the C1 is funky-looking, with a plethora of personalisation options. As a sub-£10,000 city car, its rivals include the Fiat 500, Renault Twingo, Skoda Citigo and Hyundai i10.

Did you know? The Citroen C1 is built alongside its cousins, the Peugeot 108 and Toyota Aygo, in the city of Kolín, Czech Republic.

The Citroen C1 is a small car with a cheeky face that’s cheap to run and competitively priced. With its thrummy three-cylinder engines, it’s not the most refined runabout on the market and it doesn’t scream quality. But if you like to personalise your pride and joy, and rear-seat space isn’t such a big issue, then the fun and funky C1 could be for you.

Small cars don't get much cheekier than the Citroen C1, especially at its front end where the grille, air intake and two-part headlamps with integrated LED daytime running lights create a smiling face.

Elsewhere, its simple lines form a cute, compact profile, while at the rear there's a glass tailgate, integrated spoiler and distinctive square light clusters. Available as a three- or five-door, both work equally well aesthetically, so we suspect it will come down to whether the rear seats are in regular use or not. If there's a comparison to be made with its cousins, the Peugeot 108 and Toyota Aygo, in terms of looks, the C1 is definitely the most fun of the three.

The C1 is also available as an Airscape, with a large canvas soft-top running practically the entire length of its roof. Electrically controlled as standard, the switch is located in the ceiling panel and the roof can be opened or closed when the car is driving – even at legal motorway speeds.

An aero-acoustic deflector deploys when the roof is open to keep noise and turbulence at bay. Naturally, the roof is available in a choice of three colours – Sunrise Red, Black or Grey – to contrast with the chosen body colour.

At just 3,466mm long, 1,615mm wide and 1,460mm high, the C1 is compact enough to get in and out of parking spaces and through tight streets without any trouble.

Inside, the C1 continues the funky theme, but the cost savings are all too apparent, with acres of plastic – albeit coloured in some cases.

The doors don't have a satisfying clunk either. In short, it's all a bit basic, but well put-together and not without its charms.

The seats are comfortable, but it's worth remembering that the entry-level 'Touch' trim doesn’t have a height-adjustable driver's seat. Also, the steering wheel only adjusts for height (not reach) throughout the range.

The dashboard is dominated by a big speedometer incorporating an LCD display, which highlights info such as fuel consumption. An optional digital rev counter can be mounted to the left while the right side flashes two green arrows to notify when it’s time to change gear. The small centre console features a DAB radio as standard and a seven-inch infotainment screen from mid-range Feel trim upwards.

There are storage compartments throughout the cabin, plus cupholders and a glovebox.

The modest 196-litre boot can’t match rivals such as the Skoda Citigo and there is a fair loading lip to lift items over. However, folding the rear seats increases load capacity to a more impressive 780 litres. A rear bench seat is standard on the entry-level Touch, but you get a 50:50-split/fold seat from Feel trim upwards.

The rear seats are cramped and taller passengers may struggle for headroom, while there are only pop-out windows in the back. In theory, it could sit five people (three small ones in the back), but four is more realistic. All-round visibility is very good.

There are five C1 trim levels – Touch, Feel, Furio, Flair and Flair Edition – and the level of tech equipment is dependent on which one you choose.

Feel adds a speed limiter, air conditioning and a DAB seven-inch infotainment screen. This incorporates Mirror Screen, which means you can connect your smartphone, and (if you download the app) it will ‘mirror’ your phone’s screen on the dashboard (Apple and Android devices only). Finally, Flair adds a rev counter and reversing camera.

Both come with five-speed manual transmission, although the VTi 68 gives you the option of the five-speed automatic ETG (Efficient Tronic Gearbox).

If you like a thrummy three-cylinder in a small car, the C1 won’t disappoint. Noise suppression is not the greatest with either engine, so you are well aware of what’s up-front. On that basis, the 1.2 is probably the best all-round engine because it has more power, doesn’t have to be worked so hard and is therefore a little more refined.

Frankly, both engines feel adequate in a car weighing just 855kg. As you’d expect, the C1 is agile around town and quite good fun to drive. The ride is fairly supple and it can become a bit bouncy if pushed, but body-roll is well controlled. The steering is light, too.

The C1 was awarded a reasonable four out of five stars by Euro NCAP when crash-tested in 2014. It comes with a pretty good list of safety equipment, including anti-lock brakes, electronic braking assistance, electronic stability control and hill-hold assist, which holds the car stationary for two seconds for an easy re-start on slopes with a gradient over 3%. There are also six airbags and two rear Isofix mounting points as standard.

Personalisation is one of the Citroen C1’s strengths and there are plenty of ways to make your car look distinctive.

Airscape versions can also be specified with a contrasting colour for the convertible roof. For the interior, there’s a range of Colour Packs available featuring a colour-coded dashboard centre, air vent surrounds and gear lever base.

Different wheel trims and alloy wheel types are also available, plus four eye-catching roof design options, including a Union Jack and a chequerboard.

The three-door Furio is meant to appeal to younger drivers wanting a sporty look, but who don’t want to pay a premium for a more powerful engine. Based on the Feel trim level, it benefits from black 15-inch alloy wheels and bold exterior graphics, plus Sunrise Red door mirrors and wheel centre caps to provide an eye-catching contrast to the Lipizzan White or Carlinite Grey metallic paint options. A rear diffuser and centred exhaust outlet complete the sporty look.

As ever, if you can stretch to the top-spec Flair or Flair Edition, those extras are good to have, But Feel trim covers most of the basics and a few more, leaving you more money to customise your C1.

The C1 is roughly the same size as its city car rivals including the Renault Twingo, Peuegot 108, Suzuki Celerio, Skoda Citigo and Fiat 500. Nipping around town and parking is a doddle in the little Citroen.

Naturally, the Citroen C1 is also cheap to insure, ranging from as low as group six, to group 12 for the top-spec Flair Edition.

The C1 is covered by a three-year warranty, plus 12-year anti-perforation and three-year paint warranties. However, the main warranty is restricted to 60,000 miles, which is short compared to some rivals such as the Renault Twingo (four years/100,000 miles).

At the end of the three-year manufacturer warranty period, you can opt for a one- or two-year extended warranty, which starts from £313.

You’ll need to get your C1 serviced every 12 months or 10,000 miles, whichever is soonest. A Citroen Servicing Package is available, enabling you to pay in advance for servicing for three years/35,000 miles.

In the 2016 Auto Express Driver Power owner satisfaction survey, the C1 came 71st out of 150 cars for reliability – below the similar Peugeot 108 and Toyota Aygo.

However, it should be remembered that in 2014 the previous-generation Citroen C1 was named Britain's most dependable car by Which?. The C1 scored an almost perfect 99.3%, beating higher-priced alternatives such as the Mercedes-Benz E-Class to scoop the award. The 2014 Which? Car Survey asked members of the consumer group and other motorists to rate how their car performed for reliability and all other mechanical faults.

The Citroen can’t compete with the likes of the Dacia Sandero and Suzuki Celerio on price, but it’s one of the few city cars in the sub-£9,000 category.

Starting at £8,715 for the entry-level Touch and ending up with Airscape ‘Flair’ at £12,995, it does represent good value for money. However, as with all cars offering a list of personalisation options as long as your arm, you’ll need to go easy or you could end up paying supermini money for a city car.

If you can stretch to it, at least go for the Feel grade, which is one up from the basic Touch. You get essentials like a height-adjustable driver’s seat, and it unlocks access to other optional extras such as electrically-adjustable heated door mirrors and styling packs. 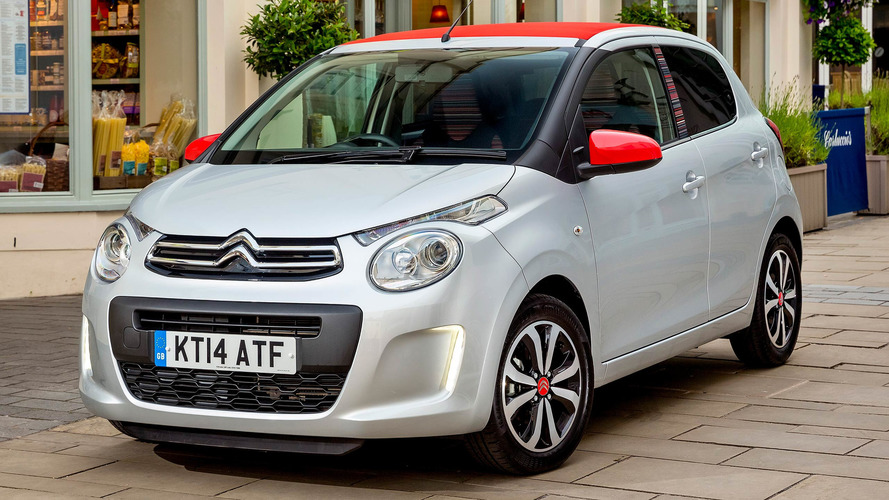