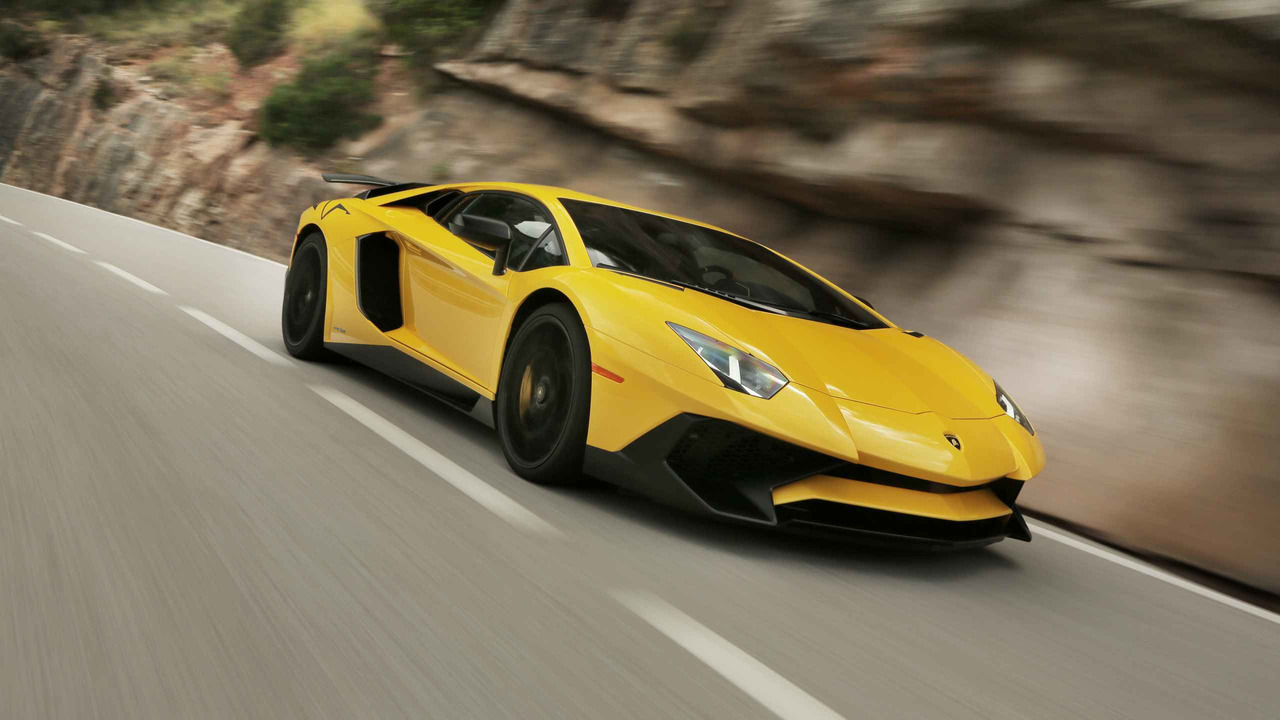 A carbon tub, 700hp from a glorious naturally-aspirated V12 engine and looks so sharp you could cut yourself with them; the Aventador had it all when it was launched in 2011. That was then, but the supercar world has moved on, and Lamborghini has come back fighting. The result? The Lamborghini Aventador S, an Aventador that’s been brought bang up to date. There’s now rear-wheel steering and while the engineers were at it they’ve also upped the downforce and liberated a useful 40hp from the 6.5-litre V12 that so defines the big Lamborghini experience. It’s enough to not just keep the Lamborghini relevant, but fighting fit, not least as it’ll keep running away from its mere 200mph opposition with its 217mph top speed. To go any faster you’ll need a hyper as opposed to a ‘mere’ supercar. That’s always been the Lamborghini way, but now it’s backed with a bit more sophistication.

Did you know? A grey Lamborghini Aventador starred as Lockdown, a Decepticon bounty hunter in the 2014 Transformers film Age of Extinction.

A supercar that’s near hyper in its performance, the Lamborghini Aventador S is very much in keeping with flagship models from the stable of the raging bull. The changes that created the S allow it to match and better its contemporaries, the Aventador S a beguiling mix of modernity and sophistication with a large portion of Lamborghini lunacy. Hugely dramatic, it has presence that’s way in excess of any of its rivals'. Indeed, that’s even more so now with its serpentine 'fangs' and restyled rear wheel arches that came with the boost in power and improved dynamics that define the S. Hilarious, riotous, and so damned appealing, the Aventador S might be a Lamborghini that can rival the very best of its competition, but it very much does so on its own terms. And you’ve absolutely got to love the company for that.

This is a V12 Lamborghini, which means the Aventador has some pretty serious styling boots to fill. Its lineage includes arguably the most beautiful supercar ever, the Miura, which stepped aside for the dramatic Countach, itself followed by the Diablo, then Murcielago and the non-S Aventador before it. Does the Aventador S deliver? You bet it does, in a way that only Lamborghini can pull off without looking cartoonish or overblown - the Aventador S is an absolute visual feast of lines, curves and edges, very much defining what you’d quickly scribble if asked to describe a supercar shape. It's a wedge, impossibly low at the front, the cabin squeezed between the huge front wheels and the engine, the V12 defining its form by requiring lots of cooling and combusting air - the space inside is seemingly an afterthought. It's big, low and wide, the Aventador S adding some snake-like fangs to the front, the serpentine look working well with the geometric headlights and pent-up aggression that the big V12 Lamborghini exudes. The huge rear wings, the vast air intakes, and slatted engine cover and sophisticated-looking rear lights are all pure drama. Nobody does supercars like Lamborghini, and the Aventador S, despite being a re-hash of a car that’s been around long enough to become familiar (as much as 200mph supercars can be described as such), is Lamborghini very much playing its A game. Brilliant.

Like the exterior it’s all about the drama inside. You look out through an impossibly narrow windscreen, while the view out back is non-existent, though in reality you’ll only need to worry about what’s behind when the lights are flashing and blue. The instruments are like something from Tron, the big screen displaying all manner of information, from the gear you’re in, to the revs you’re pulling, and speed too. That latter one will always be a big number.

There are whiffs of Audi smattered around the interior, the satnav borrowed from its German parent, its conservatism somewhat at odds with the Lamborghini’s otherwise bonkers vibe inside. Getting in is pure theatre, the doors hinging upwards and forwards, which is all part of the utter joy of the big V12 Lamborghinis, right back to the Countach. For all its drama, the interior actually works pretty well, even if there’s the odd ergonomic quirk, but that’s nothing out of the ordinary for a 200mph wedge of excessive silliness, and given its singularity of purpose it’s surprisingly comfortable. That’s relatively speaking, of course.

Yes you can connect your phone, stream music and all the stuff that you might want to do via your phone. Really though, chuck it in the glovebox, forget about music or making calls and enjoy the sound of a 6.5-litre V12 doing its thing just a few inches behind your ears. You don’t buy a car like the Aventador S with any thought to connectivity and suchlike, though it’ll cover the basics if you need to make a call.

Lamborghini has taken the basic elements dished up by the Aventador before it, and bits from the SV too, and created the S. There’s emphasis on agility as well as performance, so the chassis revisions are way more significant to the Aventador S than any increase in power. The actual rise is relatively modest at just 40hp, though when the total output is 740hp the Aventador S is in rarefied company, that output demonstrating just how rapidly supercars have developed in the last 10 years or so. So it’s quicker, but it’s more about how the Aventador can carry its so easily gained pace.

Key to the changes is the rear-wheel steering. It seems everyone’s currently adopting it, the ability to turn the back wheels bringing benefits to both agility and stability, and the system changes the direction it turns the rear wheels at different speeds to either virtually shorten or lengthen the wheelbase. The results are obvious, as the S is keener to turn into a bend, yet feels more stable at high speeds. That confidence in it is aided not just by the effect of that trick rear axle, but the fact that the steering itself offers fine weighting and real feel at its rim. All that new-found agility is matched to some new driver control systems, Lamborghini giving the opportunity to pick individual elements of its various systems under the amusingly titled Ego setting. That means you can have all the brutality of the Corsa setting without the savage gearshifts or the suspension dialled back a touch, which again allows the big V12 to better use its performance.

Grip is mighty, traction too, it feeling predominantly rear-driven despite the four-wheel-drive system pushing drive to the front axle when it's needed. There’s an increase in downforce too, the aero kit contributing to a claimed 130 percent increase in downforce at 150mph over the previous version. The engine itself remains mighty, and absolutely core to the Aventador S’s allure. It revs with a savage intensity, reaching 62mph in 2.9 seconds and double that in just 8.9 seconds, the lighter exhaust liberates even more glorious sounds from it as it’s doing so. The power is seemingly unerring in its force, though it's a shame that Lamborghini persists with the ancient single-clutch gearbox that feels crude in comparison to the best dual-clutch systems out there. It’s the Aventador S’s biggest failing, and one we’d hoped would have been addressed when the S arrived, but Lamborghini keeps rolling out the packaging and weight excuse for now. It’s a small hiccup in what’s otherwise a compelling package, which feels far more sophisticated and polished as a result of Lamborghini’s enhancements, without doing anything to dilute the enormous drama that defines the Italian firm’s cars, and V12 flagships in particular.

There’s a carbon-fibre tub to begin with, and the lightweight, stiff structure is not just to the benefit of performance, but safety, too. Huge brakes with ABS and EBD, traction and stability control should all help you avoid an accident. Should you be unlucky enough to have one there’s an adaptive passenger airbag with automatic occupancy detection, a collapsible steering column, a driver’s dual stage airbag, a passenger knee airbag, side airbags, seatbelt pretensioners, a tyre pressure warning system, and predictive pedestrian protection. Pretty safe then, for a madcap V12 supercar, and the sort of stuff the chap at the start of The Italian Job in his Miura could only have dreamed of - and wished he’d had.

White, yellow and black make up the standard colours, with two three-layer options of Arancio Argos and Arancio Atlas (copper and bronze), six standard metallic hues and three more Ad Personam colours of green, red and blue. Lamborghini will paint it any colour you like though, and with the Aventador S we’re all over the brighter, more vivid hues - the riotous shape lending itself well to a wild colour.

There’s one, presently, but it’ll not be long before there’s another SV or suchlike, as the previous Aventador had a number of spin-offs, the coolest being the Miura-aping specials, which matched their paintwork and wheels to Lamborghini’s first supercar. The S comes well equipped, but at this level the expectation is you’ll want to spend a good deal more personalising it to exactly your requirements, and Lamborghini will only be too happy to oblige.

It’s going to cost you lots and lots of money to run the Aventador, but then you knew that didn’t you? If you didn’t go and have a word with yourself, buying a V12 Lamborghini would be cripplingly expensive to the merely comfortably off, but for the super-rich buyers it attracts none of this is likely to ever be an issue, or even a consideration. Lamborghini quotes 16.7mpg on the official combined cycle, so expect single figures, while it emits more CO2 than the Space Shuttle did on take-off (maybe).

Nine stars? Have we lost leave of our senses? Not one bit. Look at what the Aventador S competes against and the circa £270,000 it’s costing you - before you’ve ticked a few choice options - looks like a bargain. A Koenigsegg or Pagani will cost you in excess of a cool million, the Sant’Agata Bolognese the supercar price equivalent to a simple plate of its hometown named sauce and spaghetti compared to its rivals’ Beluga caviar with a Wagyu beef side and a kilo of truffle shavings.