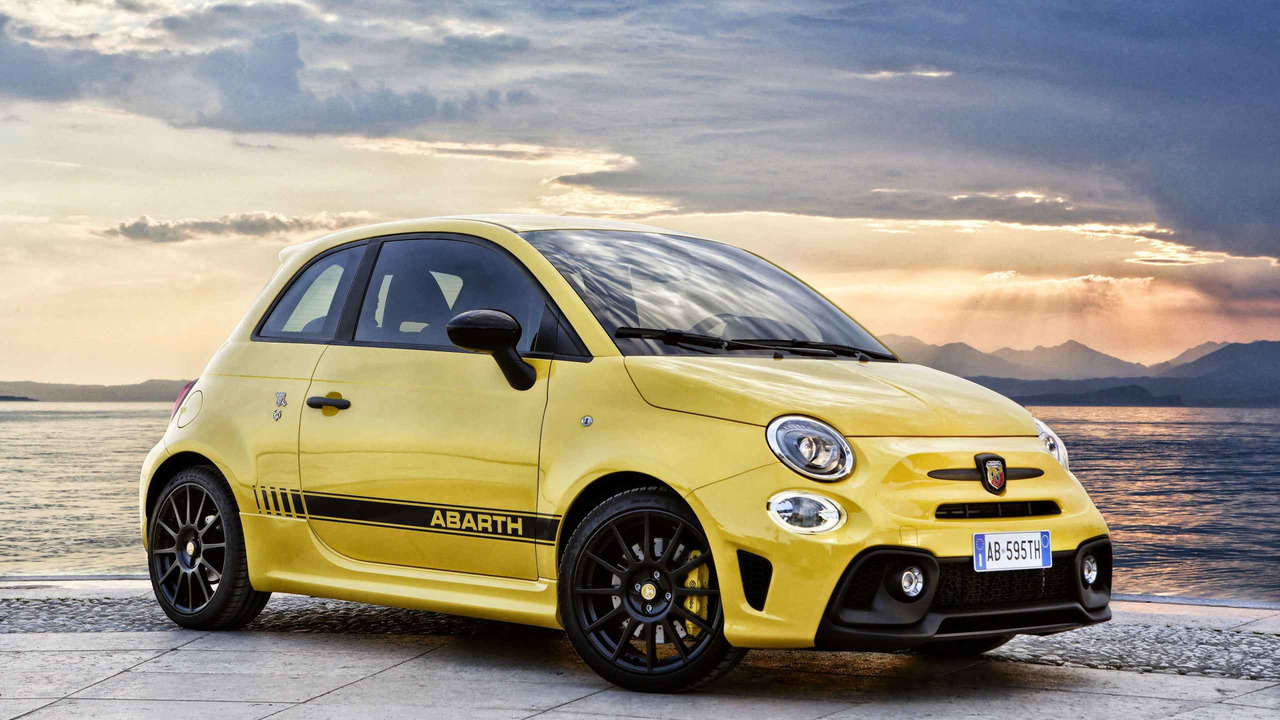 Abarth is to Fiat what AMG is to Mercedes-Benz or the M Division to BMW, taking familiar production models and adding a little bit of heat. The Abarth 595 is based on the Fiat 500, which can be had in mild, warm or hot specifications - called 595, 595 Turismo, and 595 Competizione. Their outputs are 145hp, 165hp, and 180hp respectively, all from a turbocharged 1.4-litre petrol engine. A rambunctious, cheeky and quick little hatchback, it’s outclassed by many compact hot hatches, but few dish out as much fun despite its many flaws.

Did you know? Abarth founder Carlo Abarth’s birth sign of Scorpio is why the company’s badge is a stylised scorpion.

Giving the Fiat 500 a shot of heat, Abarth takes the cutesy city car and adds some real attitude. It’s fun, if imperfect, but that’s all part of the Abarth’s charm, though in its most powerful variants it becomes increasingly difficult to ignore its shortcomings against competition like the Mini Cooper Works and other feisty, rapid small hatches such as the Ford Fiesta ST. The 595’s size is another problem, particularly at the prices Abarth asks for it. Most rivals are bigger, as quick, and more capable for either the same or less outlay. None offer the outrageous looks or ooze quite the same sense of fun though, which, allied to its many flaws, is arguably part of its appeal.

Cute isn’t it? No surprise really given the Fiat 500 basis, but the Abarth does rather look like a Disney Pixar interpretation of a 500, with overblown bumpers and their large air intakes, big alloy wheels, and plentiful options to add extra graphics. That is definitely not a criticism, though, as we rather love it. Those cartoonish proportions make the 595 stand out in any company, be it alongside its direct rivals or Italian aristocracy like a Ferrari. Indeed, the Abarth 595 is perhaps the perfect tender car for your garage full of Ferraris or Lamborghinis, an Italian bundle of chaotic fun that’s brimming with vim and character, that’ll make even the most mundane of drives a bit of a giggle.

If the exterior is dripping in friendly, retro character then the interior positively reeks of it. The standard 500’s cabin is throwback inspired, clearly laid out and cheerful, while the 595 dials up the sporting appeal a notch or three. There are more deeply bolstered sports seats for a start, while Abarth does a good job of disguising the 500’s sometimes cheap-feeling interior by chucking some leather and carbon fibre around the cabin. The driving position isn’t great, though, being rather upright and cramped, and your feet are tight on the obligatory alloy pedals. The chunky-rimmed steering wheel has the Abarth scorpion badge in its centre, too, as if all the other enhanced trim pieces weren’t enough to make you realise that this is no ordinary Fiat 500.

All those interior upgrades cannot hide the fact that, proportionally, a Fiat 500 is exactly what the Abarth 595 is. It’s tiny in there, the cabin narrow, the boot small, and the rear seats insufferable for all but the shortest of adults. That’s exacerbated if you specify the hard carbon-backed sports seats, which, while looking great, limit access to the rear even further. The boot is pretty tiny, too, at just 185 litres, though the two rear (no third seat in the back) seatbacks do fold to increase luggage space to 550 litres. Do that and the floor isn’t flat, and the access to it is still pretty limited.

All 595s come with the same uConnect system you’ll find in upmarket 500s, here with the five-inch touchscreen as standard, DAB radio, Bluetooth with eight speakers, audio streaming, and USB and aux-in connections. There are hands-free controls on the steering wheel for all of the above, while all 595s get uConnect’s Live services, too. You can upgrade all that optionally to include navigation, likewise there’s a seven-inch version containing all that and adding HD, while the 595 options list also includes the opportunity to add Apple’s CarPlay or Android Audio systems, as well as a 480W Beats audio system, which upgrades all the speakers and adds a 200mm subwoofer. Given the pricing we’d rather hope satnav was at least a standard part of the kit list, likewise CarPlay and Android Auto smartphone mirroring - especially given the youthful clientele the 595’s likely to attract.

Given the 500 it’s based on is a little bit bouncy on all but its smallest wheels and tyres, it’s no surprise that the 595 is a bit busy in the handling department. The biggest 17-inch alloys do compromise the ride, though even the 16-inch rims on the 145hp 595 make for a somewhat pogo-like experience on anything other than glass-smooth tarmac. Opt for the 165hp Turismo and you benefit from Koni dampers on the rear, while the Competizione adds some front Koni dampers into the mix, as well as some cool Brembo brakes. Even the range-topper struggles to really shine in the bends, as the steering lacks feel, and none ever really settles down on rough UK roads, though that does, admittedly, make you feel like you’re going faster a lot of the time than you actually are.

The manual gearbox is preferable to the paddle-shifted robotised sequential auto, and its shift is decent enough. The engine is surprisingly keen on revs given its turbocharged nature. Even with the standard exhaust it’s tuneful, and the 145hp model is brisk, with a 0-62mph time of 7.8 seconds - that auto adds a couple of tenths to that for an 8.0-second time. The Turismo drops that 0-62mph sprint by half a second, while the Competizione’s 180hp manifests itself with a 6.7-second 0-62mph time and the frankly terrifying prospect in this tiddler of a 140mph maximum speed. The range-topper does benefit from the option of a Performance Pack, which adds a mechanical limited-slip differential as well as 17-inch supersport alloy wheels and Sabelt Abarth carbon fibre backed sports seats. That differential helps the 595 Competizione put its power down a little bit more effectively, but adding it brings even more expense, pitching the range-topping Abarth into competition with some very impressive supermini-sized rival hot hatches, most of which offer a far wider breadth of ability - if not the Abarth’s cheeky charm.

The Fiat 500 was tested by Euro NCAP back in 2007 and got a five-star score for adult protection and three for children. Things have moved on in ten years though, so don’t expect the 595 to protect you quite as well as the best of its newer rivals. Standard safety equipment includes front driver and passenger airbags, a driver knee bag, side and window airbags, ABS with electronic brake force distribution, electronic stability control, traction control, and tyre pressure monitoring. Given its age it’s little surprise there’s none of the more sophisticated autonomous emergency and safety features some of its newer rivals can offer.

A list of evocatively named, and sometimes retina-straining, colours is offered in single tone or bi-colour choices. The Abarth 595 works well in its more extrovert tones like Modena Yellow or Abarth Red, particularly if you go to town with the optional livery packs that add Abarth decals. The bi-colour choices are a bit too try-hard even for the gregarious Abarth, though the grey and red combination works well if you must… You can paint your brakes a variety of colours, too, while there’s a choice of nine different 17-inch alloy wheel designs or two 16-inch selections for further personalisation.

The standard 595 is the 145hp model, with the Turismo seeing the power rise to 165hp, while the Competizione heads the line with 180hp. There’s hatchback or cabriolet versions of all, though we use the word 'cabriolet' loosely, as it’s really little more than a large canvas sunroof than a proper drop-top. Occasional specials are offered, such as the XSR Yamaha, which links to Fiat’s MotoGP team sponsorship.

The Abarth 595 is not particularly cheap to buy, while a service interval of just over 9,000 miles isn’t great these days, either. Insurance will be high, too, given its sporting nature. It matters not one jot which power output you choose, as all, from the 145hp to the 180hp model, officially return the same 47.1mpg in manual guise, or 48.7mpg with the sequential robotised automatic transmission. There’s a drop in emissions for the auto (134g/km against the manual’s 139g/km rating), though that’s not enough to have us recommending it here. Residuals will be okay, if not as strong as the likes of a Mini; the Abarth appeals to a smaller audience than most of its rivals, which affects its future values.

You’re unlikely to be doing big miles in these, but even so, sub-10,000-mile service intervals are a pain.

The Abarth is pretty special, but you pay for it. The range in pricing puts it up against some serious supermini hot hatch competition, cars like the Ford Fiesta ST falling within the Abarth’s price range, and that's a significantly better car to drive. More spacious, too. Start looking at Minis and the Abarth makes even less sense, but then it’s kind of one of those cars; if you want one you’ll buy one and be damned with the costs, as looked at rationally it’s pretty difficult to see it stacking up sensibly against any of its rivals.