The CX-3 is Mazda’s entrant in the highly competitive compact crossover class. Based on the Mazda 2 platform (but longer, wider and higher), it originally went on sale in the UK in the summer of 2015 and rivals include the Nissan Juke, Renault Captur, Honda HR-V and Audi Q2. There’s a choice of two efficient petrol and diesel engines, which, combined with lightness and nimble driving dynamics, make the CX-3 definitely worth considering.

Did you know? The Mazda CX-3 was named ‘Best Crossover’ at the 2015 Scottish Car of the Year Awards and Best Compact SUV at the 2016 Fleet News Awards.

The distinctive, upmarket Mazda CX-3 is one of our favourite small crossovers. Not only does it look different, but it’s a great all-round package, too. Fun to drive, well-built and practical, it’s available with strong SkyActiv petrol and diesel engines and lots of kit. Priced from £17,795, the 105hp 1.5-litre diesel version is particularly frugal, returning up to 71mpg with CO2 emissions of just 105g/km. And unlike some crossovers, the CX-3 is available with four-wheel drive. 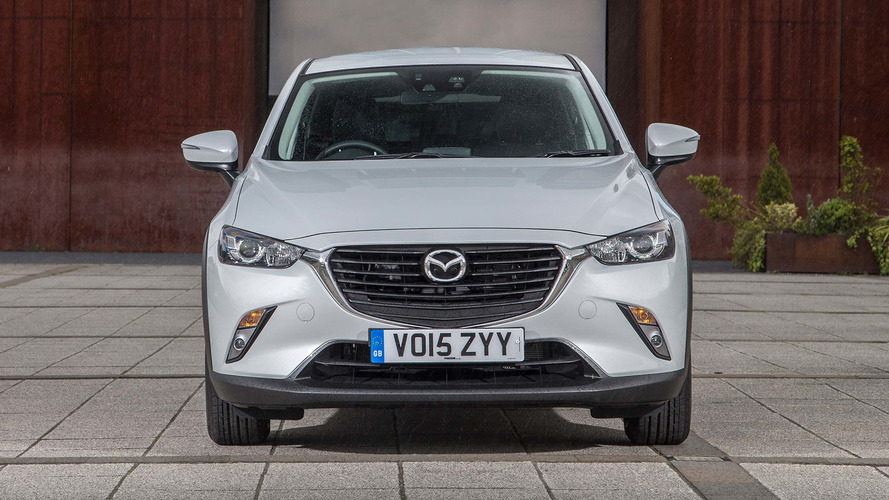 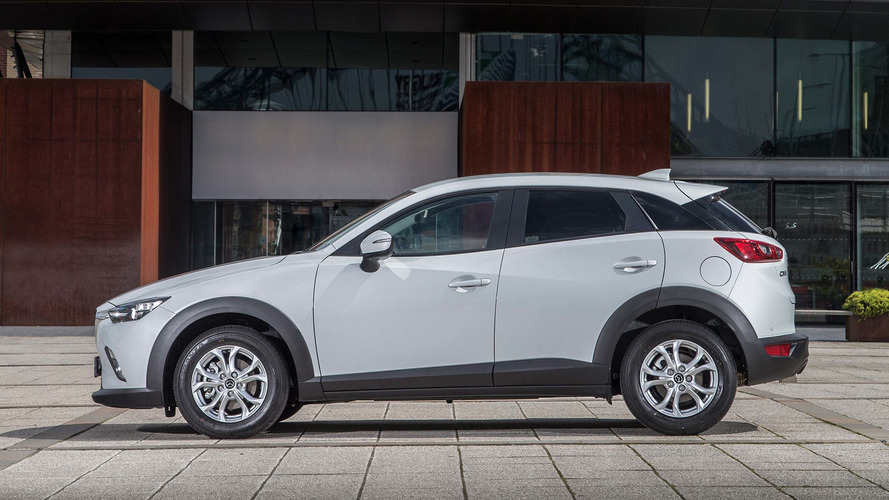 The Mazda CX-3 certainly stands out from the crowd. Mazda’s ‘Kodo’ design language apparently takes inspiration from the power and agility of a wild animal as it pounces on its prey. The CX-3 features a striking front end with a long bonnet, while its sweeping A-pillars, short overhangs, large diameter wheels and high waistline, give the CX-3 a coupe-like profile and sporty stance. However, with ride height 50mm higher than the Mazda 2 hatchback on which it’s based, the CX-3 offers a commanding view of the road – as favoured by SUV customers.

Like all Mazdas, the CX-3's cabin has a classy, yet driver-focused feel. Its well-laid-out interior is similar to the Mazda 2, but with a 50mm higher eye line for the driver.

A seven-inch colour touchscreen dominates the centre console. It incorporates DAB radio and can pair with your smartphone to deliver internet connectivity. A rotary controller sits behind the gear selector, along with a separate volume dial, meaning there’s no need to reach for the touchscreen all the time (as with some cars).

The CX-3's cabin is comfortable, too. The steering wheel has reach and rake movement, while the driver’s seat can adjust for height.

There’s a fair amount of space in the CX-3 and it compares pretty well with the opposition. However, taller rear passengers might struggle for space, especially headroom – the price to pay for that sporty profile. That said, visibility all-round is good.

The CX-3 has 60:40 split-folding rear seats and a flexible ‘cargo board’ boot floor. With the cargo board in its lowest position and the rear seats in place, there are 350 litres of boot space (less if you opt for the Bose sound system), which is 95 litres more than the Mazda2. With the rear seats folded, luggage space jumps to 1,260 litres.

Flip the cargo board into its highest position and it provides a separate hidden space beneath, which is useful for storing small, fragile items.Loading via the rear hatch is easy – the opening is high and there’s a shallow load lip.

Elsewhere, there’s a good sized glovebox and door bins, while cupholders are located behind the gear selector in the centre console. 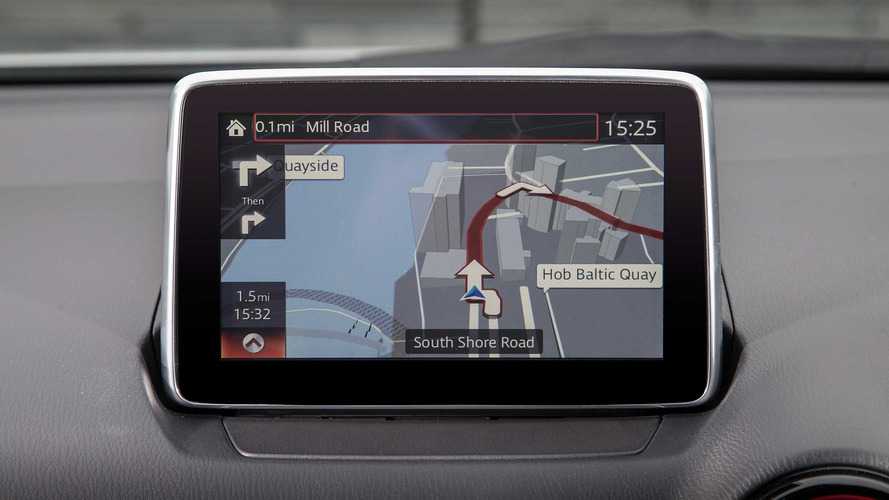 The Mazda CX-3 is loaded with tech. But naturally, the higher you climb the trim levels (ranging from SE to Sport Nav), the more you get.

All models have a seven-inch colour touchscreen with smartphone connectivity, which pairs with any Apple or Android smartphone to deliver internet and social media connectivity. The infotainment system, which incorporates DAB radio, can also be controlled using the rotary dial between the seats.

If you want a built-in sat-nav, you’ll have to opt for the SE-Nav, SE-L Nav or Sport Nav trim levels, which include sat-nav with three years’ free European mapping. 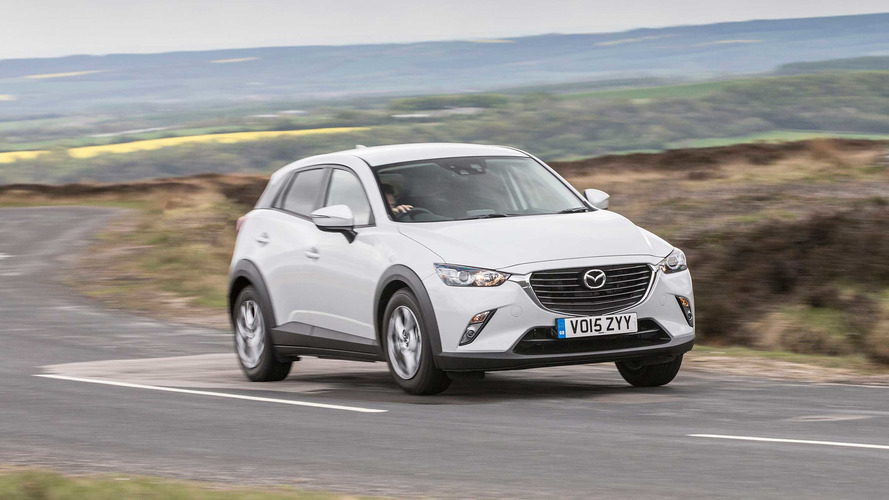 A strong, but limited range of petrol and diesel engines are available for the Mazda CX-3.

There’s a choice of two engines: a 105hp 1.5-litre diesel and a petrol unit with two power outputs (120hp and 150hp). All come with either a six-speed manual or six-speed automatic gearbox, and you can spec all-wheel drive on Sport Nav versions.

The diesel pulls well and can accelerate to 62mph in 10.1 seconds, but feels quicker. It’s pretty refined, too – except under hard acceleration.

The 2.0-litre petrol engines are a little brisker, with the 150hp version taking 8.7 seconds to reach 62mph, versus nine seconds for the 120hp petrol. Both units are lively, if a little harsh when worked hard.

The automatic gearbox is great, but Mazda has got manual ’boxes nailed, and the slick six-speeder with its short throw is a joy to use.

The CX-3 has a relatively firm ride, which won’t be to everyone’s liking. On the plus side, this means it handles well and there’s limited body-roll, so the CX-3 is definitely driver-focused. 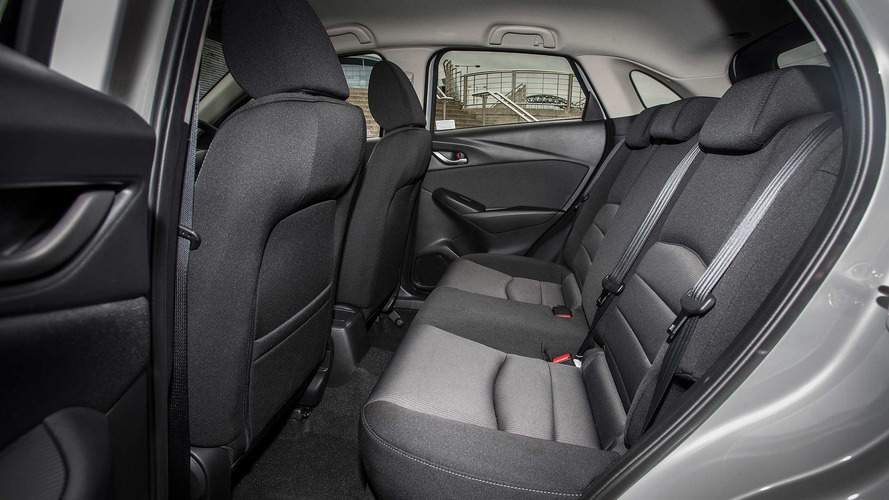 The CX-3 features lots of safety technology, but was only awarded four out of five stars by Euro NCAP after crash testing, with 85% adult and 79% child protection scores, plus an 84% pedestrian impact rating. Features such as auto emergency braking and lane-departure warning are only standard from SE-L Nav trim upwards – one possible reason for that missing safety star.

However, hill-hold assist and tyre-pressure monitoring are standard across the range, along with front, side and curtain airbags, plus Isofix child-seat anchors on the outer rear seats.

Mazda’s Smart City Brake Support (SCBS) automatically stops or reduces the speed of the car when there is a risk of a frontal collision. Using a sensor mounted on the windscreen to constantly monitor vehicles ahead at a range of up to six metres, SCBS primes the brakes to ensure instant pedal pressure if a collision is imminent. If the driver does not respond, it hits the brakes – potentially averting an impact at speeds of up to 10mph and significantly reducing the intensity of a collision at speeds up to 20mph.

Another example of driver-focused safety equipment is Mazda’s lane-departure warning system, which uses a camera mounted on the windscreen to monitor lane markings and warns you with a ‘rumble strip’ noise if you unintentionally stray into another lane without indicating.

Drivers opting for the range-topping Sport Nav can also add the £400 Safety Pack, including blind-spot monitoring and auto high-beam headlights. The blind-spot system also uses sensors to detect pedestrians, bicycles and other vehicles when reversing, displaying a visible warning in the relevant door mirror.

The CX-3 is available in nine colours, including Mazda’s signature Soul Red. However, if you’re looking for vibrant colours and personalisation options, you’re not in luck – Mazda is fairly conservative and doesn’t go in for contrasting door mirror surrounds and so on.

Whether you choose the entry-level SE/SE-Nav trim, mid-range SE-L/SE-L Nav, or the flagship Sport Nav, you will not be short-changed when it comes to kit.

The Mazda CX-3 is similar in size to the Audi Q2, Renault Captur and Nissan Juke, although shorter than some of its other premium rivals such as the Mercedes-Benz GLA and Mini Countryman.

If your journeys are relatively short and mostly local, then the 120hp version of the 2.0-litre petrol engine might be the best option. It’s capable of 48.7mpg and emits 136g/km of CO2. The 150hp version is only available with all-wheel drive, and fuel economy drops to 44.1mpg, while CO2 emissions creep up to 150g/km.

The CX-3’s insurance groups range from 13 to 19, making it slightly more expensive than the equivalent Renault Captur or Nissan Juke, while Mazda’s annual main dealer servicing can be dearer than many rivals.

Mazda, like most Japanese brands, has a good reputation when it comes to reliability. Indeed, it finished an impressive sixth in the Auto Express 2016 Driver Power survey.

The Mazda CX-3 comes with a three-year/60,000-mile warranty (whichever comes first), plus a lengthy paint and corrosion warranty.

Three-year fixed price servicing is also available from £499, or via a monthly plan. 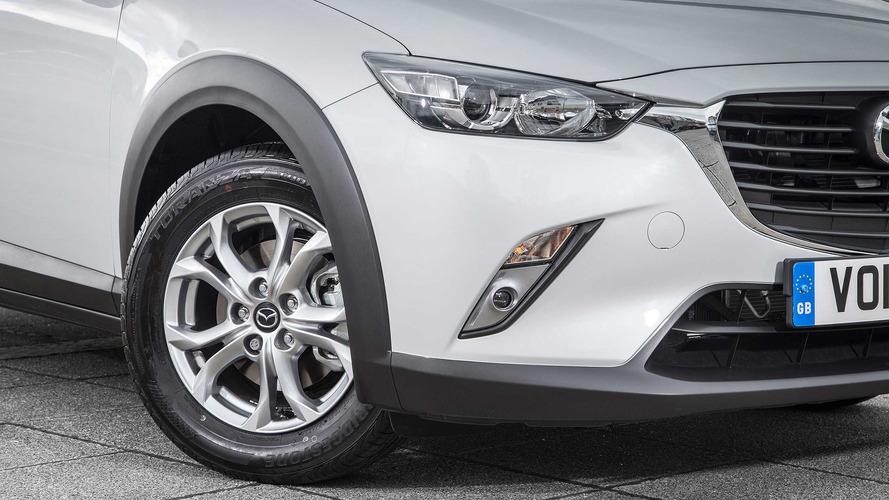 Priced from £17,795 to £24,995, the Mazda CX-3 is a little more expensive than the Nissan Juke and Renault Captur, but similar in price to the Honda HR-V and much of the Audi Q2 range.

That said, you get a fair amount of equipment even with the entry-level SE, which comes with alloy wheels, cruise control, a seven-inch touchscreen and DAB radio.