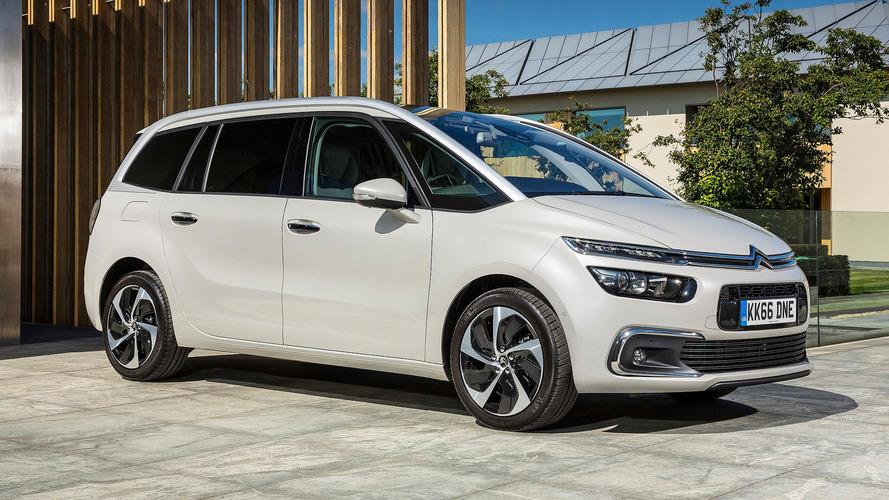 One of Citroen’s most consistently well-liked cars.

The five-seat C4 Picasso and seven-seat Grand C4 Picasso are super-practical machines that tick the MPV box to a tee. They eschew the current SUV craze in the interests of optimum practicality, and are all the better for it. Two ideal models for the tricky task of carrying people and keeping them all happy.

Did you know? Citroen pays royalties to the Picasso Administration for the rights to use the famous artist’s name.

Citroen has been building a Picasso-branded people carrier since 1999, and has constantly perfected the formula over several generations in that time.

The Citroen C4 Picasso is a people carrier that’s proud of its upright stance, deep body sides and ultra-glassy cabin. It’s not trying to be something it’s not, and the the interior benefits enormously from this, as we’ll see. That’s not to say it’s dull and formulaic, though - far from it. Like many modern Citroens, this is a vehicle that’s anything but dull.

It has a classy appearance, further enhanced by greater use of chrome trim with the 2016 facelift. It also has a distinctive front end, with split headlight units placing the LED running lights up high and the main units lower down. Black roof pillars and some contrast roof colours add to the effect - it’s an MPV with which you can have almost Mini-like customisation. The C4 Picasso is the sportier and more rakish of the two, with the seven-seat Grand C4 Picasso sporting a more upright look, but one that’s still more curvaceous than box-like MPVs of old.

Inside is where the C4 Picasso needs to do well. It does, particularly with the super-airy feel afforded by its massive panoramic windscreen, although this is tempered by the fact the overall design is starting to show its age a little: it lacks the designery flair of more modern Citroens, and isn’t as premium in feel as more modern Peugeot-Citroens. It’s better-served by the technology installed within though, particularly the distinctive centre touchscreen that’s standard on all models and masterminds most of the car’s controls. Sure, it’s rather fiddly, having to press several buttons simply to change the temperature, but it’s neat tech once you’re familiar with it.

Mounted above this screen is an excellent large-format set of digital instruments, which look great. Widescreen sat nav feeds through this panel, where fitted, and it allows everyone to see where you’re going (and how fast you’re moving). Indeed, the open-plan feel to the C4 Picasso’s cockpit is one of its most appealing aspects, something reinforced by the large glass area and brilliant forward visibility from its ultra-thin windscreen pillars.

The seats up front are comfortable, and the three chairs in the middle row are good for growing families. Each slides and reclines individually, which is a nice touch, and there are fold-up tables on the front seat backs. The third-row seats in the Grand C4 Picasso are a lot more cramped, naturally, but they’re OK for kids and Citroen has been careful to engineer in oft-overlooked details such as ample space for feet. As with all the other seats, they get their own head restraints, while their occupants are well served with cupholders and air vents.

The C4 Picasso and, in particular, the Grand C4 Picasso are designed for maximum practicality. The ingenious folding configurations of the seats are practicality personified - the base outer middle row seats springs up so you can slide it forward and open up a huge walk-through space to the third row, for example. It can also raise up to form a booster seat for children.

Seats individually fold in every which way: if you want, you can lower four rear seats and leave just the middle seat perched upright between the front seats. The third-row seats in the Grand C4 Picasso fold flat into the floor, and the middle seats also lay down flat, for a completely level van-like space.

And what space it offers. In the Grand C4 Picasso, with all the seats down, there’s an extraordinary 2181 litres of space, making it more like a van than a car. The space is well-shaped with square dimensions and plenty of width. Even the five-seat C4 Picasso has 1851 with the seats down - and 630 litres with them up. In five-seat mode, the Grand C4 Picasso has betwen 632-793 litres, depending on where you’ve positioned the sliding rear seats, but this drops to just 165 litres with all seven seats in use.

Citroen serves you well for technology and connectivity in the C4 Picasso. All models get the fancy 7in Touch Drive interface, through which is controlled the climate control, stereo and telephone. Bluetooth with media streaming is standard, as is a USB socket, and a DAB radio is controlled through steering wheel buttons. Even both Apple CarPlay and MirrorLink smartphone connectivity are included.

Move one trim up from base and Citroen throws in its Connect Box emergency contact system - if you crash, you can jab one button to speak to an operator and alert emergency services. Sat nav is standardised, as is the striking 12in panoramic HD central display. Move up to Flair and a fancy high-tech Park Assist self-parking system is standard, along with a reversing camera, blind spot monitoring and keyless go. All models get LED running lights as well.

The C4 Picasso is not a sports car in disguise. It places great emphasis, quite rightly, on ride quality. Around town, it proves supple on everyday roads, absorbing bumps with a layer of reasonably soft cotton wool and not degenerating too much until roads get really gritty. The ride is quiet as well, although at higher speeds, its tall body and supple setup means passengers can roll about a bit. Beware if anyone gets carsick.

There’s much less emphasis on handling, so it doesn’t really matter that the light steering doesn’t have much feel, and it isn’t all that eager to whip through twisting roads. Best sit back and take things steady - your passengers will certainly appreciate this, particularly those in the seven-seat Grand C4 Picasso.

Most C4 Picasso owners choose diesel, and we don’t blame them. Both the 1.6 BlueHDi and 2.0 BlueHDi are effortless and easy going, with many years’ experience of making friendly diesel engines showing in their likeable nature. A surprise alternative is the petrol engine - it sounds small, at 1.2 litres, but the PureTech motor performs surprisingly well. It’s not rocket-ship fast, but it’s almost as flexible as the diesels and is less rattly around town. Given the cash saving on offer, it’s worth at least taking a test drive.

In 2013, Euro NCAP awarded the C4 Picasso a five-star safety rating, with 86% for adult occupant and an even better 88% for child occupant. Pedestrian protection is less impressive but it scored well for safety assist - and improvements since the facelift mean it would likely perform similarly well today.

There are ISOFIX mounting points on all rear seats, standard cruise control with speed limiter, unfastened seatbelt warning on all seats and hazard lights that flash automatically if you slow down or change lane sharply. All models get rear parking sensors and all but base trim lacks front parking sensors. The top trim’s 360-degree around-view parking camera gives further supermarket car park safety, while faster-road convenience is aided by the availability of automatic headlight main beam assist.

Further optional active safety features include radar cruise control with collision alert, active lane departure warning and, yes, active blind spot assist. Every car has a coffee break warning as standard, and an optional driver alert system is also offered. You can even get a traffic sign recognition system.

It’s rather a limited range of colours for the C4 Picasso: there are only seven, and four of them are very sobre: Shark grey, Cumulus grey, Soft sand and Onyx black. More vibrant is Polar white, but the two most attractive colours are Ruby red and the gorgeous Lazuli blue. You can combine them with a black roof and door mirrors for a fancier look.

Interior colours include norma Slate grey with either cloth or half-leather, a richer Dune grey and a very avant-garde Levanzo blue cloth. You can’t get full leather in a C4 Picasso.

Flair is very well-equipped indeed. It has 18-inch wheels, panoramic sunroof, reversing camera, keyless-go, part-leather seats, blind spot monitor and a front passenger seat that has extra fold-out panels so you can recline it like an aircraft seat. There’s even built-in massaging.

The Grand C4 Picasso is longer and a little taller than the C4 Picasso. That’s because it has a longer wheelbase, which liberates more space for those in the back. They’re the same width though. Towing weights range from 640kg for the 1.2-litre C4 Picasso, to 750kg for the powerful 2.0-litre BlueHDi.

Fuel economy is eyebrow-raising. The petrol averages up to 56.5mpg in 130hp guise, even in Grand C4 Picasso form. As for the diesels, how economical do you want your people carrier? Take a C4 Picasso 1.6 BlueHDi 120 and official combined economy of 74.3mpg is yours, combined with CO2 emissions of just 100g/km. Bigger wheels will knock a few mpg off that, but it’s still impressive. Even the automatic 2.0-litre BlueHDi will averages up to 65.7mpg.

Citroen has long been able to do better in this area, but its latest cars show it is at least getting there. The well-proven C4 Picasso is decent for dependability, though we’d perhaps avoid the top-spec Flair for ultimate long-term reliability, given all the fancy electronics fitted to it.

Base petrol-engine C4 Picasso are very competitively priced. You can get a 1.2 PureTech 110 Touch Edition for just over £20,000 - that’s Ford Focus five-door hatch money. We prefer the Feel trim, mind, and that forces an upgrade to the 1.2 PureTech 130: it’s yours for £22k. Need seven seats instead of five? The Grand C4 Picasso costs around £1500 more. 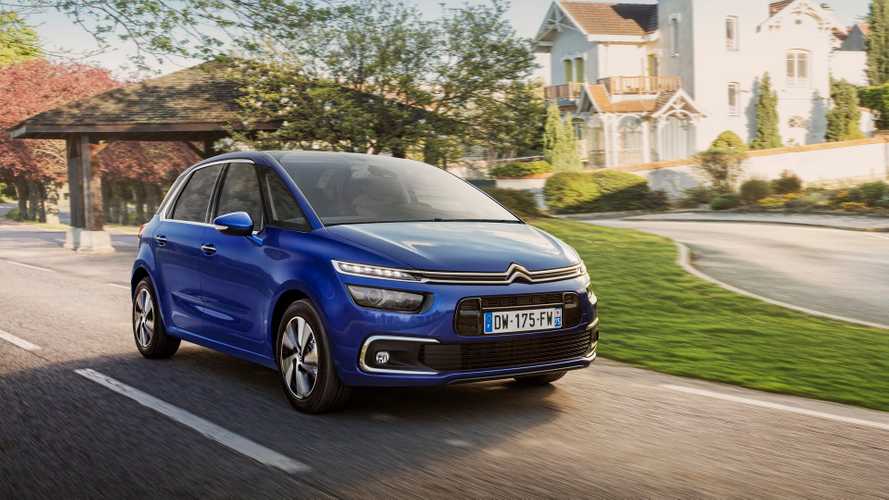