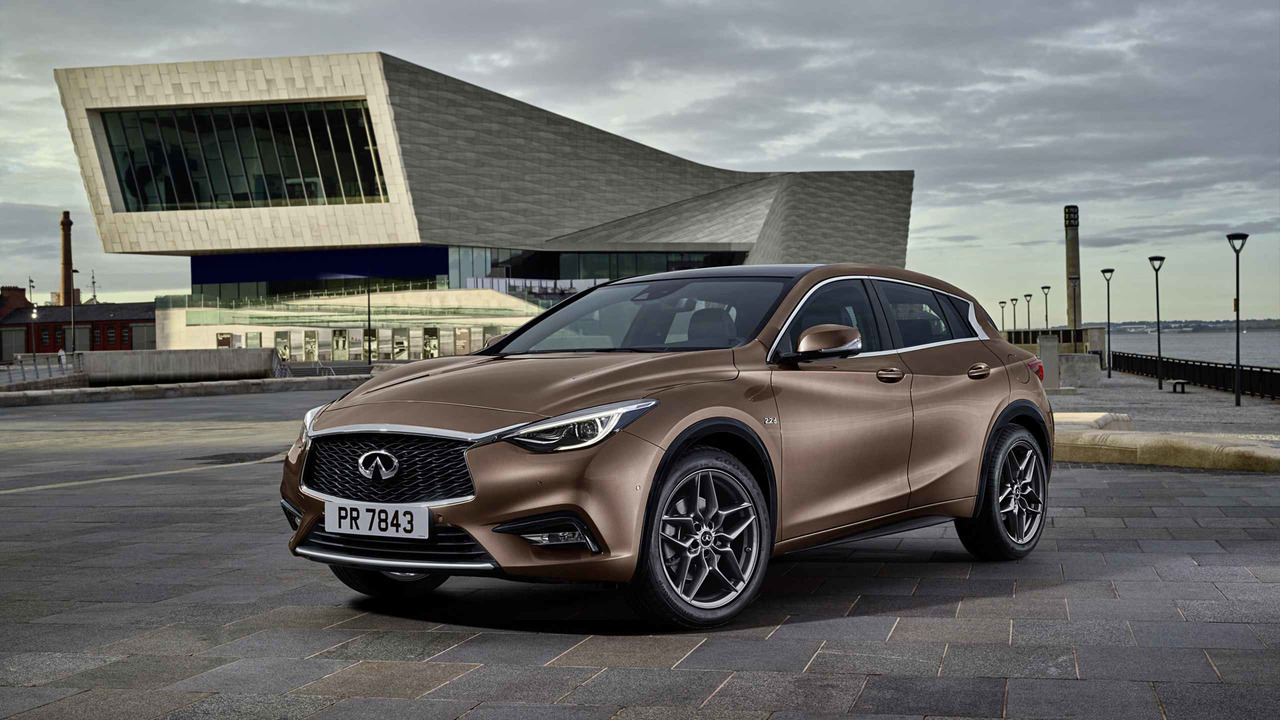 You could be forgiven for not having heard of Infiniti, the Japanese entrant in the premium marketplace yet to make a big impact against the Germanic norm. The Q30 is the car that aims to change that, not least as it competes in the big volume compact hatchback sphere, which puts it up against the BMW 1 Series, Audi A3, and Mercedes-Benz A-Class, as well as some mainstream models in higher trim specifications. That Mercedes-Benz is particularly relevant, as underneath the Q30’s extravagantly designed exterior it borrows a great deal from the Mercedes, as part of the Daimler-Renault/Nissan alliance - Infiniti is Nissan’s luxury brand. It’s a decent choice in the class then, but others do better, making the Infiniti a left-field entrant for a brave few early adopters daring to go for something different.

Did you know? The Infiniti Q30 might be largely based on the Mercedes-Benz A-Class, but it’s built at Nissan’s plant in Sunderland, here in the UK.

Bold exterior styling and an as-yet largely unknown brand make the Infiniti Q30 a brave choice against the established norm. Infiniti has hedged its bets with the Q30, borrowing heavily from Mercedes-Benz to create it, which begs the question: why not just buy the Benz - or any of its rivals instead? It’s a bit softer riding than its German relation; however, it carries over some of the Mercedes-Benz’s shortcomings, specifically tight interior space in the back, and the parts sharing inside screams Mercedes-Benz - Infiniti’s changes do not go far enough to differentiate the two. If there was a good financial incentive to forgive that the Q30 would be worth considering, but running costs will be the same, if not more expensive thanks to uncertainty over residual values, and you’ll be forever explaining to people what it actually is, which, given it competes in a market where image and brand are everything, is a bit of a problem.

Talk about making an impact: Infiniti bucks the relatively safe and conservative convention in the premium hatchback sphere with the Q30. It’s a riot of crisp lines, swooping curves, and bold grilles; shy and retiring it is not, but then to be seen that’s arguably exactly what Infiniti needs to do. Indeed, it's so bold it falls into the 'love it or loathe it' category, and it is certain to split opinion, but that’s kind of the point. If you want it at its most extrovert you’ll need the Sport model, which gains an even more dramatic front bumper, grille, and side skirts on its already heavily-sculpted flanks. Park the Q30 alongside an Audi A3 and the German car won’t get a look in.

If you’ve sat in a Mercedes-Benz A-Class you’ll recognise a lot of the switchgear in the Q30. There’s been some attempt to add some Infiniti individualism, but it’s not really worked, which, given the drama of the exterior, is a bit disappointing. Comfort levels are a touch better than the Mercedes-Benz it’s based on though, which is chiefly down to Infiniti having its own, softer riding, suspension settings. It all feels of high quality inside, even if those familiar, sensible Merc switches are rather at odds with the Infiniti’s otherwise gregarious nature. It’s all a bit like finding M&S underwear under a partner’s couture dress or sharply tailored suit: sensible, but, ultimately, rather disappointing.

Being based on that Merc platform also brings with it some compromises, particularly related to passenger space. Room in the back is tight for, with limited leg- and headroom; it's fine - just - for children, but cramped and uncomfortable for adults. The boot holds 430 litres of luggage conventionally, which is bigger than most of its rivals, with a 60/40 split folding rear seat for bigger loads. Drop those rear seats and the load space isn’t flat, but it’s useful enough for most buyers' needs.

All Q30s come with a seven-inch infotainment screen that operates all the audio and information functionality, though, rather oddly, the radio remains FM/AM as standard, DAB only coming with cars equipped with satnav or as a cost option as a part of the City Black or InTouch packs. There’s voice recognition and Bluetooth connection, though keyless entry and push-button start are limited to upper models, likewise, some of the more desirable options - like a rear view camera with front and rear parking sensors with display are limited to the most expensive versions like the Q30 Premium Tech. A decent tech offering as standard, but not quite as comprehensive as standard as some of its competition.

The engine line-up comprises of a pair of diesels and a pair of petrol units. All are turbocharged and the 1.5-litre turbodiesel that introduces the diesel range is borrowed from Renault, developing 109hp. It’s not particularly quick, and working it hard to get anything approaching good performance does somewhat exacerbate its other shortcoming - refinement. The trade-off for that though are the cheapest running costs, as it uses the least fuel and emits the lowest CO2, which helps keep your tax bill low, even if it’ll take you longer to get to your accountant than in the 2.1-litre turbodiesel. The larger diesel comes from Mercedes-Benz’s stock, which might sound ideal, but in truth it’s a bit of an old nail in comparison to BMW's and Audi’s similar output engines. Mercedes-Benz itself in the process of replacing this engine in its model lines. Refinement isn’t a strong point, even if it gains a useful boost in urge - shaving almost four seconds from that 1.5-litre turbodiesel’s 0-62mph time.

The petrol engines fare a little better, the choice being 1.6-litre or 2.0-litre. Both gain significantly in regards to refinement over their diesel alternatives, but lack some of the low-rev urgency they have. That’s particularly true of the 1.6 turbo, which seems to deliver its power in an all-or-nothing fashion, requiring your foot pinned to the firewall for anything much to happen. The 2.0-litre (also turbocharged) addresses this, and is the quickest model in the range - its 7.2-second 0-62mph time is over a second quicker than that of the 2.1-litre turbodiesel.

Not that the Q30 feels like a car that’s all about performance. The chassis errs towards comfort, as the suspension is soft and forgiving, if at the expense of outright control. Enter a corner and there’s some lean, but it’s not too unsettling, just unusual in a class seemingly obsessed with ‘sporting’ suspension. There’s decent grip and traction too, while the more powerful models are offered with the option of four-wheel drive if you feel you need it, while all can also be had with a swift, dual-clutch automatic transmission in place of the standard six-speed manual gearbox.

Crash tested by Euro NCAP, the Q30 gained a full five-star rating, with 84 percent for adult occupant protection, 86 percent for child occupant, 91 percent for pedestrian, and 81 percent for safety assist. Helping with those scores are the standard fitment of ABS with electronic brake force distribution, traction control, stability control, and forward collision warning and stop. There’s a tyre pressure monitoring system, adaptive brake assist, and seven airbags as standard, too. Climb the range and there’s additional kit like lane departure warning, as well the option to add a pair of safety packs, which include Blind Spot Warning and Intelligent Cruise control.

Four trim levels include the standard Q30, Q30 Premium, Q30 Premium Tech, and Q30 Sport. To those brochure listed trims you can add a couple more via Infiniti’s online configurator, with SE and Intouch versions of Premium Tech and Sport, these basically adding Infiniti's Intouch navigation system (and that missing DAB) to the specification.

On paper the Q30 looks to be able to get close to the best of its rivals, but the mpg and emissions figures only tell part of the story. The best is a manual 1.5 diesel, on the smallest wheels, which has CO2 emissions of 103g/km and an official combined economy figure of 72.4mpg. The reality will be at least 15-20mpg less than that and, if you opt for larger wheels - which come as standard higher up the range - the Q30 will emit and consume more. The biggest issue relates to residual values. Infiniti remains a difficult proposition in the used market - at least in comparison to its German rivals - so it’s likely to be worth less after the same ownership period as them.

Some rivals offer longer intervals, though costs should be reasonable.

With an extensive range covering an attractive circa £20,000 starting point up to nearly £34,000 there’s plenty of choice, so the Q30 is cheap enough to pull buyers in from the mainstream class and also has enough breadth in the range to compete with premium models. The standard equipment is good in all, with the exception of that DAB oversight, though it’s only a good car in a class where great isn’t unusual, which does make it look a touch expensive.